HyperX has made a name for itself with its gaming headsets, so when it announced its first-ever standalone streaming microphone at CES 2019, my ears perked up. A dedicated mic is a very different beast from a gaming headset but having enjoyed so many of their other products, I was curious to see what a HyperX microphone would offer. Priced at $139 (See it on Amazon), the HyperX QuadCast is pricier than some of its more established competitors, like the Blue Yeti or Samson G Track Pro, but it also offers features the competition doesn’t. Did HyperX get it right with its first mic out of the gate and, more importantly, is it worth the extra money? I’ve spent the last week putting it through its paces to find out. 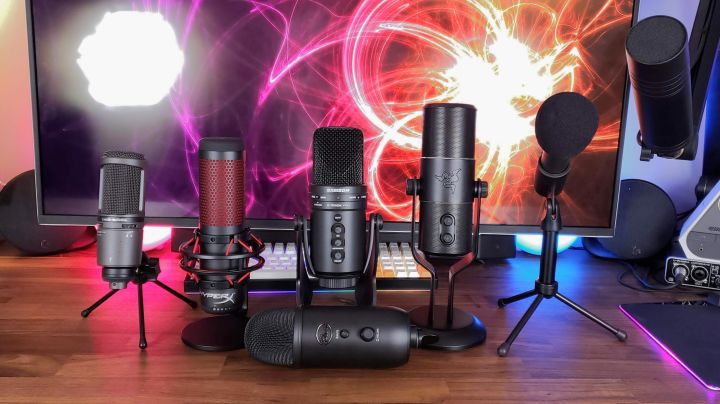 The body of the microphone is metal, which is good for its long-term durability and feels solid. The top and bottom of the cylinder are capped in fingerprint-resistant rubber and are each functional elements of the QuadCast’s design. The top acts as a touch-sensitive mute button. The bottom controls the gain of the microphone (the volume of the microphone being sent to your PC).

Despite how it appears at a distance, the microphone capsules are actually enclosed behind a black honeycomb grill, inside of which is a bright red pop filter that unfortunately doesn’t do much to stop plosives, but it does have one trick up its sleeve. 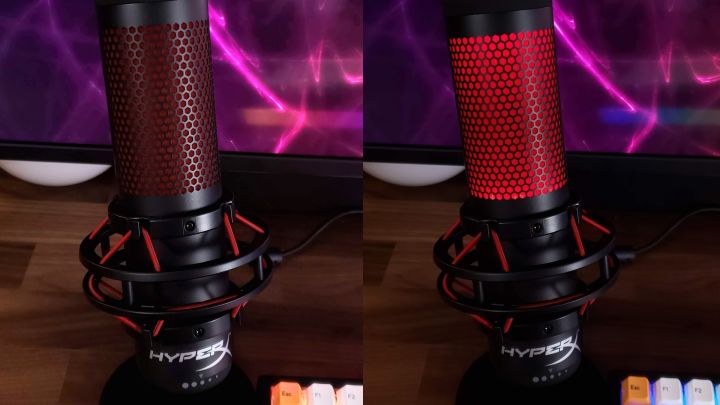 The most visually striking element of the microphone is its bright red illumination when the mic is live and recording. Simply tapping the top mutes the mic and turns off the light. While I’m sure some people will find this light distracting, I didn’t. The glow is clearly visible due to its size but restrained in its brightness. It’s a functional and stylish cue that can save you from saying something live to your stream that you meant to say in private.

The shock mount features a classic elastic band design. Bright red bands suspend the microphone inside the mount’s outer ring, absorbing minor vibrations from your desk. It works better than the basic metal stands included with most USB microphones, but I’d still recommend swapping it for a boom arm for two reasons. First, you’ll more easily be able to position the mic closer to your mouth; and, second, while the shock mount helps with vibrations, it does nothing for the noise of clacking keystrokes or clicking mouse buttons. A little extra distance from the desktop and better positioning can definitely help. 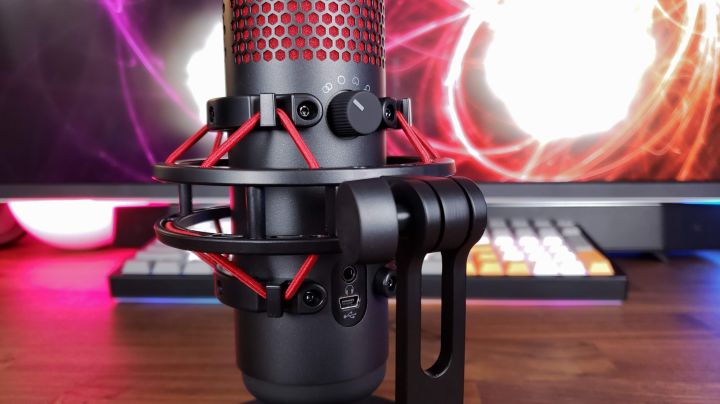 Around the back of the mic there’s a polar pattern selector, a headphone jack for latency-free monitoring, sound passthrough from your computer, and a USB connection. Hidden behind the bright red foam are three small-diaphragm condenser microphone capsules carefully positioned to allow you to record across four different polar patterns. Put simply, these are the directions in which the microphone will accept or attempt to reject sound and are visualized in the pictures above the knob.

From left to right, we have: stereo, which accepts sound from the left and right; omnidirectional, which records from all directions and is great for recording live events; cardioid mode, which records only from the front of the microphone making it the go-to choice for streaming and voice over; and bi-directional, front and rear recording, ideal for interviews. You can swap between these modes on the fly but the knob is good and stiff with an audible click, so you won’t be changing it by accident. If you’re like most broadcasters, you’ll set it to cardioid mode and leave it there, but I love the additional versatility the QuadCast offers; it’s a feature quickly being left behind by companies like Razer with its new Seiren X and Elite microphones.

Don’t make the mistake of ignoring the headphone jack either. Being able to monitor your volume is extremely important to make sure you’re not clipping or too quiet. Likewise, inadvertently moving away from the mic can drastically change the character of your voice which you simply wouldn’t know without active monitoring. Thankfully, the QuadCast can also act as a soundcard and send all of your PC audio straight through this jack, so you won’t be losing anything except the ability to use a USB headset. The sound quality is also very good. To my ear, in-game audio was indiscernible from connecting to my motherboard’s audio.

What’s missing here is any kind of volume knob for your PC’s audio, which means you’ll have to use Windows to control your in-game volume and that’s something I really would have liked to have seen at this price. 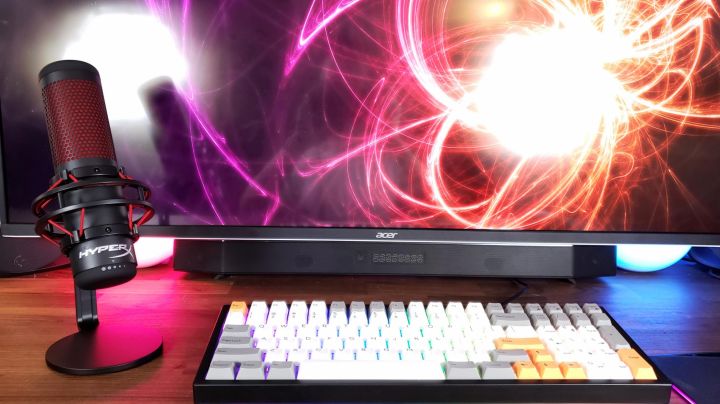 On paper, the QuadCast has it where it counts. It’s able to capture at a sample rate of 48kHz with a 16-bit depth. This is equivalent to the Blue Yeti and AT2020USB+ but falls below mics like the Samson G-Track Pro. Practically speaking, most users would be hard pressed to hear any difference between 16-bit and 24-bit vocal recordings, but on a purely technical level, the QuadCast falls in the middle of the pack for premium USB microphones. It also features a frequency response range of 20Hz – 20kHz, which is widely accepted as the range of human hearing, so it’s safe to say that it will accurately capture anything a streamer would care to throw at it.

One thing HyperX doesn’t disclose is its noise floor. This is an important factor in any microphone because it represents how much white noise the microphone itself will generate even in a completely silent room. Ideally, you want the noise floor to be as low as possible to cut out any annoying hiss from your stream. Even without a hard number to go on, I found that the QuadCast can be remarkably quiet. In the sound samples I collected, it was on par with the Blue Yeti and easily more quiet than the Audio-Technica AT2020USB+, which is also a popular streaming mic. It does have to be properly configured, however, which can be a bit tricky if it’s your first time with a premium desktop mic.

The HyperX QuadCast is a plug-and-play microphone that requires no software and Windows 10 immediately recognized it after plugging it in. Seeing the gain knob on the bottom of the microphone, it would be reasonable to assume you should turn the mic’s Windows volume up and then use the built in gain knob for volume control. Doing so creates so much white noise that the mic is virtually unusable, even when the knob is turned down. Instead, through trial and error, I found that setting Windows volume to about 60 percent and the QuadCast’s gain to 50 percent was the sweet spot pushing out white noise while still getting a proper recording volume for my voice. It would be helpful for HyperX to offer some advice beyond the steps for physical setup in the Quick Start guide, but they’re sadly absent. 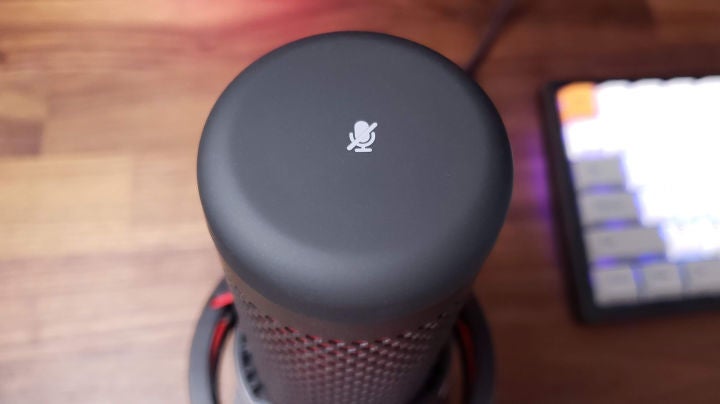 So how does it sound? Simply put, the HyperX QuadCast is one of the best sounding USB microphones I’ve used to date, and I’ve used almost all of them. The microphone is clearly tuned to capture the spoken word and has a warmth to it that’s perfect for voiceover or talking through a stream. It brought out the natural bass in my voice, which shows that HyperX has slightly raised its low-end responsiveness. Unlike a mic like the Blue Yeti, it doesn’t squash the mids, which allowed my voice to retain a crispness that’s more true to life. Treble, for a male voice, is less prominent in spoken word recordings but in recording multiple subjects, does appear slightly rolled off. If you have a higher pitched voice, you may still find the QuadCast sounds a touch sharp which is helped by scaling down the gain.

I did a side by side comparison with the QuadCast, the Blue Yeti, the Audio-Technica AT2020USB+, and the original Razer Seiren. Each mic was set to record in a cardioid polar pattern and balanced to provide level volume across the board. It’s important to note that a microphone’s character is often dramatically reduced when positioned too far away from the speaker, so I recorded each from the same 4-inch distance to allow their unique characteristics to shine through and to test the proximity effect, or radio voice, produced by each.

Compared to the latter two, the QuadCast sounded much warmer and more full. While the AT2020USB+ and Razer Seiren’s captures may have been “truer to life” in with their more flat, neutral responses, the QuadCast is more in line with broadcast mics which slightly boost the bass and roll back the treble to give the speaker a more prominent voice. 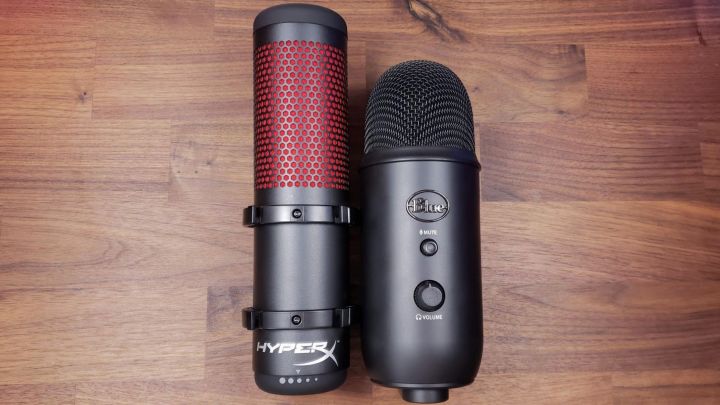 Compared to the Blue Yeti, I found the two very close. Both mics are quiet, warm, and full. The key difference is that the Yeti scales back some of the crispness found in the QuadCast. While both mics offer crystal clear recordings, the QuadCast doesn’t scale back the mid-tones as much which adds more realism to the capture and increases its capability in capturing sources that aren’t the spoken word, like live music. That said, I did find it to be quite a bit more sensitive to plosives, so you’ll want to invest in an aftermarket pop filter to avoid distorting your recordings.

Given that the Blue Yeti is a clear favorite among streamers and one of our Best Streaming Microphones of 2019, that the HyperX’s first attempt at a streaming mic is a real challenger is impressive. Yet, depending on the color, the Yeti can be purchased on Amazon for $98-129 while the HyperX QuadCast comes to market at $139.99. That kind of premium is enough to make me pause and isn’t worth it on EQ alone. The inclusion of a shock mount and wider compatibility with aftermarket boom arms definitely add some value, but the QuadCast would be an easier recommendation if it were even $10 less.

The HyperX QuadCast has an MSRP of $139.99 and is the same price on Amazon since it just launched. 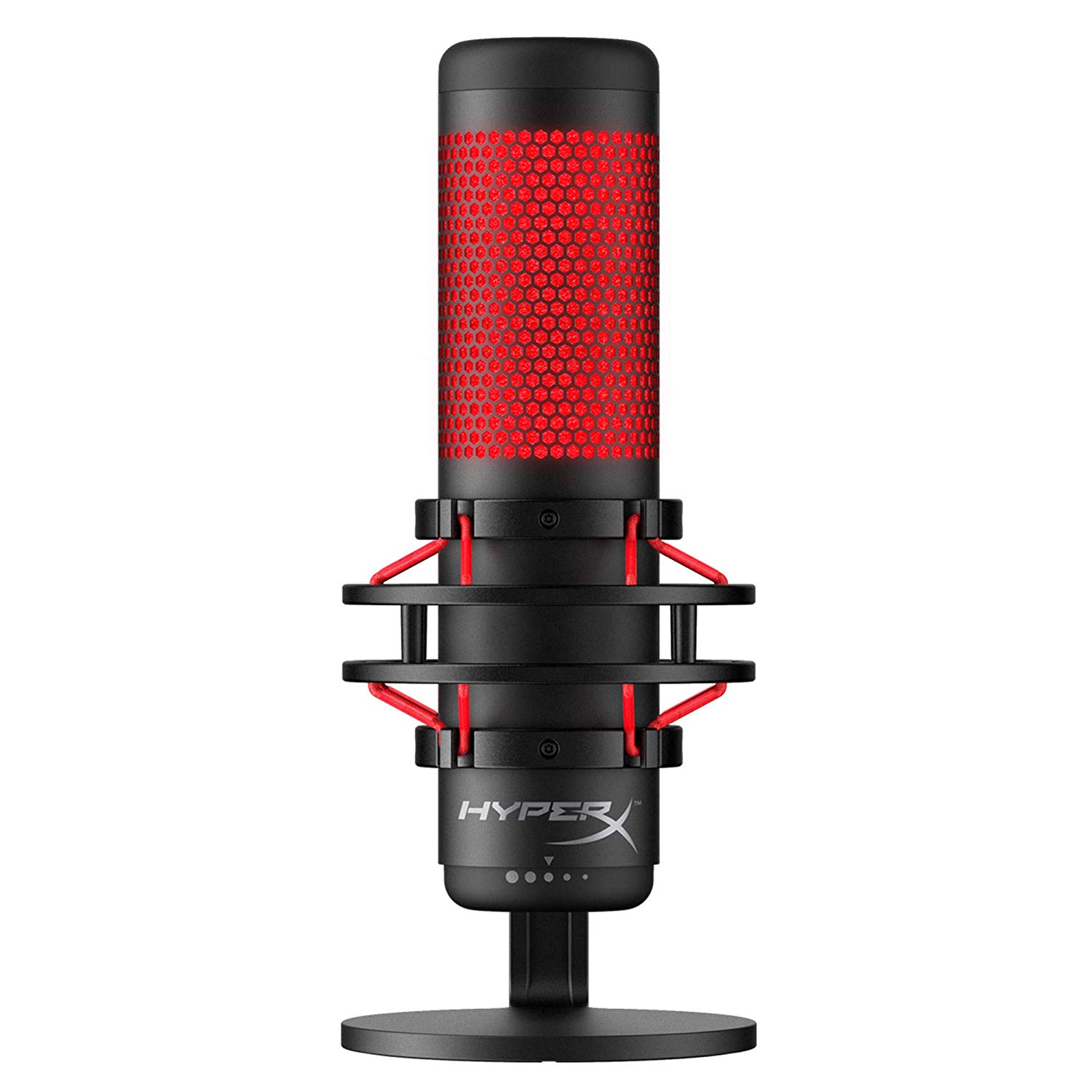 Though the HyperX QuadCast is kind of pricey, there’s no denying that it’s an outstanding microphone for streamers. I was very impressed by how clear and quiet my audio captures were, and also by its standout features like the touch-to-mute cap, included shock mount, and stylish design. It’s definitely a step up from most of the midrange microphones on the market today.