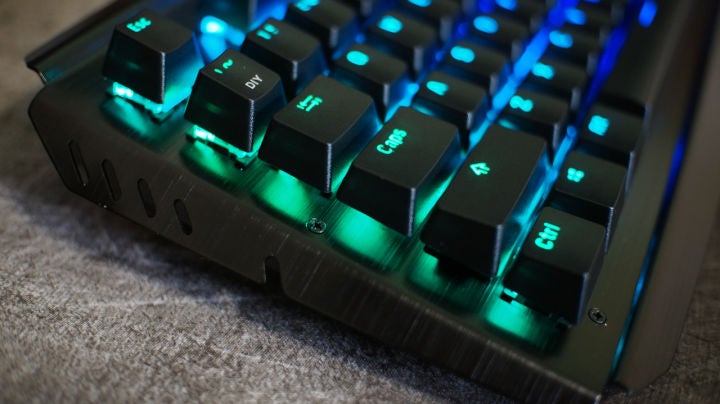 That’s not to say it’s perfect. Many secondary functions, like media controls and backlighting controls, are simply printed onto the keycaps and get no backlighting. And the main number row shrinks down numbers and symbols to fit them side by side while also using an unusual character style (there are no completely closed lines. i.e., there’s an opening at the top of the O, B look like L and 3 pushed together, 6 looks like G, etc.) that makes them tricky to identify immediately. 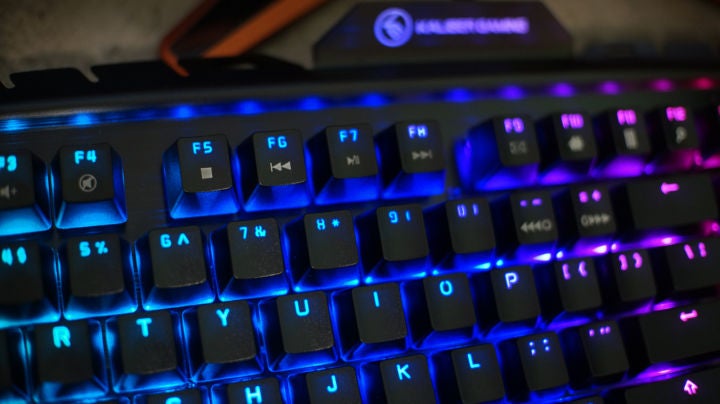 The HVER Pro RGB has customization software, but it’s tricky to use. Instructions are lacking and the UI is really plain. Customizing the polling rate is easy enough, and switching between RGB styles is straightforward. But, it took some trial-and-error to figure out how to choose colors on a per-key basis.

The software also allows macro creation and assignment. The interface is bland, but effective, allowing the creation or recording of macros. Delay can also be adjusted, though manual setting of delay is limited to 10ms increments. However, anyone who doesn’t need per-key lighting control or macros won’t need to use the software at all since most of the lighting settings are controllable directly on the keyboard.

I was a little surprised when I first started using the HVER Pro RGB. The Brown-style key switches felt off at first, like there was something jammed underneath the key. That’s because the actuation point’s tactile bump feels large but not as pronounced as that of a Blue key switch, kind of like going over a speed hump instead of a speed bump. The pressure past the actuation point also feels greater than before it. 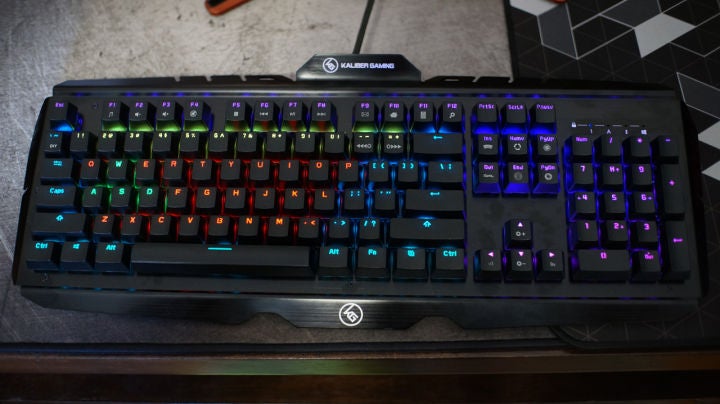 While that felt unusual for about a day, I found it incredibly easy to adapt to and surprisingly comfortable afterward. I found each click felt responsive, and the greater feeling of resistance past the action point helped me keep from bottoming out on every key press. My fingers never felt sore after an hours-long sessions, and the typing was a little quieter (still noisy, though) than I’ve experience on some Cherry MX Red keyboards like the SteelSeries Apex M750. 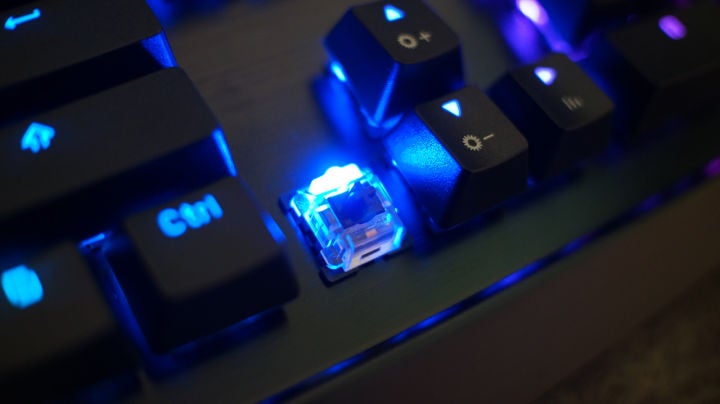 I put in probably 15-20 hours of Apex Legends with this keyboard, and had some of my best games. Quickly tapping from side to side helped me dodge plenty of shots from enemies, and every time I pressed E in rapid succession to pick up loot, I found myself nabbing everything I went for. Inputs are registered promptly with the 1000Hz polling rate, and its full N-key rollover and anti-ghosting ensured there were no false or missed inputs.

One day that I played maybe 10-12 matches of Apex Legends, I won 7. Never once did I experience any issues with the HVER Pro RGB. The modestly contoured keycaps helped keep me from slipping onto the wrong keys. As far as gaming keyboards go, this one does the job. And, even though the brown key switches have that curious actuation point changeup, they were reliable. They have minor wobble, which is typical of just about every mechanical keyboard with Cherry-style switches that I’ve used.

They only key where I noticed an odd bit of play was the right shift key, as pressing on the far right side of it would create a bit of extra resistance. Nowhere else suffered from this though. All the other keys have a consistent-feeling travel regardless or where they’re pressed.

The IOGear HVER Pro RGB is usually around $80 on Amazon. 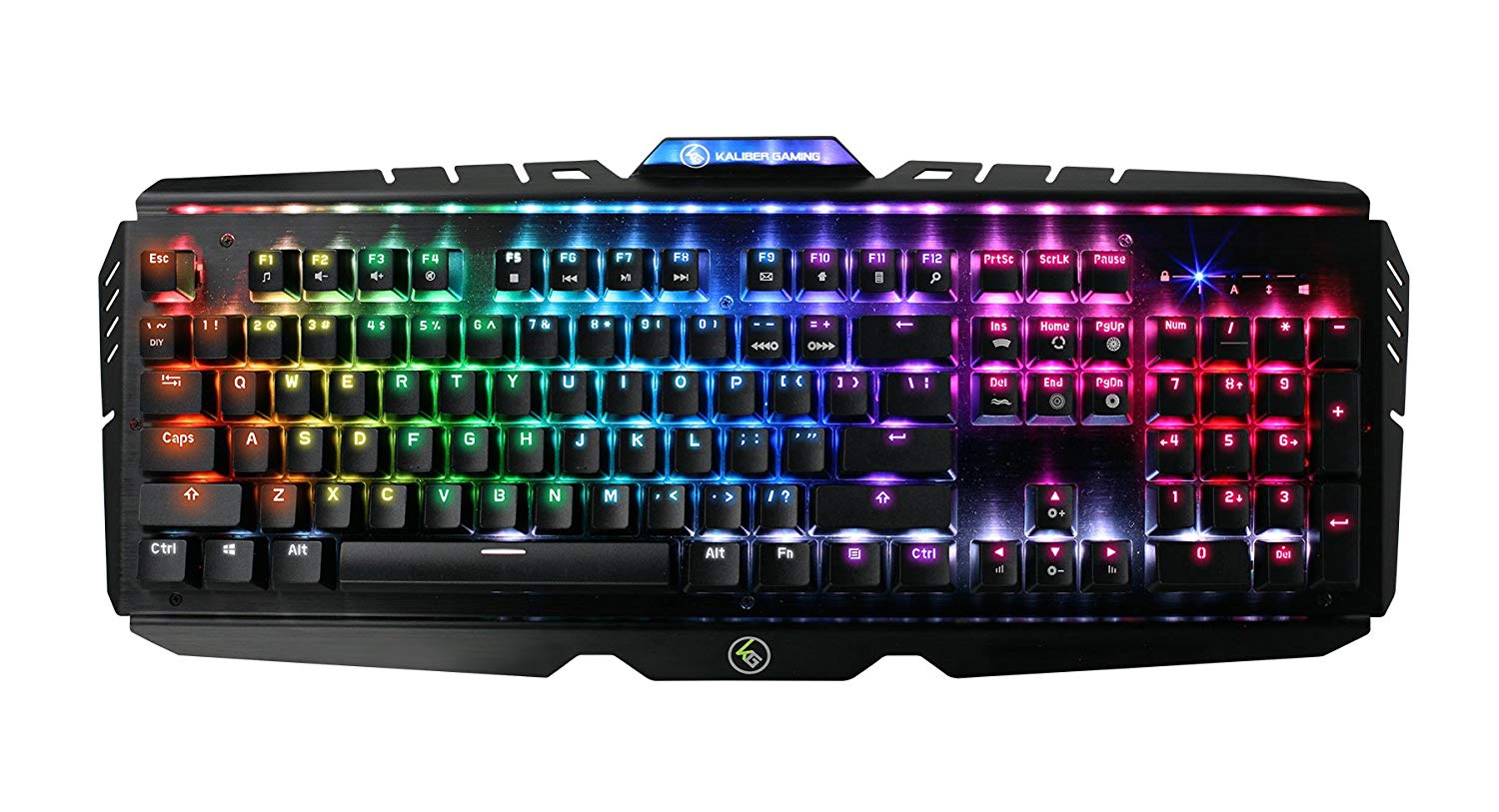 The HVER Pro RGB does something surprising: it offers a sturdy design with premium materials and mechanical switches with per-key RGB lighting at an affordable price. While the aesthetics may not be for everyone and the keycap characters are kind of weird, it’s still a great value.