Over the past couple of months I’ve tested two laptops equipped with Nvidia new RTX GPUs; one with an RTX 2080, and one with an RTX 2060. These laptops were impressive, but I’ve been eager to get my hands on a laptop with the mid-tier RTX GPU, the RTX 2070, just to get an idea of how the three different GPUs stack up.

Luckily, I now have Lenovo’s Y740-15ICHg in-hand (See it at Lenovo) and it has an RTX 2070 Max-Q in tow. The particular unit I received is the top model on Lenovo’s site and the only model with an RTX 2070. The rest of the lineup features the RTX 2060, ranging in price from $1,679 to $1,919. The entire lineup is priced competitively when compared to the previous RTX-equipped laptops I’ve tested.

I like having all of the ports on the backside of the laptop, for no other reason than it looks cleaner when you have multiple peripherals and accessories plugged into the laptop. Instead of having a couple of cables coming out of either side, everything can be arranged neatly behind the laptop, where the display blocks your view of the mess, meaning it doesn’t really exist.

The touchpad has two physical buttons just below it and is centered within the housing, just below the individually lit RGB keyboard. I found the touchpad easy enough to use but I had to reorient myself to having to click physical buttons for left and right click. To the left of the keyboard is an extra column of buttons that serve as shortcuts to launch Lenovo Vantage for managing your PC, along with screen recording tools, customizable shortcut keys, and keyboard lighting controls. 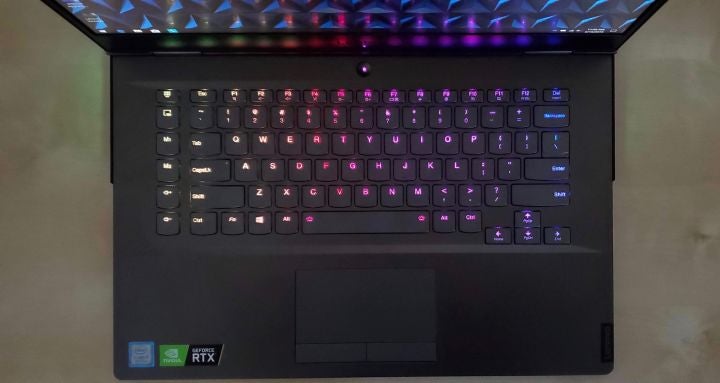 An extra column of keys seems innocent enough until you find yourself accidentally pressing the Vantage launcher key instead of the Escape key in the middle of a game a dozen or so times. I would much rather have the shortcut keys above the keyboard.

The keyboard and Legion logo aren’t the only places you’ll find RGB lighting. The cooling system vents, one on each side as well as two on the back, all light up. In a dark room, the Legion Y740 looks pretty damn cool when it’s all lit up.

There’s not a whole lot pre-installed on the Y740. There’s the previously mentioned Lenovo Vantage, Corsair iCUE, and McAfee LiveSafe. So it’s close to being bloatware free.

McAfee is annoying as ever but easy enough to uninstall, but do they seriously have to passive-aggressively interrupt my gaming sessions with alerts reminding me how much longer I have left in my trial? The only way to close the prompt is to click a button labeled “Accept risk.” But I digress. 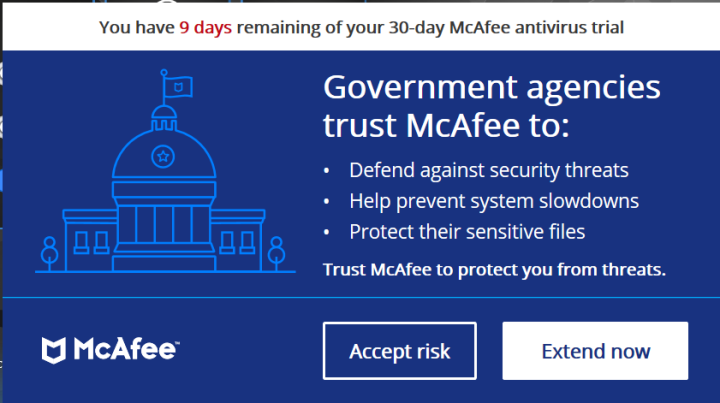 The Vantage program is used to view system stats, check for driver updates, view battery health and change power modes, and optimize the system, among other things. I used Vantage a few times to check for and install driver updates, and view system stats. It’s useful, sure, but it’s also full of ads for the Legion game store. I could do without ads in a system program. 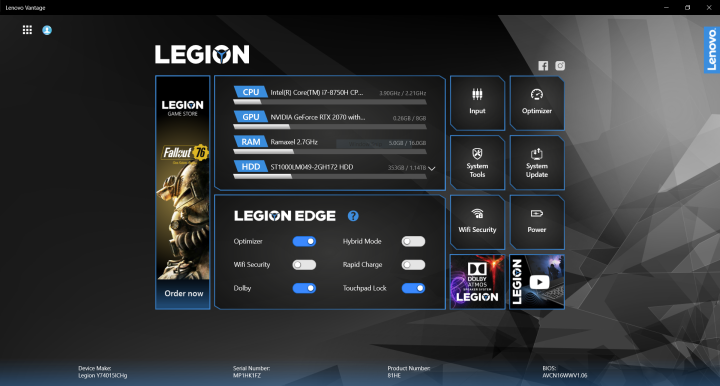 With Corsair iCUE you can control the laptop’s RGB lighting schemes. There are several different profiles and themes already set up. As with most keyboard lighting programs, I found iCUE to be confusing to use. There’s not a clear and concise way to add themes specific to a game. Or if there is, I couldn’t find it. 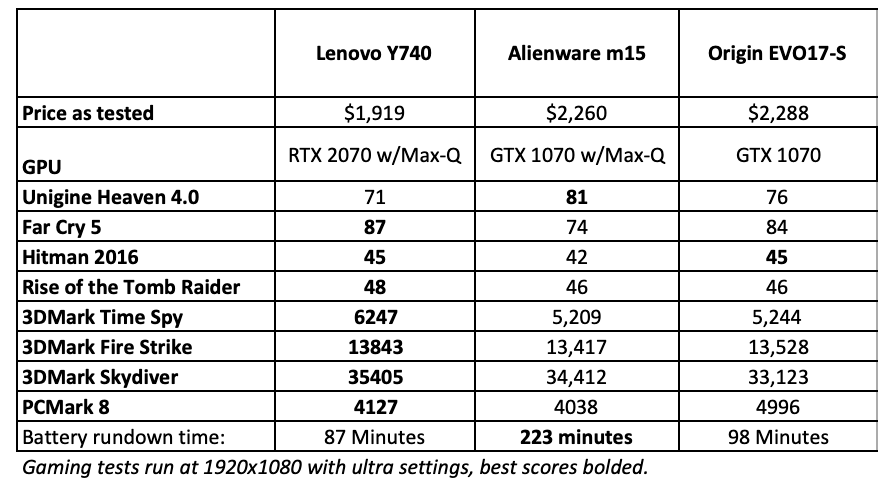 Comparing the RTX 2070 to the GTX 1070 series GPU shows the performance gains it offers with slight improvements throughout my series of tests, save for Unigine Heave 4.0. It’s not massively faster in most titles, except for in Far Cry 5.

With the Max-Q version of the RTX GPU inside the Y740, Lenovo is able to tune the overall performance to their specifications. Using GPU-Z, it appears Lenovo has tuned the Y740 to 855MHz for its base clock, and the boost speed is tuned to 1,185MHz out of a potential 1,500MHz, so Lenovo was a bit conservative with this model. Here’s how it compared to laptops with the RTX 2060 and RTX 2080. As you can see the RTX 2080 is significantly faster than its lower-clocked cousins. 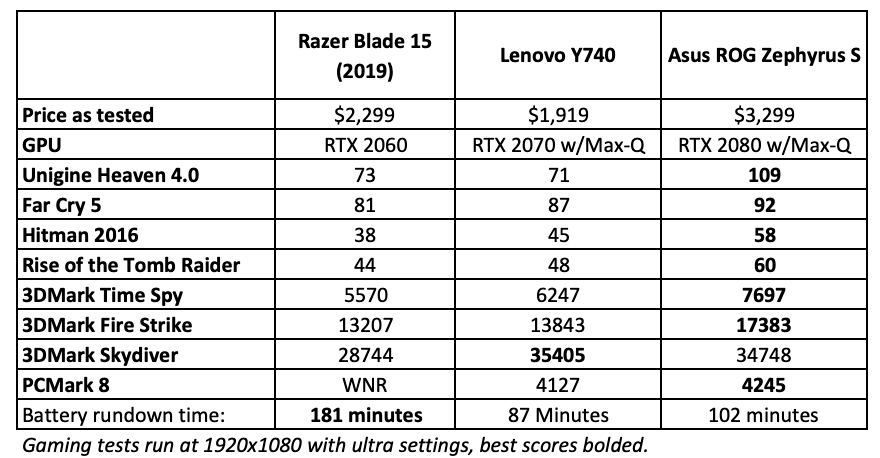 For real-world testing I played a few matches of Fortnite with graphics set to Epic and experienced a consistent frame rate of 120-130 FPS. As for Apex Legends, with nearly everything set to high, I saw frame rates level out around 95 FPS, with the occasional spike up to 120FPS.

Battlefield V supports the RTX-series’ real-time ray tracing, a feature that makes graphics look incredibly lifelike. With DXR set to Ultra, the Y740 hovered between 80 and 90 FPS at 1080p without issue. 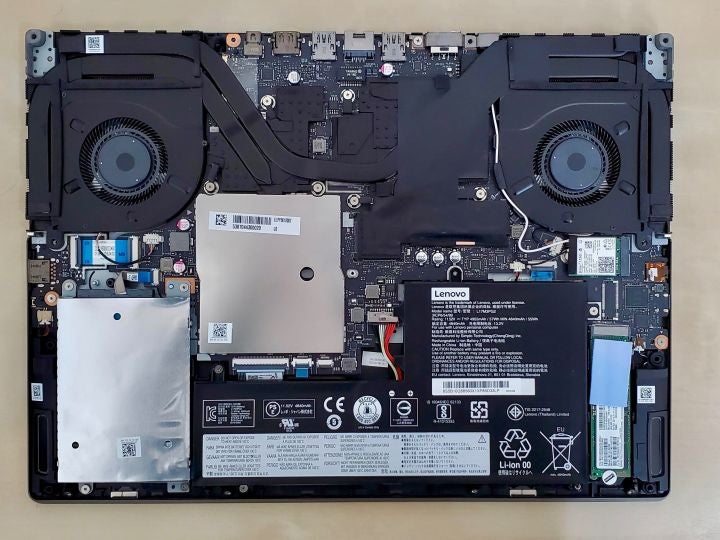 Remember, all of these numbers are under observed under a heavy load. Tweaking a setting here and there will increase the overall FPS, getting you closer to the 144FPS to take full advantage of the 144Hz display. At 300nits, the Y740’s display is plenty bright, translating into more vivid colors and sharper graphics to my eyes.

Outside of my earlier gripe about the added column to the keyboard layout, I found the keyboard to be easy to use no matter what task I was working on. There’s a bit of wobble to the keys when you press on the corners of them, but it’s nothing that impacts performance. 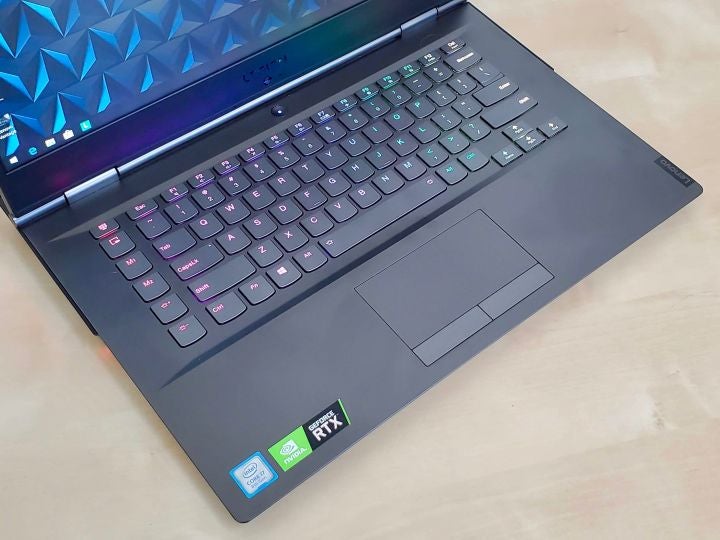 The speakers on the Y740 are loud and clear, even at low volumes. When the fans kick into high gear, they are on the louder side of laptops I reviewed. However, I would rarely have to turn the volume past a setting of 50%.

When looking at the lineup, I do wish that Lenovo offered an RTX 2070 model with a 512GB SSD, instead of the 256GB SSD and 1TB HDD it does now. Transferring files to the hard drive to make room for more games on the SSD, which filled up way too fast, was a far too slow process.

Lenovo puts the Y740’s battery life at up to five hours, but as is usually the case, it failed to reach that mark. When looping a video with the display set to 50% brightness, the Y740’s battery lasted 87 minutes total. That’s enough to get through a couple of episodes of The Office and that’s about it. That’s the lowest battery life out of the handful of RTX-equipped laptops I’ve tested thus far, with the Razer Blade 15 and its RTX-2060 sitting at the top with 181 minutes total. 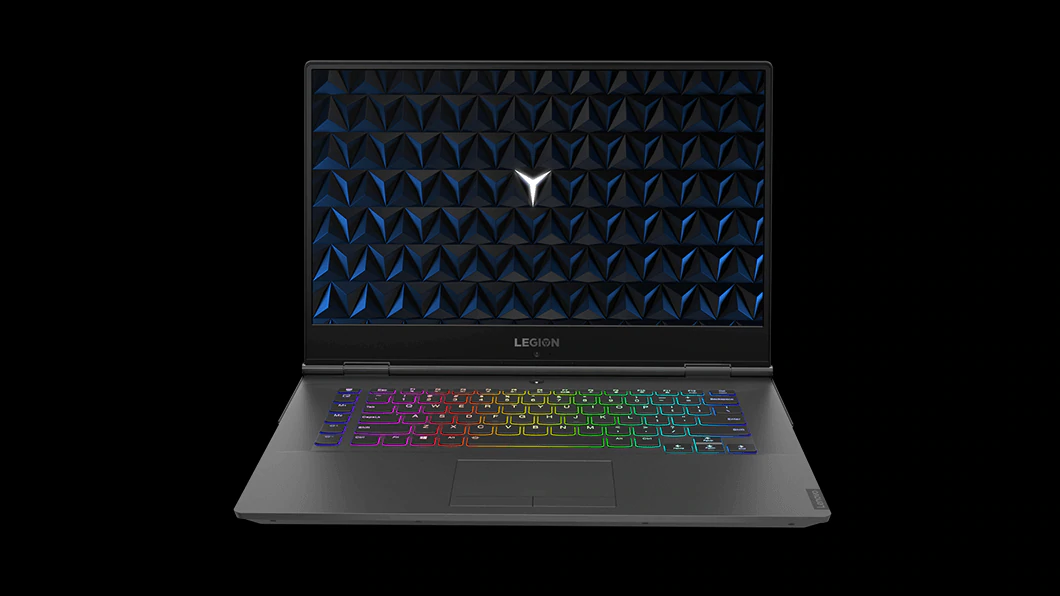 The Y740 has a unique design and impressive performance at an attractive price. Lenovo has built a machine that strikes a great balance between price and performance, with battery life being the only blemish on an otherwise fantastic laptop.