Every so often, I come across a video game that is so difficult as to make me feel like I’ve never picked up a controller in my life. But this isn’t very common in one of my favorite genres, sports — primarily because there aren’t a lot of game developers experimenting outside the mainstream franchises like FIFA, Madden, and NBA 2K.

But when you’re not trying to make a mass-market product, you can do the kinds of things that Montreal-based indie team Crea-ture Studios is doing with Session, the simulation skateboarding game that surprised everyone at E3 2018 — first by showing up at Microsoft’s press briefing, and then by not being the long-awaited Skate 4. (Studio co-founder Marc-André Houde told me that Crea-ture later realized it might’ve been a good idea to put the title card at the top of the trailer, although he noted that the idea his game would be mistaken for a big-budget EA Sports production was “kind of flattering,” considering that there were a mere four people working on it at the time. Now it’s up to six.)

Those kinds of things include a realistic control scheme that makes sense in your head but takes a lot of effort to grasp, let alone get down pat. And moving beyond the controls, Session requires approaching it with a different mindset than you’d have for most sports titles. In a game that’s this challenging, your sense of accomplishment comes from within. 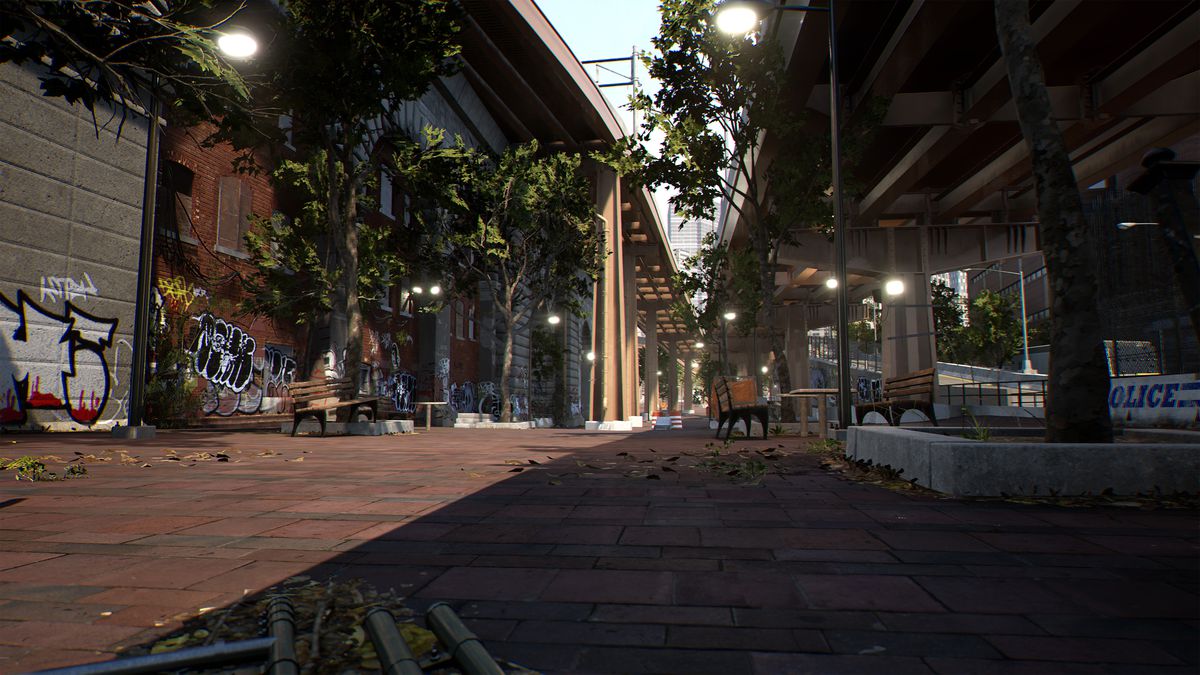 “My desire to play realistically in skateboarding games started with [the] Tony Hawk [franchise],” said Houde during a demo at Polygon’s office in August. “I was doing these tricks, and I was getting kind of upset by always overshooting my stuff and catching my kickflip, like, 10 feet away.”

Houde found himself having the most fun when he unlocked the Sim Mode in the old Tony Hawk games, which is ironic, since the description for its cheat code in Tony Hawk’s Pro Skater 4 said it would “make the game no fun.” What it actually did was increase the gravity (which reduced jump height), slow down the movement speed somewhat, and make it a bit tougher to land long strings of tricks. It still wasn’t anywhere near realistic, but it was more difficult than the standard game.

The original Skate, which debuted in 2008, inspired Houde to try making his own skating game; he said Session wouldn’t exist without it. Houde first created a prototype the next year, but it didn’t go anywhere. While working at Warner Bros. Montreal on games like Batman: Arkham Origins, Houde met Vincent Da Silva, and the two later founded Crea-ture together. They built a new prototype in 2017 with the help of the Canadian Media Fund and brought the project to Kickstarter that fall, where they pulled in more than double their funding goal of CA$80,000. On Kickstarter, Crea-ture pitched Session as allowing players to “live the sport in its entirety,” and that’s why street skating itself is just one element of the game. “We’re not tackling skateboarding as a sport, but more as a culture, and as a lifestyle, and a way of expressing yourself,” Houde explained to me, again citing the Skate series as a predecessor. Session is built around three pillars: skate, film, and share.

There’s a purity to the skating experience that’s refreshing, and not just because of the hard-to-learn controls. Session makes you unlearn the muscle memory of the standard setup in modern 3D games, where the left stick controls movement and the right stick turns the camera. Here, the left stick governs your left foot and the right stick directs your right foot; you turn with the left and right triggers. It’s a simple concept, but coupled with the game’s realistic physics, it forces you to rethink everything.

The simplest skating maneuver is the ollie — jumping — and here’s how it works in Session: You pull down on the right stick to crouch and load the jump with your right foot, and then flick the left stick upward to execute the jump by moving your left foot up on the board. And remember, since the sticks correspond to your feet, everything is flipped if you’re skating in the switch, or goofy, stance (i.e., with your right foot forward). Flip tricks are pulled off by flicking the left stick in different directions.

As for grinds, there’s basically none of the magnetism that you’ll be accustomed to if you’ve ever played a Tony Hawk game. It took me at least five straight minutes of flopping on my face before I managed to grind a rail, and another few minutes before I could jump off the rail without bailing. It’s important to look before you leap, too. Houde told me that Crea-ture based the jumping physics on amateur skaters; the best ones have an ollie height that tops out around 30 inches, so don’t expect to jump over cars in this game. (Your stats will improve over time, depending on how you play — the more time you spend on particular activities like jumps or grinds, the better you’ll get at them.) 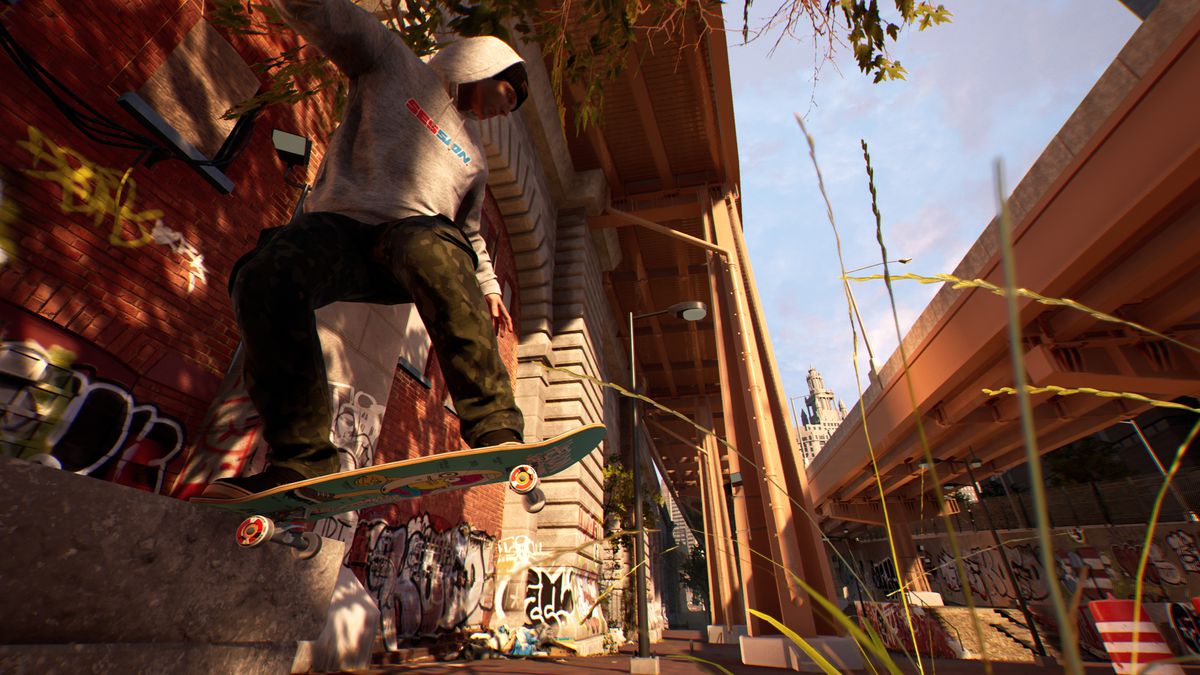 OK, you made it on the rail. Can you get off without bailing?
Crea-ture Studios

This is at the heart of Session’s gameplay loop: practicing the most basic skating maneuvers and tricks until you can pull them off regularly, and slowly stringing them together. That’s pretty much all there is to it; Session has no scoring system, and it doesn’t acknowledge your success or failure. You set your own goals, and you make your own fun by meeting those goals.

“Your achievement is: When you land it, nobody has to tell you ‘congrats,’ because you are feeling so freaking happy,” said Houde. Indeed, the first time I successfully ollied into a nosegrind, I fist-pumped and let out a “woo!” It helps that Session’s only current environment is a chunk of my hometown — downtown Manhattan near the Brooklyn Bridge and City Hall — that truly feels like New York City (except for the fact that there aren’t any people in it except your skater). I can barely stand on a skateboard, so I’m enjoying the feeling of skating around a place I know well.

Of course, the best way to feel even better about yourself after landing an awesome combo is to share a clip of it with the world. Session currently offers a rudimentary replay editor on Steam Early Access, where Crea-ture launched the game on Windows PC last month. (The studio is aiming to bring it to Xbox One via Xbox Game Preview this fall.) Eventually, the team hopes to build in features like posting clips directly to social media.

During the early access period, which Crea-ture considers a pre-alpha stage of development, the company is planning to add what it calls Filmer Mode — allowing a second player to follow you and capture your skating highlights — as well as vert skateboarding and some party games. But Houde stressed that the team doesn’t want Session to languish in early access forever. Crea-ture’s current plan is to release version 1.0 in “early 2020,” and to maintain parity between the PC and Xbox One versions as much as possible. Now comes the hard part of reaching the goals that the team has set for itself.