For achievement hunters, Ready to Body may be one of the most elusive targets. The challenge doesn’t take skill or time to unlock; in fact, it should have been one of the first achievements that Killer Instinct players on Steam earned. Just fight ten matches to snag Ready to Body. But instead, it took dedicated fighting game players years to unlock this simple achievement.

Between full-time work, exercise, and volunteering, Gordikk doesn’t have a whole lot of free-time to play games. Gordikk describes himself as an “avid completionist,” which can lead to some trouble when a game is glitched. When Gordikk realized that nobody could actually earn the Ready to Body achievement, he took it upon himself to see that it would be fixed. He had no idea this would turn into an adventure that spanned over a year, and would involve the Better Business Bureau as well as the publishers of Killer Instinct.

It started online when Gordikk posted on a Steam forum that the achievement had a bug. No one helped him there so he went to the Killer Instinct forum. There, other users had posted on the same problem. A community moderator responded to the post and tagged James Goddard, a design director of Killer Instinct. Thirteen days later, Goddard thanked the community moderator for flagging the issue and said he would “look into it”. Three months passed and Goddard never returned with a fix. It seemed like a dead complaint – until Gordikk got involved.

Gordikk started by reviving the original forum post where Goddard said he would look into the problem. Gordikk pleaded for a fix on the forum, but a moderator from Killer Instinct stated they didn’t couldn’t do anything at this point. That was a dead end.

Gordikk decided to contact Iron Galaxy, a development studio behind Killer Instinct, directly, and they sent him to Microsoft and Xbox support. After Microsoft didn’t work, he contacted Steam support, which then sent him back to Microsoft. He tried Rare, but it told him to try Microsoft if he hadn’t yet. It seemed like no one would take responsibility for fixing the achievement.

Eleven months had passed since his original post on Steam and Gordikk couldn’t let it go, so he launched what he described to Polygon as a “civil disobedience campaign.”

“Eventually I’ve had enough,” said Gordikk. “I’m going to Andy Dufresne this, [from] Shawshank Redemption. I’m going on the forums. I’m gonna be there every day. Posting a new thing saying, ‘Please fix this’. I’m gonna be polite, but I’m not going away”

Nobody cared about his first post. On the second day the moderators told him not to create duplicate threads. Gordikk understood where the moderators where coming from, but that didn’t stop him.

After continuing to post new threads, Gordikk landed himself a three-day suspension and moderators deleted his thread.

“So I started making fake accounts,” Gordikk said. There was a process involved: he had to make a new email, sync that with his Microsoft account, and then connect that to his Killer Instinct account. Despite these hurdles, Gordikk estimates that he made around 28 accounts.

As time went on, it took the moderators less time to ban him. What started as two hours became minutes. However Gordikk developed his own savvy as well.

“I noticed at first, that the office that they were coming out of was on the West Coast. I’m on the East Coast, so there was a three-hour difference. So it was more likely that if I posted early in the morning. Unless someone is on top of it, I might post at 8 a.m. or 9 a.m. It’s 5 a.m. or 6 a.m. for them, so I figured hopefully they’re not on their computers and I’ll get a bit more exposure time. 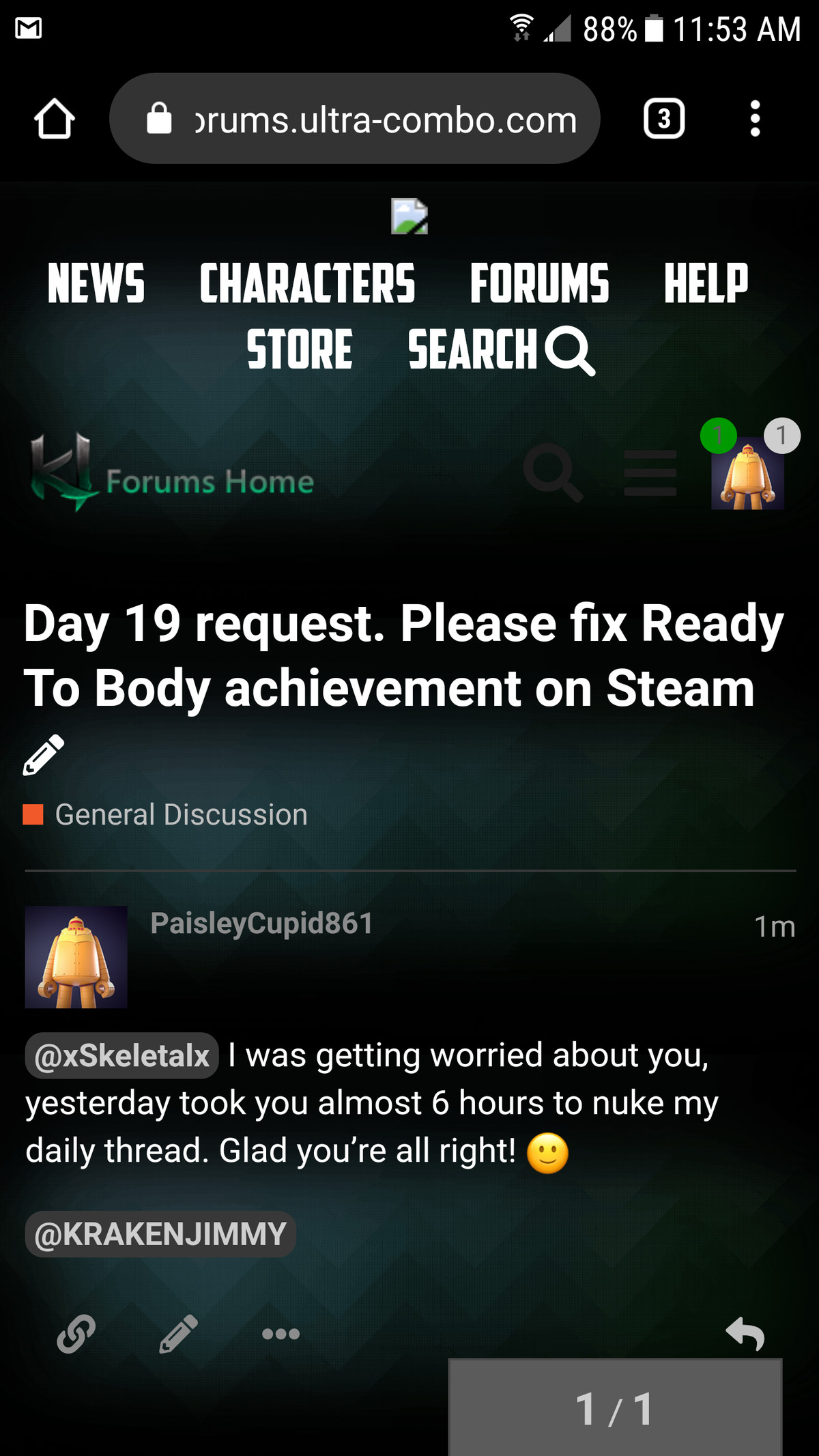 “Sometimes I would play with the time,” Gordikk said. “If I was consistent at night after a while, they would figure out OK he’s gonna do it here. So maybe they got someone on the East Coast to take care of it. Well then I would try to do it late at night, like 11 p.m., and it would just throw them off. I remember once it took them six hours to take me down and my next post, is kind of taunting in a polite way. ‘It took you six hours yesterday. I was worried about you. Glad to know you’re OK.’”

This kept progressing until moderators changed forum rules so that every first post from a new account had to be approved by a moderator. “I’m married, work full-time, volunteer, spend a lot of time working out and upkeep on my home, as defiant as I wanted to be it wasn’t realistic. So on day 30 … I gave it up,” Gordikk said.

It had been a year since his original post on the Killer Instinct forums. The issue wasn’t going to get resolved through his available channels. Gordikk decided to take a break from his project and wait until another Microsoft game, the Halo: The Master Chief Collection, came out on Steam. He reasoned that Microsoft would have to add more Steam customer support to assist in its release on the platform.

Two weeks passed waiting for Halo, but then he thought, “Hey, why not make a complaint to the Better Business Bureau?” A co-worked mentioned it to him before his civil disobedience campaign, but he didn’t try it because he had heard it was ineffective. Since nothing else had worked up to that point, he figured it wouldn’t hurt to try. So he gathered the details and filed a complaint.

Two days later, he received an email from Microsoft saying that it received the complaint and he’d be contacted by a senior engineer “within one business day.” Goddard, the same developer that had originally posted a year ago that he’d look into it, wrote a post on the Killer Instinct forum that said he would address the glitch the following week. (Polygon reached out to Microsoft to corroborate this long story, but did not hear back.)

On June 21, 2019, 1 year and 2 months after the initial Steam post, and 1 year and 8 months after its release on Steam, Ready to Body worked. Gordikk finally went on to unlock the achievement.

Polygon asked Gordikk if getting the achievement was worth all the pain or if he felt bad about what he put the forum moderators through during his campaign. He told Polygon “It certainly was worth the trouble, I take pride in completing all my games without cheating and take satisfaction in righting an injustice,” Gordikk said. “I don’t have any remorse for my actions, it’s part of any customer service job that I deal with myself.”

However, a moderator did flag the developer responsible for the fix, only 13 days after the first post about the bug. The moderators did their job. They weren’t the ones responsible for fixing the bug. Despite that fact, they had to deal with the posts day after day, and faced the brunt of disgruntlement from Gordikk while simultaneously managing an active forum.

When Gordikk unlocked the achievement, he told Polygon that he felt “ecstatic, but also disbelief. It was a similar feeling of finally beating the hardest part of any game that you’ve been stuck on for weeks. It really was the most difficult achievement I have ever earned in a video game.”

These days, Gordikk has moved on to other games.

“I’m currently playing Team Sonic Racing and it has a glitched achievement on Steam. Nothing has been acknowledged or patched yet by Sega, but it’s only been out just over a month. Hopefully I don’t have to do this again with Sega!”