I’m 90 hours into Assassin’s Creed Odyssey, and at some point a whole lot of new quests were added to my log. These quests are called the Lost Tales of Greece and, to be clear, I didn’t put them there.

The quests are free DLC that have been released over the course of Odyssey’s first year. I was vexed when I saw them. I take joy in checking things off my to-do list, and I was trying to mainline the narrative. But, instead, I could only scream as my quest log ballooned with a flood of new content.

And the Lost Tales don’t further the plot of Assassin’s Creed Odyssey. They’re billed as self-contained stories; many of them involve revisiting well-trodden locations. Was this … fluff? In my hundred and sixty-five hour RPG? Who has time for that?

But I’m here to eat my words, gentle friends. I’m finally tapping into these extracurricular quests — did you know there’s a trophy for completing each one? — and they’re baller. They contain some of the best writing in the game, and they’re an effective showcase of many of the things that make Assassin’s Creed Odyssey so magical.

If you haven’t played these quests yet, for the love of everything, please fix that. Until then, let me explain what makes them so good.

I started with “A Brother’s Seduction,” after being tempted by the saucy title. This story kicks off with Kassandra rescuing a man from bandits. Easy! I thought. I’ll take that trophy now!

Not so! After bringing Lykinos back home, I met his brother Timotheos (I probably should have seen this one coming). The standard “rescue an NPC” mission became an engrossing family drama — with a healthy side of romance. Lykinos and Timotheos’ father had recently died, and the brothers grappled with how to mourn him. Plus, why did these bandits keep causing trouble? The gentle poet Lykinos and the hard-edged Timotheos vied for my affection as I teased out the full, riveting story.

Family is what Assassin’s Creed has always done best. Each entry in the series is at least a little bit about family, simply because Assassin traits are inherited. But some games address the theme more directly. Assassin’s Creed 2 and its sequels see Ezio becoming the head of his family while grappling with his legacy. Twin siblings Jacob and Evie take out their sibling rivalry (and their fraught relationship with their dead father) on the entire city of London in Assassin’s Creed Syndicate. (And we also keep getting some good music out of the family theme.) 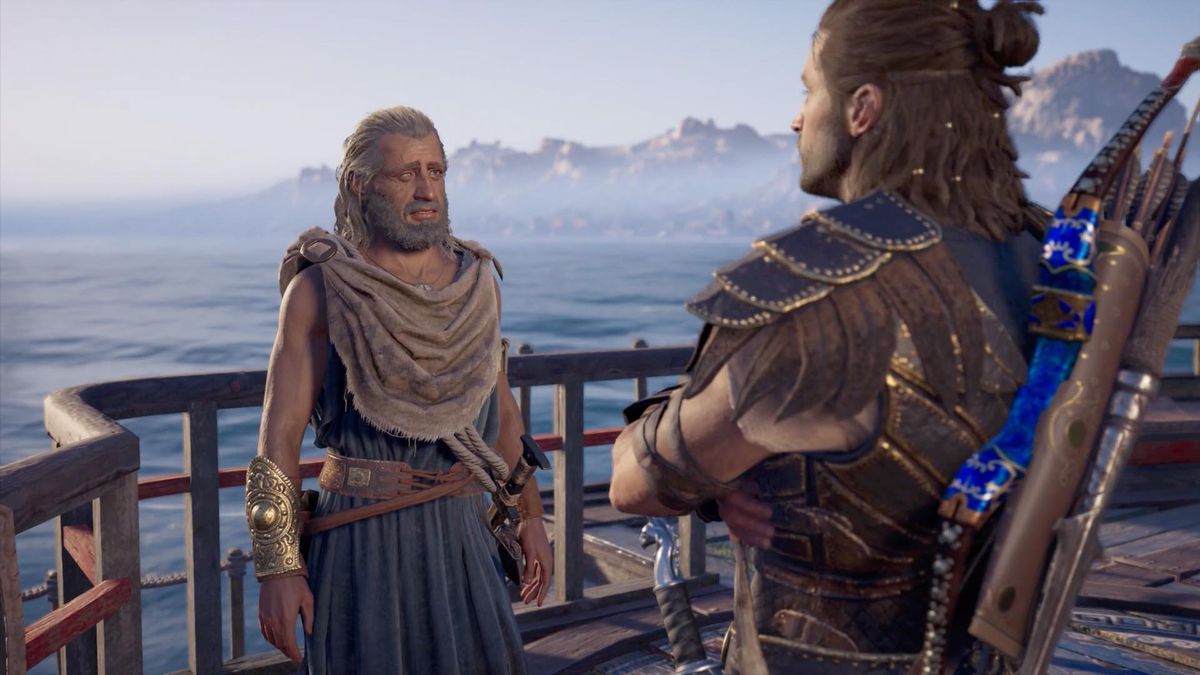 Odyssey is no exception to this tradition: Kassandra or Alexios’ journey is all about fixing their broken family. The Lost Tales also deal with family matters, just on a smaller scale.

One of the absolute stand-out Tales is “A Friend Worth Dying For,” a quest from Kassandra’s devout captain Barnabas. He’s had a prophetic dream about his missing wife, long presumed dead. He sees her in several dangerous situations, and begs Kassandra to go after her.

If Kassandra accepts, she can either do so while indulging Barnabas’s beliefs (“Your wife was definitely drinking wine with a witch!”) or while scorning them. I chose not to burst the guy’s bubble. l’m fond of Barnabas, and I like to be liked. When he asks if the spices I find in a cave were used by his wife to help a cyclops grow a second eye (don’t ask), Kassandra can choose to agree: Of course they are magic spices!

“Most would have called me crazed, but not you! You truly are my best friend,” Barnabas told me. He knows how to make a gal feel good about her decisions.

This storyline fleshes out Barnabas’ relationship with Kassandra, as well as his own backstory. It also toys with one of my favorite elements of Odyssey: the porous border between myth and reality.

Barnabas is religious, and he fully believes in gods and monsters. Odyssey itself usually presents faith as a gray area. This world is certainly more magical than previous games in the series, but explanations are often offered for the miracles that Barnabas sees in the world.

Quests like “A Friend Worth Dying For” play both sides of this argument in a way that’s deeply pleasurable. The gods’ existence is explored, even if it’s not confirmed. In ancient Greece, when so much of the world is a great question mark, why shouldn’t the gods feel a little bit closer to reality? 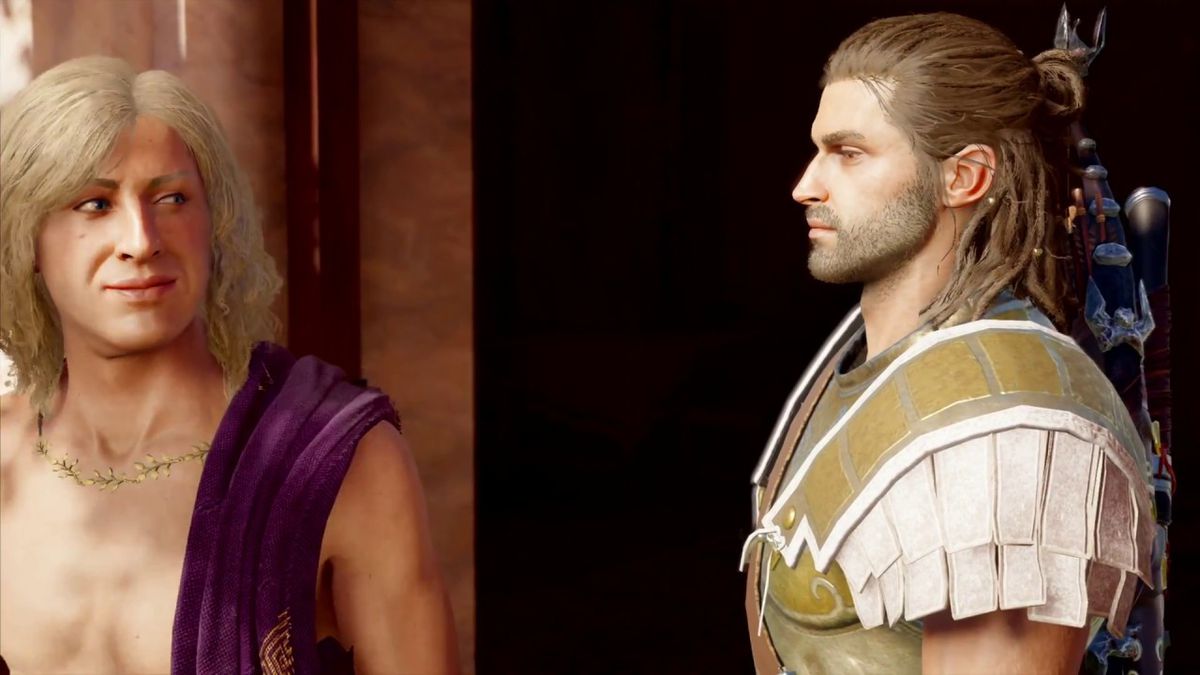 Again, this simple premise gets twisted into an engrossing story of family and betrayal (and as always, bandits!). The most pleasant surprise for me was the friendship that developed between Kassandra and Praxilla — and the acidic back-and-forth between Praxilla and the woman who repairs her lyre, who may also be Praxilla’s lover. We may never know. (She’s totally her lover.)

Like much of Assassin’s Creed Odyssey, “A Poet’s Legacy” is elevated by playing as Kassandra. It’s one of the few games I’ve played in which there are so many charged, thematically heavy conversations between women. Kassandra has devoted her life to fixing the family her father broke, while Praxilla left her husband and children to pursue poetry.

Both perspectives are treated with respect, and the lives of these two characters provide a rich vein of good conversation, about topics that are rare in this sort of blockbuster epic.

From one Eagle-Bearer to another…

I have to give a final shout-out “One Really, Really Bad Day.” This story brings Kassandra to a village in need of a misthios! Only… there’s already been a misthios here. And he really fucked everything up. He also claims to be the Eagle-Bearer, which is Kassandra’s title.

Kassandra vows to clean up the mess, and, true to the quest’s name, everything goes horribly wrong. The story is funny, unexpected, and totally bananas in the best way.

Although the Lost Tales of Greece are free post-game DLC, none of the missions feel like an afterthought. Each one offers a different perspective on Odyssey’s world or characters, and they showcase top-tier writing and design, without taking themselves too seriously.

If you haven’t popped into Odyssey in a while, or you ignored these quests in your log, it’s worth your time to go back and see what they have to offer. The game was already huge, but these smaller chunks of story and character only make the package more attractive and complete. I thought they were surprise homework, but they turned out to be an unexpected treat.

Call of Duty: Modern Warfare now lets you kill people with a crow

Street Fighter 5 will bring back Dan, Rose, and Oro for season 5
We and our partners use cookies on this site to improve our service, perform analytics, personalize advertising, measure advertising performance, and remember website preferences.Ok