As part of Bungie’s new developer stream for Destiny 2’s upcoming Season of Dawn, the studio revealed the next three months of Destiny content. From Dec. 10 to early March, players can participate in two different holidays, unlock two Exotic weapons, and more.

Starting on Dec. 10, season pass holders can tackle the new Sundial mode, taking down the Niruul boss. All players can start their seasonal journey with the Lantern of Osiris artifact, Solar subclass upgrades, the return of the Elimination PvP mode, a returning PvP map, and two mysterious Obelisks on Mars and the Tangled Shore. 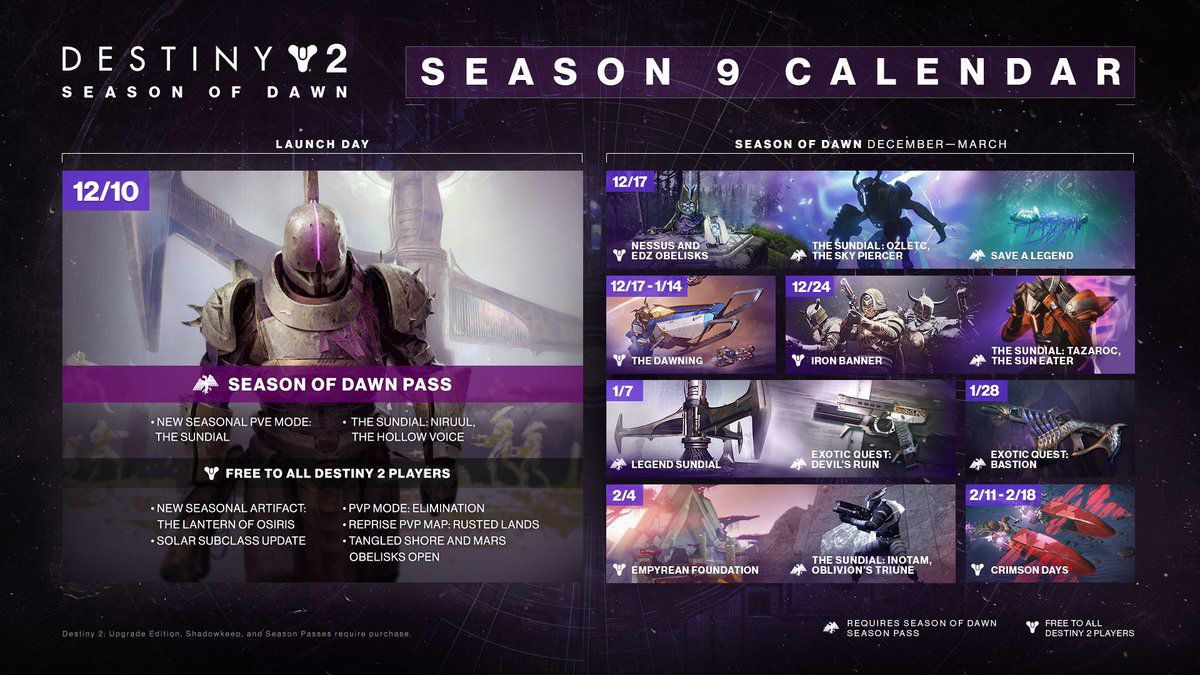 On Dec. 17, two new Obelisks open on Nessus and the EDZ. The Sundial gets a new boss, and players will finally save the legendary Titan, Saint-14. The Dawning holiday — Destiny’s stand in for all winter holidays — also starts on Dec. 17.

On Dec. 24, players can tackle the first Iron Banner of the season, and a new Sundial boss. On Jan. 7, the Legendary difficulty unlocks for the Sundial, and players can chase down the Devil’s Run Exotic sidearm. On Jan. 28, the Bastion Exotic quest starts — Bastion looks to be a Linear Fusion Rifle, but we’re not entirely sure yet.

On Feb. 4, a mysterious event called the Empyrean Foundation starts, and the Sundial gets its final boss. The last event on the calendar is the Crimson Days holiday — Destiny’s version of Valentine’s Day.

There’s always a possibility that Bungie could be hiding quests or Exotics from the calendar, like it did with last year’s surprise Outbreak Perfected mission. Players will learn more about the secrets hidden inside the Season of Dawn on Dec. 10, when the season is live and dataminers can delve into the game’s code.