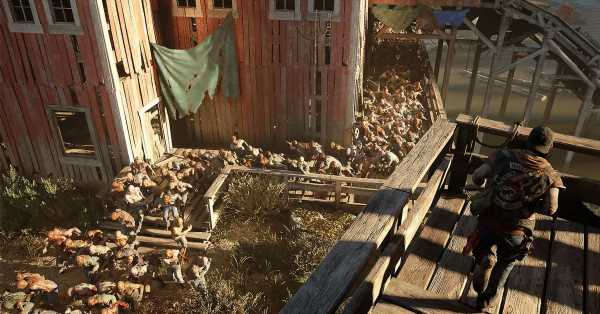 If a sizable PC gaming audience turning out for Tuesday’s Days Gone launch could save a sequel, Bend Studio’s developers aren’t saying. But they have noticed the outpouring of fan support since a report last month said Sony brass already gave a thumbs down to a Days Gone 2 pitch, and the low-key reply there is: thanks, brother.

“It’s exciting to see the support that the game has gotten over the last few years,” lead designer Eric Jensen told Polygon. “It’s been really cool to see the community show their support for the studio and the title. You know, seeing all of [the support], I’m glad we put the effort into our photo mode, because seeing the community posting videos and screenshots and stuff like that, it’s been super exciting.”

An April 9 report from Bloomberg, revealing larger anxieties throughout Sony’s first-party development, mentioned that a sequel pitch from Days Gone director James Ross (who has since left the studio) was turned down. In a livestream with God of War creator David Jaffe a few days later, Ross implied that the game’s community strength was always a constant, but the mixed critical reception and blasé press coverage for the 2019 game gave a red light to any sequel.

“Days Gone has sold more copies than every game the studio has ever made, combined,” Ross told Jaffe. “So it’s successful in that way, and in the community and player response. But the critics, yeah, that was Normandy Beach.”

Not the best pre-release publicity a game could hope for, but the fact remains that Sony Bend’s biggest game ever now opens to an even wider audience on PC. It’s available on several digital storefronts, including Steam and the Epic Games Store.

Development of a PC port began around the time Sony Bend got to work on a patch upgrading Days Gone for the PlayStation 5, giving it 4K resolution and 60 frames per second performance. “The first time that we got to play the game in 4K, 60 [fps] was a pretty awesome experience,” Jensen said. “And so, when we were presented with PC, we’re like, ‘That sounds awesome. We can go higher than 60!’”

“And wider than 4K,” chimed in Zachary Lewis, the game’s senior programmer for the user interface.

Jensen said he and his colleagues took very seriously the obligation of developing for PC, that Days Gone had to have features to appeal to that community, and not just be a strict port mimicking the console’s experience, deep as that was. Ultrawide monitor support, in a 21:9 aspect ratio, is more than just indulging a PC-specific toy on someone’s desk. It makes playing a game, where the threat is constant and all around the player, an entirely different experience.

“When you’re riding the motorcycle down the highway, you can see more off to the sides, and you can see potential threats coming at you,” Jensen said. “Being able to change the field of view gives you a completely different perspective around the character; being a third-person game, when the camera’s up close, you lose some of your peripheral. To pull the camera out and have a wider field of view, in a world that is constantly trying to attack you from every direction, it gives you a little bit of an advantage in that situation.”

Lewis noted that the weapon wheel becomes a lot more versatile, turning hero Deacon St. John into a quick-draw machine, cutting through the volatile mass of Freakers. “I got to prototype out a few different ways of interacting with the Survival Wheel, as well as traditional PC stuff like pressing one through four, to quick-switch weapons, using the scroll wheel. … I felt a lot cooler playing the game, because on the fly, I could really quick craft a Molotov, toss it, turn, quick-swap to the shotgun, blast a Freaker. It just made me feel even cooler than I did playing it on the console.”

It’s tough to assess how strong any launch is for a game on PC, if it’s spread over multiple storefronts. But if Steam Charts is an indicator, Days Gone is faring well with that audience. It is so far averaging 15,094 users, peaking at 18,234 concurrent players, enough for a top 50 debut on opening day. By way of comparison, Death Stranding, previously a PS4 exclusive, averaged 15,188 Steam players in its first month of launch, 32,072 in its first week. Horizon Zero Dawn, likewise, had a 16,042 average in its first month, but also a 49,582-user peak in the first week.

Even then, if Days Gone was profitable and its fan support was always strong, the die may have been cast on its sequel regardless of what numbers it delivers for PC.

“Right now, we’re focused on getting this PC version out and giving more people the opportunity to play the game,” Jensen said. “But, you know, obviously, no new announcements or anything like that right now.”