“I think that’s the thing that makes Days Gone unique,” says John Garvin, Days Gone’s Creative Director. “It’s the fact that [a horde]’s not just sitting at the old sawmill; they will go into those buildings and hibernate during the day, but then they’ll come out at night and go down to the watering hole and they’ll migrate around. All 40 hordes in the open world do that.” Some of the hordes have formed in areas that have more closed-off ecosystems, like the mass grave in the PAX gameplay demo, meaning they don’t need to travel as far for food or water before returning to shelter during the day, but others may wander all across a region before finding what they’re looking for.

“Something we wanted to do with the infestations is actually affect your gameplay loop of traveling through the world,” says Bend’s  Lead Open World Designer Eric Jensen. This manifests in Deacon having to plan out his fast-travel routes once he unlocks them. If an area is too overrun with infected, be it a horde or an infestation zone, he won’t be able to fast-travel through that zone and must instead find another way, either at the cost of expediency or extra fuel for his motorcycle. “It’s kind of a staple in open world games,” Jensen remarks, “but, you know, we wanted to put the Days Gone spin on it.”

Most hordes are made up of what are known in-game as Swarmers: your average, run-of-the-mill freaker. On their own, Deacon can interact with them in a number of ways, from stealth kills and melee combat to luring them around with thrown stones or noisemakers. Each of these actions requires a Swarmer to have its own complex AI and animations, in addition to the assets and effects required to render them in the environment. As you might imagine, putting up to 500 of these creatures in one place is impossibly taxing, even before you make them attack en masse.

“It’s about all the little things that get expensive on one character,” explains Ross. “Then, just multiply that times 500,” he laughs. “The first trick of optimizing the horde was creating a more efficient swarmer to be part of the horde.”

It’s about perception and smoke and mirrors.”

To do this, the team eliminated almost all of the individual functionality of all of the Swarmers in a horde. “It’s just a really light version of the most essential things for these things to be coming at you,” says Ross. “Swarmers, [but] without all the bells and whistles.” These “light” versions all make up the horde as a whole, but they’re not all working the same way at the same time. Each horde you encounter is made up of smaller “clusters,” sub-groups of 20 to 50 or 60 (or maybe even 100 for the larger hordes) freakers, divided up based on their location in whichever area the horde happens to be occupying when you come across it, to further optimize the group. 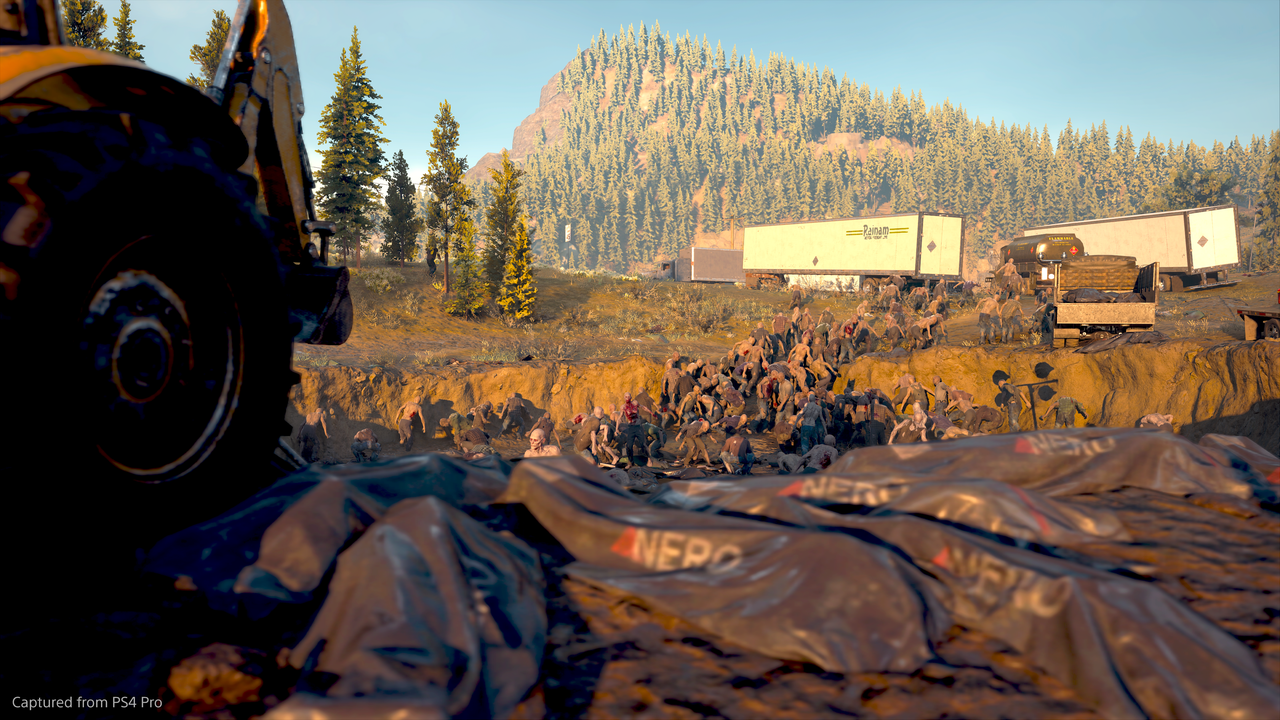 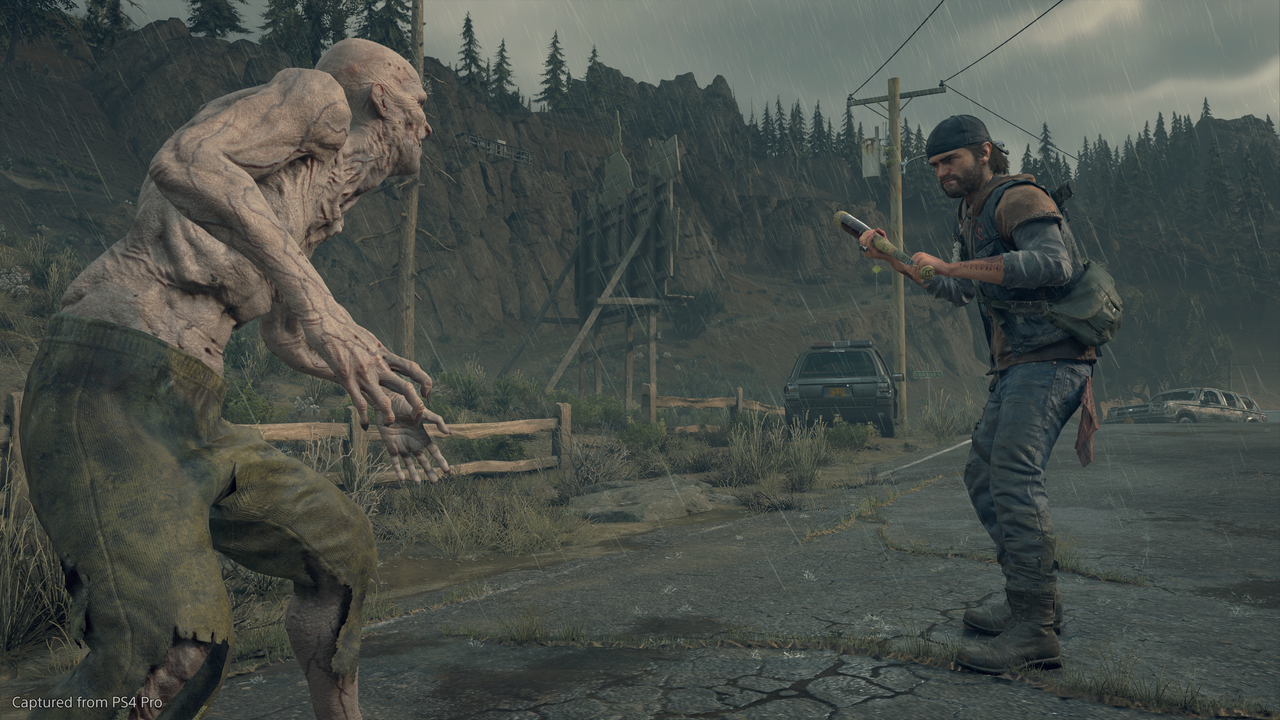 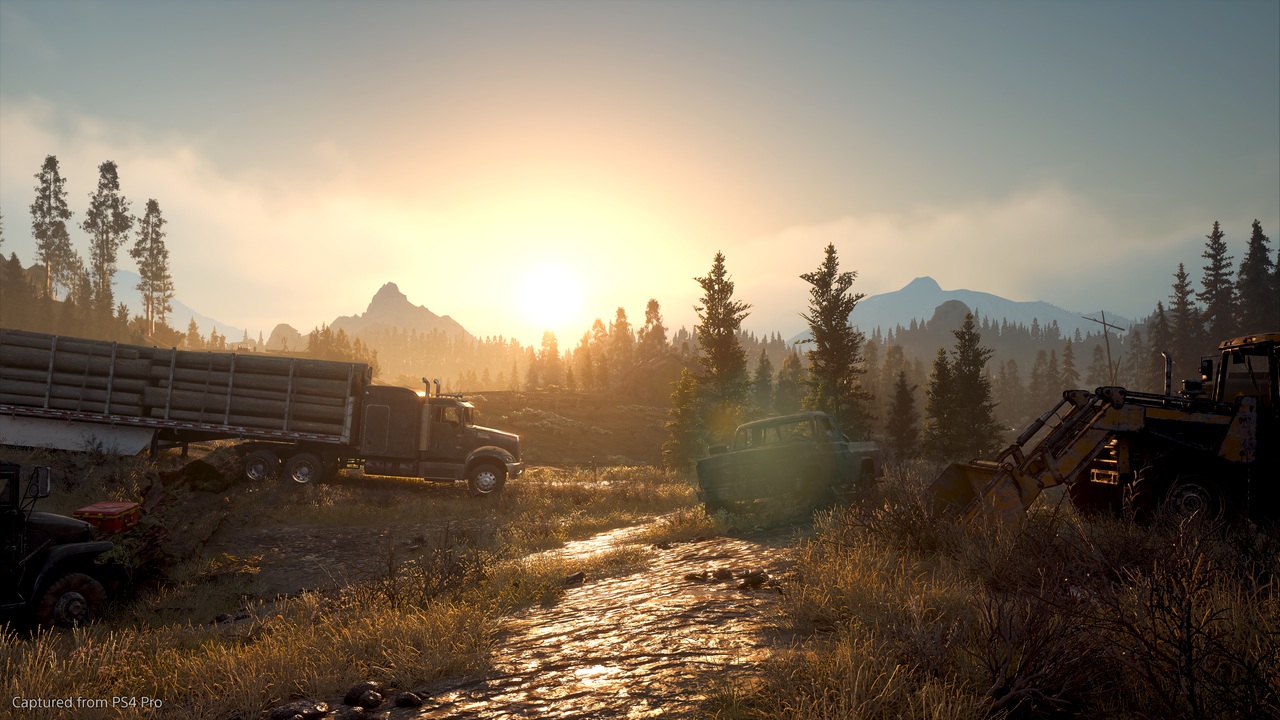 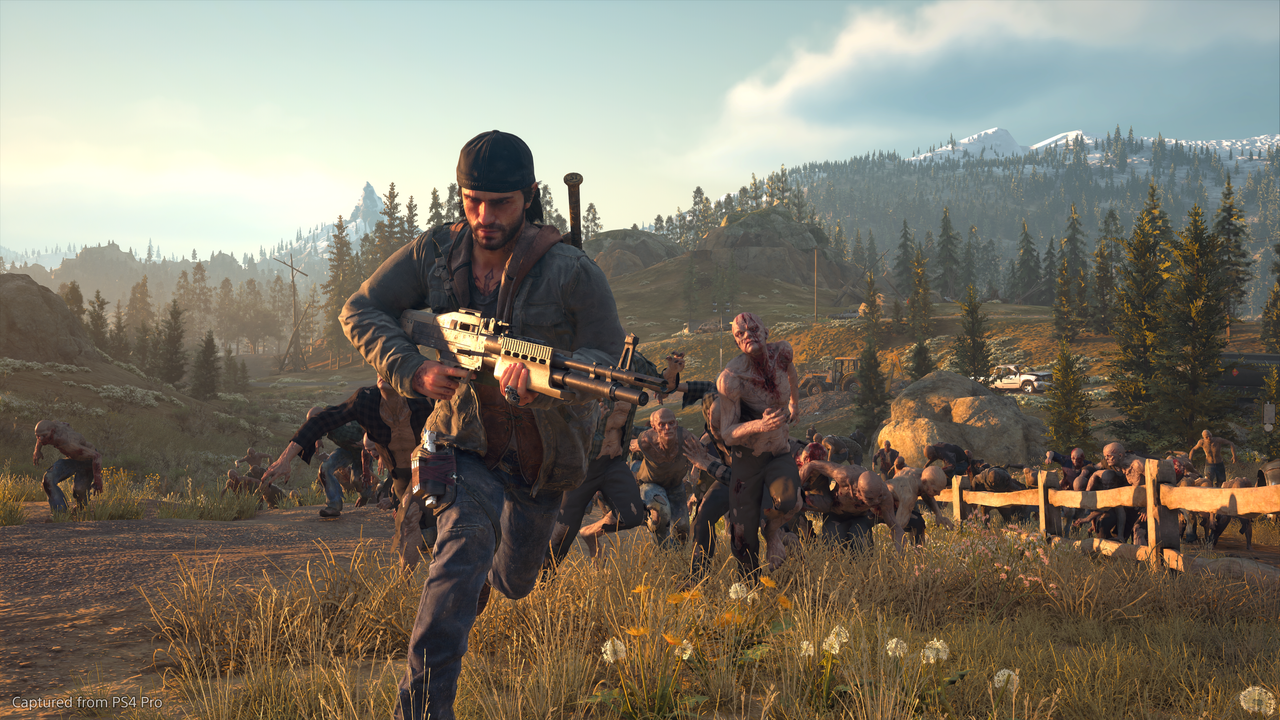 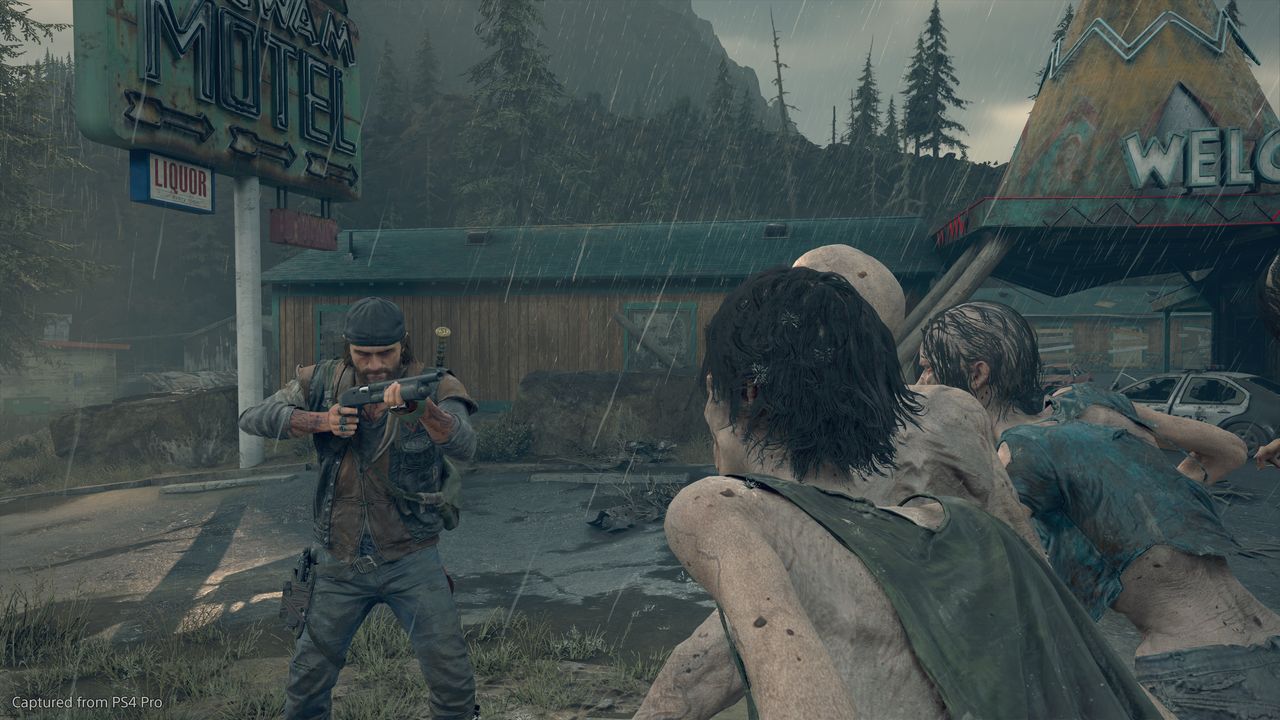 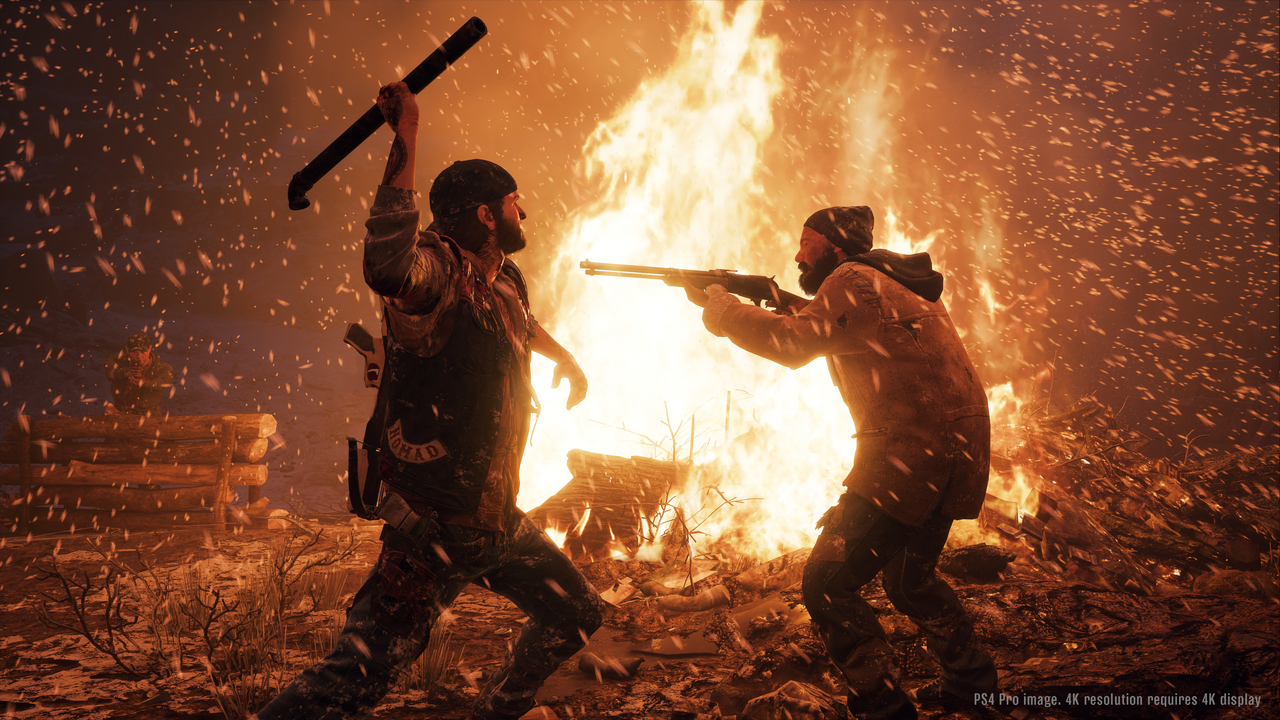 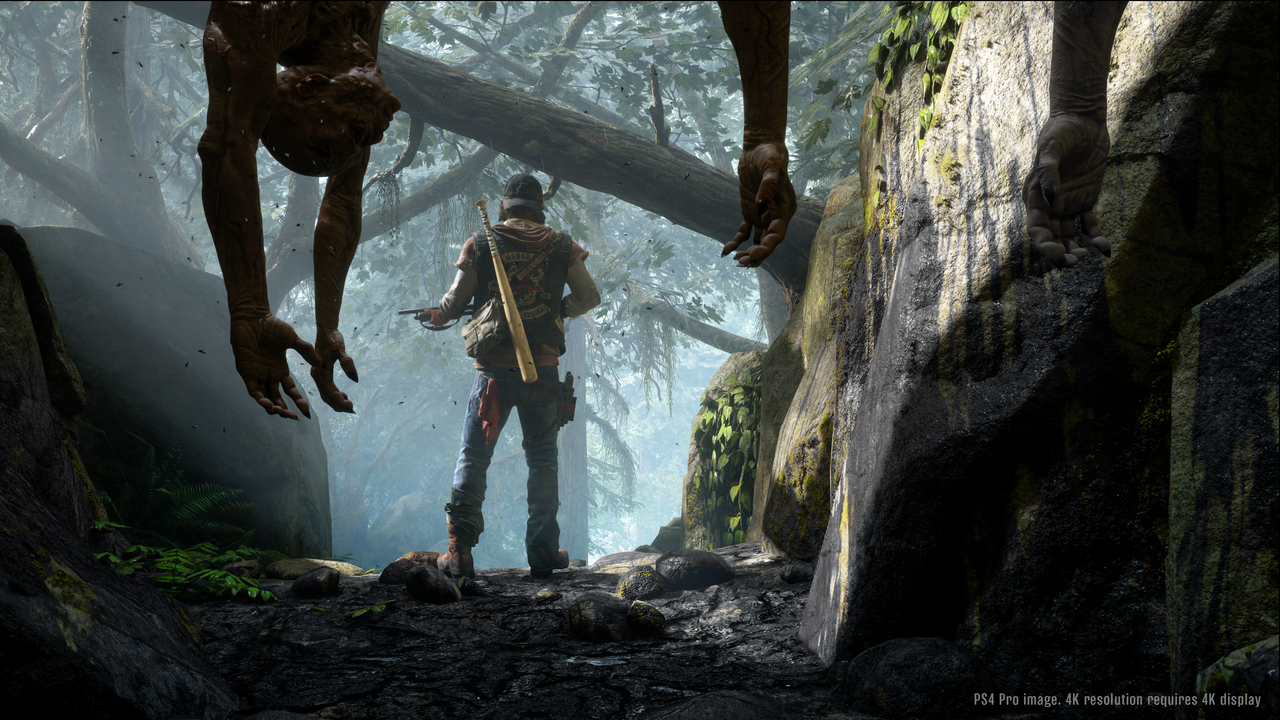 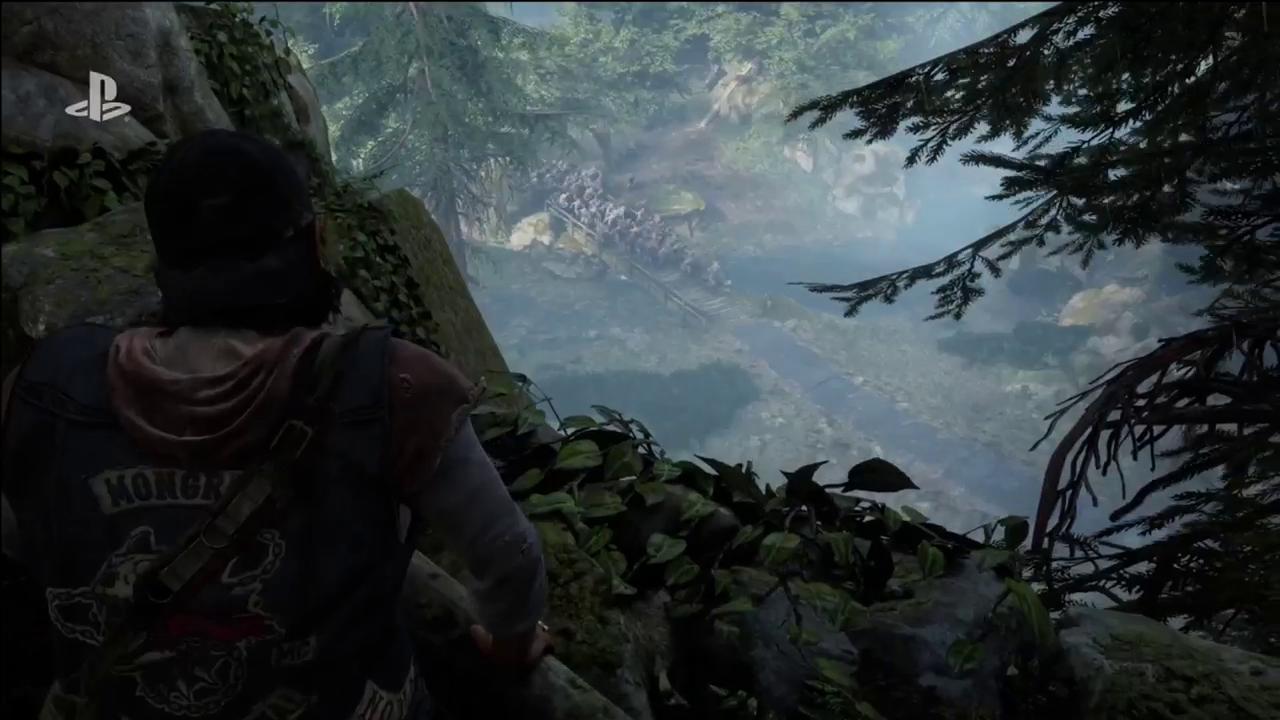 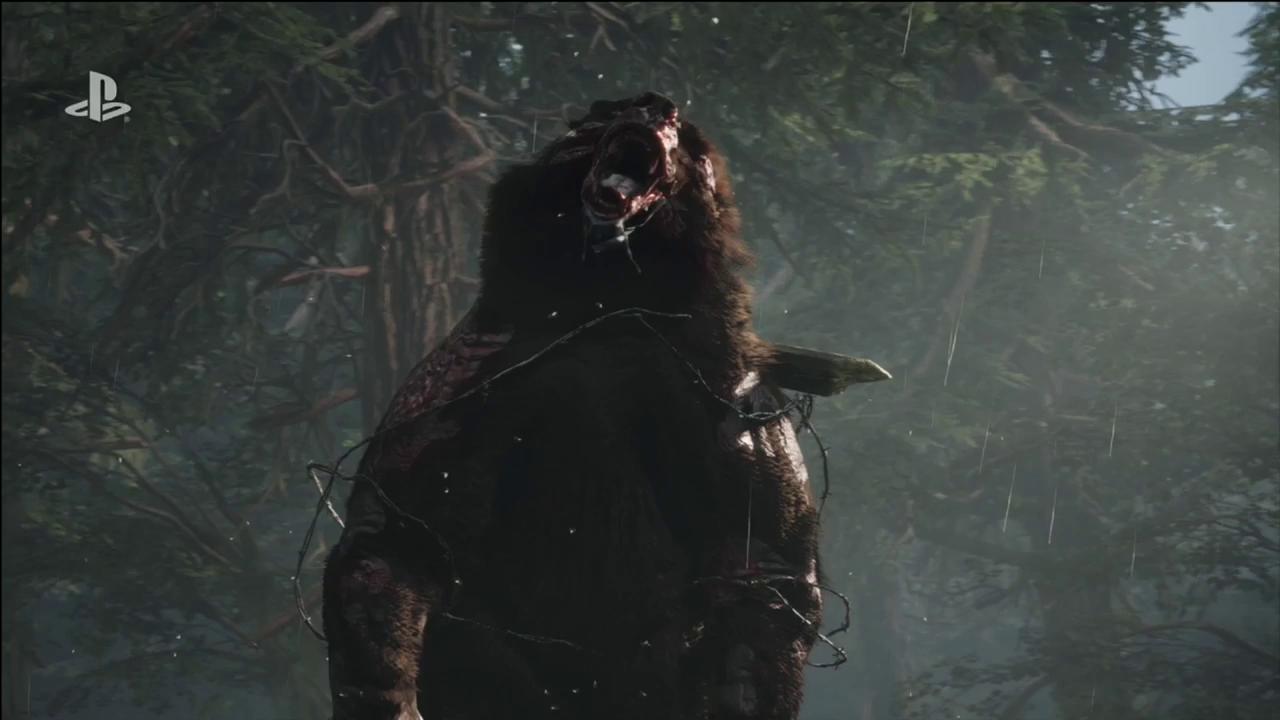 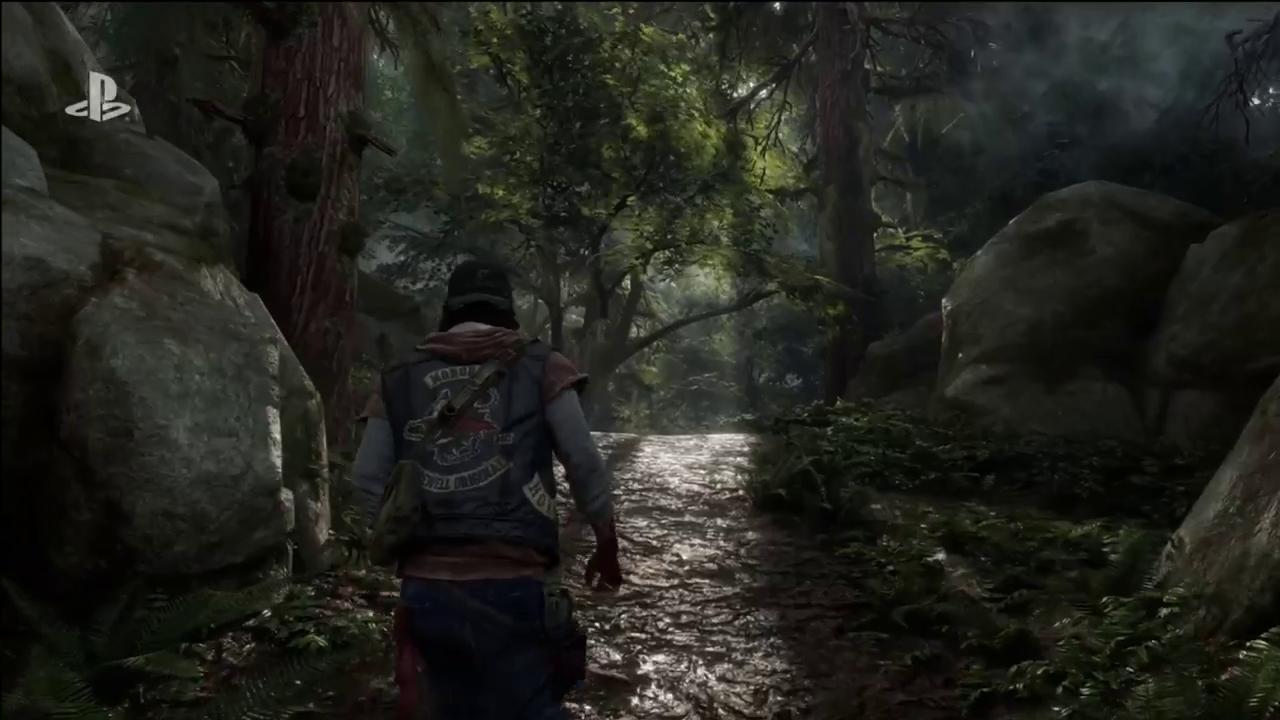 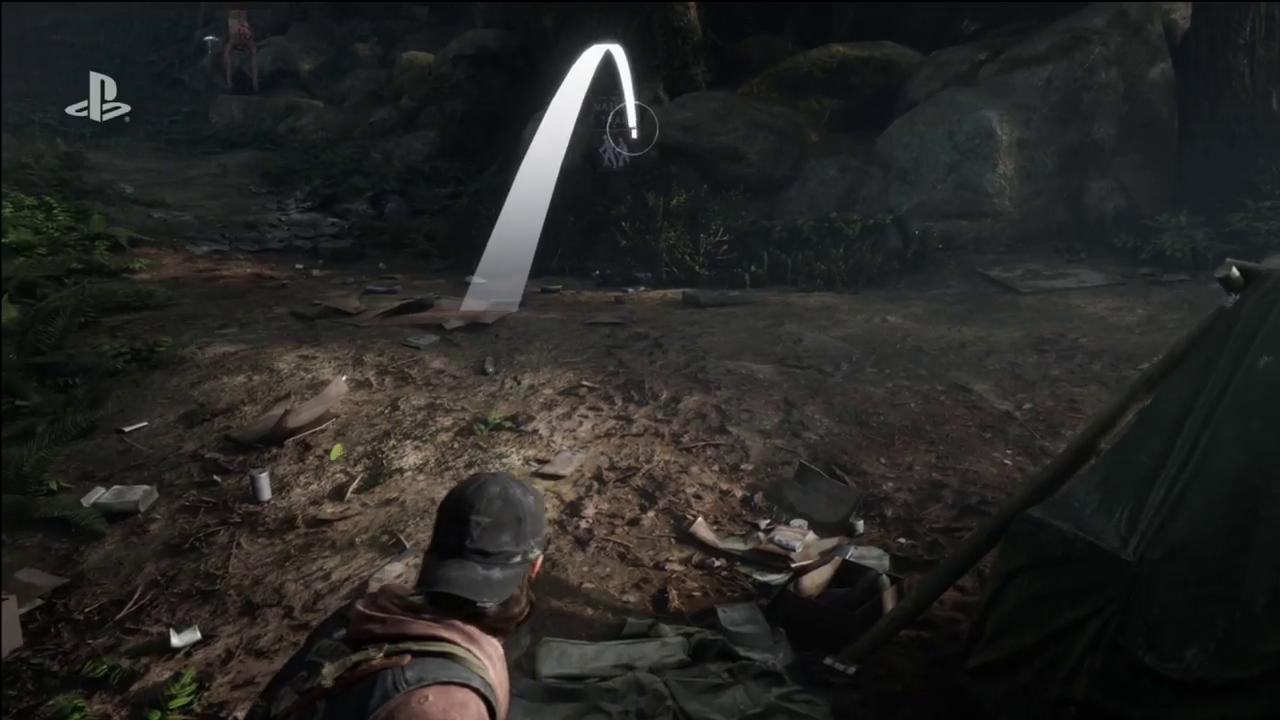 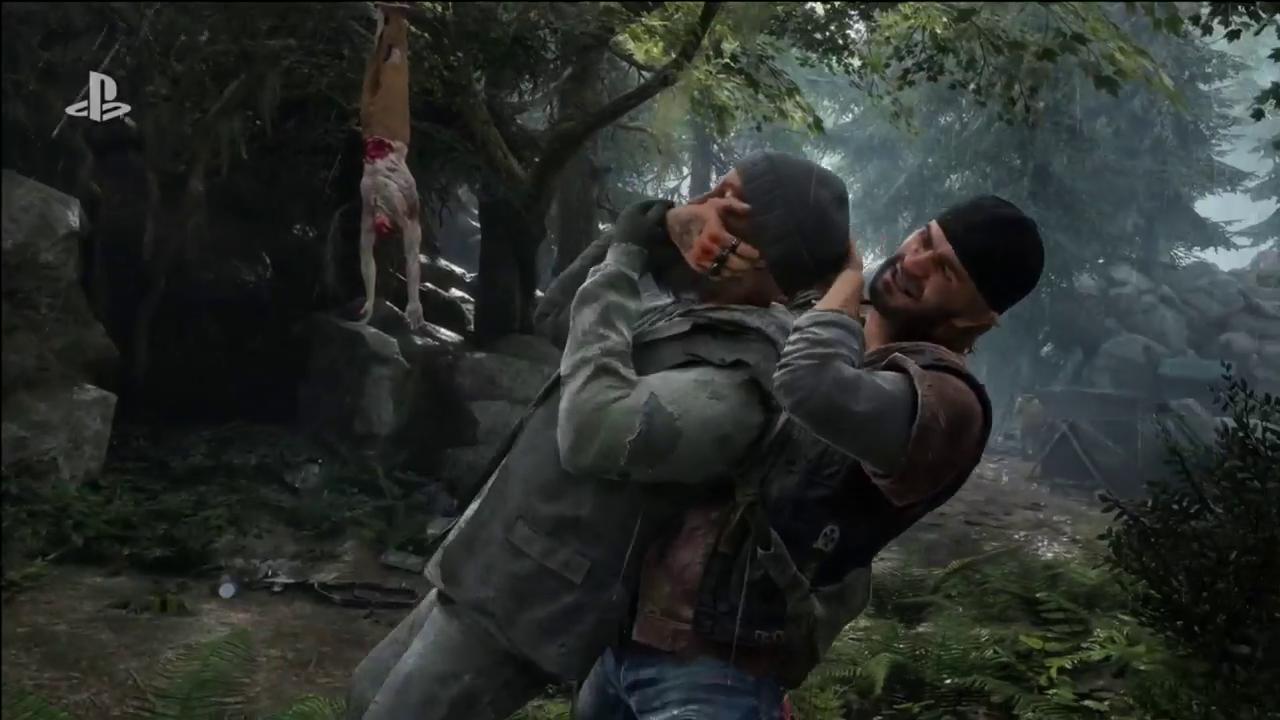 Narratively, Freakers are able to pick up on pheromones that draw them together, sending signals between individuals across the swarm. This accounts for how the large mobs can function with group AI, but the real trick to maintaining the illusion that these clusters of ones and zeroes are living, cohesive entities is how we’re able to observe and interact with them before the madness of a huge fight occurs. To do this, the team devised a way for freakers to shift back and forth, from a simplified horde member to the more complex Swarmer entity, based on their proximity to the player.

“They’re gonna want kind of a more natural, realistic response to the player’s presence,” Ross explains. “One of these smaller guys, who’s maybe broken off [from the main group], might be interacting with a high degree of fidelity with this one thing [whatever it’s interacting with]. But over here in the horde, a guy in the middle of the group is not interacting with the environment as precisely as this guy because it’s more optimal, and the player’s not around to see it… It’s all about perception and smoke and mirrors.”

Of course, just being able to fit all of the creatures on-screen at once is only half the battle. It wouldn’t be a particularly impressive horde if all of its members were carbon copies of one another, all cycling through the same animations in near-unison. But just like it would use too many resources to give every member of the horde the full capabilities of a swarmer, modeling, rendering and animating 500 bespoke NPCs would be an equally demanding task. So how does one make a horde full of creatures that seem unique but doesn’t put the system under too much strain?

According to Jeff, it’s a series of minor tweaks to a small batch of baseline character models. “There are only eight unique models in the entire 500 creature horde,” he confides, continuing, “We have eight meshes, and then we just play with their scale. So, they go from 0.9 to 1.1 [on our scaler]. It seems like a little, but that’s a huge difference.”

By varying those heights, even just by .3 degrees, they create a range of heights among the horde from 5’6″ to 6’4″. Those 10 inches create a lot of vertical difference when the group is motionless, and even more when they move. By changing a creature’s height, they alter its gait, changing its movement speed. So a creature that gets assigned a value of 0.92 will move slower than one set to 1.04. Even if we were to just maintain three distinct heights – small, medium and large – when combined with the eight freaker meshes and 12 separate animation cycles, you get 864 possible combinations for a horde at any given moment. “They all look like they’re related,” Ross explains, “but they don’t look like they’re clones.”

Once the horde was built – and stabilized – the question was no longer “how do we do this,” but rather “how do we make it fun?” Simply dumping 500 monsters on top of players was likely to result in pretty quick and grisly deaths, and while there’s something to be said for about the merits of difficult games, they found it ended up being more frustrating than fun.

“When you have 500 horde [members] descend on you all at once, it’s actually not playable,” says Jeff. “we wanted them to start at their locations and then naturally kind of become aware of the player and work their way towards him, filtering themselves through the terrain.” This was done with an “awareness ring” around the player that attracted new clusters of the horde when they were within range. However, this would sometimes result in stragglers falling behind and getting lost, and players having to circle back and track them down in order to “complete” the horde encounter.

The problem was it actually wasn’t that hard.”

“it really robbed tension from these encounters,” he recounted, “‘Cause you would have just gone through this really cool, visceral fight and then you’d have to go on a mop-up [hunt] that can take 10 minutes as you sweep through all this geometry trying to find him.” To combat this new issue, the team decided to have the detection ring expand, starting small as the player made their way around the outskirts of a horde or their lair, and expanding as the swarm of creatures became more and more frenzied. Eventually, by the end of the fight, the ring has gotten so large that it encompasses as much ground as the horde can cover, preventing any stragglers from wandering too far afield.

Then, of course, there was the issue of difficulty – how effective your weapons and skills are against the horde. When the team first began playtesting outside of the dev team, they found there were a few key issues that had yet to be addressed. “Not a lot of people were playing the horde except for us,” recalled the Game Director. “We told ourselves ‘it’s hard, of course’, but the problem was it actually wasn’t that hard.”

The problem stemmed from the way the horde followed players. Much like a monsterous, hive-minded snake, the freakers would simply try to get at Deacon in the most direct possible way – a straight line. So all players really had to do was pack enough ammo, aim at one spot and hold the trigger down. According to Ross, “We were like ‘uh oh, this is the big emotional concept piece that we wanna build a whole game around, that sucks.'”

The solution was to find a way to spread the front line of the horde out whenever and as much as possible. Not to take up, say, the full width of the players’ screen (though that can definitely happen), but so that there’s enough width to their front line that Deacon can’t just line them all up. “It’s really exciting,” Ross says, “And it properly increases the challenge level of a horde without making them impossible. It just makes it so the player can’t be comfortable with one strategy for too long.”

Putting it All Together

Ultimately, it’s all about these systems – and many, many more – working on top of one another to create the seemless, deadly world that Bend is striving for. “That’s where the cheesy term that I coined, I think, four or five years ago, the ‘freak-o-system*‘, comes in,” Eric Jensen says with a laugh. “You don’t have, like, the animal habitat here and the Freakers over here, and the humans here. Everything can kind of cross over and intermingle.”

“The horde was wildly unpredictable,” he continues. “And unleashing that on the open world with all of the other systems that we have in play – it was just exciting to see it all work together. There were definitely challenges in balancing everything and making sure it didn’t become too overwhelming for the player – but in some cases we want it to be overwhelming because we’re building a dangerous world.”

That notion of emergence, of chaos, seems to be largely where Days Gone aims to shine between missions. Yes, there are plenty of structured activities to take on while not following the critical path, but seeing the way that the world itself was designed – with hundreds upon hundreds of spawn points for across the map, each one keeping track of weather and time of day and player conditions and a slew of other factors – makes me eager to jump into it and experiment with how all of these systems work together. We’ve see so many games that have interesting core ideas that are poorly executed, or made too quickly, or with minimal effort – but it seems that Sony Bend has spent every minute of the last six years working on not only making sure their impressive tech not only works without melting your console, but also that all of those emergent systems harmonize to maintain a dynamic world that’s thrilling to explore. And I am very excited to see the fruits of those labors.

JR is IGN’s Senior Features Editor, and really hopes you liked that Futurama goof. If you did, tell him about it on Twitter.