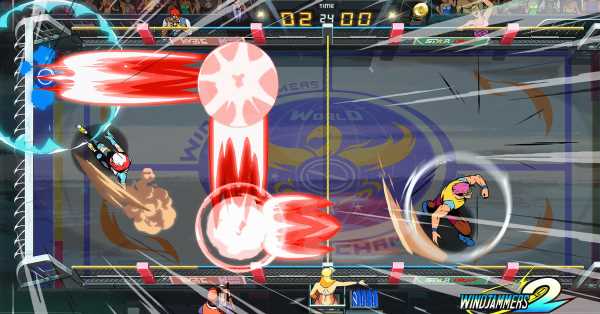 This was always the plan, Dotemu’s Cyrille Imbert said. The French studio, known for its restorations and remasterings of several 1990s hits, spent the past decade earning a reputation for carefully and respectfully handling other companies’ properties. Now, Dotemu’s developers are getting the dream assignments they wanted all along: make all-new sequels for things they loved as kids themselves.

The process has culminated, again, in Windjammers 2, Dotemu’s wholly original sequel to the 1990 Pong-meets-beach-volleyball classic, which launched last week for Google Stadia, Nintendo Switch, PlayStation 4, Windows PC, and Xbox One. (It’s also available on Xbox Game Pass.) Imbert’s studio remastered the original in 2017 for PlayStation 4 and Nintendo Switch after hunting down the rights owner — Paon DP, which bought Windjammers and other Data East franchises out of that company’s liquidation.

“I went to Japan with a pitch, but with the idea of doing both,” Imbert said. “First, a remaster, to relaunch the hype around the game, make it known again. And then, once we reached that goal […] we could launch a sequel, because it just makes sense; there never has been a sequel from the original [Windjammers], and there are so many things that can be improved, and worked on, that weren’t present.”

The same two-stage, long game approach to getting their hands on others’ IP has paid off in three other highly visible projects Dotemu has developed and/or published. The approval for 2020’s highly successful Street of Rage 4 grew out of a 2017 remake of Wonder Boy 3: The Dragon’s Trap, a 1989 game for the Sega Master System. Metal Slug Tactics, coming sometime this year, is an all-original follow-up to four re-releases of SNK’s Metal Slug series on modern platforms between 2012 and 2013.

Lob shots are a new tactic in Windjammers 2, but they can also set up your opponent for a big spike.
Image: Dotemu

Teenage Mutant Ninja Turtles: Shredder’s Revenge, developed by Tribute Games, is also coming this year to Nintendo Switch and Windows PC. Nickelodeon came knocking after Wonder Boy: The Dragon’s Trap panned out successfully for both Sega and Dotemu. Shredder’s Revenge is an all-new side-scrolling brawler, timelessly picking up where Konami’s beat-’em-ups left off almost 20 years ago.

Windjammers 2, though, seems to be a genuine labor of love. Nothing would have prevented Dotemu from deriving its own brand of disc volleyball under another name. It probably would have been easier than tracking down not only the rights holders, but also consulting with the original developers, and even roping in the first game’s composers to update the chiptune soundtrack with real instruments.

Imbert rejected a Windjammers knock-off for a simple reason: “It wouldn’t be Windjammers,” he said. “We were so attached to the original game. There was this … this … this need of working on that license, in particular, because everything was so cool about it.”

It makes sense. Windjammers’ gameplay concept is solid but simple, leaving it to a Jock Jams 1990s aesthetic — hand-drawn, comic book visuals with pastel colors and halftone screening — to make the game memorable. Again, Dotemu could have copied these themes, but there’s no way the work would have had as much creative conviction as a fully licensed sequel, Imbert reasoned.

“Doing something that will look and feel exactly the same, but will not be Windjammers, would feel [like] kind of a treason, you know, for the people who worked on the game back in the day,” Imbert said.

Windjammers 2 continues its predecessor’s subtle blending of fighting game tactics applied to a sport, with new shot types and stage effects to update and differentiate the gameplay. Players now have access to lob shots, curve shots, and other power moves to deceive their opponents and run them across the court. They can also leap into the air for a kind of spike-shot, forcing their opposition into split-second reactions and mistakes that follow.

“When you look at the true players of the original Windjammers now, they have mastered the game so well that it’s almost paper, rock, scissors,” Imbert said. “They know exactly what they’re going to do, and it’s more about endurance. But if you add more and more depth, give them more strategies and strategic choices, it’s like reshuffling the cards for everyone. You know, the pro players, but also the completely new incoming players, who want to practice more and explore those new rules to create completely new tactics and strategies.”

Dotemu even went searching for — and found — Seiichi Hamada, a still-performing bassist who worked on the original game’s soundtrack almost 30 years ago. They collaborated with Hamada and Harumi Fujita on the original soundtrack for Windjammers 2, whose synthesizer and slapping bass do as much to communicate the game’s Neo Geo bonafides as the visuals.

“We don’t need to ask ourselves too many questions,” Imbert said. “The core aspect of every game that we’ve been bringing back is the same, because that’s what we want to see. We don’t want to see something that completely changes it, either.”