My attention is focused entirely on one thing when I play Blair Witch: Bullet.

Bullet is my helpful in-game dog, and the German shepherd is my first and last line of defense out in the middle of the Black Hill Forest. He finds clues, warns me when I’m on the wrong path, and growls at creatures in the woods so I can mount a defense. I also spend what is likely an excessive amount of time stroking his fur and cooing at him. He is a very good dog.

Bullet is the emotional core of Blair Witch, and most of the game’s mechanics rely on his skills. Technically, the protagonist is Ellis, a former cop with a troubled past … but Ellis is just along for the ride. I’d turn the game off and give up on the story, were it just Ellis and me in the woods. I’m here for Bullet now, and I’m rooting for him to make it out alive.

If Ellis were to survive that would be nice too, I guess.

Blair Witch takes place in 1994, which means that Ellis is equipped with basic tools for survival. I have a Nokia brick for a phone, a flashlight, a backpack, a walkie-talkie, and a camcorder.

The game begins when Ellis joins a search party to help find a lost boy. I spend most of my time in the woods walking around, following Bullet and picking up clues as I go. The core gameplay is reminiscent of Firewatch, just in a much spookier locale. There is a lot of walking, and a lot of listening and looking around.

Things quickly spin out of control, of course. Ellis falls off the path, and becomes disoriented and anxious. We get to see the darkest parts of Ellis’s past struggles through his point of view, and it’s a vivid and shocking depiction of someone with mental health issues lashing out at loved ones and struggling with thoughts of suicide. Ellis isn’t a good person, and he is not presented as one. That’s something we have to grapple with, and it’s part of what drives him into the forest on his own redemption arc.

Supernatural baddies haunt the woods, and the characters have recently discovered the tapes of The Blair Witch Project, the original found-footage movie that launched the franchise. They share stories of local legends and evil witches over their walkie-talkie as they search for the missing boy. It’s the sort of thing that might amp up the fear, if the dialogue wasn’t a little silly and the characters weren’t enthusiastically chewing so much scenery in their acting choices.

But obviously, the creatures are real, and they seem to be hunting Ellis and Bullet. 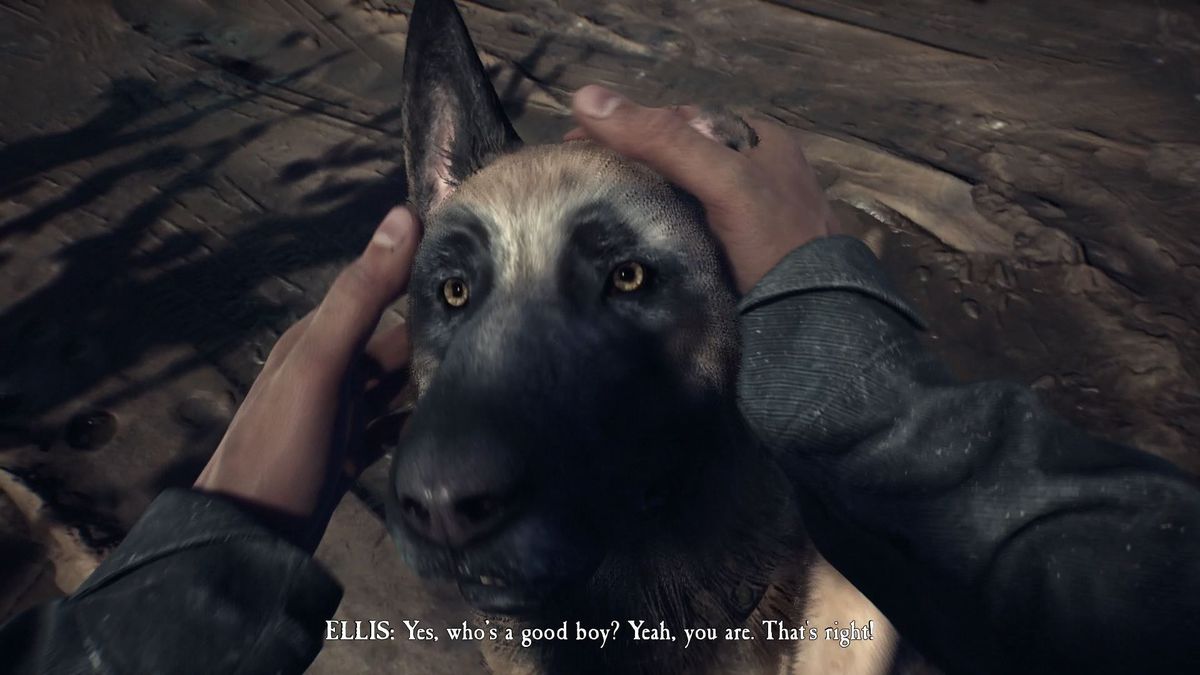 Reality has warped around Ellis — the woods now have concrete bunkers and trenches, impossibly placed vehicles, and ominous black vines pulling trees down to the earth. At one point, I stand beneath a tree and talk to my boss, who claims to be standing next to the same tree. We’re in separate realities, and I only have limited control over the physical and logical rules of the reality in which I find myself. The markers we rely on to keep ourselves safe, ideas that we take for granted, like the fact that down is down and time only moves in one direction, may no longer apply.

Ellis can find red video tapes shared throughout the woods. Not only do these tapes contain valuable exposition, but Ellis can also use them to change reality itself. One video depicts a child dropping a toy. If I pause the video when the toy is on the ground, there it is on the ground in front of me, ready to be picked up. If I let the video run to the point where the toy has been picked up and removed, it’s gone and I can no longer interact with it.

I can run through videos, stopping and pausing, as many times as I need. Sometimes, I need to return to previous videos to change reality in some way so that I can advance, which makes keeping track of what is shown in each tape, and how it might be used, a useful strategy.

I can also defend myself with Ellis’ flashlight and Bullet himself. Bullet growls and glares at monsters, allowing me to spot them and shine my flashlight on them. If I can’t see Bullet because he’s lost in some foliage, or it’s dark and I can’t spot the glint of his collar, I usually just spin in circles while I slowly take health damage and then eventually die.

It’s tough to get signal out in the woods.
Bloober Team / Lionsgate Games

Sticking with the themes from the movie, I barely even see the monsters. They attack from behind, and they’re mostly long-limbed, milky white blurs that flash through the woods as they hunt. It’s an effective way to keep the mystery alive while still delivering some good spooks to the player.

But dying isn’t that punishing; I just reload and go on my way. I’m more concerned about the long-term consequences of how I treat my good dog. The game warns me that my relationship with Bullet will alter his behavior — and my story — later in the game.

Knowing that raises the stakes considerably. First, I cannot risk any plan that leads to Bullet leaving me behind. Bullet is the only reason I’m not constantly lost, murdered, or stuck on a side path somewhere.

Secondly, why would anyone ever want to be mean to Bullet? Ellis has a menu of dog commands that include “pet,” “seek,” and “stay” If I want to be an absolute monster, I can select “reprimand.” I haven’t done this, because why would I? This is not a dog I’m in a position to yell at currently, thank you. This dog is the only reason I’m not stuck in an alternate hell dimension somewhere being ripped apart by whatever is hunting us.

Why would you be rude to this good boy who has never done anything wrong in his entire life?

The narrative only offers one compelling answer to this question: Ellis is an asshole. It’s hard to overstate how consistently rude and harsh Ellis is to the characters around him. Ellis immediately flies off the handle when questioned. A cutscene shows Ellis arguing with his ex-wife, refusing to accept any kind of help, and then growing increasingly abusive with her as she prepares to leave him. Ellis even snaps at Bullet, which felt like the last straw. This isn’t a pleasant man.

Frankly, it’s pretty upsetting that I have to bring Bullet along for this journey at all, because that dog is probably doomed. I need to know if Bullet survives, which was enough to get me invested in the story. The Blair Witch can go ahead and burn Ellis, or whatever it is she does to people, he sucks. But Bullet is just trying to help find a lost child! I just want to spam the “pet” command to let him know that I don’t blame him for any of this bullshit.

Blair Witch also claims to track player behavior in order to learn what scares them. I don’t know how this system works, or if it’s manifested for me yet. The promise of the game watching me, so far, is enough to inspire anxiety. I’m spending a lot of time petting Bullet and praying that affects some hidden algorithm into thinking I’m a good person who needs to live.

The mechanic of an ever-present, judging game, combined with Ellis’ terrible behavior, and reality constantly shifting around him, inspires dread in me. I feel like I’m marching toward the headsman, and it’s not entirely my fault. I didn’t choose to follow a horrible human being into the woods! Bullet and I are in the same position here; the circumstances are out of our control, and it’s not our fault. I can’t think of another game that made me wish the “hero” would get eaten by supernatural beings just so I could leave.

A smattering of technical issues also made it harder than it should have been to get nice and scared. Bullet froze over a clue at one point, and refused to move. I couldn’t interact with the clue, since Bullet was blocking it with his body. I had to run away for a solid minute, call Bullet to my location, and then run back to grab the clue before Bullet glitched over it again. Clues and game captions had occasional, distracting typos, and prompted actions could be a struggle. I had to stand in the right place and trigger my walkie-talkie five times before Ellis would bring up the plot event that needed to be discussed. These issues would often kill any momentum the game had built up, causing frustration instead of fear.

There is a satisfying atmosphere out in the woods, at least. Developer Bloober Team has created an ominous, intimidating forest that already looks haunted. The woods can be tricky to navigate, though; I’m constantly running into invisible walls, looking for paths, and generally being uncertain about where I am. Although, to be fair, that’s clearly the idea.

At least I have Bullet. I’m hoping that the dog survives at the end, because this precious pup deserves a second chance away from Ellis. The stakes are high in Blair Witch, as these woods aren’t known to take prisoners. But with two characters at the heart of this game, I only really care about one of them coming home alive.

Blair Witch is out now on Xbox One and PC. The game was reviewed using a final “retail” download code provided by Lionsgate Games. You can find additional information about Polygon’s ethics policy here.

The Last Of Us Part 2: Watch This Breakdown Of How The Game's Sweetest Level Was Made

Sony’s next State of Play airs Aug. 6
We and our partners use cookies on this site to improve our service, perform analytics, personalize advertising, measure advertising performance, and remember website preferences.Ok