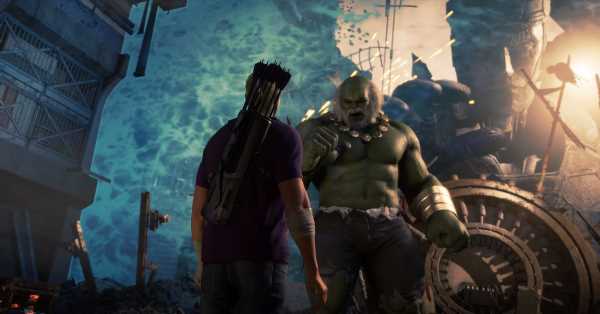 After months of promises and leaks, Hawkeye finally hits Marvel’s Avengers on March 18, Crystal Dynamix and Square Enix announced in a new video on Tuesday. The update also includes the free PlayStation 5 and Xbox Series X updates to the game and a new region.

A few months after Kate Bishop’s Dec. 8 arrival, Clint Barton (AKA Hawkeye) will join the Avenger’s Initiative. In the War Table video, Crystal Dynamics detailed the similarities and differences between the original Hawkeye and his protégé. Clint and Kate both use a combination of sword and bow on the battlefield, but their active abilities and arrow types are different. They also traverse the map differently, with Kate teleporting and Clint using his grapple arrows.

In addition to the new hero, Marvel’s Avengers’ March update adds the Future Imperfect Operation. This new mission set adds the Future Wasteland region, inspired by the Old Man Hawkeye comic series. The Wasteland is a future version of Earth 616, destroyed by nuclear war and a Kree invasion. The current timeline Hawkeye and the future Hawkeye will work alongside Kate and Lucky the dog to defeat Maestro — a far-future super-villain version of the Hulk with both brains and brawn.

The next-gen console version of Marvel’s Avengers includes the usual upgrades: increased visuals, a higher frame rate, and faster loads. Operation Future Imperfect and Hawkeye are both free for all Marvel’s Avengers players.

Tuesday’s War Table did not touch on Black Panther — the suspected next hero — or the absence of Marvel’s Avengers’ raid-like activity.