With the World Series set to begin in one day, Sony has announced next year’s iteration of SIE San Diego Studio’s beloved simulation baseball franchise: MLB The Show 20 is scheduled for release on March 17, 2020, and Chicago Cubs star Javier Báez will grace its cover.

That’s about a week early — the past five MLB The Show titles have all launched in the last week of March, just before opening day. For reference, next year’s regular season is scheduled to start on March 26, 2020.

“I am so honored and excited to be on the cover of MLB The Show 20,” Báez said in Sony’s announcement post on the PlayStation Blog. “I’ll never forget how it felt when I saw myself in the game for the first time (even as a backup!).”

The Puerto Rican-born Báez, 26, is the Cubs’ dynamic shortstop, nicknamed “El Mágo” (Spanish for “The Magician”) for his wizardry in the field and on the basepaths. But he’s also a formidable presence at the plate. Báez finished second in the NL MVP voting in 2018 with a .290 batting average, 34 HR, and a league-leading 111 RBIs. Coming off that career year, he put up 29 HR this past season even though he missed almost all of September.

Pre-orders are now available for MLB 20, which may be the last entry in the series to be released exclusively on PlayStation 4, considering that Sony will launch the PlayStation 5 in time for the 2020 holiday season. The base game will be available for $59.99, but Sony is offering three special editions: the MVP Edition for $79.99, the GameStop-exclusive Anniversary Edition for $99.99, and the PlayStation Store-exclusive Digital Deluxe Edition for $99.99. Pre-ordering any of them will grant customers four days of early access to the full game, starting March 13, 2020. You can see the details of the various packages in the image below and in the PlayStation Blog post. 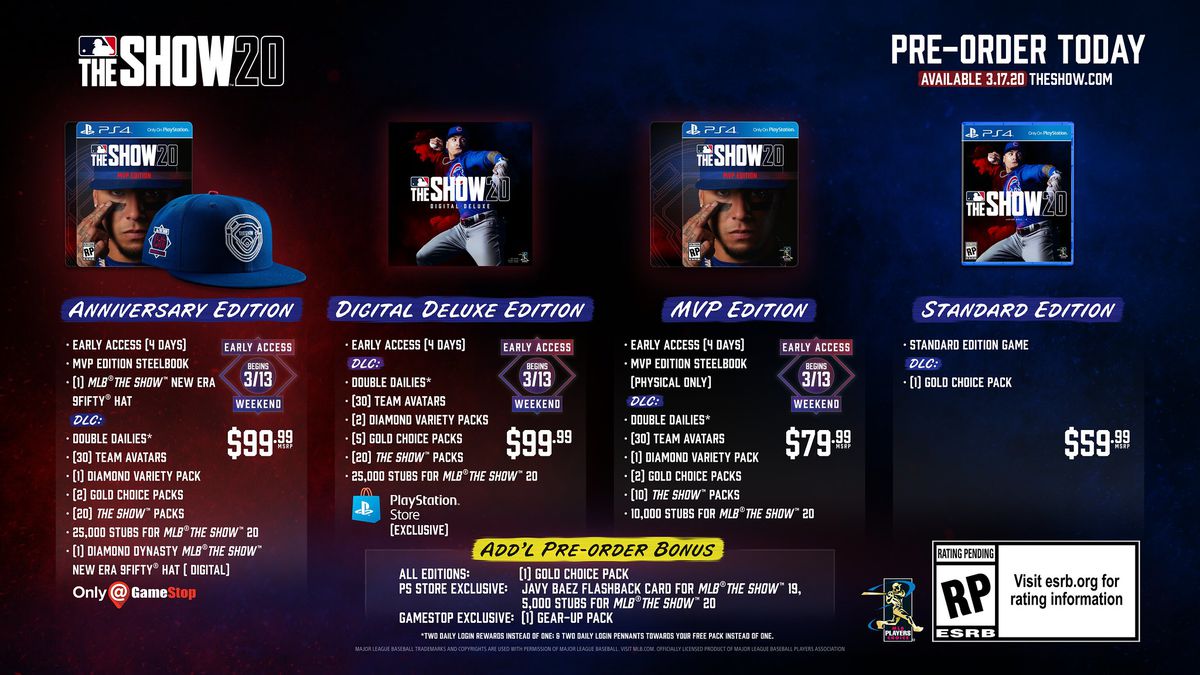