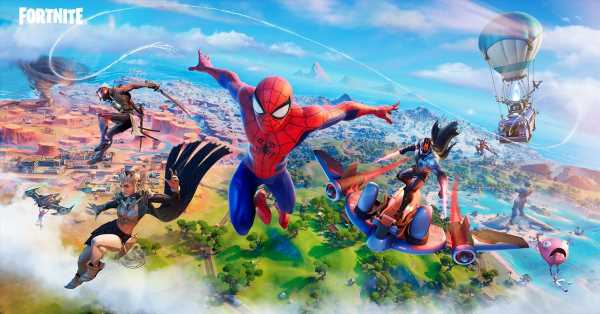 The world of Fortnite continues to develop at a dizzying pace. Now, with the arrival of its next big influx of new gameplay via Chapter 3, the game takes one more step towards becoming a true metaverse monster. The update includes a whole new map and dangerous new weather hazards like tornados. Spider-Man has just joined the game, and soon, Fortnite will bring the hero’s web-slinging antics to its giant cast of fighters.

Yes, that’s right. As of Dec. 11, you will be able to shoot spiderwebs and sling your way through Fortnite maps — and you don’t have to be wearing Spider-Man’s suit to do it. The new mechanic is technically an item you can use. That means any character — including Naruto or Ariana Grande — can pick this item up and use it, so long as you find it. Twitter user Yassin shared a video of the mechanic in action, via YouTuber Kanga.

From the looks of it, there are enough landmarks to grab onto and move throughout the map — the new update brings a map location that’s inspired by Spider-Man with landmarks like the Daily Bugle. Using the webs could really transform the way you traverse the map by allowing you to fly across huge areas. In addition to traditional web shooters that let you grab onto buildings, you can also web surf by shooting and latching onto a car, which will tow you down the street. It looks like fun!