The Outer Worlds feels sensibly designed; you can notice little decisions that developer Obsidian Entertainment made in order to limit the game’s scope. This is, by and large, a relief — it’s nice to have a relatively smaller-sized role-playing game that still has depth. I just have one regret, and it’s breaking my heart: I want to smooch the disaster men I’ve recruited to my ship, and the game won’t let me.

Many RPGs, such as BioWare classics Mass Effect and Dragon Age, and even prior Obsidian titles like Alpha Protocol, allow players to start a romance with their companions. Sometimes, there’s some smooching or sexy cutscenes. Usually, there are exclusive dialogue trees and conversations as player and companion figure out their relationship.

I absolutely live for this stuff; I romanced Kaidan in Mass Effect nine times before Mass Effect 2 came out and Garrus stole my heart. Most of my Star Wars: The Old Republic cast are happily married. I’ve been known to gaze longingly at photos of Alistair and Cullen from the Dragon Age games from time to time.

I’m married in real life; I’ve been with my now-husband since I was 15. Our lives are completely shared, and we healthily communicate through any problems that arise. We have a sweet, humble little life. I’ve never really dated beyond him, and so in the distance, I hear a siren song. “What if,” a sense of escapism whispers in my ear, “you dated a trash man who only knew how to cook by putting one cheap oven pizza face-down on top of another pizza and ate it like a sandwich?”

That allure calls to me, friends. 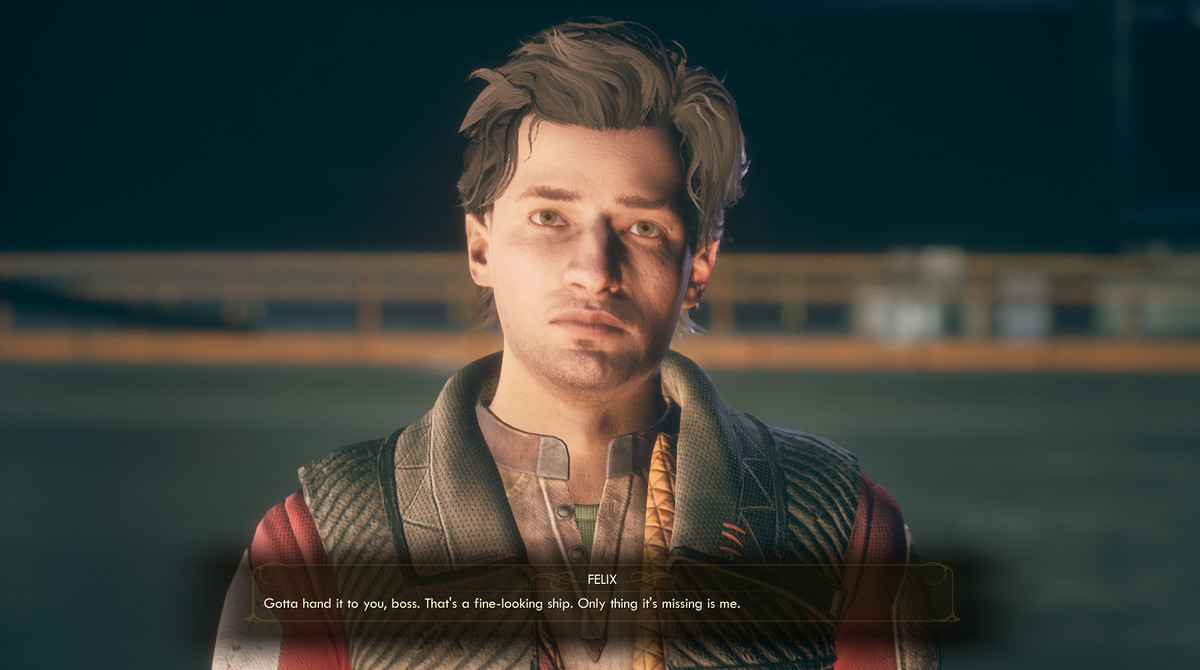 I love him.
Obsidian Entertainment/Private Division

Which is, of course, why I’m so terribly sad that The Outer Worlds offers no romance, even though there are two perfectly wonderful garbage boys I want to smooch. I understand why Obsidian made this decision; as the studio has said, it would have been a lot of work for a game that is very conscious of scope and size. But I was surprised at how much I missed the option, especially when characters like Parvati show Obsidian can write a wonderful romance involving my party member pals.

Vicar Max is an absolute daddy who spent time in prison. He acts like a cool-as-ice preacher with a heart of gold and noble aims, up until the point of his companion quest where he’s thwarted by a text being in French, and he starts yelling and cussing. He lies to the player character so that he can straight-up murder a guy over something petty.

Frankly, Vicar Max sucks, and that just makes me want to smooch him under the moonlight. Yeah, he’s a prick, but he’s an attractive jerk who’s perfectly well-acted. I’m not going to take any guff over my desire to run away with a priest who is also a complete daddy. Leave me alone. I don’t deserve that negative energy. 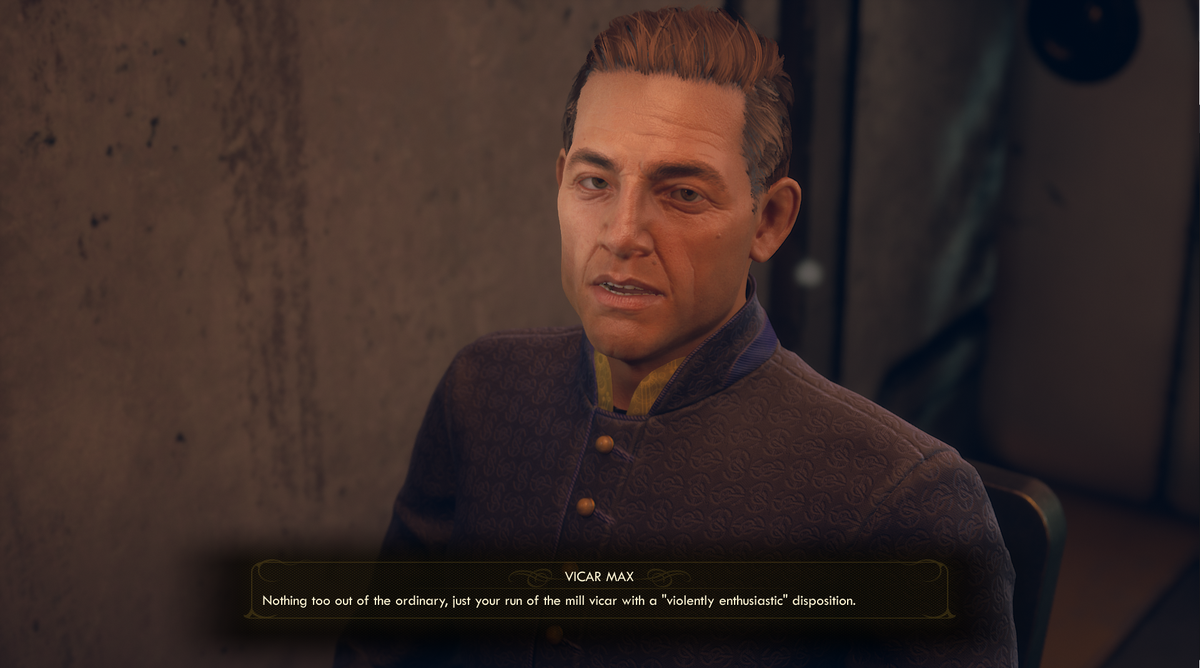 But if you think someone should look for a kinder, more noble partner, may I suggest Felix Millstone? Felix is a young dreamer who wants nothing more than to tear apart the corporations that have ground him into the dirt.

He’s also the kind of dude who would complain about jalapeños being in his food at a restaurant, and use the hard “j” while pronouncing the pepper to the waiter. He claims to be on the same tier as veteran hunter Nyoka, because he listens to all the adventure serials. Listening to Felix try to keep up with the team doctor, Ellie, or Vicar Max in conversation is like watching a Keystone Cops short. He’s trying his best, and the conversation is certainly moving forward, but there’s nothing elegant about it and everyone’s laughing at poor Felix for the attempt.

Don’t tell me there’s nothing appealing about that. I want to take Felix under my wing — and in fact, I did. He was with me throughout the second half of my “canon” run through The Outer Worlds. Did he add a lot to the party intellectually? No, but he was loyal, tough, and friendly throughout it all.

He’s cute, OK? My captain was swimming in bits by the end of the game, so it’s not like I need him to provide for me. He just needs to keep looking nice and not setting the ship on fire.

At the end of the day, my desire to run away with both of these garbage barges is a testament to Obsidian’s storytelling and character writing. They’ve definitely succeeded in creating characters I want to spend time being around. The problem is that they did that too well. Please, Obsidian, make a sequel, or at least a dating sim. Let me make bad decisions and smooch terrible men. I ask for so little, yet this would mean so much to me.

After all, now that BioWare has sunk so much time and resources into Anthem, a game with no romance or characters I would like to romance, there’s a gap in my life. I hope that if Obsidian chooses a different path moving forward, another studio steps in and rewards my patience with some dysfunctional yet engaging RPG romance.