Warning: Light Spoilers for Uncharted: The Lost Legacy Below

During a particularly tense point in the arc of their relationship, Chloe and Nadine find themselves rescuing an elephant that had been trapped by rubble after an explosion.

They manage to free the creature, but end up trapped on top of it as it flees through the jungle until they find themselves in a cavern with the rest of the elephant’s pack. The relative stillness of the “ride” sequence is a welcome moment of respite from the bombastic action sequences that make up much of the rest of the game, and using it as a moment for the two leads to resolve their differences makes it all the more meaningful to the experience.

I was surprised to learn, though, that this moment was never intended to play out as it did. According to Marianne Hayden, Naughty Dog’s Story Animator for Lost Legacy, the elephants were originally intended only to appear in the background of the Western Ghats – a large exploration zone in the early portion the game. The elephants would appear outside the playable area, but close enough to see moving and splashing around a pond. 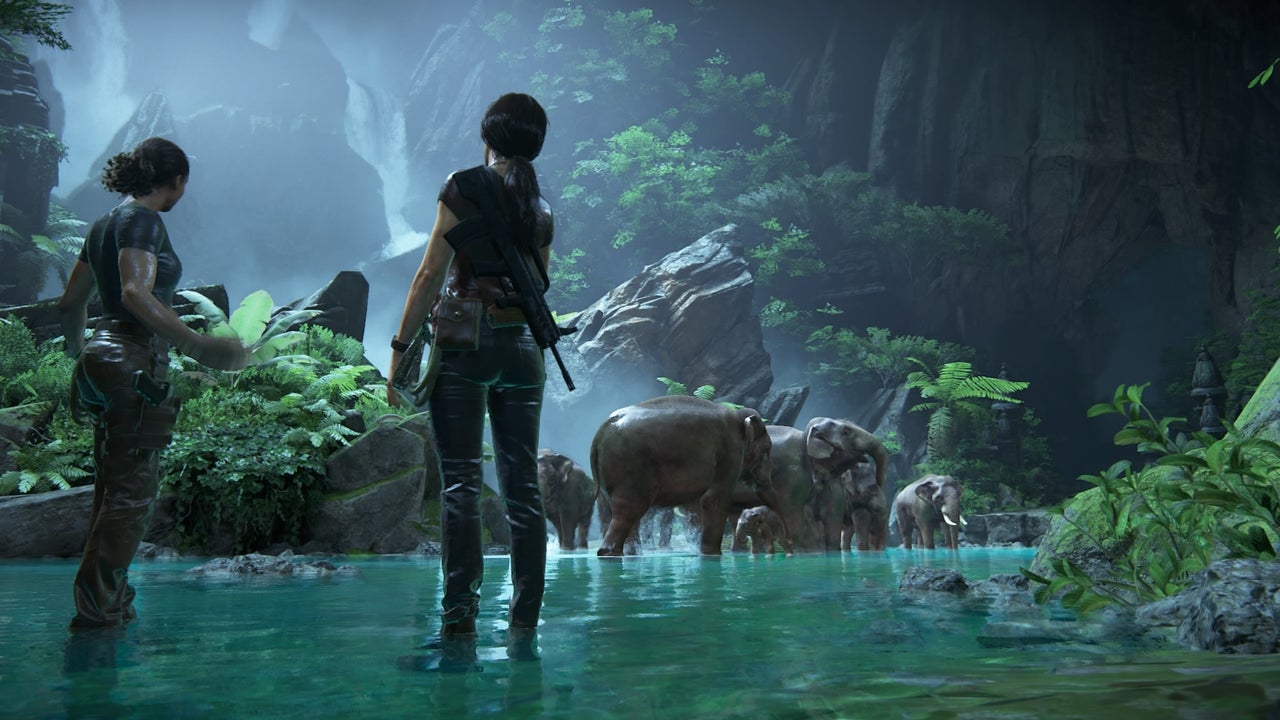 Naturally, this resulted in playtesters wanting to be able to interact with the elephants, and the world artists decided to give it a shot. Of course, using the “mouse/cookie” principal, we can see how that went from “background asset” to the full sequence that ended up in the final game. The initial interaction was still in the Western Ghats area, featured a pettable baby elephant and a Jurassic Park quote (“Just… think of it as kind of a big cow.”), and a bit of experimentation led to the elephant being rideable. “Who doesn’t want to ride an elephant?” Hayden laughed. “Once we allowed the player to ride the elephant, there was no going back.”

Originally, the asset used a scaled-up version of the horse from Uncharted 3 and was fully controllable – but this version was scrapped for a couple of reasons. First, the likelihood of a wild elephant allowing not one, but two humans – who are trespassing through their pack and for all intents and purposes a threat to their calf – to hop on for a ride instead of simply crushing them to death is very small. Second, once they made the decision to allow players to ride the elephant, they brought in wildlife experts who quickly confirmed that if you were able to fully control an elephant, it would mean that at some point in its life it had been trained, and thus very likely badly abused.

Not wanting to cover up animal cruelty in the name of a fun goof, full control of the animal was eliminated and the elephant encounter was ultimately converted into the sequence we know today. It’s a great reminder that giving small, often trivial-seeming ideas can lead to great things. “Story and gameplay are developed in concert,” according to Hayden. “One often does not come without the other.”

JR is IGN’s Senior Editor of Features, and would be 100% okay if they serialized ‘The Adventures of Chloe & Nadine.’ You can find him spouting more such nonsense on Twitter.