The middle ages were harsh. Deadly plagues ravaged entire villages, bandits laid in wait to pillage weary travelers, and those who survived even common illnesses could be undone by the era’s insane medical practices. But the version of the 14th century in A Plague Tale is even deadlier. After the murder of their parents, two kids discover how sacrifices must be made to survive in the wild. Sadly, A Plague Tale manages to be both a harrowing journey and a bit of a slog.

Asobo’s recreation of France circa 1349 is visually breathtaking, and its heartbreaking survival tale about two young orphans was so compelling I couldn’t look away. Amicia de Rune is a 15-year-old girl entrusted with the care of her kid brother Hugo. Meanwhile, Hugo is a sheltered, wide-eyed child stricken with a debilitating illness. Their journey forces both kids to wade through rivers of black, flesh-eating rats while dodging bands of patrolling Inquisition soldiers. Aside from a few awkward dialogue moments, A Plague Tale’s narrative is emotionally driven and earnest, and I was quickly absorbed by the political conspiracy that consumes these two kids.

As Amicia, you spend a fair amount of time holding Hugo’s hand, helping him climb over ledges, and shielding him from environmental dangers. I never felt burdened by Hugo’s presence; on the contrary, I felt something close to a sibling bond as I sheltered him from trouble, and I grew nervous every time I sent him off on his own into small crawlspace to unlock a door or fetch a torch. Hugo is an adorable and innocent child, and the relationship between these two kids is genuinely touching.

While A Plague Tale’s narrative had me racing towards the credits, the basic gameplay is full of speedbumps. One of the biggest threats to the de Rune children’s safety is a plague of black rats that scurry through the shadows and threaten to overwhelm any living creature. The rats are terrified of light, and most environmental puzzles involve finding fire and using it to create a safe path. A simplified crafting system allows you to create consumables such as explosives or rat bait, and I liked being able to control fire, but I rarely felt a need to scour the environment for crafting materials, because you often find the necessary components only a few feet from every puzzle. Also, most puzzles usually have an obvious solution, so instead of feeling like I was cleverly engineering my way out of a jam, I felt like I was just going through the motions.

When you’re not dealing with rats, you’re dodging Inquisition soldiers who have orders to separate you from your brother and drop your corpse in a rat nest. Amicia is equipped with a sling and can hurl rocks like bullets at enemy temples, and the generous auto-aim helps compensate for its clumsy controls. You’re generally better off running and hiding from a fight, but the stealth mechanics are weak. While I never grew tired of extinguishing an enemy’s torch and watching the rats swarm them, most stealth sequences tested my patience more than my wits. Enemies have basic patrol routes and the environments are so small that you often only have one route to your destination. As a result, throwing rocks to distract enemies has all the tension and pacing of hitting the button at a crosswalk.

A Plague Tale is a double tragedy. On one hand, Amicia and Hugo’s tear-filled journey through rural France is marked by adversity, but the bigger misfortune is how this powerful story of sibling love is soured by simple puzzles and clunky stealth mechanics. A Plague Tale is a forgettable game wrapped around a memorable adventure. 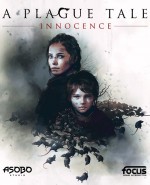 A Plague Tale excels in its narrative and setting, but the moment-to-moment action is uninspired