You wake up, dead. Wait, that’s not right. You were dead, now you’re not. After two years wandering the void, Martin Sheen’s terrorist organization rams robotic parts into your skull, or something, and now you’re Commander Shepard, cyborg extraordinaire and Jesus Christ with a buzzcut.

Who are these people? Miranda and Jacob, you’re one shady sentence away from me ditching fancy words for fancier space bullets. Get these dossiers out of my face, I couldn’t give two shites about some eejit called Archangel. Again, I am literally space Jesus – I’ll choose my own Gabriel, thank you very much.

Fine, I’ll have a look. Archangel is up in a tower sniping merc mechs as if it’s nobody’s business. Turian, I’d guess, by the shape of the helmet. He’s alright, actually. Hates bad guys and has the conviction to act on that hatred. “Never fear, for Commander Shepard is here” I shout as I bust through the door and take up arms alongside this rogue renegade. We clear out some bad guys and Archangel turns to say thanks.

“How cool would it be if this was Garrus,” I think to myself, remembering everybody’s favourite calibrations whizz from Mass Effect.

You’ve got to be shitting me. 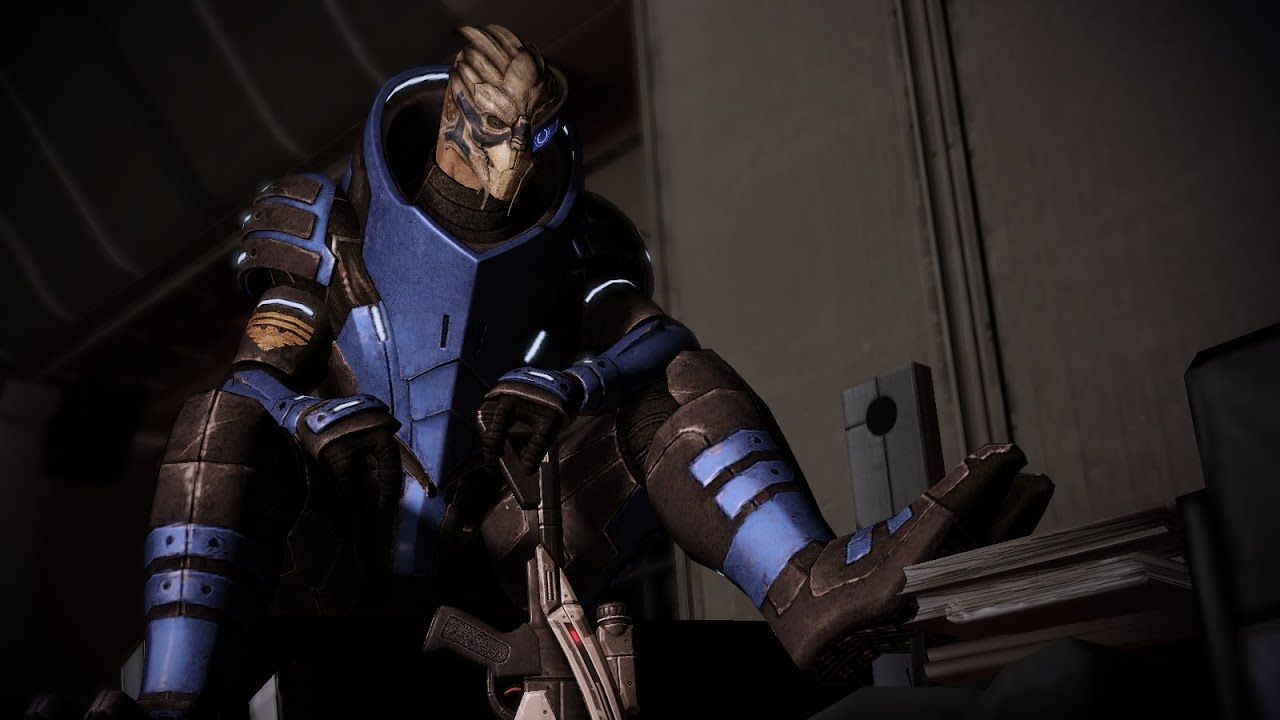 It’s as much a spectacle in 2021 as it was in 2010. This time around, I know it’s Garrus, but that changes nothing. It’s the way the mission is designed and the scene is framed that makes it a real show-stopper. That scar Garrus shows up on the Normandy with? Nothing compared to the damage done to my lower jaw after picking it up off the sitting room floor.

What’s most amazing about all of this is that an enormous amount of people never got to experience the moment the way it was intended. The first Mass Effect was Xbox-exclusive until 2012, meaning that a huge number of players’ introduction to BioWare’s revered space opera was Mass Effect 2. If you’re meeting Garrus for the first time when he takes off his helmet in Omega, you’re probably just like, “How do I know this bird guy?” Because he helped you in the first game! Ashley is rubbish, Kaidan is okay but not until Mass Effect 3, Liara is cool but crap in combat, and you can’t just knock about the Milky Way with Wrex and Tali exclusively. There’s no way you didn’t bring the ex-C-Sec sniper prodigy with you to Ilos. I just don’t believe you.

This is why I’m so glad that Mass Effect Legendary Edition is convincing people to play the trilogy from start to finish. I mean, you really need to play the first game in general just to get the proper context for the series at large, but individual moments like these are the flickers of greatness that combine so the series as a whole can erupt. I was 16 when I played these games in 2012. I spent most of my time playing football and drinking €1 cans in fields. Mass Effect 2’s Archangel reveal was one of the key moments in convincing me that games could be so much more than Charizard and Call of Duty. Keep your cans and bollocks to your Tuesday night training, says I – I’m off to Tuchanka with my main mandible man.

Mass Effect 2 is packed with stellar introductions, to be fair. The first game makes a mess of most of them, but Grunt’s first and second scenes in Mass Effect 2 combine for the two best intros in video game history. I’d be inclined to say that Archangel is probably third-best, but it’s my own personal favourite – and Garrus isn’t even my favourite squadmate. It’s the heat of the moment, the tension of being surrounded by more mercs than Jeff Bezos can buy, all leading up to that single second of sheer brilliance. Honestly, I might just save before the end of the firefight, right before the cutscene, and reload it 20 times just to go “holy shit!” over and over again. It never gets old, and it’s one of the most phenomenal scenes to ever appear in a video game.