About 20 minutes into Assassin’s Creed Valhalla: Wrath of the Druids, I find myself leading a raid on a monastery located less than five kilometers away from my real-life house. I should specify: the monastery isn’t there anymore, having been demolished during a similar Viking raid over 1,000 years ago, and I’ve never been to the island because it’s privately owned (for some weird reason, it also has a local colony of 100 domesticated, absolutely-not-indigenous wallabies). As for my house – at least where it should be located – there’s little more than a hilly meadow teeming with pretty flowers in Valhalla, as opposed to one of hundreds of thousands of suburban properties in contemporary Dublin. The disparities are certainly a bit jarring, and yet it feels as if I know this place – I make my way to Dublin City, still an enormous Viking port in this world, without even looking at the quest marker.

I’ve clarified all of the above for two reasons: one, Wrath of the Druids offers an exceptionally accurate take on Ireland, and two, I’d be the first person to tell you if it didn’t. I’ve lived here my whole life and am particularly well acquainted with my heritage, from history to mythology, to culture and the Irish language. Since I was little, I’ve always thought the stories I grew up with would make fine material for a game. Ireland in the 9th Century was a land of many kings, raw and vital and untamed in a way that rivaled even the most legendary Viking drengrs. In fact, the Vikings were almost immediately unsuccessful in their attempts to subdue the Irish people – they were defeated swiftly and decisively, and so the overarching tone of Wrath of the Druids is radically different from the base game that precedes it.

This is actually where our story begins in Wrath of the Druids. After voyaging across the Irish Sea, Eivor is reacquainted with her cousin, Barid mac Imair, revered Norseman and King of Dublin (Barid is an actual historical figure, by the way, so seeing him portrayed so excellently in the Valhalla DLC was a real treat). Although he already has his crown, Barid is in the process of earning the favor of Flann Sinna, soon-to-be High King of Ireland. In general, the political ties in this expansion are far more sincere than in the base game, with the main antagonist being a ritualistic cult as opposed to an adversarial force joined solely by a shared nationality. Also, when I hear Sinna being pronounced “shin-na,” I almost leap out of my seat. Proper pronunciation of an Irish name? Am I dreaming? 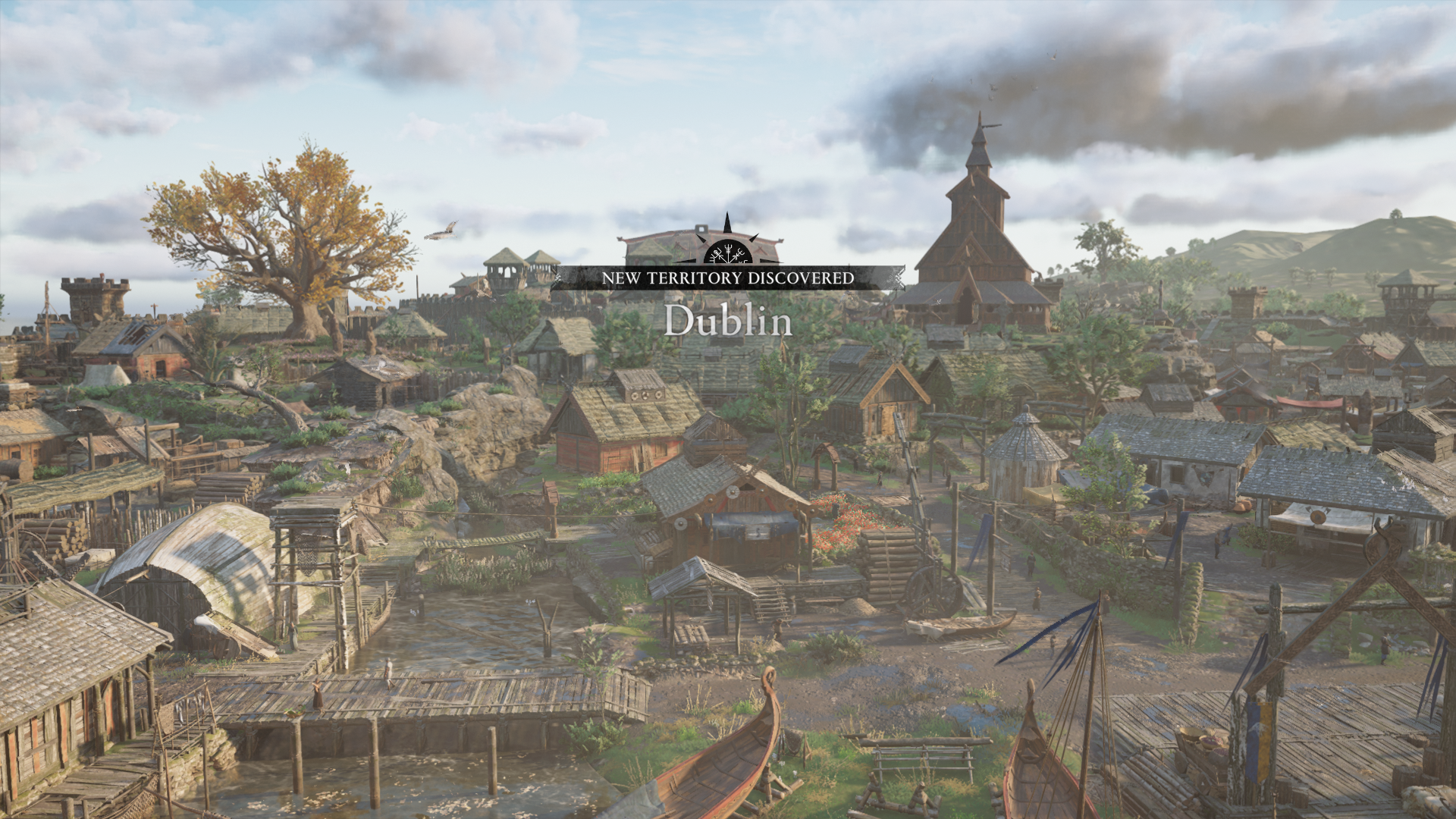 After pinching myself 500 times, I’m finally convinced that I am, in fact, awake. And so I go for a stroll around my island – yeah, it’s mine – and judge everything with an eye keener than my own name (Cian, pronounced keen, not cyan, cheers). Anyone acquainted with a map of Ireland might see that Meath, which stretches far to the west of Dublin in Valhalla, is not in its 21st Century location directly north of the capital. This is correct – Meath, previously known as the royal county, was enormous at the time the Vikings invaded. As I gallop across its pastures and precipices, I see Lynx cats – bona fide Celtic Tigers, once extinct but recently reintroduced to Donegal in all of their pre-extinction glory. I see Irish wolves and wolfhounds, foxes, squirrels, and leapfrogging hares. I see fools and firebrands jesting over drinks, bantering away and chancing their arm at any trick or treat within reach, before waking up the following morning and intermittently spluttering “dear Lord, let me die” between bouts of said drink enacting its violent vengeance.

Best of all, though, is how remarkably clear the core thematic premise of this entire DLC is: this is not just about the Norse and the Gaels – it’s about the Norse Gaels. As accurate as the Irishness of Wrath of the Druids is, right down to the musicality of the accents and ubiquity of the folklore that informs them, this is a period in Irish history in which two exceptionally vast and varied cultures slowly began to define one another. You might not think of an average Irish person in the same way you would a Viking, and yet Dublin is potentially the most iconic archetype of a Viking port – a heritage that is celebrated and preserved to this day. This is why Valhalla’s decision to present Wrath of the Druids as a collaborative endeavor against a mutually recognized evil is so effective. Sure, there are prejudices here, hesitations in trust born of past woes – but there is also respect, and affection, and a legitimate interest in learning. This entire expansion examines the most pure genesis of the Norse Gael, to the extent that random NPCs in towns often appear to be speaking in some kind of creole language – I pick up words like “iarracht” (effort) and “mhachaire” (plain with a séimhiú, a h taken to satisfy grammar), but can’t for the life of me recognize much of the sentence surrounding them on account of it not being “as Gaeilge” – in Irish. My only conclusion is that these are Norsemen speaking – mostly evidenced by their dialect – and that they have opted to fuse their own language with Irish, which is what generally happens when any two countries come into immediate contact with one another throughout history. 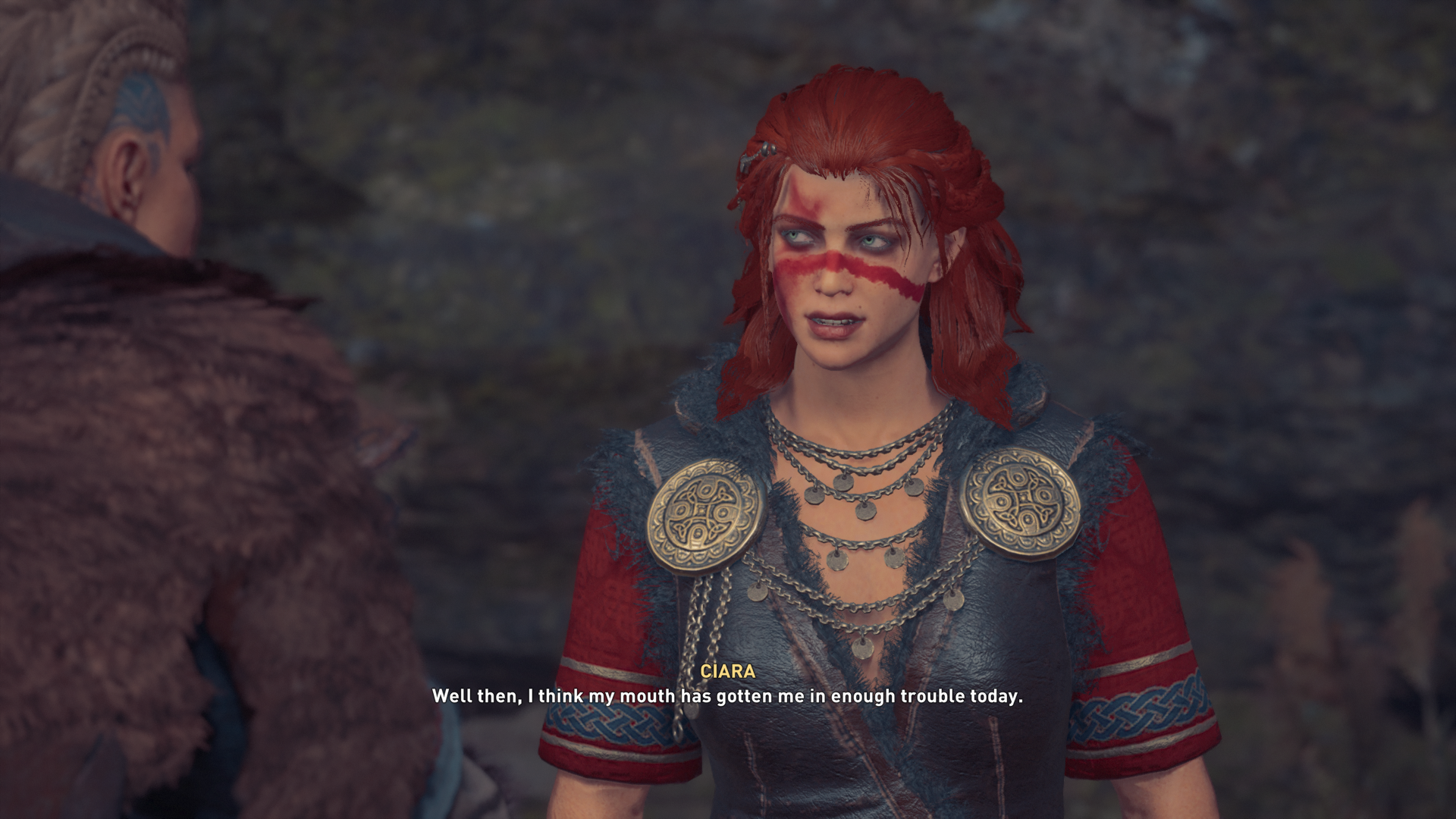 There are concessions to this, too. Naturally, some accents are a little bit too animated or leprechaun-esque – this occurs very seldomly, but the DNA is there. I’d liken this to what Eivor actor Magnus Bruun told me a couple of months ago – that the team wanted to refer to locations in the original Old Norse, but it would have been difficult for modern audiences to parse. As a result, I don’t think this is a bad thing – I’d rather people have a very accurate idea of historical Ireland that’s actually comprehensible than a perfect replica that appeals to no one. This is for a global audience and it still remains both historically and mythologically sound, right down to architecture, anthropology, petty political squabbling, and – most importantly of all – competitive drinking.

It is remarkably modern in its approach to these disciplines, too. This is a period in which there is enormous tension between Christians and pagans, which exists even prior to the arrival of the Odin-worshipping Vikings. The Catholic Church as an institution once held absolute power in Ireland, but has since been exposed for unspeakable crimes, some of which it has not yet been held accountable for. It’s subtle in Valhalla, but there is a lot to be said about how priests can be deceptively presented as inherently good and graceful, despite being nothing of the sort. Valhalla’s harmony largely lies in more secular communities, whether or not these congregations initially occur unbeknownst to their attendees. I don’t want to clutch at straws, but had this DLC glorified an Irish Church institution, I would have been deeply disappointed. I’m glad to know the developers at Ubisoft are familiar enough with contemporary Irish culture to have recognized that pitfall miles before stepping in it. 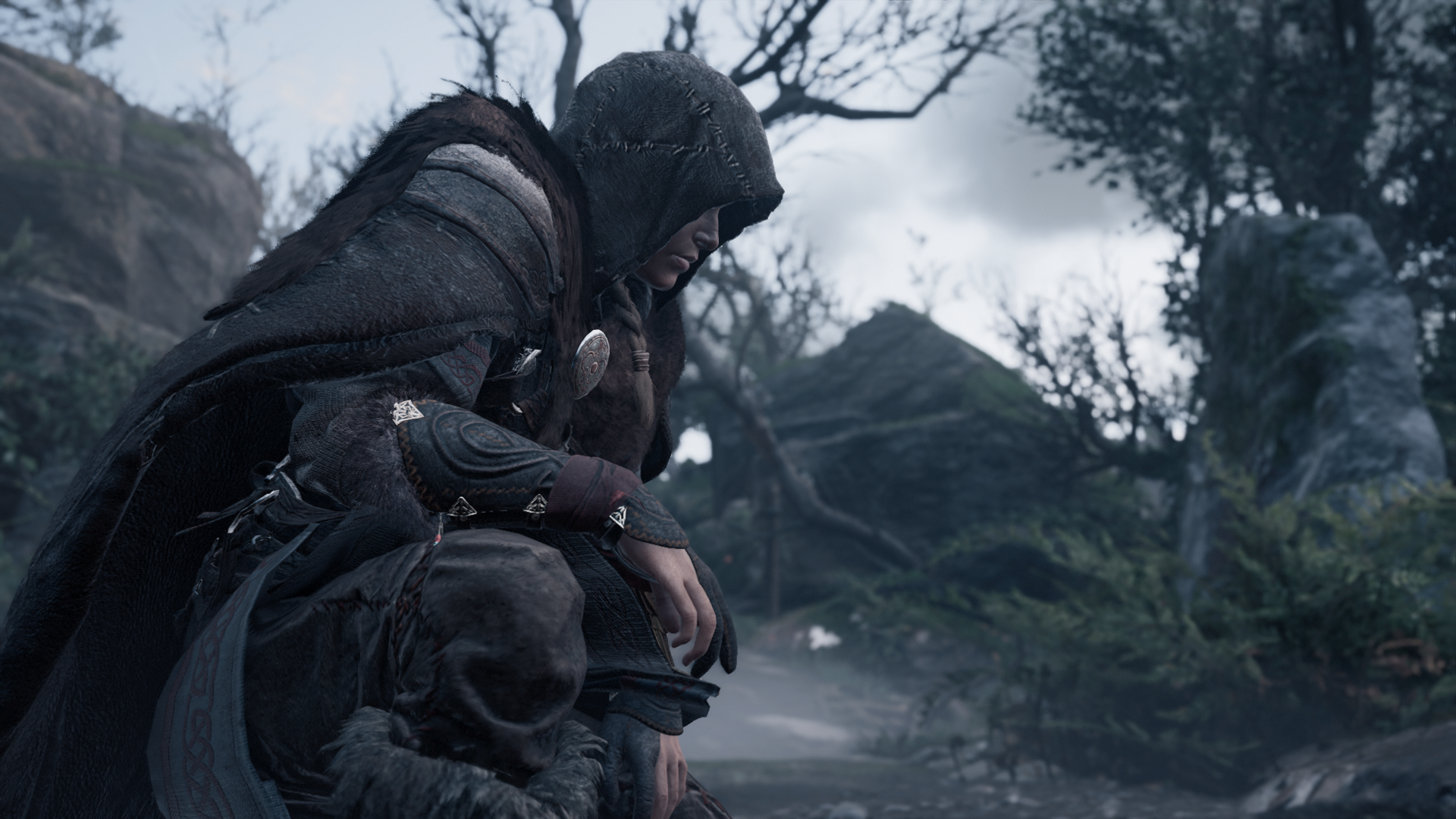 Outside of all of these dynamics – the relationships between Norse and Gaels, and how that informs Norse Gaels, and how that in turn forms a unique ideology – Wrath of the Druids lives up to Valhalla’s strengths without succumbing to its weaknesses. It is gorgeous and dense, glens and grottos texturing creeks and crags as momentous mountains loom large over meadows and marshland below. In many ways it feels like a purer distillation of the base game’s magic, because despite the majesty of this wild and roving landscape, there is far less bloat here. You may be standing on a precipice high above a great deal of natural nothingness, but it’s not placeless – the structure of both the game and the country it represents are always clear in a way that makes the world feel extremely large in spite of how cleverly close everything is.

There are other niceties, too. You can summon an Irish wolfhound, for example, and some of the enemies are new – Boar Druids in particular are a pain in the arse. The biggest change to combat, though, is level design – ring forts are far more conducive to both typical Assassin’s Creed stealth and Vikingr brawls than sprawling castles, and there are some excellent set piece encounters in which mobility constraints are used to excellent effect. Aside from that, you flit between landmarks on wolfback, swinging akimbo axes and cracking skulls with bloodied arrows just as you do in the main game. There’s romance and consequence and all of the good stuff, but you already know how that works and you know Valhalla has it nailed. The bulk of what’s new here has to do with historical context and reexamining your view of Eivor and those around them in the base game – it emphatically expands on Valhalla like any good expansion should. I mean, it’s right there in the name: expansion. 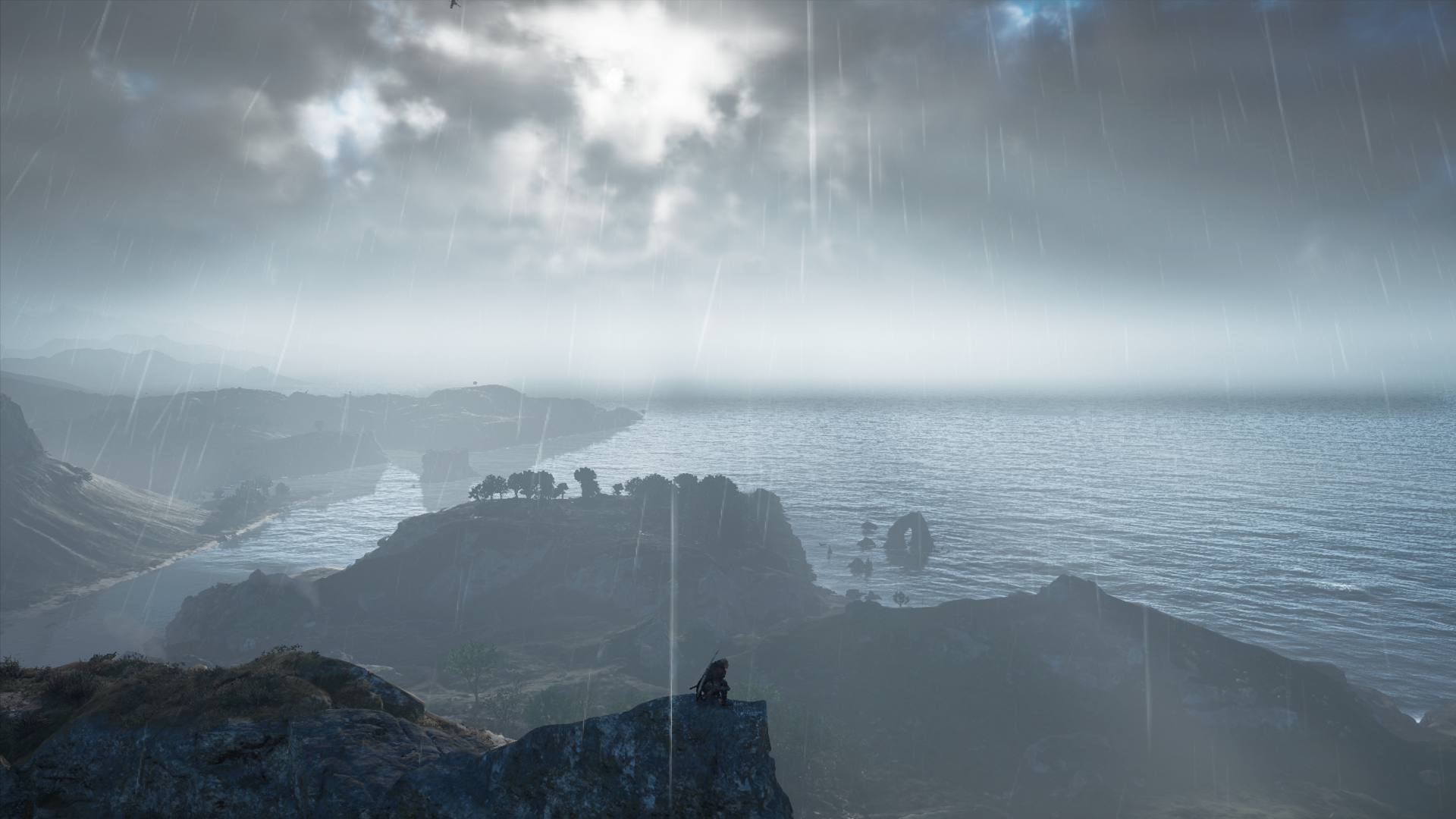 Wrath of the Druids is a smorgasbord of Norse and Irish history and mythology that is impossible to stop gorging on. Ciara tells tales of The Morrigan feeding on the deaths of fallen heroes in order to infiltrate the minds of mortal men, while Eivor retorts that war is already our fate and destiny, with Ragnarok looming large over life like an ever-encroaching cataclysm. Baldur’s blood is invoked while the Almighty’s wrath is feared, Irish songs float alongside Danish hums, and the entire experience is one of two cultures becoming intertwined like a perfect DNA helix. It is a remarkable achievement both in historical representation, mythological association, and sheer, unbridled design. I would have been the first person on Earth to take issue with this game if I felt the need, and I’d have shouted it to the heavens until Thor himself hurled a lightning bolt at me – instead, I want to use this review to tell you that yes, you should play Wrath of the Druids, and yes, there’s probably a bit of Norse in most of us Irish folk – that’s probably why we’re even better drinkers now than we used to be. As Flann Sinna says in Wrath of the Druids, “sláinte” (cheers). What are you waiting for? Go play it already.