The original BioShock was a phenomenal game. The visuals, story, now infamous twist, and phenomenal atmosphere all stay with me to this day. However, one part of the shooter that is almost universally despised is its hacking minigame. You put down the guns and plasmids to become a plumber, pausing the world around you to guide some blue goop through a series of pipes. It’s the Mario game no one asked for and even fewer enjoyed. While BioShock 2 didn’t contain a “holy shit” moment on the same level of the first game’s “Would you kindly…?”, it did vastly improve almost everything else, and doubly so when it comes to the hacking.

The first game immediately immerses you in Rapture, the leaking, underwater city full of murderously creepy Splicers – these are people who have transformed themselves into vulgar monstrosities due to their overindulgence in sea slugs that rewrite their genetic code. Look, video games are weird, okay? The thing is, this immersion often relies on tension. There’s a feeling of dread that pervades Rapture – it’s dark, dingy, and it could collapse at any moment. Every shadow could be hiding a killer Splicer, every creak could result in a cave in – the atmosphere is perfectly perilous.

This quality carries over into combat. The environment can be used to your advantage by electrifying bodies of water, setting oil slicks ablaze, and hurling heavy objects at foes with telekinesis. Fighting Big Daddies, the hulking, drill wielding guardians of the Little Sisters – horrifying Eldritch nightmare children who drink the blood of the dead – is a nerve wracking process that requires planning and preparation. Part of this process involves hacking turrets and drones, so all of a sudden, you’re dragged out of an intense fight for your life and plopped into a plumbing simulator. 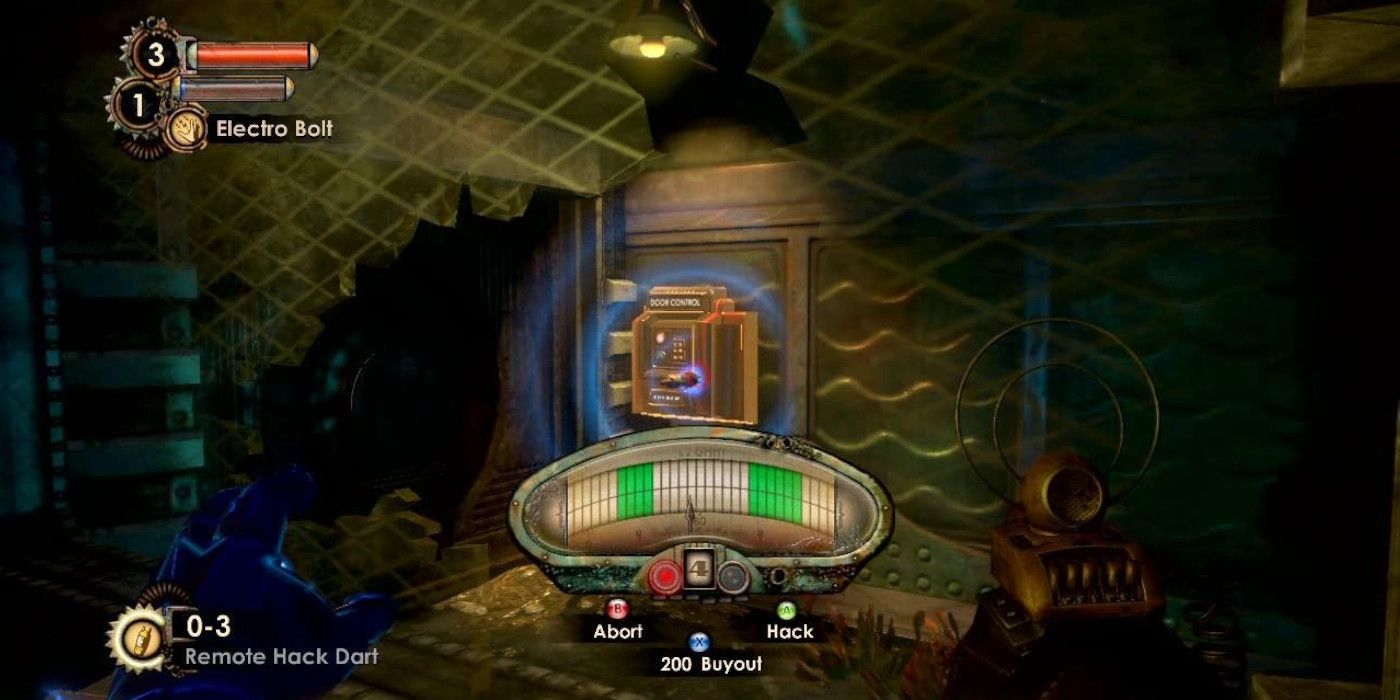 BioShock 2 fixes this. Instead of pausing the action, hacking happens in real time. You can’t stop the fight and get a turret to aid you anymore, if you need an extra gun, you have to hack it while you’re swarmed by drugged up denizens of the deep. Gone is the weird plumbing, now you have to hit a button as a sliding needle swings past the correct spot on a dial – like the reloading in Gears of War. This simple system allows you to hack things on the fly in the middle of a fight. It strikes a great gameplay balance by being hard enough to force you to pay attention to what you’re doing, but without completely pulling you out of the world and into an entirely separate minigame.

BioShock 2 had many other worthwhile gameplay changes: dual wielding weapons and plasmids, less sluggish controls, and better upgrades, but the hacking improvement makes you feel far more immersed in the city of Rapture. It enables you to stay in the fight while also desperately trying to hack things to get an edge up on your foes – in the immortal words of Pablo Navarro, “Sure, the boys in Ryan’s lab can make it hack-proof. But that don’t mean we ain’t gonna hack it.”