In the not-so-distant future, a dying Earth has caused its inhabitants to look for a new planet to call home. After decades of space travel that leave its passengers suspended in time, the bold group given this monumental task sets foot on a new world. At first glance, this faraway planet is idyllic, lush, and peaceful — a place where humans can feel right at home. But not everything is as it seems, and this new world soon turns out to be teeming with hostile creatures and mysterious forces beyond human control.

Oh, have you heard that one before? OK, I’ll admit it — Outriders, the forthcoming co-op shooter from developer People Can Fly (Bulletstorm, Gears of War: Judgment ) and publisher Square Enix, definitely gives off some familiar vibes. Due out this holiday season and making its debut on Sony and Microsoft’s next-gen platforms (along with PlayStation 4, Windows PC, and Xbox One), Outriders follows the titular group that’s traveled to the planet Enoch ahead of everyone else in hopes of setting up a habitable place for the survivors of the human race. What they find is a mysterious signal and a world marred by devastating storms called “anomalies” that infect and destroy the crew. Before long, there’s a mutiny as the infected are shunned, and in the ensuing scuffle our daring hero is mortally wounded, leading to another stint in suspended animation. When they wake up, decades have passed, and Enoch has become a war zone.

Described as a “very ambitious RPG shooter” by People Can Fly CEO Sebastian Wojciechowski, Outriders has been in development for about four years — or since right around the time of the studio’s split with former parent company Epic Games. After working with Epic on the Gears of War series and Fortnite’s Save the World mode, PCF wanted to get back to making its own games. Enter Outriders, a sci-fi universe built from scratch that grafts RPG elements onto its third-person shooter backbone. 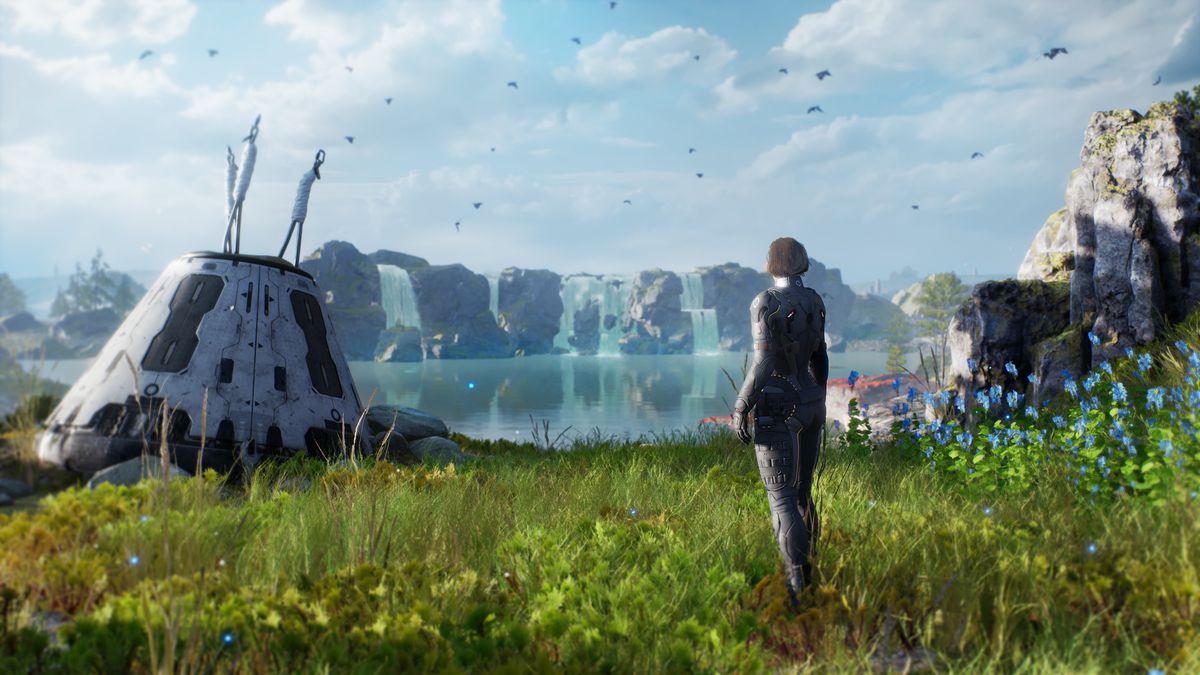 After keeping it within the Poland-based studio for the last few years, Wojciechowski and his team at People Can Fly showed Outriders to the media for the first time earlier this month. Its visual identity was described as “sci-fi meets savagery,” with a structure that gives players “a lot of freedom,” game director Bartek Kmita told Polygon. From the opening character creator to skill trees, difficulty options, co-op capabilities (you can play alone or with up to two pals), and different classes, Outriders does a lot to make you feel like you’re in control of how you play — even if many of its ideas have been seen before.

For starters, you’ll create a character from scratch to serve as your protagonist for the game. I was a bit disappointed by the character creator in its current form, as the choices were a little shallow: Beyond a simple male-or-female gender alignment, you can choose from a handful of hairstyles, skin colors, some barely-there makeup, and scars or piercings to give your Outrider that battle-worn look.

Personally, I could spend hours creating a custom character, but I wanted more depth from Outriders — for example, there were only five hair colors and few options for darker skin tones. While Kmita couldn’t say how many options the completed game would have, he did reassure me that character customization was still “under development.” 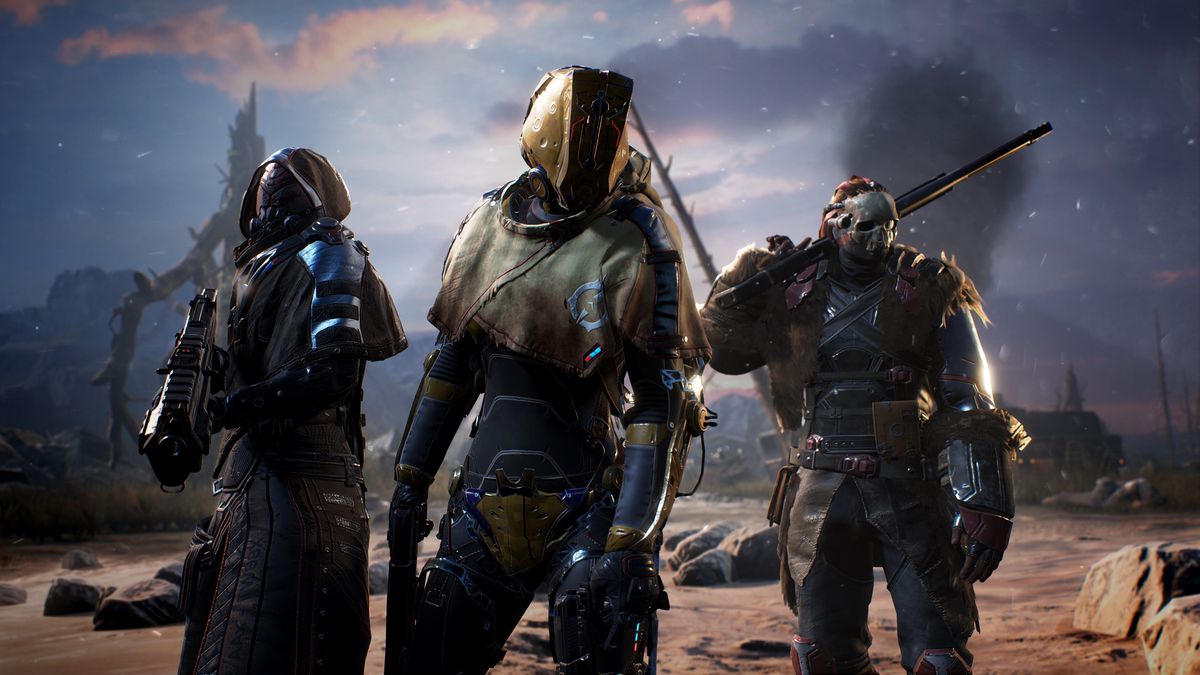 Let’s get the obvious comparisons out of the way: Outriders feels a lot like Destiny meets Anthem with some Gears of War thrown in. It has Destiny’s sci-fi DNA, Anthem’s otherworldly action, and Gears’ third-person perspective and convenient chest-high cover scattered throughout Enoch. It’s also got some ideas of its own, but during my two-hour playthrough, I couldn’t help but make juxtapositions to those other games in my head.

While Outriders feels like a shooter first and foremost, it’s definitely heavy on role-playing elements. There’s a leveling system and a skill tree; there are side quests to chase and dialogue choices to make. After the single-player prologue, you’ll choose one of four classes, which will determine your character’s powers for the rest of the game.

Only three classes were available at this play session, with the fourth still under wraps. There’s the Pyromancer class, which is exactly what it sounds like: They wield fire and use it to burn enemies to a crisp. The Trickster is more of a close-range class, with time-manipulation abilities that allow hit-and-run attacks. Then there’s the Devastator, which is essentially a tank. I went with the Pyromancer because its mid-range attacks most closely aligned with my own play style (but also because playing with fire is cool). 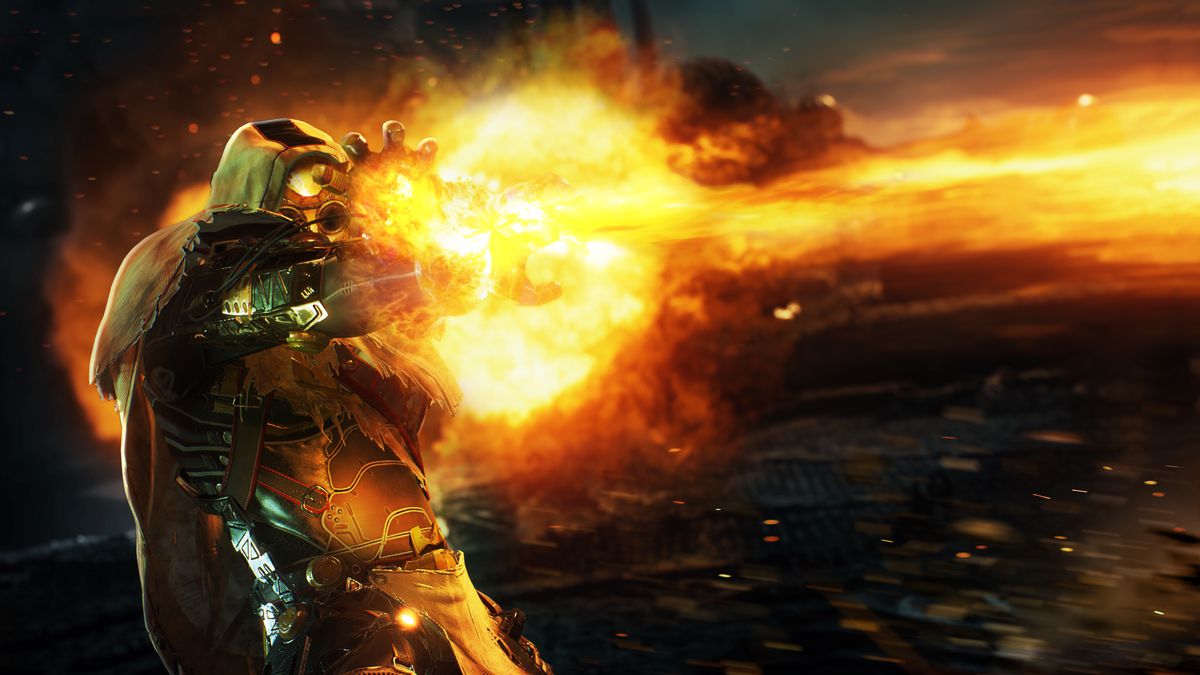 It’s not that we haven’t seen difficulty levels before, but Outriders makes it part of its DNA, rewarding players as they unlock new options without forcing them into a challenge they’re uncomfortable with. Kmita told us that World Tiers were part of an overall development strategy of encouraging players to try different strategies. Those who want to focus on the story can breeze through on a lower World Tier, while players looking for a real challenge can crank it up as they go.

It’s when Outriders presents the player with new ideas like this that it gets really interesting, and I wish I’d seen more of that in my demo. For example, during a presentation, PCF promised a “twisted and beautiful” aesthetic to its customizable weapons, mixing the organic with the mechanical. On the other hand, the weapons available in the first couple hours are pretty standard varieties of shotguns and assault rifles. I got the feeling that there was something more lurking beneath the surface, but I didn’t have enough time to get there.

The more I think about Outriders, the more I want to find out the rest of the story. We’ve been to outer space before, sure, but Outriders shows that there’s still room to explore out there. What’s behind Enoch’s anomalies? Why does it tear some people down to the molecular level and bless others with superhuman abilities? What’s the mysterious signal broadcasting from the planet? I don’t know, but I want to.

But here’s the important thing: it’s a lot of fun. The action is fluid and satisfying, even if it feels familiar. Kmita told me that the developers looked to the games they were playing to determine what sort of genres and features they liked; they wanted to make a game they’d want to play. 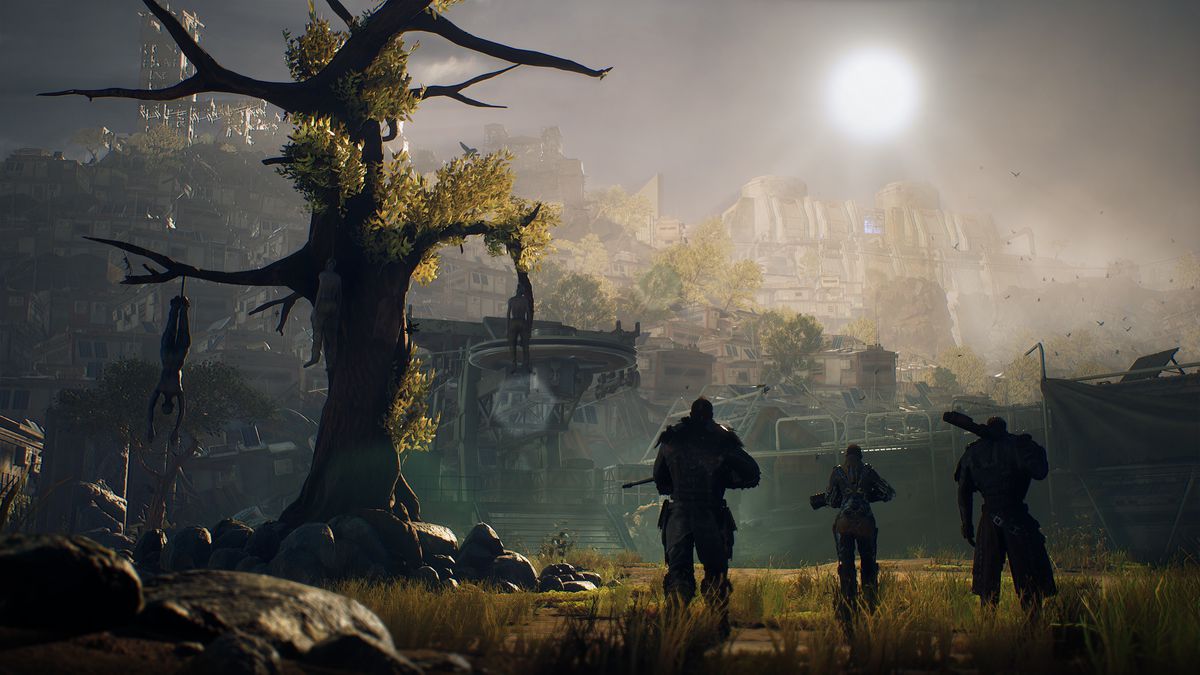 “On the one hand, it’s scarier,” Kmita said of working on the studio’s first new IP in a number of years. “We’ll have to figure out … how to create the gameplay from scratch.” But at the same time, “It’s super exciting, to be honest.”

Lead writer Joshua Rubin, who previously worked on franchises like The Walking Dead, Assassin’s Creed, and — yes — Destiny, echoed Kmita’s sentiment. “It’s such a different experience because working in a known IP, it’s like writing historical fiction … Whereas creating a new IP with a group of people as a group of creatives, it’s more like… building this fantasy castle in the air that you’re all describing different sides of to each other and then you get to go play in it.”

You’re probably hoping to know more about People Can Fly’s experience working with the PlayStation 5 and Xbox Series X, but Kmita and Rubin remained tight-lipped when it came to any details about the next-gen consoles. For the most part, the next generation of PlayStation and Xbox remain a mystery, but at least we know one game we’ll be playing when they launch later in 2020. Hopefully with a few new hairstyles.

PS5 Will Support PS4 Accessories, But You Can't Use The DualShock 4 For Next-Gen Games

13 Sentinels: Aegis Rim Trailer Prepares You For Doomsday Ahead Of Release Next Month

NHL 21 Pre-Orders Are Available–More To Be Revealed This Month
We and our partners use cookies on this site to improve our service, perform analytics, personalize advertising, measure advertising performance, and remember website preferences.Ok