The Call of Duty franchise began its life grounded in history, but over the last decade, its subject matter has gotten more and more extreme. In the last few years, Call of Duty has made headlines less for historical accuracy and more for things like space warfare, a trend-chasing battle royale mode, and Nazi zombies.

2019’s Call of Duty: Modern Warfare is moving away from all of that, with developer Infinity Ward stripping everything down to create a fresh experience that the studio says is “authentic and gritty.” And while “fresh” might not be what comes to mind when you’re talking about a game that shares a name with a 2007 entry in the same series, this year’s Call of Duty is only part reboot. It will have some familiar faces and tap into the nostalgia that gamers feel about the Modern Warfare subseries, but as design director Geoff Smith said during an event in Los Angeles earlier this week, it’s also about “trying to get away from the perception of what Call of Duty is.”

Before letting influencers and the media get their hands on Modern Warfare’s new and improved multiplayer, Infinity Ward creative director Pat Kelly led a presentation about Call of Duty’s “dogma,” or its guiding principles. First of all, he said, “gameplay is king.” He also stressed the “authentic and gritty” experience Modern Warfare is aiming for, stating that its soldiers are “ripped from the headlines” rather than being “superheroes.”

Other important doctrines: Call of Duty should be “badass fun,” with state-of-the-art technology bringing each map and level to life. Another important facet is having a unified experience, which means making sure everything works the same way across all systems, whether that’s the campaign or the various multiplayer modes.

Kelly said that the studio wanted Modern Warfare to be “the ultimate multiplayer playground.” It’s true that it will bring players from different platforms together like no other Call of Duty has, thanks to console and PC cross-play and to getting rid of the series’ season pass — making all additional maps and downloadable content free is just another way to level that playing field. “We’ve heard you,” Kelly said of the decision to ditch the usual DLC structure.

There’s been some debate about whether 2019’s Modern Warfare is a high-tech remake of the 2007 title or something entirely new, and the truth is that it’s a little bit of both. Smith remarked that the challenge the developers were faced with was making Call of Duty feel fresh again while keeping its DNA intact. As a result, for Modern Warfare 2019, everything has been stripped down and rebuilt.

You can see this fresh start in Modern Warfare’s multiplayer modes, particularly the entirely new two-on-two Gunfight mode. It was definitely my favorite mode of the day. Gunfight is quick and intense; you may only get one chance to win. If you get killed right away, you’re out for the round, and your teammate is left on their own to eliminate the opposing two players. At first, this was intimidating, but after a few matches I found myself thinking about the Gunfight maps in entirely new ways: Where were my enemies likely to hide? And how could I outsmart them in order to get the first shot?

“Those maps represent a very visceral, design-focused experience,” Infinity Ward’s Joel Emslie told Polygon in an interview. Because Gunfight uses random, predetermined loadouts for each round, players are able to “experience a fully leveled-up game in this tight compressed space,” he said. It’s also a good place to cut your teeth, since you’ll get to try out a slew of different weapon combos, and it’s easy to jump in and out without much fuss. 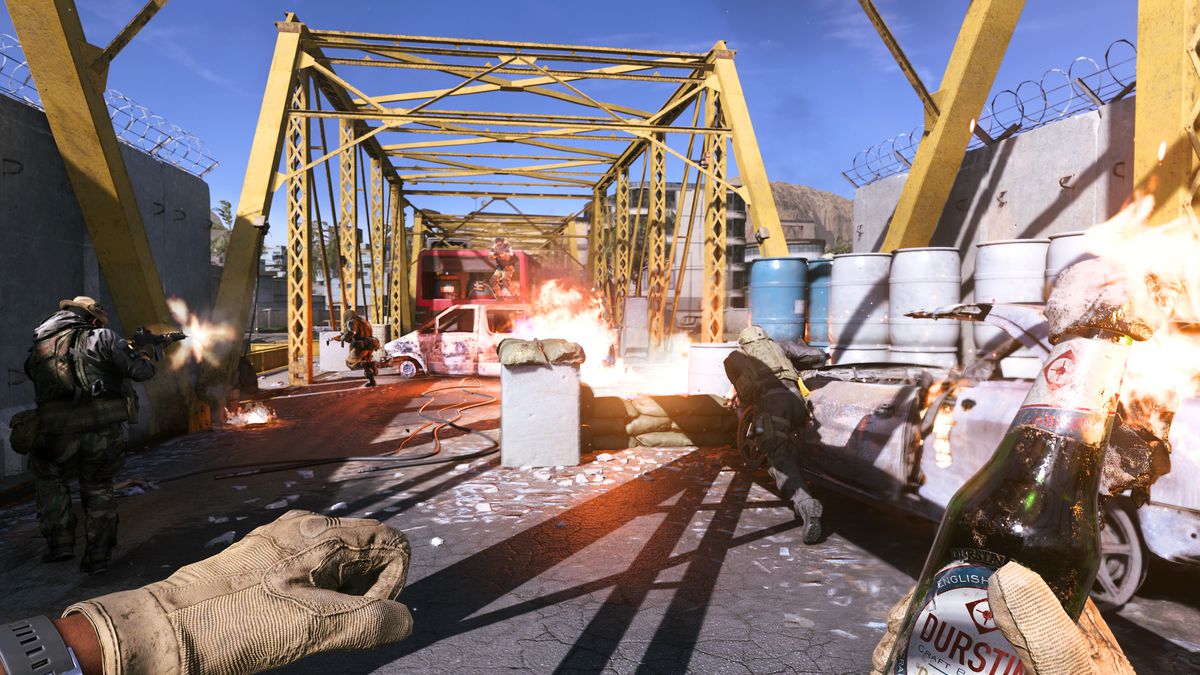 Emslie, Modern Warfare’s art director, recently returned to Infinity Ward after a long absence. He played key roles on several games in the series, starting with Call of Duty 2 and ending with Modern Warfare 2, and he even created the fan-favorite character Captain Price. He said that when he heard Infinity Ward was rebooting the Modern Warfare subseries, he had to come back.

“It’s like going home again,” said audio director Stephen Miller. Like Emslie, Miller is a Call of Duty vet, having worked on the franchise for 13 years. “Modern Warfare is the heart of Call of Duty for me,” he said. “I absolutely love it.”

“We have so much more horsepower and memory than we used to have,” Miller explained. For example, 2007’s Modern Warfare had no reverb engine, while 2019’s version has four. Bullets echo in the distance as they continue moving beyond your immediate point of view. Penetrating an enemy’s cover makes a different sound than simply shooting someone outright. You might hear creaking footsteps as players move from one room to the next, the sound of a door slamming open behind you, or the babbling of a creek in the background. These little audio cues may be easy to miss for the average players, but audiophiles will be able to tell, and skilled players can use the sounds around them to hunt down their foes.

“I cry inside when I see people playing the game with no headphones on,” Emslie joked, emphasizing how important audio design is to the overall Modern Warfare experience. 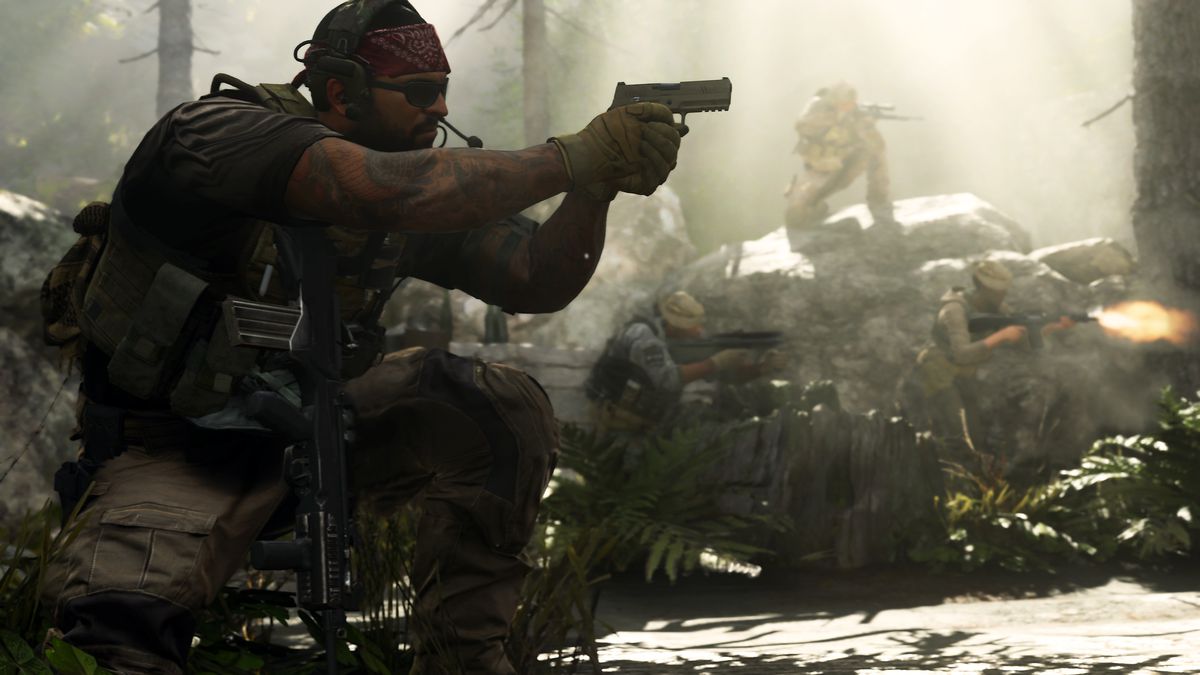 While there’s been much discussion about the reboot’s “morally gray” campaign, we only got hands-on time with a few hours of multiplayer at the event. It’s honestly a bit unsettling to hear about all of these realistic details at a time when mass shootings are disturbingly frequent, but playing with others kept me disconnected from that aspect of Modern Warfare’s realism.

Once I had a PS4 controller in my hands, I started experimenting with different loadouts. You can save up to five, each with a different combination of weapons, mods, and perks. Primary weapons generally have between 30 and 60 modifications, so you can customize to your preferences.

While organizing loadouts, you can also choose your killstreak bonuses, both when they happen and the reward itself. That’s right, killstreaks are back — the developers want players to care about staying alive, particularly in longer rounds with high player counts.

How high? The biggest match we played this week was 10-versus-10 team deathmatch, but according to Emslie, the player count in the finished game will go much higher than that. “We’re going past a hundred players,” he told Polygon. He also mentioned 32-on-32 matches, saying that what we played on Tuesday was “just the tip of the iceberg.”

If Gunfight was my favorite mode of the day, my least favorite was a six-on-six exercise in which teams are tasked with capturing and keeping a bomb away from opponents. Teammates can revive each other, which is an interesting multiplayer aspect for a series that typically relies on automatic respawns, but this resulted in enemies camping out near corpses and shooting down would-be saviors. Ultimately, it became more about that than the actual gameplay objective. The size of the match wasn’t a problem, though; a capture-the-flag-type objective with the same player count was a lot more fun. 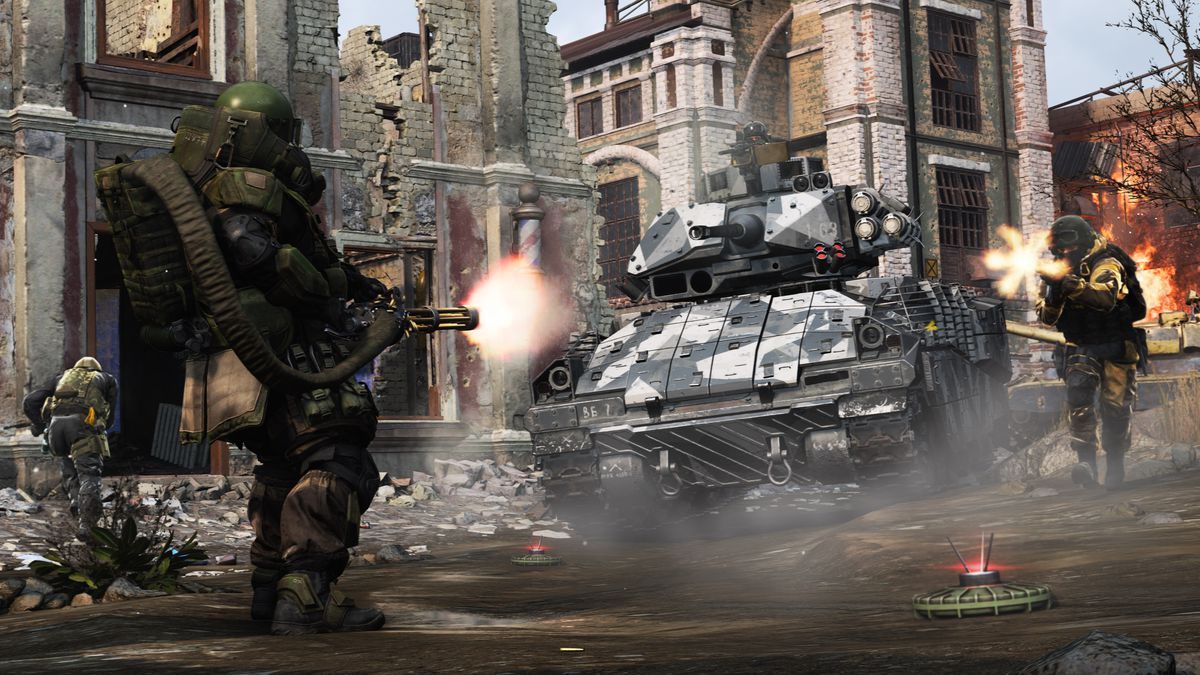 The larger team deathmatch was a good opportunity to explore more of the multiplayer maps. As Smith said during the presentation, Modern Warfare’s multiplayer was designed with exploration, “climbability,” and traversal in mind. There are different ways to get to any given waypoint, and the bigger the map, the more strategic positions there are just waiting to be found.

As a perpetual bullet sponge, I was pleased when Emslie said Modern Warfare would accommodate “all play styles,” whether you like to run-and-gun or hole up and snipe foes at range. Even campers, or “positional players,” as he jokingly called them, can find places to call their own on Call of Duty: Modern Warfare’s new maps.

The ultimate goal is to add depth and replayability to every firefight, but a couple of hours of hands-on time isn’t enough to fully evaluate Call of Duty: Modern Warfare’s long-term potential. From what we can tell, though, the multiplayer experience does achieve some of its other goals, such as allowing for different play styles and challenging players’ way of thinking about the franchise. This is most apparent in Gunfight, but you can see it in larger matches too; the level design really makes you think about where you’re going to go and what you’re going to do when you get there. As for its “depth and replayability,” you can decide that for yourself when Call of Duty: Modern Warfare launches on Oct. 25.