It’s hard to describe Death Stranding. It’s easy to describe what you do while playing it, though: You, Sam Porter Bridges, are a porter who builds literal and metaphorical bridges for the Bridges organization. It’s not subtle.

Everything you do in Death Stranding revolves around being a porter, delivering cargo, and helping others. And the whole time, you’ll be rebuilding infrastructure like footpaths and paved roads while making your deliveries and reconnecting the world.

Also, you’ll be fighting ghosts and terrorists, but that’s oddly tangential and we’ll get into it below.

We’ve put hundreds of combined hours into the game, so let’s talk about what we’ve learned and offer you some advice about your first few (dozen) hours.

You’re a porter. This is as true in the first 10 minutes as it is 80 hours later. 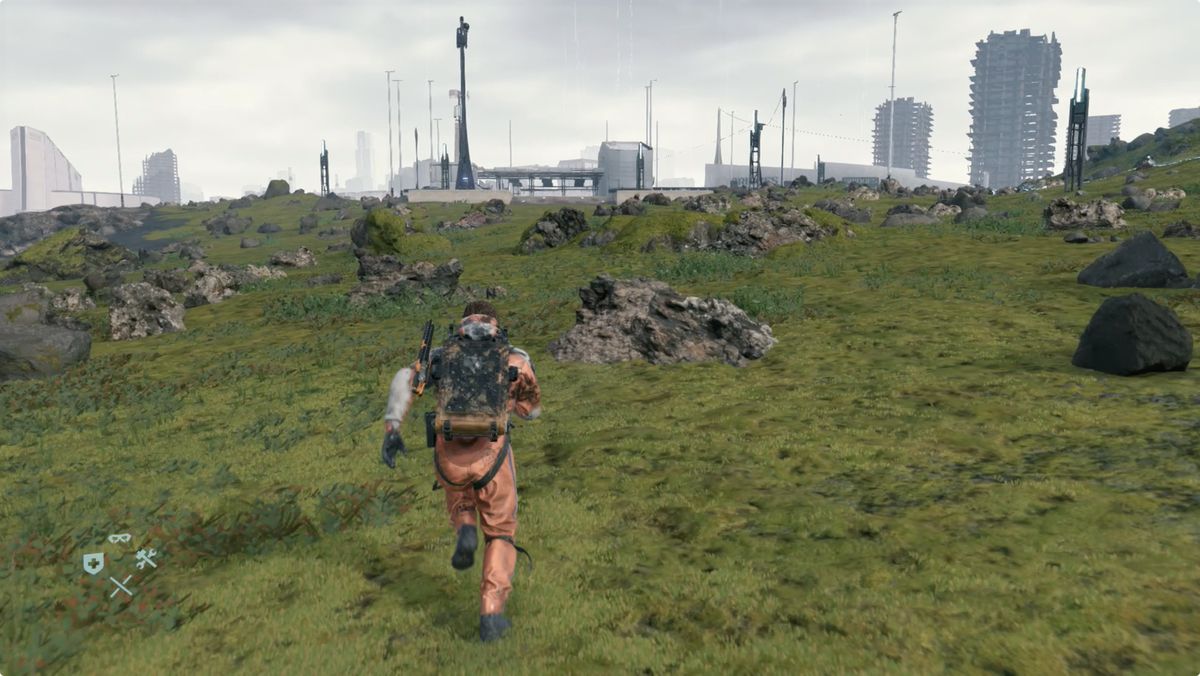 Death Stranding is not an action-packed game. It’s about solitude and reconnection. You’re meant to walk alone in the quiet landscapes for long stretches. Don’t fight that. By all means, be efficient. Carve your own path. But also take your time and enjoy the trip.

Trust in other players

Director Hideo Kojima calls Death Stranding a “strand game.” It’s a weird and high-concept description that means you’ll never play side by side with another player, but anyone who plays Death Stranding online has a chance to impact your game.

Death Stranding is a single-player game where other players’ stuff occasionally shows up in your world (and vice versa). You’ll find other Sam’s ladders, climbing anchors, and bridges in your game. These items are the strands in Kojima’s strand game, and you can click the touchpad to give players likes for their help. 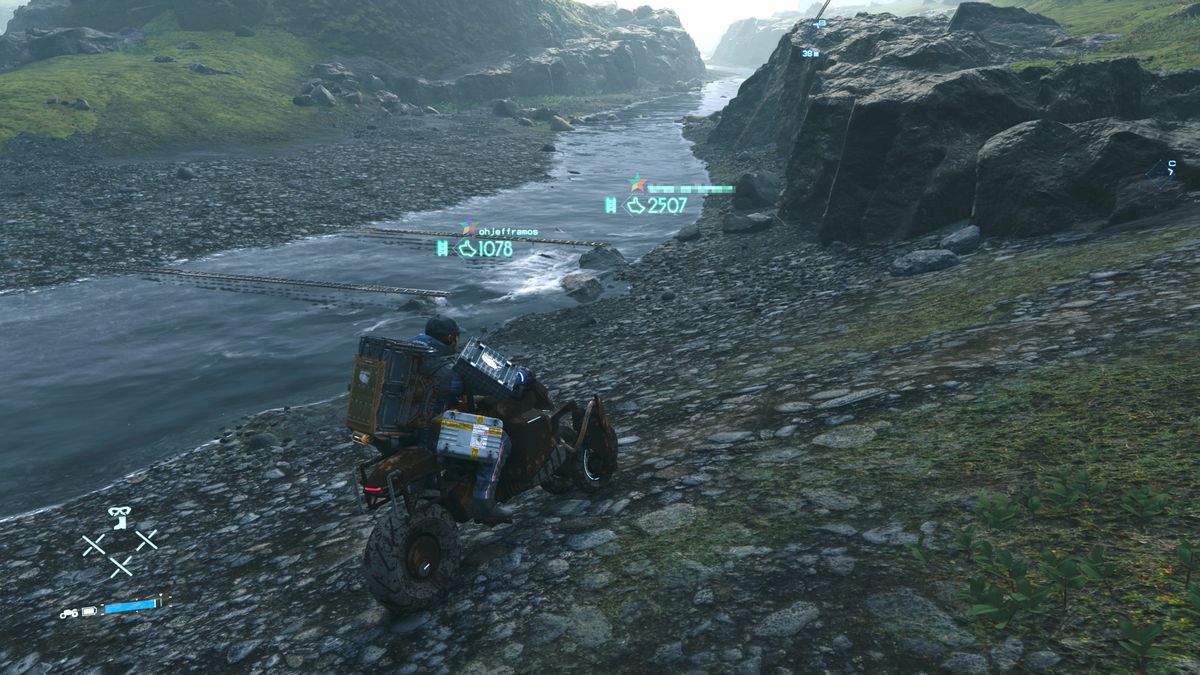 Even though there’s no multiplayer, Death Stranding is cooperative game. You’ll constantly rely on the random appearance of other players’ (green-tinted) structures. You’re working together, even when you don’t realize it. As multiple Sams follow the same path across the terrain, for example, a footpath appears on the ground that removes rocks and makes travel easier.

Trust other players. If you see a footpath, that almost certainly means that it’s safe and reliable. If there’s a bridge across a river, it’s probably the smartest place to cross. Assume that others cooperated to make it so.

That trust goes both ways. If you need a ladder to climb a cliff, there’s a good chance someone else will, too. Place it, and help your fellow Sams. Oddly, in this single-player game, we’re all in it together.

Sam can only carry so much cargo at one time before he starts to struggle and fall over. Keeping Sam’s weight — part cargo, part gear — under control is a challenge throughout the game. 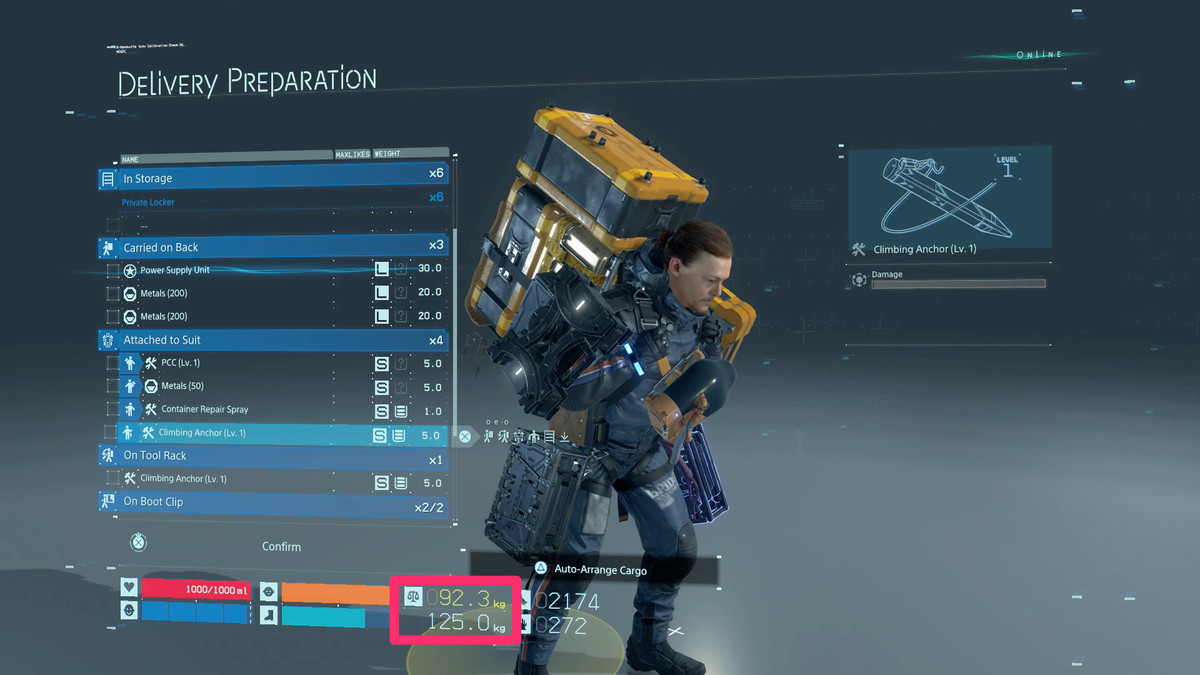 Keep your weight in the blue to keep Sam’s stamina and balance up.
Kojima Productions/Sony Interactive Entertainment via Polygon

Keep this number in the blue.

When you’re making multiple deliveries (or one really big delivery), your instinct might be (like ours was) to make one overburdened trip to get it over. But this isn’t bringing in groceries from the car. If we had to play again from the beginning, we’d make more multiple, manageable trips.

And this is where trusting other players and taking your time (our first two pieces of advice) come back in. You don’t have to carry every single thing you might need. Instead, trust that other players and their structures will be there to help you. You’re not here to make the fastest delivery on record or to rebuild the world alone. It’s a game about walking and connecting, so make two trips and enjoy the scenery.

Fighting isn’t important, except when it is

Death Stranding isn’t a shoot ‘em up action game, and there are spoilery story reasons why killing anyone is a bad idea. But there is combat in Death Stranding.

Cargo-obsessed MULEs, terrorists, and ghost-like BTs lurk throughout the world. You’ll mostly be avoiding them, but eventually you’re going to end up in combat.

What’s important to remember here is that you’re a porter first, and a fighter (a distant) second. Especially when you’re in your first several hours, don’t pick fights, and make sure you’re prepared with the right equipment if you have to fight.

Worry about getting your cargo to its destination, and save the fighting for later.