Death Stranding is a stark, post-apocalypse of muted tones carefully arranged around a naturally understated palette. In the midst of all this mournful loveliness, there sits an anomaly: garishly designed cans of a 21st century drink called Monster Energy.

This is a caffeine-spiked energy drink manufactured since 2002 by Monster Beverage, a marketing-led company with a somewhat unsavory history of trademark bullying and employee sexual harassment. The company’s main target audience is young men.

In Death Stranding, tins of neon-green Monster Energy are always available at the center of protagonist Sam’s restroom, where he spends time recovering from missions, checking messages and listening to lengthy exposition speeches from other characters.

He can grab a can at any time and have a good slurp. In an early mission, he’s actually required to gulp down a can and does a little vitality dance when he’s done. While he’s on the road, his water canister is filled with the drink, which serves as a useful stamina boost. When the can is replenished with water, it somehow turns itself into Monster Energy. 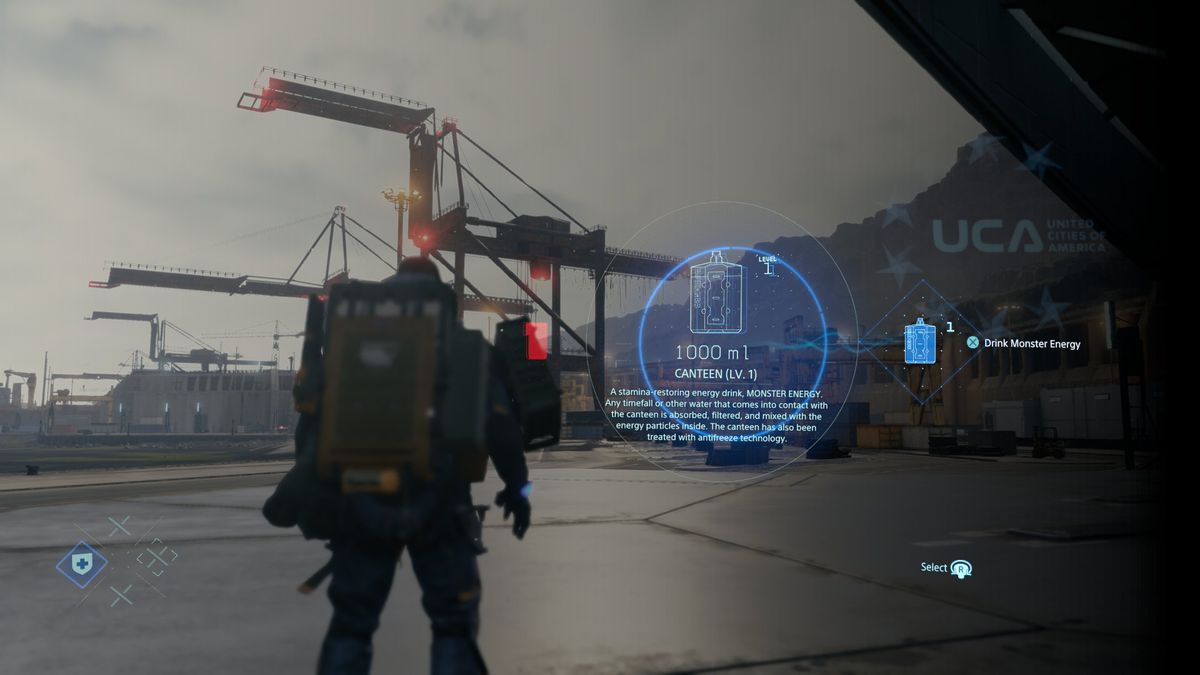 This is product placement at its most sensational and incoherent. Although other brands appear in the game, such as J.F. Rey sunglasses and Acronym clothing, they sit at the margins. Their colors and styles are appropriate to the world. By contrast, the drinks seem outrageously inappropriate, almost to the point of parody.

Death Stranding is a sparsely populated world where branded products are almost non-existent. It is a place of scarcity and need. But if you want to guzzle a branded energy drink, it’s as free as air. So far as I can tell, the game’s story offers no explanation for the presence of one brand of pre-apocalypse, perfectly preserved consumer products.

I contacted Sony and Monster Beverage to ask about the terms of the deal, but only received replies that they’d look into into it. Nothing came back. As best I can tell, this was an arrangement undertaken in Japan. At Tokyo Game Show in September, Monster Energy hosted a large, garish booth where Death Stranding was showcased. Co-branded goodies like t-shirts were given away as contest prizes. In the past, Monster Energy has allied itself at TGS with big game brands like Assassin’s Creed and Call of Duty. 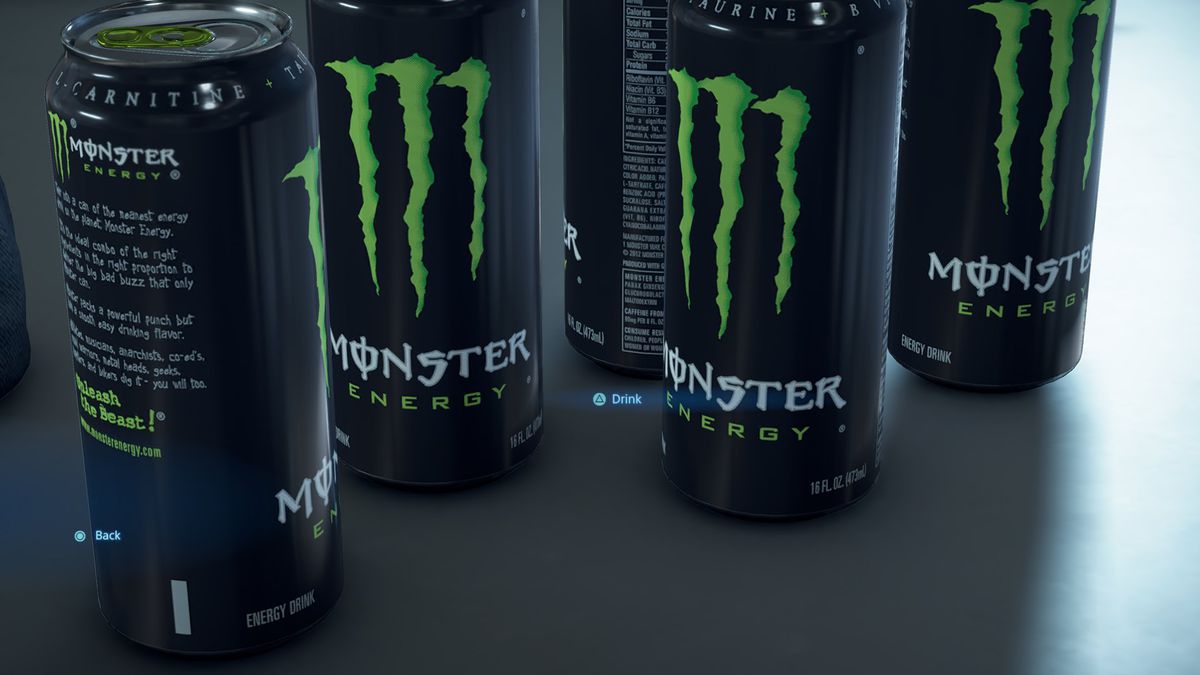 With its ever-present triple-claw branding, Monster Energy, is is not some culturally niche product. Monster Beverage has a market capitalization value of around $30 billion. In 2018, the company reported annual revenues of $3.8 billion.

The company is also no stranger to controversy. In 2018, Huffington Post posted a story about how five women were suing Monster Beverage for sexual harassment by senior executives. In the face of calls for a boycott, one of the accused execs, John Kenneally resigned soon after the report. Another, Brent Hamilton, was fired by the company earlier this year. He is still awaiting trial for allegedly strangling a former girlfriend, who worked as a contractor for Monster Beverages. Another manager named in the lawsuit, Phillip Deitrich, is still at the company, according to his LinkedIn profile.

Monster Beverage is notoriously litigious regarding its trademarks. In the last decade, it has filed multiple cease-and-desist orders and lawsuits against small companies that use the word “monster” in their own branding. These include companies that sell books, cakes, trucks, and even aquariums.

In 2017, the company sued a small soda company called Thunder Beast, which makes root beer. Its lawsuit argued that the word “beast” infringed on its own slogan. (As seen on the cans in Death Stranding, Monster uses the slogan “Unleash the Beast.”). Thunder Beast founder Stephen Norberg told The Washingtonian: “I did some research and found out [Monster] is a corporate bully when it comes to small businesses and trademarks, so I hired an attorney who had dealt with them before. For a long time we did this dance where they would suggest fairly ridiculous terms. For example, they wanted me to agree that we would never use the color green again in any capacity.” The legal battle remains unresolved.

Monster Beverage has also faced negative publicity surrounding lawsuits about the health risks associated with heavily caffeinated drinks. Litigants claimed the drinks were responsible for “heart attacks, stroke, and renal failure.” Many of the suits were dropped or beaten in court, but media scrutiny on energy drinks has intensified.

Polygon contacted Sony Interactive Entertainment to ask about its choice of sponsorship partner, but had not received a reply at press time. 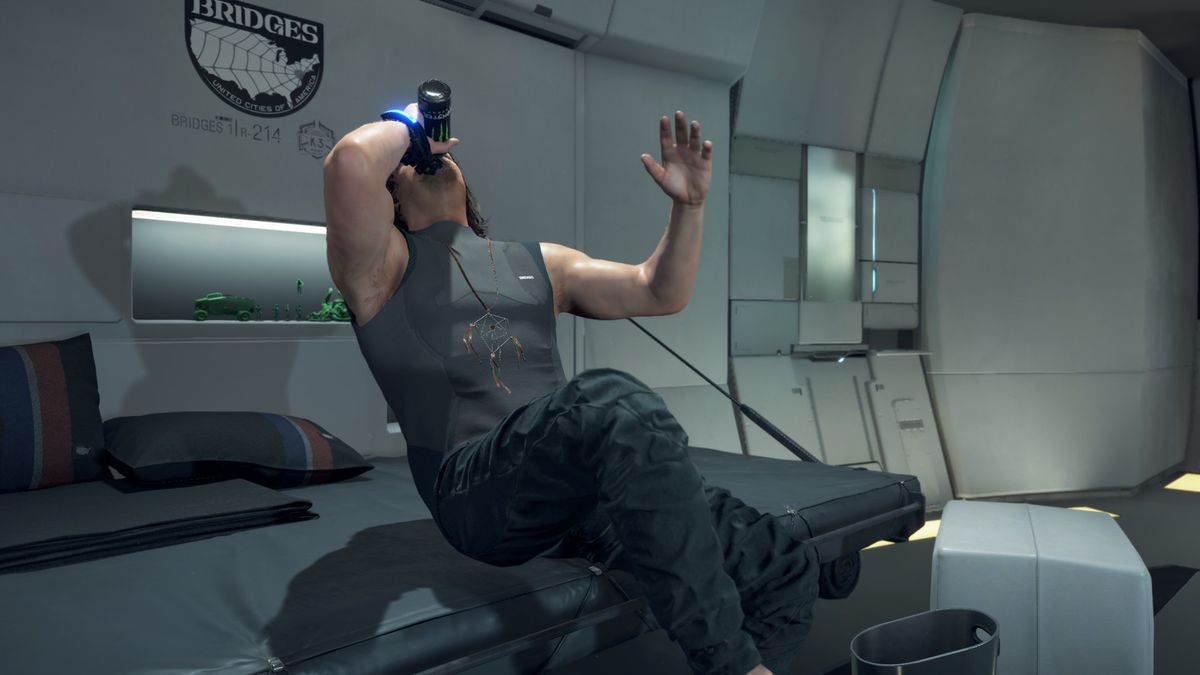 Monster is a prolific promoter, a la Red Bull. In 2018, the company spent $354 million on advertising and promotions, according to its most recent financial report. It is a leading brand in the sponsorship of esports teams, NASCAR, music events, and extreme sports. World Formula One racing champion Lewis Hamilton is sponsored by Monster. So are some of the world’s leading mixed martial arts fighters and professional bullriders.

For Monster Beverage, the Death Stranding sponsorship deal looks like a good fit. This is a brand that oozes action machismo, a hallmark of the game’s creator Hideo Kojima, whose previous creations include the Metal Gear Solid series. Death Stranding protagonist Sam is a gruff, no-nonsense fighter who scorns authority but suffers deprivation as he helps others and tries to rescue the love of his life.

Despite Kojima’s heavy reliance on macho archetypes, he has earned a reputation as a manipulator of public opinion and as a crafty purveyor of hidden messages. Kojima is well-known as a cultural magpie, stuffing his games with artifacts that obsess him. Such is his enigma, that some will see this sponsorship deal as a fan tribute or cultural meta-joke.

Even so, the partnership with Monster Energy looks like a grotesque commercial imposition on an otherwise beautifully crafted game, seemingly motivated more by profit than by aesthetic considerations.