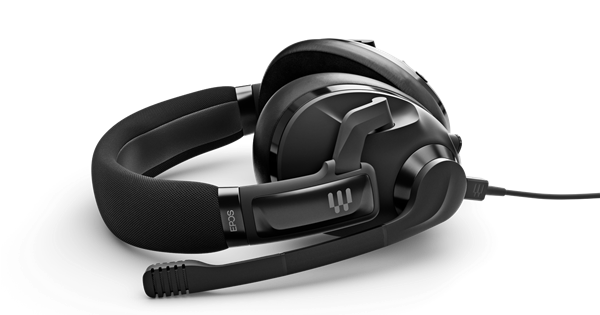 This is about the most versatile gaming headset on the market right now at this price point.

The Epos H3 Hybrid aims to allow you maximum connectivity to consoles, PCs and handheld devices while gaming and it also offers itself up as a decent music headset for that on-the-go commute.

Let’s start with the basics.

You can connect the Hybrid to pretty much any gaming machine out there right now.

So for PS5 it is a matter of jacking the headset into the DualSense controller with the rugged minijack cable that comes in the box, same for the Xbox Series X/S. For Nintendo’s Switch it’s straight into the console itself and so on.

But the earphones also boast Bluetooth support, so you can down the joypad and connect up wirelessly for a trip out with your iPhone/Android music streaming services.

It all works pretty seamlessly and with a 37 hour battery life you’ll have plenty of charge when out and about.

The device itself is lightweight and slick. A dark matte black it looks like a costly gaming headset with all the fancy curves in the right places, although I’m not a massive fan of the back-slanting earcup design.

And while it’s clearly built for comfort, it didn’t quite fit the head as perfectly as rival headsets like my usual go-to, HyperX’s Cloud II wireless.

One other criticism is the headband across the top of the device. The padding thins in the middle but after a long gaming session on the PS5 I found that very top part of my head slightly sore from the hard plastic beneath.

I would recommend to the maker they thicken up this area in any redesign as it would add greater comfort for those super long computer sessions.

As the cups don’t quite perfectly fit on the head, you do get a fair bit of noise bleed at higher volume levels. This can annoy others in the room.

That bleed, also means the excellent sound quality in this headset doesn’t always make it’s way perfectly to the ears themselves.

I found pushing the headset to my ears, removing any bleed produced a noticably better overall sound that just letting them sit naturally as the design intended.

The bass notes were more pronounced, and the overall immersion felt spot-on.

Of course you can’t game and hold the earphones to your head, so when playing I didn’t get quite that same level of perfection in the cans, although it was still very good overall.

Gunshots pop brightly in games like Call of Duty, while cars rev like a real-life race track as you pound the gravel in titles like Forza Horizon and voice acting is pin-sharp in more talky games like Ghost of Tsushima: Director’s Cut.

When connected to a PC through USB, players can download the Epos Gaming Suite to unlock 7.1 surround sound and tailor audio and microphone preferences, so that does help to mitigate the out-of-the-box bleed issue somewhat and give you a bassier tone if, like me, you felt it lacking.

The mic, which can be switched off at any point simply by lifting it upwards, sits nicely in front of your mouth and is very clear during in-game chat.

It’s better than most I’ve tried over the years so kudos to Epos for that, they get a rare bass into the mic sound where all to often most gaming headsets are far too tinny.

It’s also worth noting gamers can easily detach and reattach the microphone with a magnetic connection in the boom arm. When the boom arm is removed, a supplied cover plate protects the connectors and keeps the H3 Hybrid’s sleek, seamless look.

Of course one of the key gimmicks of this H3 Hybrid is the ability to not only get in-game sound through your wired connection but also mix it with Bluetooth audio at the same time.

As a result hardcore gamers can connect and chat with pals on third-party apps and services like Discord while also bashing away at the PS5 buttons.

And the same goes for music. So you’re no longer tied to listening to Spotify through the PS5, I had a rock playlist from Amazon Music streaming through my phone while headshotting rivals on CoD: Cold War multiplayer.

It’s a bit of a game changer and gives the gamer so much more freedom with overall sound options, which can only be a good thing.

In a clever move, the H3 Hybrid includes a secondary microphone in the ear cup that allows you to pick up phone calls when wearing the headset on-the-go without the main boom arm microphone attached.

One thing to mention is the volume control is a little funny right now. The makers are aware the wheel on the right cup jumps unevenly in volume as you spin it and are working on a fix which will eventually add double the amount of volume steps for a smoother roll up the levels.

Overall, I’ve got to say I really liked the Epos H3 Hybrid headset.

It’s not perfect. They need to look again at the band across the top of the head to improve comfort, and the ear cup design could also do with a nudge to better fit the ears.

But all-in you’ve got a fantastically versatile headset here for any occasion. And that ability to so easily mix different audio sources on pretty much any device really allows you to get the most out of your gaming experience.