Last time we hung out with Franklin Clinton in GTA 5, he had just robbed the Los Santos Union Depository and made off with a cool $40 million. Usually this is the end of a Grand Theft Auto protagonist's story. We rarely get to see what they do with the vast quantities of money they amass as they climb to the top of the criminal ladder. But in The Contract, the latest expansion for GTA Online, we get to see what Franklin gets up to next—and meet one of his new celebrity associates, hip hop legend Dr. Dre.

"It was just the right story for Franklin, I think," says Rob Nelson, head of development and co-studio head at Rockstar North. "But there were a number of other factors involved too. We wanted to work with Dr. Dre, and had been talking about a potential collaboration for a while. But in order to do that properly, we felt we needed to integrate him into our world in a believable way. We also wanted to work with him in the context of getting new music from him, which is a very special thing when it happens."

Rockstar started thinking about ways to bring Dre into the world of Grand Theft Auto that felt natural. They wanted it to be more than just a cameo (like in the Cayo Perico Heist), which led them to come up with the idea of the player running a celebrity fixer business. "We imagined this celebrity solutions agency for people who can't go through normal channels to fix their problems. They have a lot of means, but might have to go outside the law a little to get things done. We thought that would work really well as a GTA Online business."

Rockstar also liked the idea of GTA Online players getting to see their created characters interacting with someone as iconic as Dre. "You've been with this avatar for maybe 8 years," says Nelson. "They're almost an extension of you. So we thought players getting to meet and work with someone with the legendary status of Dr. Dre—something that would only be possible in our medium—would be a really interesting thing to play with. But how do you connect this character who doesn't talk a lot with this icon?"

That's where Franklin comes in, acting as a mediator between your character and Dr. Dre. He's your voice in The Contract. "In the years since the Union Depository heist he's made a few investments, tried a bit of this, and a bit of that, but nothing really landed," says Nelson. "But now he's trying to be a relatively legitimate businessman and live a low key, happy life. He's used the expertise and the knowledge he gained from Michael and Trevor in GTA 5 and applied it to something he considers slightly more legitimate."

Franklin is the face of your business in GTA Online, and gives you an important job: recover Dr. Dre's stolen phone, which contains his first new, unreleased music in years. But rather than just being a plot point, you'll actually get to hear this new music—and even see it being made and mixed in the studio. GTA Online has long been a platform for releasing new music, but this is by far Rockstar's biggest score yet. Dre hasn't released anything new in six years, so getting him to do it through the game is a major deal.

"He had input all the way through the scripting process," says Nelson. "He came in and did performance capture for us. We even built a working replica of his studio on the motion capture stage. We brought in the type of mixing board he favours using and hooked it up live so he could play music on the set. He had his engineer there too, and Anderson .Paak came in, and they just did their thing as they normally would. This makes it feel authentic and relaxed, because he was there actually doing it for real. It was really special. 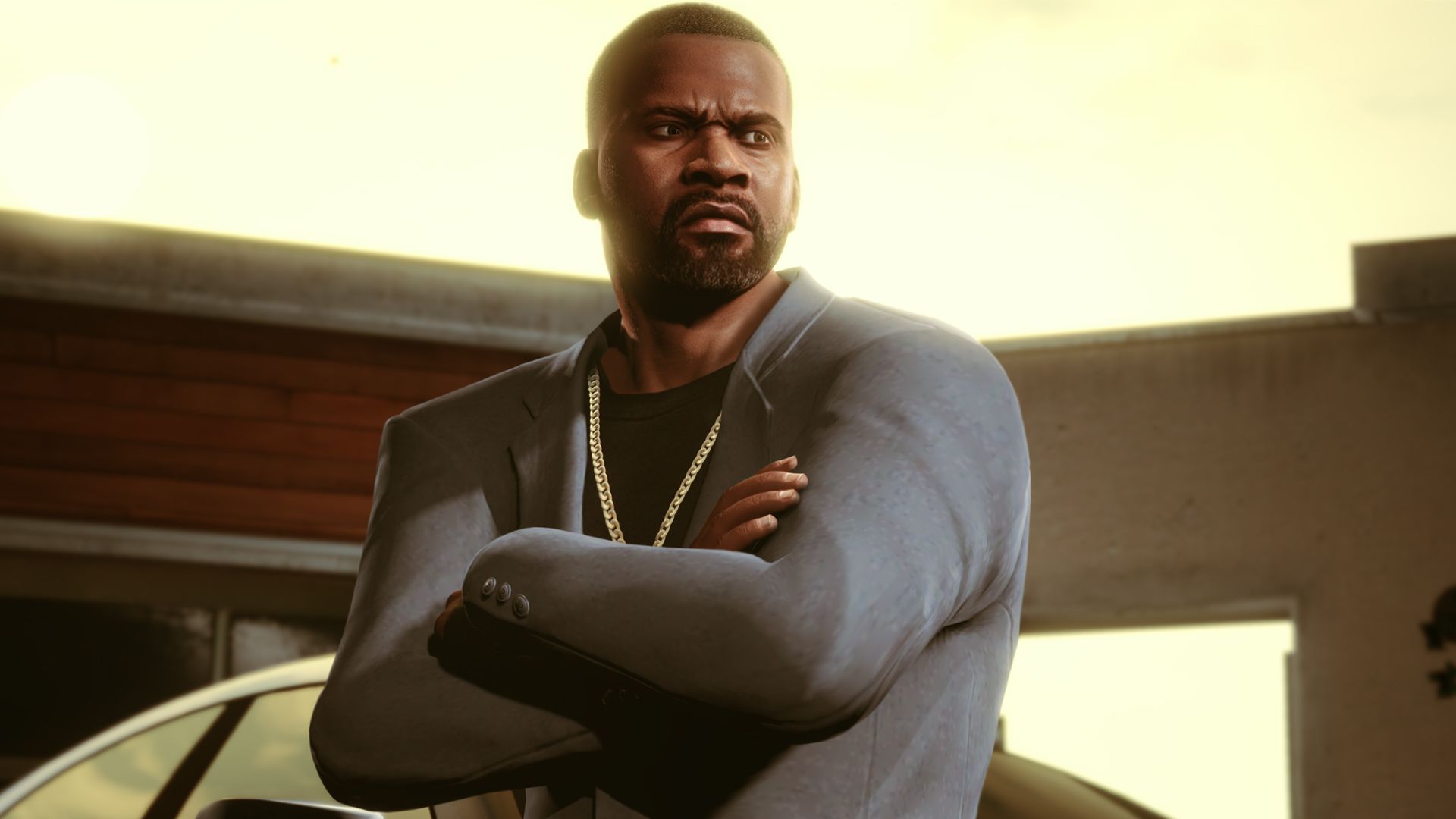 "Dre has always been an innovator, and I think he was excited about the idea. We have unreleased music from this iconic figure, who is known for being very protective of his music, and being very particular about when and how he releases it. He'll only release it when it's ready. That's a story in and of itself. What if he loses this music before he's ready to put it out? What lengths will he go to to get it back? And what if it's you, the player in GTA Online, that has to retrieve it? That sounded like a fun story to experience."

As you play through The Contract's missions, you'll hear these new, previously unheard songs at various points in the story. "As you're retrieving the music, you're hearing different songs in different environments and contexts," says Nelson. "Some might just be snippets, some might be the whole thing, but you're helping Dre pull it all back together. The songs will be available outside of the game in one way or another, but in GTA Online you're experiencing them as part of a story and part of an experience. Dre was really into that idea."

Rockstar worked closely with Dre to figure out which songs worked best in which context. "We'd say we needed this kind of track for this, and this kind of track for that, and he was firing things over to us that he was excited about. Music's always been a huge part of GTA, but that aspect of it has grown a lot over time, just out of our love for it and interest in it—and it'll continue to grow. Adding new tracks to the radio keeps the world feeling fresh. It's something we love to do, and want to keep doing as much of it as we can."

For many GTA fans, the return of Los Santos hustler Franklin Clinton will be just as exciting as getting to hang with Dr. Dre. He looks a little older, a little wiser, with some flecks of grey in his hair and beard. His dog, Chop, is back too. "People seem excited to have him back, hear his voice again, and see him doing well," says Nelson. "I saw a comment where someone said they felt like a proud parent when they saw him in the trailer for The Contract. People get attached to these characters they've spent so much time with." 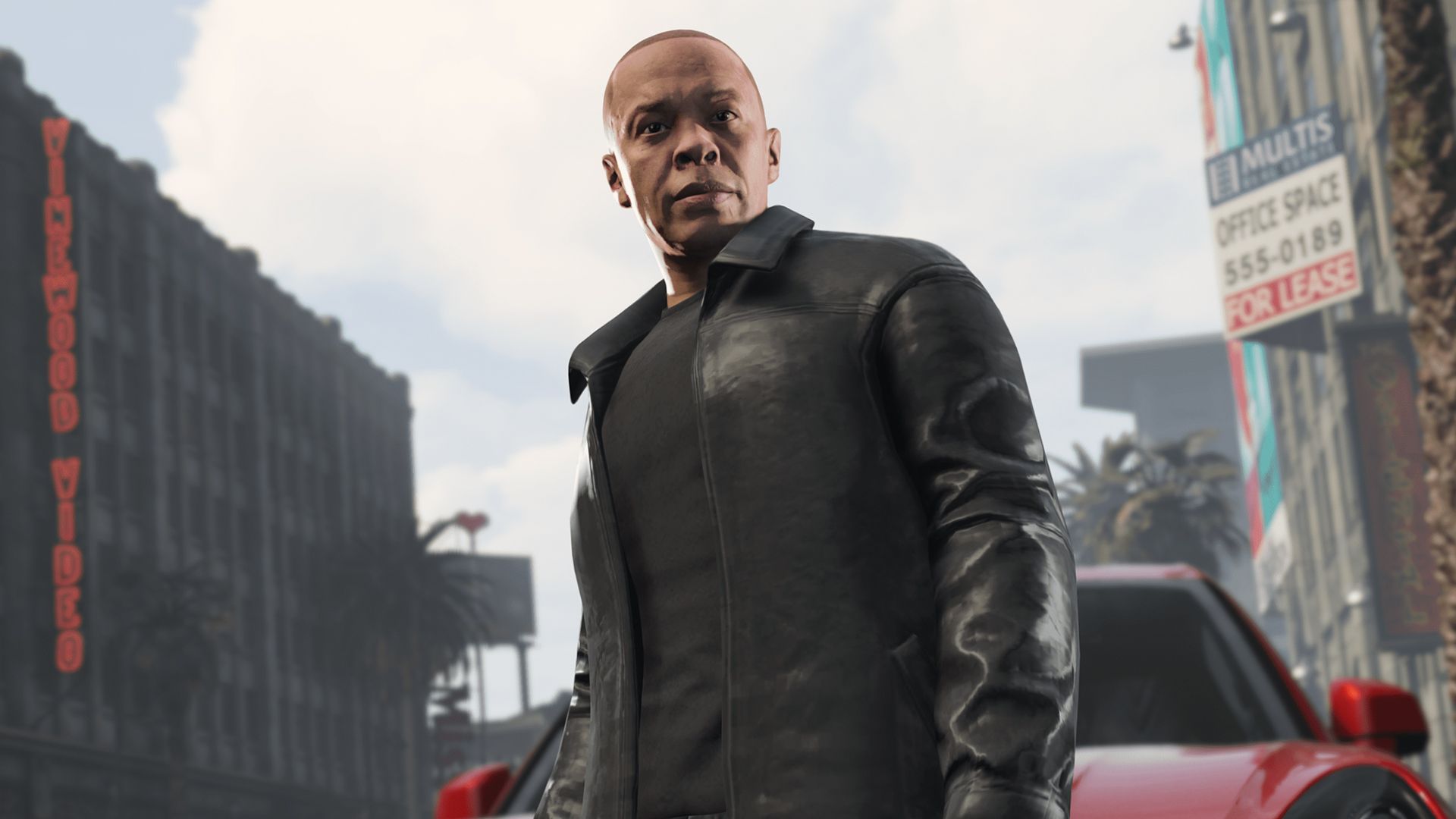 Shawn 'Solo' Fonteno also enjoyed getting back in the studio to play the character again. "I don't wanna speak for him, but I think he was really excited about it," says Nelson. "For us, having him back was a really special moment. It's great seeing Franklin and Lamar back together again, and we have some fun moments for them. We really thought about how we felt about these characters after all this time, and wanted to do right by them and give players a fun new adventure with them. We can't wait to see people's reactions."

In the game, it's DJ Pooh who introduces Franklin to Dr. Dre—a connection that actually has some basis in reality. "Pooh is a long-term collaborator of ours," says Nelson. "He's on the radio in the game, and in real life he's friends with Dre. They go way back. He's also friends with Solo. So it made sense that these guys might have a similar connection in the game as they do in real life. The player in GTA Online already has Franklin's friend Lamar Davis as a business contact too, so it made sense to connect the dots this way."

Working with someone as busy and in demand as Dr. Dre was occasionally challenging, even for a studio as influential as Rockstar. "It involved a lot of back and forths," says Nelson. "We had a number of conversations and meetings with him, and were very into the idea of Dre being properly integrated into the story and not just bolted on. But we didn't know when we'd be able to pull it all together in terms of getting what we needed from him, and scheduling things to work for us and him, so we had to be a little flexible."

True to the satirical, anarchic spirit of GTA, Dre isn't just playing a straight-up, realistic version of himself. "It would be hard for him to do that in a Grand Theft Auto game," says Nelson. "Also, I don't know where the fun would even be in that. Anyone who's in this world is gonna play, and gonna want to play, an exaggerated version of themselves. But with somebody like him who's so well known, and known for so many things, it was fun to play with the character and figure out how that GTA version of him would pan out." 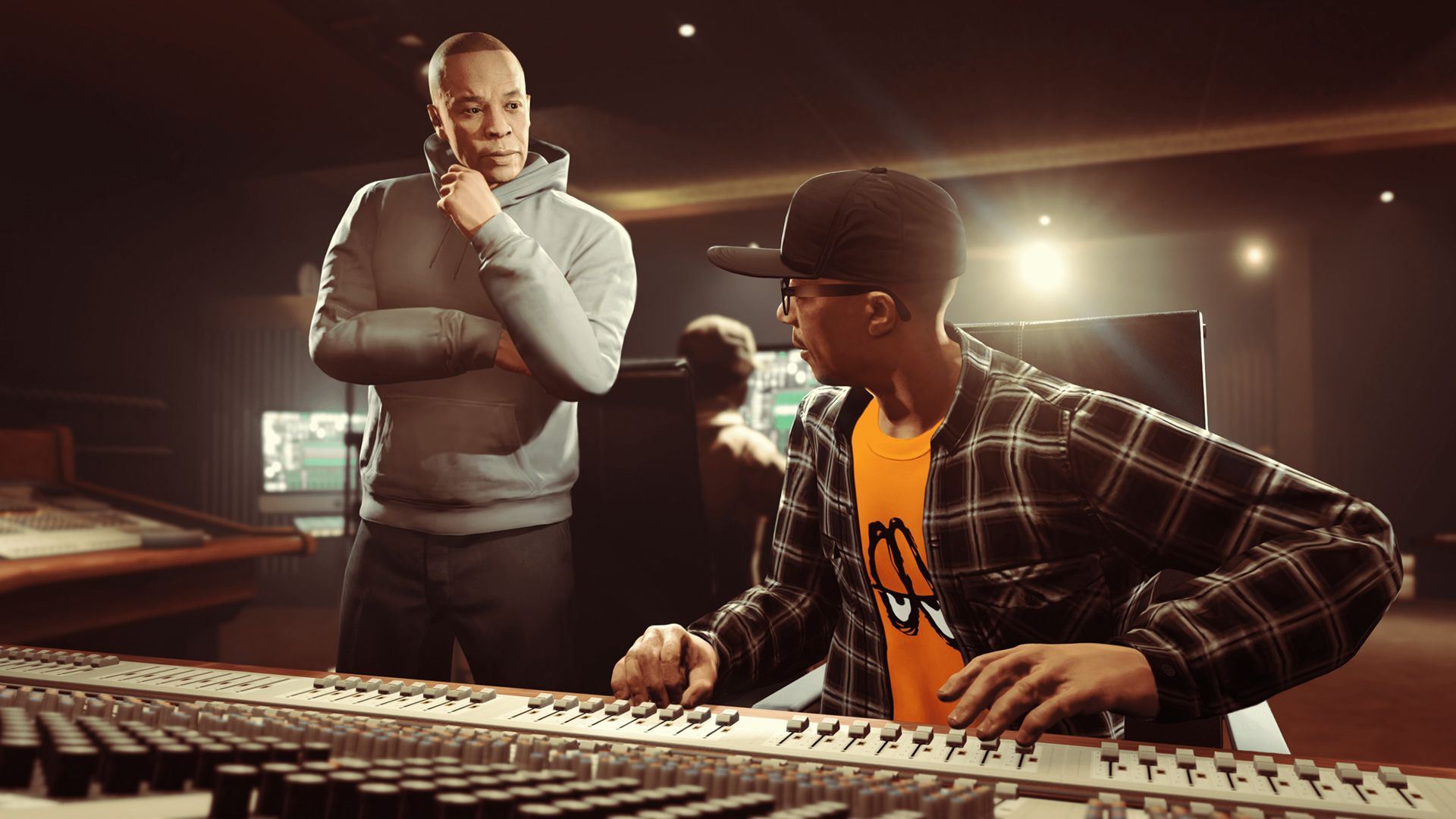 But what about players who want to catch up with Franklin or meet Dr. Dre, but have never played GTA Online? "The game has been going for about eight years and we're trying to streamline things for new or returning players" says Nelson. "There's a lot in there, and we're actively working on making it easier for people to get what they want from it. Also, depending on the content, letting people play some missions on their own. This update has as strong a narrative flow and thrust as anything we've ever done."

Rockstar has been telling stories in GTA 5 for almost a decade, and I wonder if it's getting harder. "It's a challenge," says Nelson. "But it's a good challenge. We used to put out a game then go back underground for years and make a new one. But that's not how this works. It's live and you're constantly adapting. You have a shorter development cycle, which means you have to be creative. This update is a perfect example of that. It started with an idea of wanting to work with a person, then we came up with something around that."