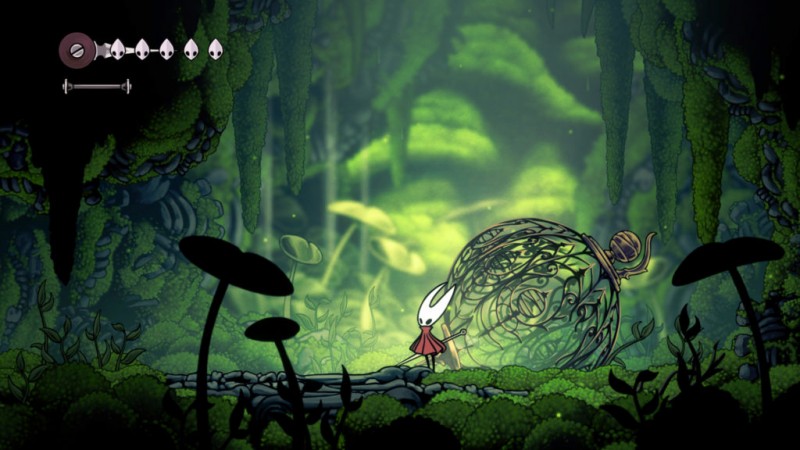 Hidden away at Nintendo’s booth, a few choice stations were hosting a two-level demo of Hollow Knight: Silksong, the highly anticipated sequel project from Team Cherry. I had the chance to play through both levels, and the portion of Hornet’s adventure on display maintains the tradition of excellence established by the original.

An intro early in the demo helps set the stage for the story at hand, but doesn’t necessarily answer all our questions about what is happening in this particular adventure. In the original Hollow Knight, Hornet was a challenging boss and significant character to the unfolding story of Hallownest. As this new game opens, Hornet seems to have been taken prisoner, and while crossing a bridge in her caged conveyance, she bursts forth with webbing, and both she and her captors are flung down into a deep pit. From there, the focus seems to be on finding where she is, and who it was that tried to capture her. 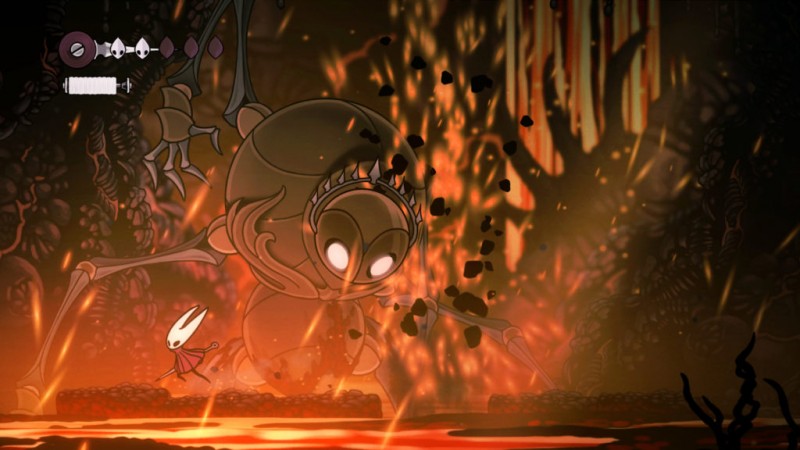 In the first of two levels, the Moss Grotto, I explore a green and verdant leaf-covered level filled with branching climbing sections and the occasional diving bug, who I must dodge and then slash with my needle. One of the first things I notice is that Hornet mantles up onto ledges when she can’t quite make the jump, which can be a real life saver in certain circumstances.

Hornet fills her wheel of silk by attacking enemies, and once it’s full, she can trigger its use with a tap of the button. The heal happens much faster than the long and focused heal that was seen in Hollow Knight, and heals three health units. The speed of that heal changes the dynamic of play in significant ways, especially during boss fights, since it can be relied on to get you back up to fighting form in just a brief moment. The Moss Grotto area ends with a fight against a flying green bug, and I wouldn’t have survived without the availability of the fast heal.

The Deep Docks level shows off a more mechanized section of the strange world into which Hornet has been flung, filled with levers to pull and strange ringing bells that can be struck and sounded. While there, I take a few moments to explore the pause screen, and what it tells about the game. There appear to be at least two major currencies to collect; shell shards act as a crafting currency, while rosaries are a currency for trading. Here you can also see Hornet’s Needle weapon and cloak, and there’s strong reason to suspect that both can be upgraded. 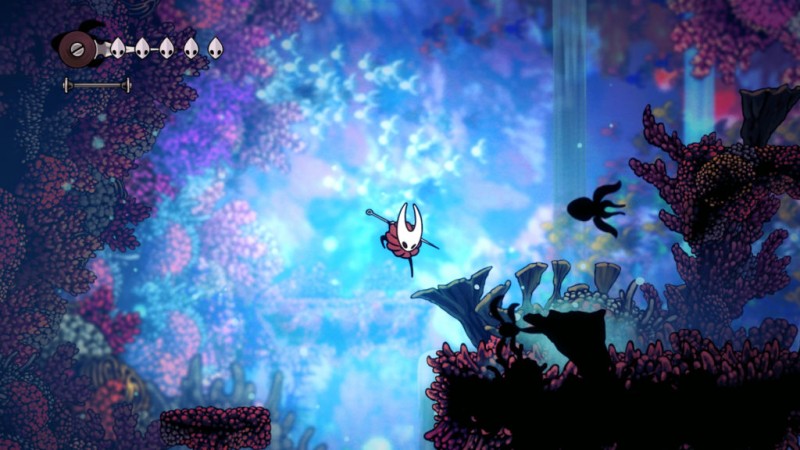 At one point in my exploration of Deep Docks, I encounter a smith bug hard at work, and a conversation unfolds. In an interesting variation from the style of these conversations in the original game, Hornet regularly speaks up during these conversations and we read her dialogue in addition to the NPC’s words. Having two-way conversations like this is nice, and helps to shed some light on the nature of the character you’re playing. Hornet comes across as highly educated but haughty, short-tempered but tersely polite.

The Deep Docks level ends with a challenging boss fight against another agile blade-wielder, and I died more than once, sending me back to my most recent bench. Upon returning to the site of my death, a spool of silk could be slashed, which refilled my healing meter just before getting into the big fight again, which was helpful.

Stepping back from individual moments, Silksong plays like a dream. The same tight action, gorgeous art style, and eerie mystery that defined the first games suffuses this new project. Hornet was one of the most intriguing character from that first game, so it feels like a natural outgrowth that this new game follows her as the new protagonist. I’m also pleased that the game is taking us to a new mysterious underground locale to discover, rather than simply expanding on the original game’s destinations. In short, what I saw of Silksong suggests that players of the original Hollow Knight should be justified in being excited about this follow-up; Team Cherry is offering all the right indications that Silksong should match or exceed the sophisticated depth, storytelling, and challenge of their first game.