There are some unquestionable masterpieces of art that humans have created. The Mona Lisa. The Lighthouse of Alexandria. All Too Well (10 Minute Version) (Taylor’s Version) (From The Vault). For a while, BioShock Infinite was placed on this pedestal. With BioShock back in the news thanks to the auteur leadership style of series creator Ken Levine, we all, as a society, need to reflect on how and why BioShock Infinite was ever worthy of our reverence.

Games are obsessed with the idea of being films, especially at the triple-A level. Even though gaming’s ace in the hole is that we can be far more interactive and involve players in ways even movies like Bandersnatch cannot capture, we desperately want Daddy Film to take us seriously. Never mind that movies have almost a century on us and have reached a technical peak that games, still improving on graphics and photorealism with every generation, have yet to reach.

Related: The Next BioShock Needs To Finally Leave Rapture BehindIt’s why we brag about The Game Awards beating the Oscars, even though we’re well behind the level of maturity to produce a story with the themes of something like Promising Young Woman. Films are fantastic – I have no real issue with games looking to another art form and pulling inspiration from them. The problem is when they all try to be the same film. Always over-the-shoulder third person action spectaculars with bombastic explosions, sad dads, a dark and grimy tone, and a tug on the heartstrings in the third act where our hero has a brief moment of wondering whether killing all those people was worth it, before drying their eyes and going on killing – but for a reason, this time. 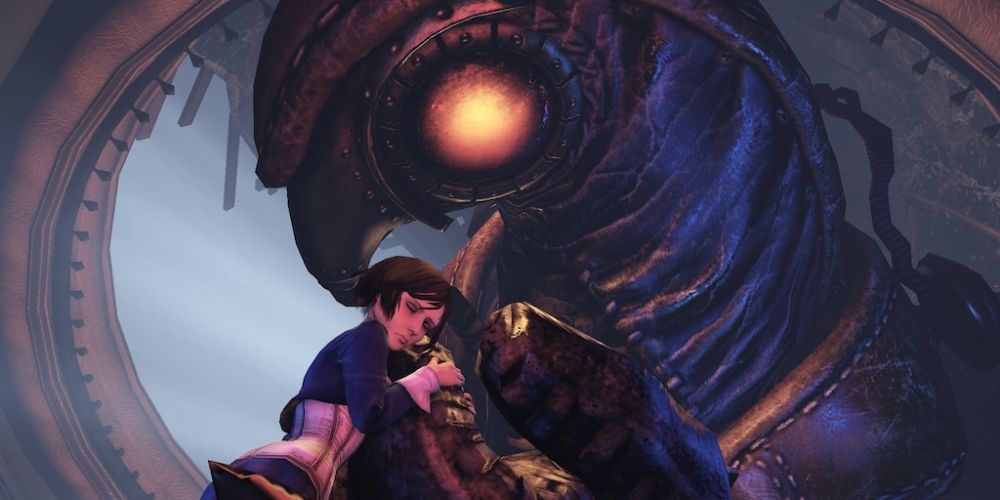 In fairness, the BioShock series does not want to be a film. It, along with The Last of Us and Red Dead Redemption, helped open the floodgates to triple-A games considering themselves art, but it’s far less cinematic. All in all, I’m happy that games are attempting to tackle meaningful themes with considered narratives over just blowing people to bits and grabbing naked women like they did in the days of Duke Nukem. In the canon of video games, I’m glad BioShock, and particularly BioShock Infinite, exists. But it was basically our first try. Why did we all decide it was a masterpiece?

Where a lot of prestige games see themselves as movies, Infinite sees itself as literature. It draws heavily from Ayn Rand, particularly Atlas Shrugged, and has politics to match. It also attempts to hold up a mirror to America’s racist past, but it does so through a very modern lens. Infinite’s attitude towards racism is that some people definitely were racist, but your grandmothers and grandfathers definitely weren’t. Still, several scenes involving Black characters, particularly the interacial couple being pelted with baseballs – itself a clever representation for Americana – lean in harder than you might expect a video game to, especially a decade ago. 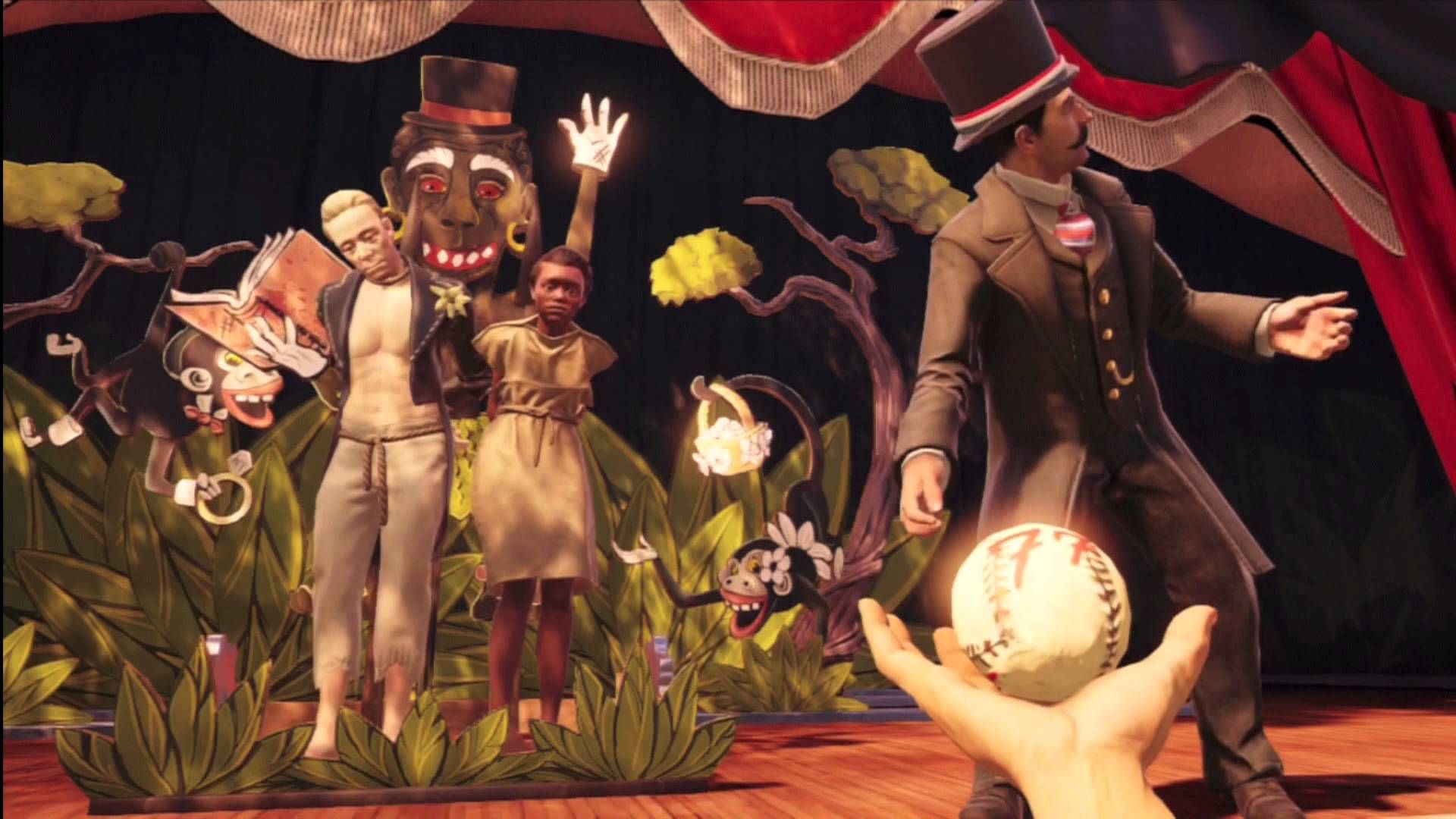 However, there are some huge missteps in this. Yes, the scene confronts the racism Black people have historically been subjected to in America, but having baseballs thrown at you, while a layered visual metaphor, is tame and cartoonish. Worse, racism is gamified, with Infinite inviting you to join in by tossing a baseball yourself. This might be excusable in a game that was prepared to confront you, the 21st century player, for the remaining systemic racism that the era Infinite depicts helped entrench, but it does not. Racism was bad but then it went away.

For every sharp observation – the Black janitor able to eavesdrop because everyone ignores him – there are a dozen times Infinite ducks the issue. Comstock is violently, stereotypically racist, but most of the townsfolk – who, given the era and the regime they gleefully tolerate, were almost certainly racist too – are treated as quaint and jolly citizens going about their lives. It also martyrs Daisy Fitzroy, Black leader of a citizens uprising, in a weak attempt to play both sides. 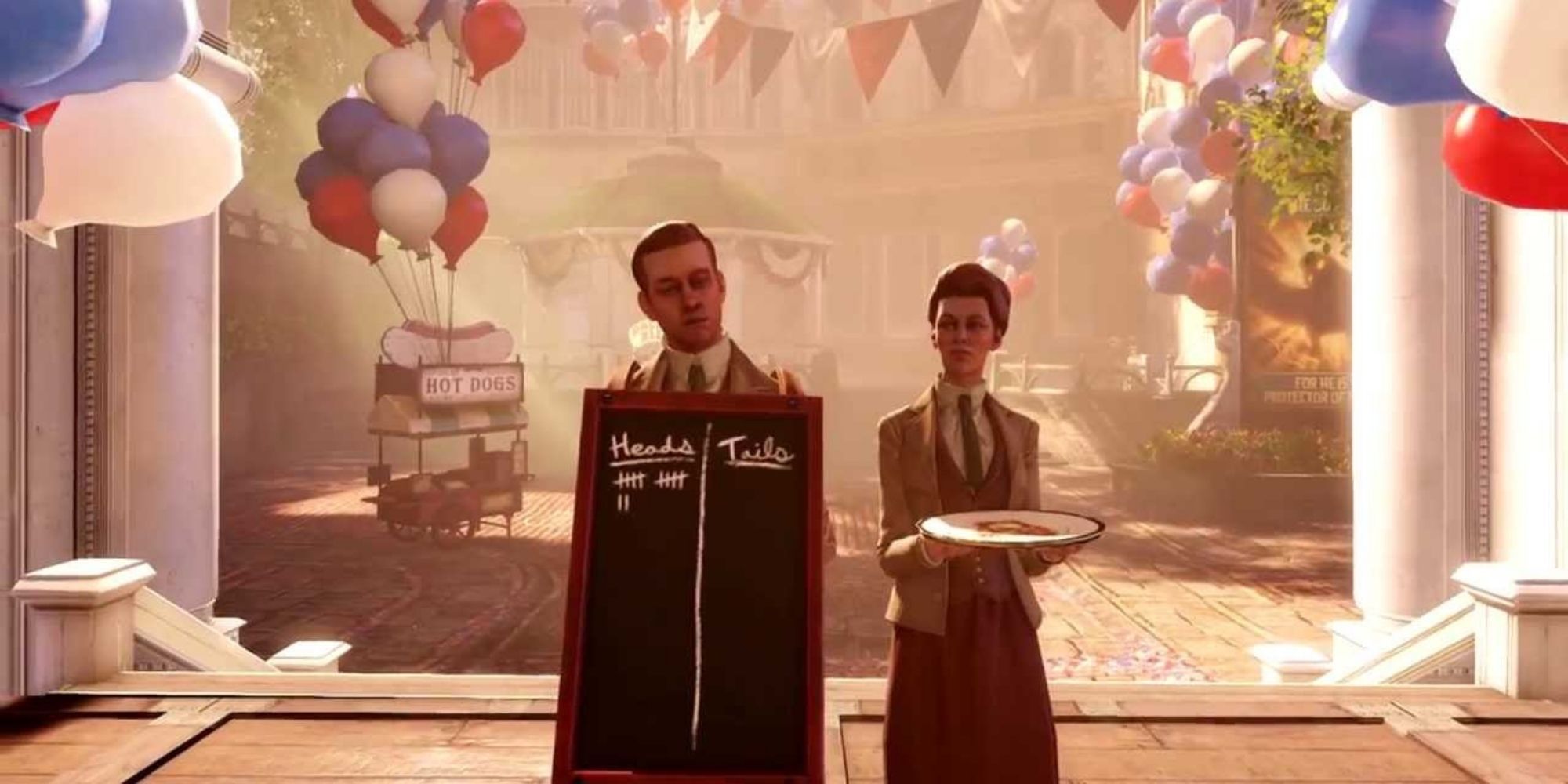 It’s interesting, perhaps even impressive, that BioShock Infinite was able to tackle racism in some form of meaningful way and still be embraced by a gaming community that was bubbling with the impending toxic stench of GamerGate – but it’s also telling. Gamers in 2013 were not ready to confront racism, either historical or current. They still aren’t really ready now. That Infinite could be adored by a crowd so unresponsive to one of its core messages proves how little bite its critique truly has.

BioShock Infinite was fine. It gets a lot of things wrong, but it helped break boundaries and, combined with The Last of Us, might be one of the most influential games in shaping our current landscape. But plenty of games have come along since and made it better. This was one of gaming’s first attempts to be more than a game, and we should have all recognised it as that at the time. An attempt, and ultimately an unsuccessful one.

Gaming still hasn’t peaked now. You can think of a triple-A game that tells a story of the level of our greatest films, or even of literature, to prove me wrong – but I can guarantee they will all be violent, gritty, ‘kill these people in revenge’, pessimistic affairs. You can create great art like that, but if that’s the only great art you can create, maybe you’re not there yet. Get back to me when the triple-A scene finds its Amelie.