Jackbox Party Pack 7 is another fun set of games that will have any group of friends laughing, drawing, and making very inappropriate jokes. The experience this time around is held back by two things: bugs and Covid-19. Yes, I’m sorry, but I had to mention the pandemic. As much as we’re all tired of it, it’s going to keep affecting our gaming even into 2021. In Jackbox 7’s case, we have two games in the pack that really benefit from everyone being in the same room. You can see where the problem lies. 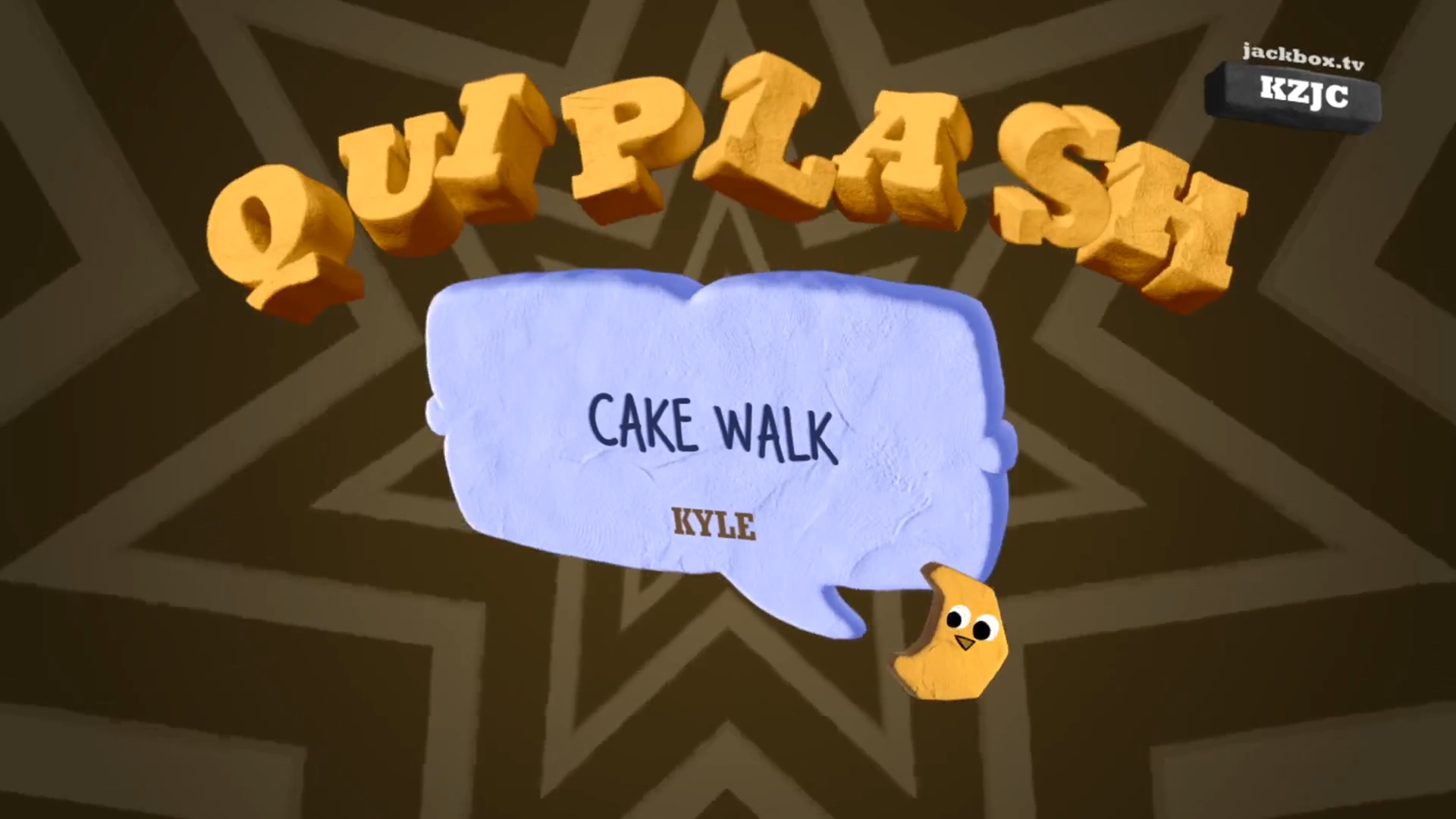 I’m going to take it one game at a time, starting with the safest of the bunch. If you’ve played Jackbox before, you’ve probably played Quiplash. Players are given hypothetical situations, things to name, or other odd prompts. They type a (hopefully) funny response on their phone. When all are done, the game throws two players’ responses to the prompts on the big screen. The other players vote on the funniest, and a winner emerges after three rounds.

Quiplash 3 doesn’t change the formula in any significant way for the first two rounds. One nice little change is that you can now pick your avatar. So if you always wanna be the little yellow guy, your wish is granted. Everything is also presented in a claymation carnival-style, which is odd but fits somehow. The biggest change comes in round three, where new challenges are added for the finale. I won’t spoil them, but they up the ante in an interesting way, even if they do bring Quiplash ever closer to Cards Against Humanity territory. My one big issue is that I’ve had Quiplash 3 crash on my Nintendo Switch. That, combined with issues I had in another, makes it feel like Jackbox 7 isn’t as polished as it should be. 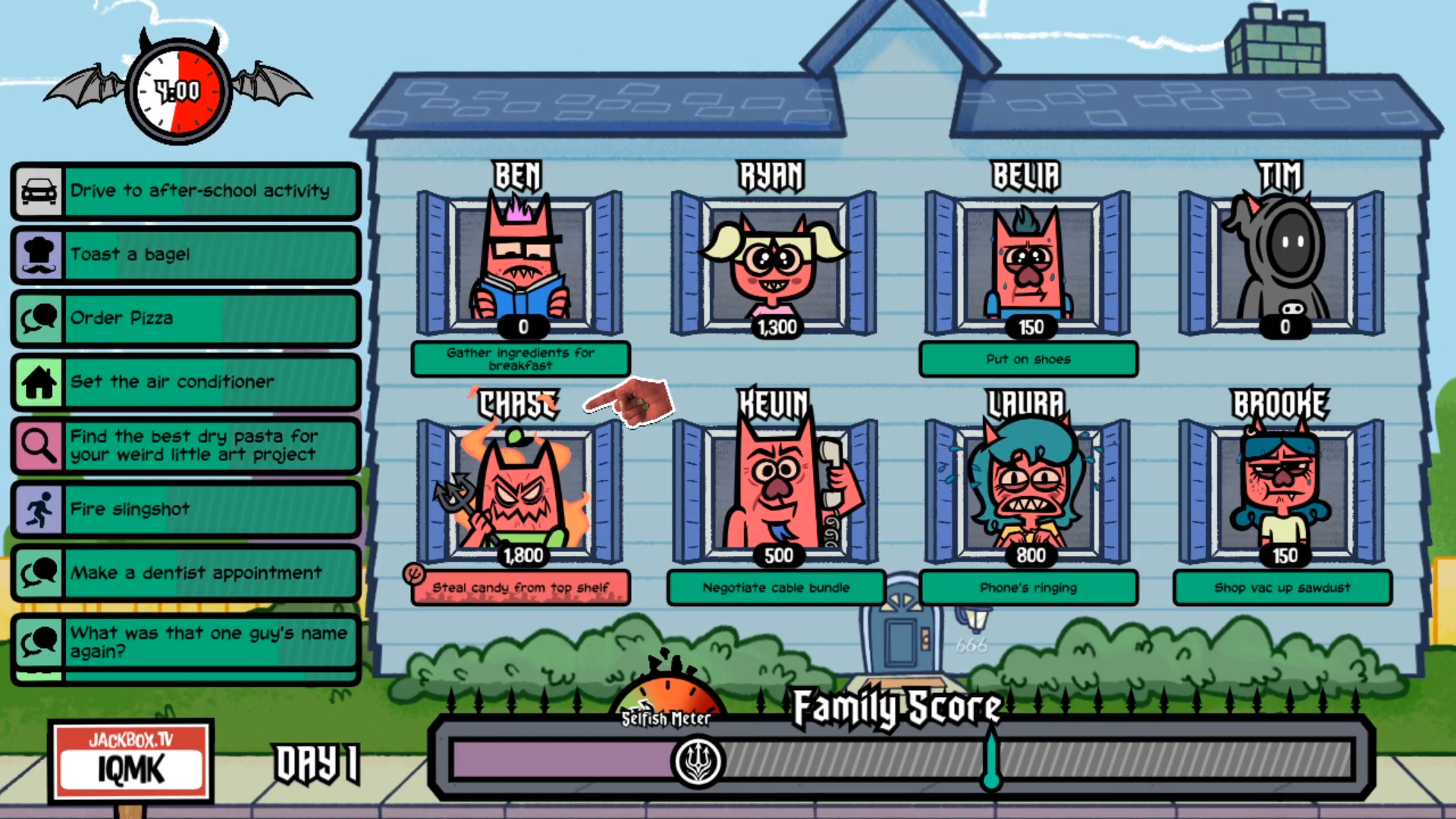 This is probably my personal favorite from Jackbox 7, with Champ’d Up as a challenger. Players are a family of devils trying to blend in as a sitcom-style suburban human family. They do this by performing mundane human activities like fixing the AC, taking the kids to practice, and setting the table for dinner. These are done through quick touchscreen minigames, sort of like Wario Ware. The family must meet a score target, but the catch is players compete with their own individual score. This personal score is bolstered by slacking off and doing selfish tasks like reading trashy novels or arguing on social media.

The Devils And The Details is longer and more involved than most Jackbox games. Many of the family tasks involve multiple players communicating to do things like give directions. When I played this over Discord like a responsible social distancer, we often shouted over one another as two partner tasks happened at the same time. This isn’t a casual game like Quiplash that you can just hand to the random co-worker at the party. But if you do have a group that gets games quickly and can communicate well (preferably in the same room), this one is so worth it.

Champ’d Up – Finally, Tee K.O. Has A Worthy Opponent! 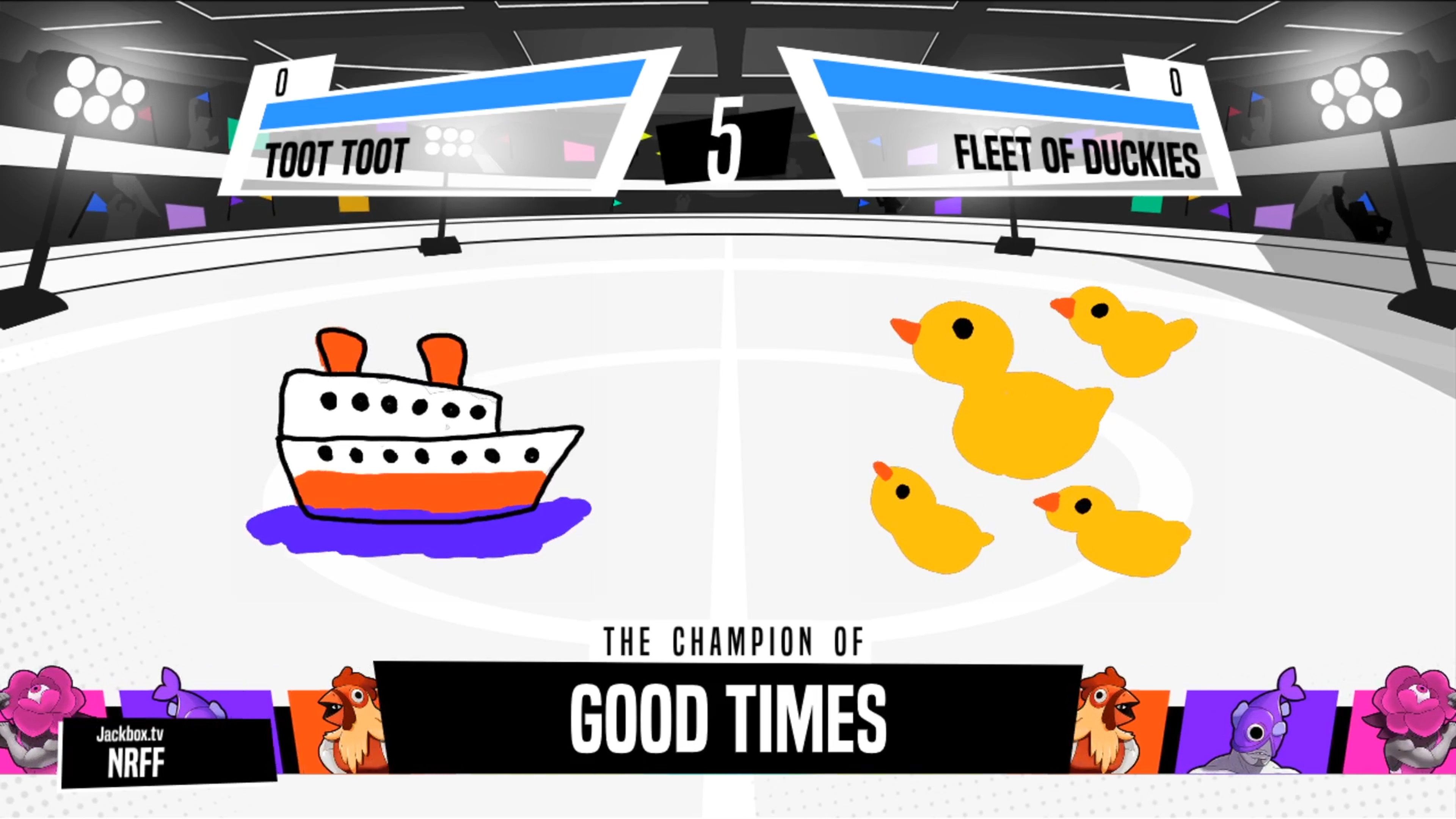 The obligatory drawing game is here and it’s one of the best ever. In perhaps the wildest concept for a Jackbox game, players are trainers for some kind of wrestling/Street Fighter competition. Their entrants are drawings they make based on titles the game gives. For instance, I got “Champion of Cuddling.” I drew a fuzzy creature opening its arms for a hug. Then it sets my drawing to an opponent, who had to make a response drawing on sight alone. So another player saw my fuzzy and had to make something that could compete, but without knowing they were supposed to draw a cuddling champion. Then the two drawings face off for the remaining players to vote on.

It’s hard to get why Champ’d Up is so fun just by reading about it. The sheer ridiculousness of the categories and the creativity they inspire, matched with the hyped sports theming, make for an energetic laugh fest. It only gets better the more you play, as you can call upon previous games’ drawings as a tag-team guest. It’s a bummer, then, that Champ’d Up is the buggiest game in the pack. The finished drawings always show up half-realized on the TV screen, but full on the phone screen when you vote. In that way, it’s still playable, but the big reveal loses some of its impact. It was also the first game to crash for me.

Talking Points – Thank You For Coming To My Ted Talk 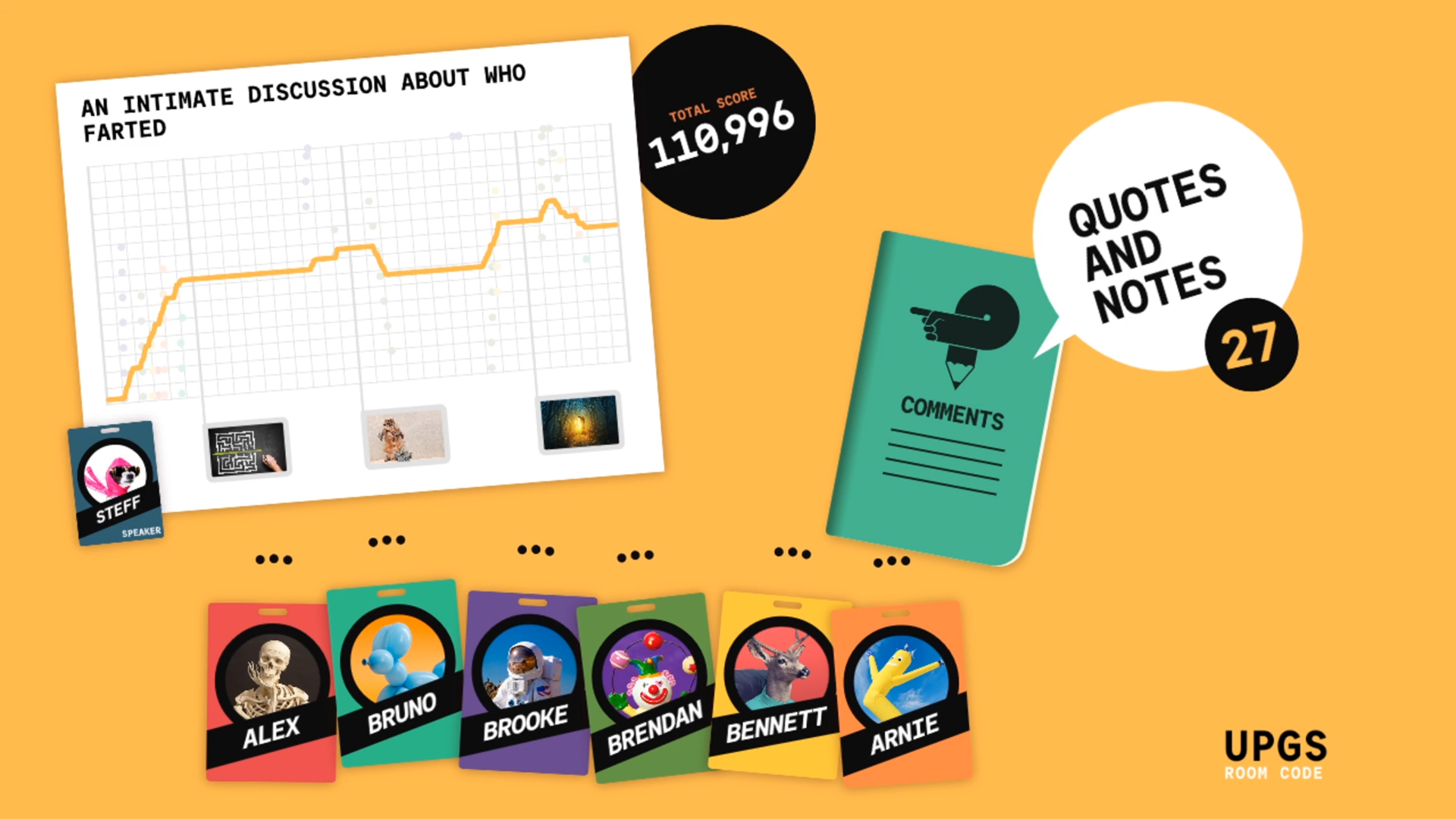 In Talking Points, you make up a Ted Talk on the spot. Players give each other a topic like “Why You Shouldn’t Fear _.” Another player gets the result, and must make up a speech on the spot. Another player acts as an assistant who “helps” by providing slides. These slides can relate to the topic or be entirely nonsensical. The player giving the speech has to incorporate them as they flash on the screen, and hope a good/funny speech is the result.

Playing Talking Points reminded me of my review for Jackbox 6 – a pack I felt leaned more towards performance than gaming skill. If your friend group loves improv, they’ll drink up the spotlight this game gives. The shy are going to dread playing it. And again, like with Devils and the Details, it’s a lot more fun without Discord cutting off someone’s audio mid-speech.

Blather ‘Round – The Next Classic? 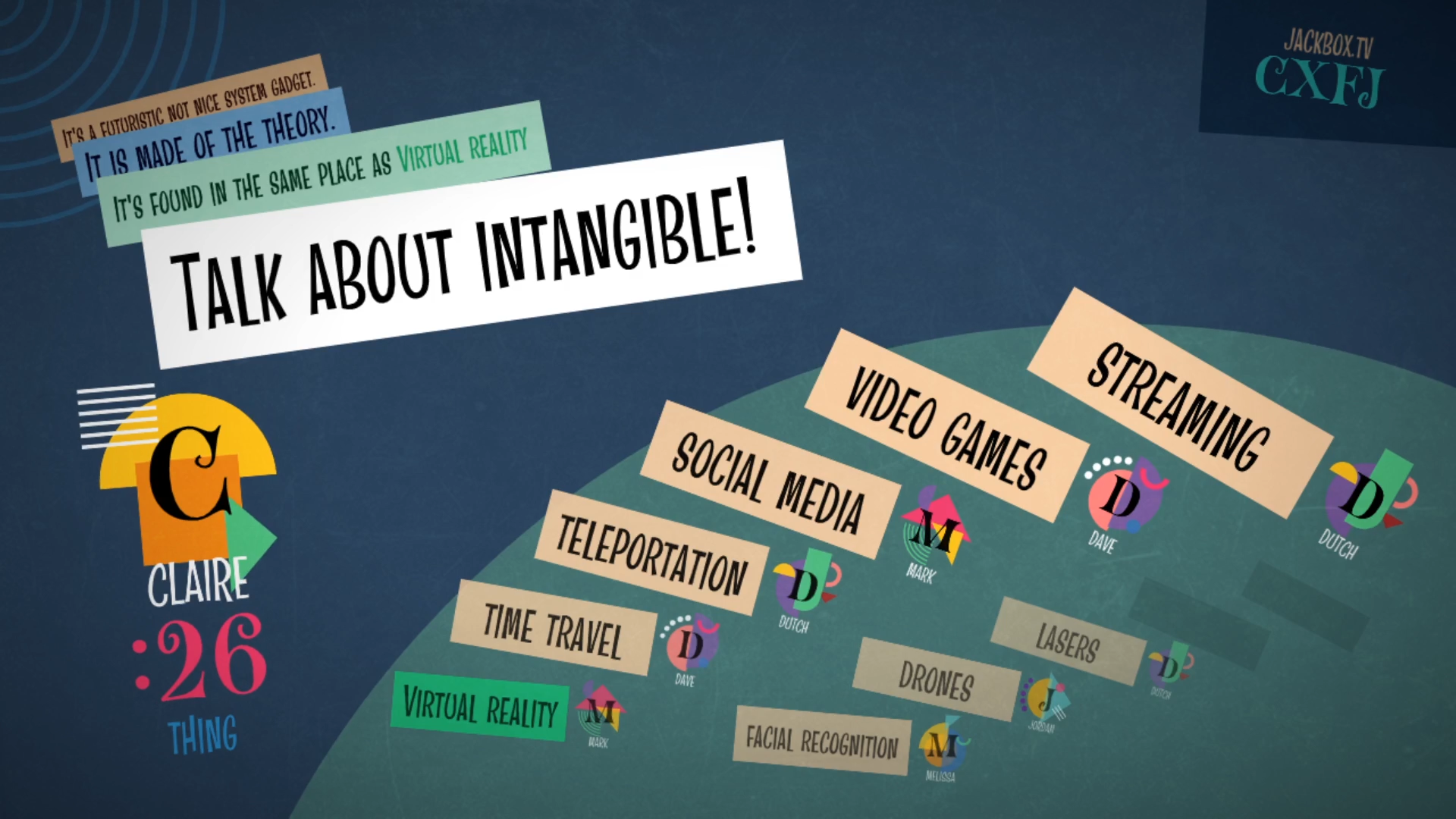 Fortunately, Jackbox 7 ends with a solid new addition. Blather ‘Round gives you a person, place, or thing, and a vague list of words to describe it. You want other players to guess the topic, but are only allowed to add more vague follow-up descriptions or tag someone’s guess as helpful. You get more points when they get it faster, and they get points for guessing correctly.

Blather ‘Round is easy-to-understand, rewards skill, is funny, and has relatively fast rounds. It has all the ingredients of a standout party game, and is the one my group wanted to revisit the most. It would be great to see it return in a future Jackbox with some kind of finale game that twists the formula.

After seven entries, it’s clear the Jackbox team knows how to make a fun set of party games. Jackbox 7 keeps it up with an instant classic in Blather ‘Round, another solid take on Quiplash, a zany time with Devils and the Details, the unfortunately bugged Champ’d Up, and Talking Points, a game that’s really hurt by the current world circumstances. I can’t blame Jackbox Games for the pandemic, but two of these games do take a hit from being played over Discord. And the bugs may be a side effect of at-home development, but I can’t say for sure. All I can say is Champ’d Up has so much potential and is destined for Twitch fame once its bugs are flattened. So yes, Jackbox 7 is worth buying. But maybe wait for an eventual sale. And for this dumb pandemic to be over.

A Nintendo Switch copy of Jackbox Party Pack 7 was given to TheGamer for this review. It’s available now on all conceivable platforms.

NEXT: Second Extinction Preview: Cover Me In Dino Goo 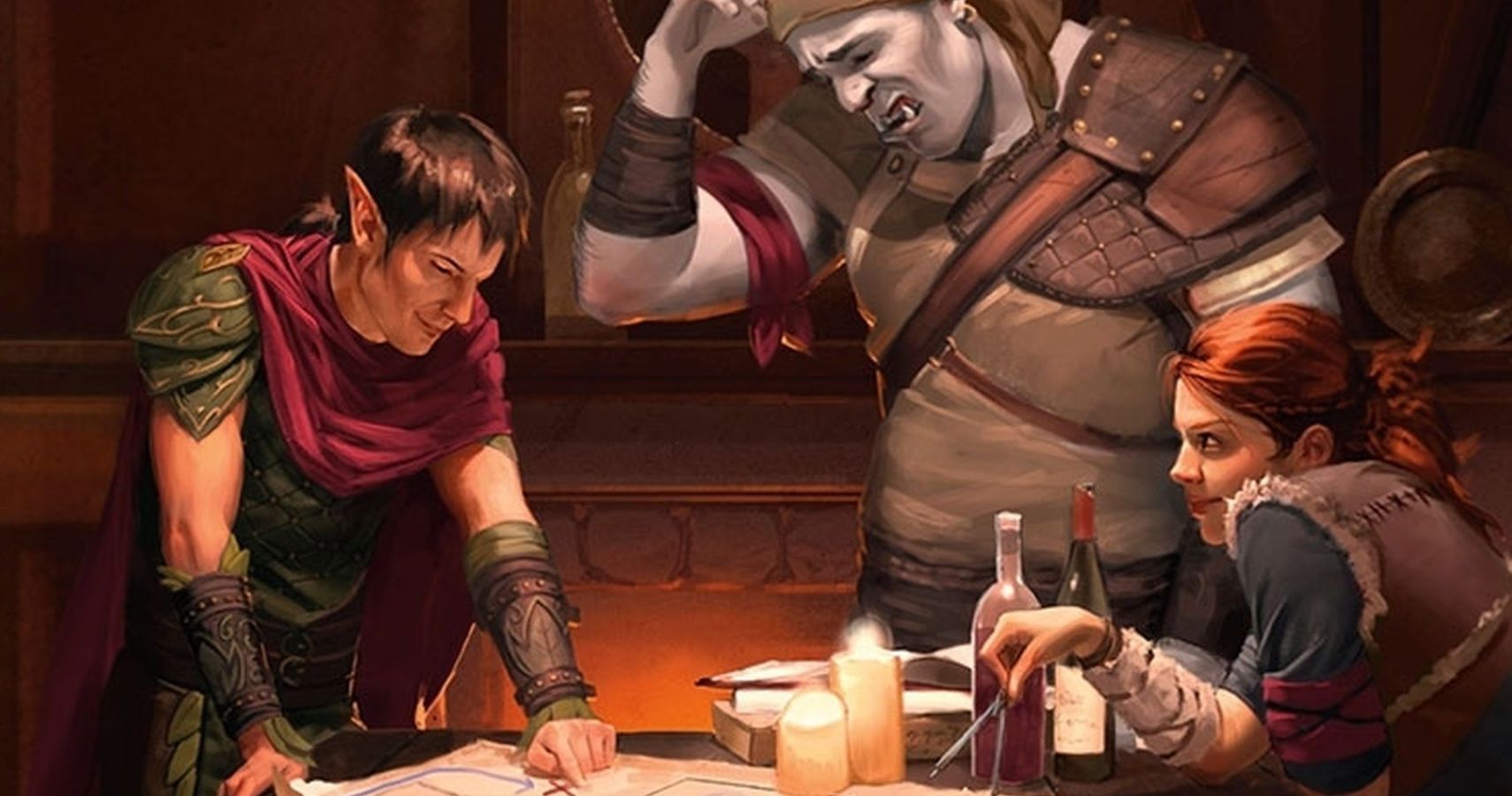