My first encounter with an alien life form in Journey to the Savage Planet establishes the game’s tone in no uncertain terms.

I spot a rotund, featherless, and mostly harmless Pufferbird minding its own business in a cave near my crashed spaceship. My ship’s AI helpfully points out that the bird contains resources I need, and the on-screen hint urges me to try a melee attack. I hit the indicated button, and slam the big-eyed creature with an unexpectedly savage backhand. It explodes into a puddle of neon green goo, covering the ground, walls, and my hands with slime.

I do not come in peace, it turns out.

Journey to the Savage Planet drops me onto an uncharted planet, unprepared and uninformed, with the goal of determining if the planet is safe for human habitation or corporate exploitation. It would also be nice, for me, personally, if I’m able to refuel my ship so I can return home. My boss and the ship’s AI don’t seem too concerned with that secondary objective.

I’m little more than an expendable office drone — and I mean that literally. My ship’s AI happily 3D-prints a fresh copy of me every time I die, and sends me right back out into the field. If I stumble across my corpse on a subsequent trip, I get a prompt to “shamefully bury my body.”

I’m just doing my job, though I don’t really have a choice. Kindred Aerospace (“the fourth best interstellar exploration company!”) is constantly reminding me of my burden with mandatory email surveys, increasingly manic video messages from CEO Martin Tweed, and of course that aforementioned fact that they sent me into space without enough fuel to get home, or even land safely. I didn’t crash on this planet because I failed somehow; I crashed because it saved my company a few dollars in fuel costs.

I wander around the planet’s colorful surface, cataloguing the local flora and fauna and collecting resources by slapping and blasting aliens to death. Back on Earth, my boss watches my findings roll in, and modifies my mission accordingly. What starts as a quick survey mission quickly becomes a planet-spanning quest to bring him back a powerful artifact.

I have the option to ignore him, of course. All I really need to do is refuel my ship and fly home. I’m warned that I’ll be ravaged on social media if I do, however, and this threat is followed up by an ending that’s — well, let’s just say it’s unsatisfying if I decide to go through with it anyway. Escape is an option, but I have to keep working for the man in the game if I want to keep playing the game in real life.

The existential void of late capitalism isn’t new thematic ground for games these days, but that hasn’t prevented Journey to the Savage Planet’s creators from finding new angles from which to stare into the abyss. The exploding ugly-cute alien creatures, the interstitial commercials, my AI overseer, or even just the way my character flails his arm around for a slap attack all plant a smile on my face throughout the 15 hours or so it takes me to complete the game. 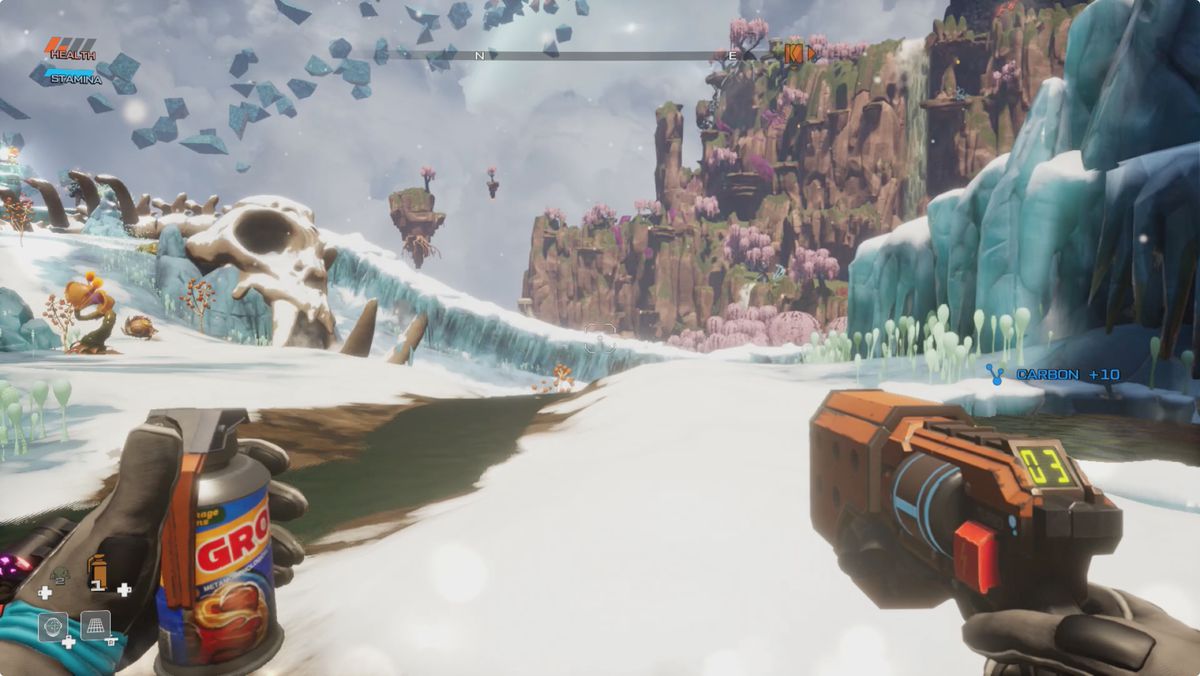 AR-Y26 is a nice place to visit.
Image: Typhoon Studios/505 Games via Polygon

Through this journey, I use plants, rock formations, and the guts of local animals to upgrade myself from hapless Pufferbird slapper to menacing resource harvester. I get an exhaust-spewing jetpack, an exceptionally lethal pistol, and a Proton Tether that will remind folks of Link’s Hookshot.

Navigation and exploration are familiar and comfortable, and I’m soon running, leaping, and climbing across the surface of the planet from objective to objective. If I wander a little off the main path, I discover secrets, platforming puzzles, and extra resources. I can’t reach them all at first, but each area is dense enough with optional challenges that I rarely feel barricaded down the obvious main path.

The self-consciously bright and cheery criticism of capitalism and worker exploitation might have bogged down a lesser game, but the feeling of simply playing around in the planet’s untamed environments is itself a joy. Even while it confronts me with email reminders about my current crippling debt, the game never forgets to be fun first. The act of doing my job doesn’t have to be grim, even if the job itself doesn’t offer much hope for the future.

Which may make Journey to the Savage Planet one of the more effectively absurd games in recent memory. From my funhouse-mirror caricature of a CEO to the gentle arc of a punted space chicken disappearing over the horizon, it always strikes the right balance of funny, fun, and cautionary. It never stops to dwell on its existential undercurrents, but it doesn’t gloss over them either. 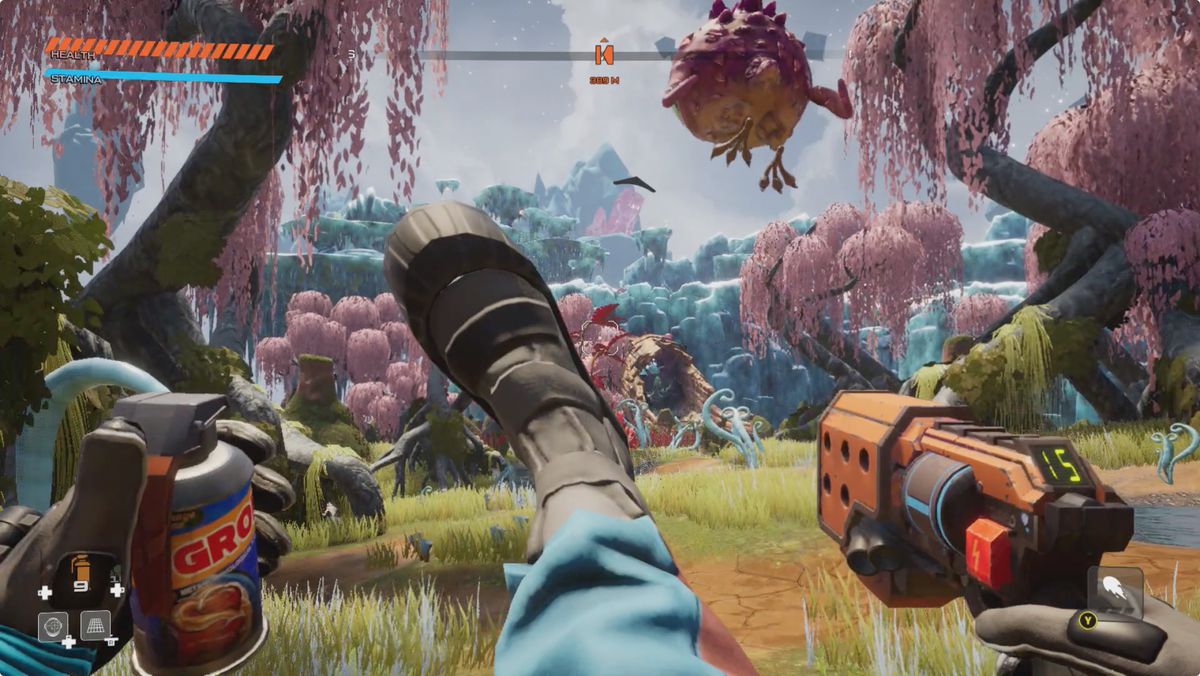 Punting a Pufferbird is a great way to take the edge off of being trapped in a corporate dystopia.
Image: Typhoon Studios/505 Games via Polygon

The game doesn’t shy away from its cautionary parable of environmental exploitation and corporate greed, and it doesn’t relegate it to window dressing. Every new story beat I uncover either highlights or echoes my CEO’s self-serving shortsightedness.

I find my moments of escapist joy, but the game never quite lets me forget that my goal here is one of exploitation. The set dressing all hammers home the issue of colonialism: I am here to get what I can out of the environment and whatever life I find, all to raise my employer’s stock price a few cents. I may be an invading force of one, but my actions serve something more explicitly nefarious.

The resulting tone is somewhere between The Martian Chronicles and Hitchhiker’s Guide to the Galaxy. I’m not, from my perspective on the ground, here to sway the tides of history; I’m here to file my paperwork, pick up my paycheck, and pay my bills. I might get better toys along the way, but I’m always just this guy who’s working to survive, getting yelled at by his boss, eking out moments of pleasure in the role where and when I can.

And that’s what makes Journey to the Savage Planet’s subtext so unsettling, and the game an unexpected autopsy of the open-world formula. This is one of hundreds of games that ask us to kill and conquer, but never question our actions. The story tells us we’re here to have fun, and supposedly save the world.

Journey to the Savage Planet will be released Jan. 28 on PlayStation 4, Windows PC via the Epic Games Store, and Xbox One. The game was reviewed on Xbox One using a final “retail” download code provided by 505 Games. You can find additional information about Polygon’s ethics policy here.