Mass Effect Andromeda was widely mocked upon its release, and I can understand many of the criticisms levelled against it. Its story and characters didn’t live up to what we saw in the original trilogy, while a number of bugs and glitches doomed the ambitious sequel as meme material before it had even reached the hands of players. Some have warmed to it over the years, although I never played it, its divisive reception forcing me to focus on more welcoming adventures in a year absolutely filled with them.

Despite all of this, it got a bad rap, marred with a legacy it doesn’t deserve. BioWare was dealt a bad hand by Electronic Arts and it did the best it could, and it’s important to consider the studio that created our beloved trilogy simply didn’t exist anymore, evolving into something fundamentally different in the years after Mass Effect 3’s release. Whether you believed it or not, the expectations Andromeda set up for itself were always impossible to meet, with fans building up an image in their head so ambitious, so drenched with possibility, that the finished product was always going to underwhelm.

And underwhelm it did, causing the franchise to be shelved for a number of years, with plot threads left untouched as downloadable content was cancelled in the wake of BioWare’s focus on Anthem – which itself would meet an even worse fate. In the years that followed players would warm to Andromeda, with our own Cian Maher declaring it as far superior to Mass Effect 3, a take that I currently don’t have the series’ experience to agree with, but perhaps he’s onto something. We’ll see soon enough, since my experience with Legendary Edition has me ready and willing to jump into the sequel for the very first time. 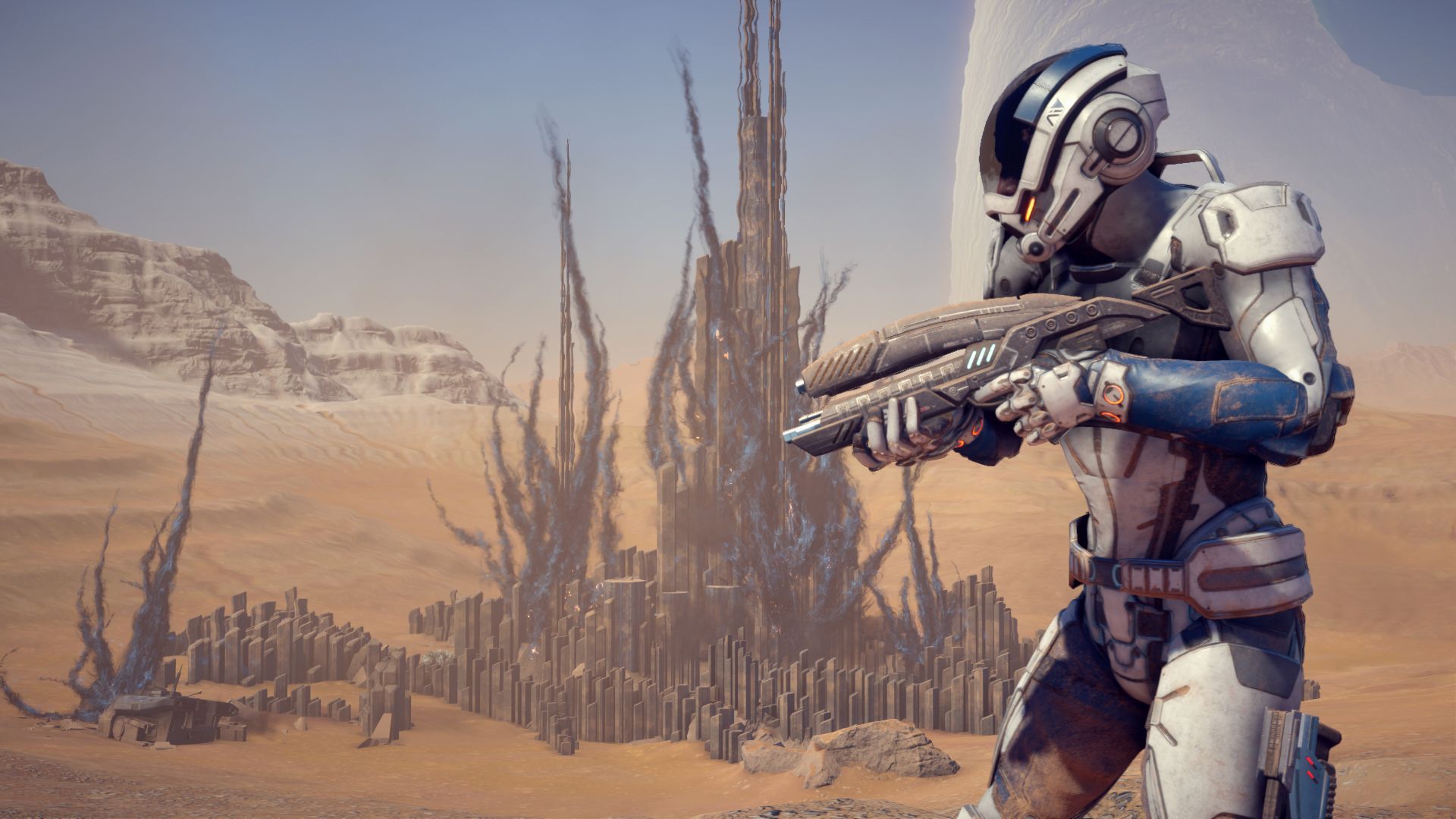 I remember the hype surrounding Mass Effect Andromeda upon its reveal, with Electronic Arts teasing the next big thing from BioWare in its annual press conferences with lofty video packages that teased something unlike we’d ever seen before. It was all a big lie, or possibly a collection of enthusiastic developers who had yet to be faced with the reality that awaited them. Beyond this, we received a CG debut trailer and a gameplay clip or two before press finally got their hands on the game. Once impressions and footage were out in the wild, public perception on Andromeda changed almost immediately. It became a meme, millions poking fun at its goofy facial animations, iffy writing, and laughable dramatic delivery. It was easy to mock, with many unaware of the behind the scenes management that continued to hinder the project. Then it launched – and I have an inkling that you know the rest.

I feel so bad for BioWare, and suspect that Mass Effect Andromeda could have been something special if it had enough time, money, and love poured into it. Our very own reports have highlighted cut races and storylines from the game, with its creators clearly wanting to do more with the experience but so much work was simply impossible given the confines they found themselves in. Perhaps we’ll see some of these ambitions realised in Mass Effect 4, which is making a return to the Milky Way alongside a number of familiar faces. As sequels go, it appears to be a safe bet, one that returns to the original trilogy’s comfort instead of stepping into new territory like Andromeda did. If they bring back Shepard, I’ll be pissed, but I’d like to believe BioWare is smart enough to make such a move.

However, all of this history has only heightened my fascination for Mass Effect Andromeda, fostering a sense of excitement inside me to finally see what it’s all about once I’m done with the Legendary Edition. I won’t be surprised if I leave disappointed, with much of what I’ve heard about the game filling me with scepticism. Its characters, narrative, and general worldbuilding don’t appear to have the gravitas of Commander Shepard’s own adventures, but perhaps they were never destined to, and I should put aside such preconceptions and take Andromeda for what it is – the first chapter in a new story that will never see a continuation.

Alex Ryder’s occupation as the Pathfinder is meant to hold a similar level of weight to Commander Shepard’s as a Spectre, both having the potential to change the galaxy but in fundamentally different ways. Ryder is meant to communicate and establish relationships with new races, although this unfortunately devolves into violence because we can’t have video games without some of that. Commander Shepard begins the trilogy as a master of conflict, ready to shoot first and ask questions later if you decide to play them in such a way. Beyond reading articles from my colleagues and hearing anecdotes from friends, I don’t know that much about Mass Effect Andromeda, which is either a blessing or a curse given my enthusiasm to jump into it.

Putting aside the history of Mass Effect Andromeda and the controversy that surrounds it, I think there’s something special about delving into doomed projects like this. While it began life as the start of a new journey for the franchise, it slowly became clear that BioWare was abandoning its ship, both in response to player reception and Electronic Arts coming to terms with its own failures. Alex Ryder’s personal pilgrimage will never be completed, with plot threads left dangling alongside galactic exploits that many labelled as a profound dissapointment. There’s an unintended beauty to this, Mass Andromeda becoming an accidental relic inside a franchise that people from around the world still adore, and I think it should be treasured as such, even if it failed to reach the goals it set out to achieve.