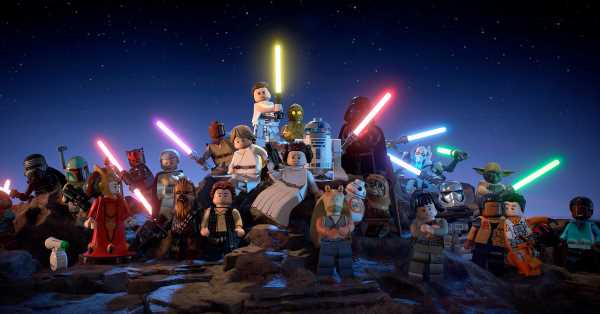 In LEGO Star Wars: The Skywalker Saga, the Star Wars galaxy is yours to explore, smash apart, and rebuild. You can play through abbreviated, kid-friendly comedy versions of all nine of the numbered Star Wars films, run wild across two dozen planets, and cycle through about 400 playable characters and costume variants. The Skywalker Saga might be the most complete and accessible Star Wars video game experience to date.

The game is also overflowing with jokes, references, and background gags for attentive players, particularly if you’re a chapter-and-verse Star Wars fan with one foot in its expanded universe of comics, novels, and video games. We’ve compiled a list of some of the best hidden treats we found during our playthrough.

While many recognizable Star Wars landmarks from the nine episodes are incorporated into the game via puzzles and side missions, there are a few artifacts — plus some foreign objects — hidden away in nooks and crannies:

Aurebesh You Didn’t Catch All of These

Like most visual media in the Star Wars universe, The Skywalker Saga makes liberal use of Aurebesh, which is the written form of Basic, the language spoken by most of the main characters. And since every letter in our Latin-script alphabet has a corresponding letter in Aurebesh, the latter can easily be translated into English. As such, you can stop on any street in the Uscru District on Coruscant and translate the name of every storefront and find a few inside jokes. Some shop names include:

There’s also Aurebesh aplenty in the game’s cinematics, most of which go by too quickly to translate without grabbing a screenshot. (Unless you’re actually fluent. We know you’re out there and we salute you.) For instance, each boss in the game gets an introductory name card, featuring their name in English (or localized language) and then a subtitle in Aurebesh. Here’s the full name card for every boss in the main story campaign:

Outside of the bosses, there are a ton of other little extras hidden in Aurebesh throughout the game. Here are a few of our favorites:

The Skywalker Saga’s roster is incredibly deep, with 384 playable minifigs available to unlock at launch, including background characters like Willrow Hood (a.k.a. Ice Cream Maker Guy) and every single astromech shot off the hull of Queen Amidala’s ship during the escape from Naboo. Since the game is already pretty crowded with obscure references to all nine numbered episodes, this doesn’t leave much room for nods to the wider expanded universe from the comics, novels, TV shows, and video games — but we’ve cataloged as many as we could find:

The Skywalker Saga also includes a few inside jokes about the behind-the-scenes history of the Star Wars franchise, movies that inspired the space opera, and pop-cultural spoofs:

The Skywalker Saga also offers its storytellers the opportunity to add jokes to the original trilogy that call forward to stories that were created much later:

These are the highlights we’ve discovered after one playthrough of the full story mode, and completing a mere 36% of the game’s puzzles and mini-games. We’ve yet to experience it ourselves, but a Rebel trooper on Yavin 4 teases that there’s a special reward awaiting players who reach 100% game completion. Once you’ve collected everything there is to collect in The Skywalker Saga, make your way to the throne room near the top of the Temple on Yavin 4 (where Luke and Han receive their medals at the end of A New Hope). There, you’ll find the main cast of the series standing around a single switch giving you a round of applause. Throw the switch, and enjoy a dance remix of the saga’s musical themes and an endless fountain of studs to spend on … well, nothing. You’ve already bought everything.