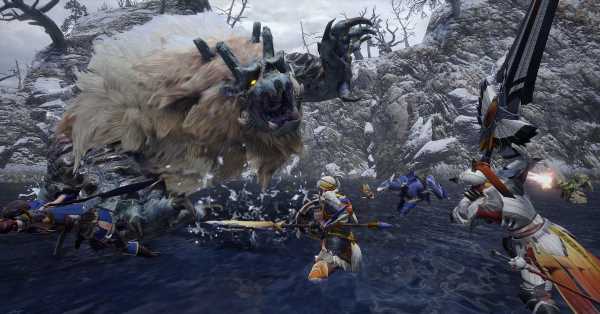 The movement in Monster Hunter Rise finally clicked for me as I soared above the Lagombi’s head.

The Lagombi is an obnoxious Monster Hunter beast, a bearlike critter that slides on its belly at high speeds. When it would slide, I would dodge, but it didn’t take long for me to realize that I wasn’t doing a good job. Movements left and right were too slow; I needed to think vertically.

I started anticipating the Lagombi’s slides even before I finished the first fight. Then I used my new Wirebug to soar into the sky and hang high above my prey below. The beast tired itself out looking for me, and I fell from the heavens and hit the monster with a massive blow from my hammer.

This is not the Monster Hunter of Monster Hunter: World. Rise is faster — players have far more in-game mobility, and it’s an even better starting place for new Hunters.

Lowering the floor and raising the ceiling

The Monster Hunter series is known for being unfriendly to newcomers, with deliberate combat and loads of complex menus to navigate. Players gather resources, take on lengthy boss fights with energetic monsters, and skin their prey to make better gear for the next hunt. The series is slow-moving, a trait that offers finesse to players who master its timing, but can throw off newbies trying to survive their first hunt.

The Wirebug — a living creature that gives you the ability to dash through the sky like Spider-Man — changes that. The X button takes me straight into the air, and A dashes me forward while holding the ZL trigger on my Switch. I can also hold ZL to aim my Wirebug more precisely, hitting ZR when I’m ready to fly a short distance. I can press A in midair to hang from a Wirebug indefinitely, or B after getting hit by a monster to get myself back on my feet. The variety in movement options offers a level of finesse I’ve never had in a Monster Hunter game before.

The Wirebug is not a tool you need to equip in Monster Hunter Rise; it’s an unlimited system with a short cooldown, and it’s always with you, even back in town when you’re crafting weapons. I have two Wirebugs when I start a hunt. I can use them back to back to dash twice as far, or just one at a time to get myself in the air for a quick strike. I can climb a mountain by alternating between zipping and running up the side. The Wirebug opens up the entire map as playable space, instead of the prebuilt alleyways and arenas from previous games where I can battle beasts and collect mushrooms.

The Rakna-Kadaki is a new monster in Monster Hunter Rise.
Image: Capcom

This mobility helps give Rise a more modern feel than its predecessors. Instead of lying on the ground after a big hit, I can use my Wirebug to recover in midair. It lets me pull myself to safety and heal before the monster can catch me again. I don’t only have to choose between dodging left or right; I can also dodge up. I can escape a fight by scaling a mountain, or follow a retreating monster by zipping over some buildings. I have more chances to save myself from the often brutal enemy AI.

But that mobility cuts both ways. As it lowers Rise’s skill floor, it also raises the skill ceiling, allowing for incredible plays. I started Rise using the Wirebug just to dodge and recover, but it didn’t take me long to learn how to zip around fights and bash on the monster from creative angles. I can zip to dodge an attack, dodge again in midair, and bring my hammer down on the monster’s head with a crack.

It’s a satisfying feeling, being in complete control of my movements.

The Wirebug gets even more complex. I can spend my Wirebug charges to do powerful Silkbind moves, which deal a special kind of damage that tires monsters and allows me to ride them.

Monster Hunter: World allowed me to ride on a monster’s back and knock it over to damage it. But Wyvern Riding, the new mounting system in Rise, is something else entirely. When I climb aboard my monster, I’m no longer a Hunter from the small village of Kamura. I am the Tigrex or the Magnamalo, and I can use this powerful body to deal some major damage. This breaks up the monotony of the 20- to 30-minute hunts that new players go through — but, like all things in Rise, it also allows veterans to prove their skills.

The Wirebug changes the entire pace of Rise. Monsters attack faster because I can dodge faster. Areas are more vertical because I have the means to climb hills, mountains, buildings, cliffs, and bluffs.

The Wirebug creates a host of gameplay opportunities outside of Monster Hunter’s minute-to-minute combat, and Rise’s new Rampage mode is perhaps the best example of what’s now possible.

Rampage is a tower defense quest that takes place in a variety of arenas, all situated around the village of Kamura. A horde of monsters is attacking your home, and you need to fend them off.

All of Rise’s improvements make its ending that much more disappointing. Without getting into specifics, the game ends very abruptly prior to its planned April update, which Capcom says will add a few monsters and uncap the Hunter Rank system. With the end of the story scheduled to arrive about a month after launch, and Monster Hunter games taking 40 hours or so to finish, this may not be an issue that will impact many hunters. But it’s worth knowing what you’re signing up for if you’re a hardcore player.

Rampages play out in the game’s normal third-person perspective. But the arenas are huge, and the distance between where I am and where I need to be makes walking feel far too slow. I need to zip up and around the map to set up turrets and level up my base as I progress.

The arenas have to be large to accommodate the size of some of these monsters, so a tower defense mode like this wouldn’t work without the Wirebug’s added mobility. The freedom to fly from one turret to the next prevents Rampages from ever being dull, and leaves me juggling turret repairs and setting new traps for the monsters — a welcome departure from the more structured hunts.

Despite my Wirebug zipping, Rise is still Monster Hunter at its core. It still offers those bullshit moments, like watching helplessly as your Hunter gets carted back to town because you couldn’t get them up fast enough. These are the kind of frustrations that cause Monster Hunter vets to look at you and shrug because … yeah, that’ll happen.

Rise’s new Rampage battles offer turrets like this one to help fend off monsters.
Image: Capcom

Rise’s more modern sensibilities don’t eliminate deaths that feel unfair or stuns that seem too long. The monster should be able to knock me out the same way I can knock it out, by Monster Hunter’s own philosophy. But Rise is another moment of growth in the series. The bullshit still exists, and the monsters still frustrate, but new players won’t run into these nuisances as often as they used to, because now they have more tools to save themselves with.

Monster Hunter Rise takes the accessible foundation that Capcom built in World and expands on it without breaking what makes Monster Hunter fun, including the deep combat and the feeling of progression as you defeat, skin, and wear one monster to fight the next. If World was the first step forward into a new era of Monster Hunter, Rise takes it even further.

Monster Hunter: World was a game I would recommend to friends, with some caveats. But Rise’s gameplay variety and mobility — all fueled by that little Wirebug — make it a must-try game for Monster Hunter skeptics and hardcore fans alike.

Monster Hunter Rise will be released March 26 on Nintendo Switch, and in early 2022 on Windows PC. The game was reviewed using a Switch eShop download code provided by Capcom. Vox Media has affiliate partnerships. These do not influence editorial content, though Vox Media may earn commissions for products purchased via affiliate links. You can find additional information about Polygon’s ethics policy here.