For much of its existence, Electronic Arts hasn’t been a publisher known for artsy games. Instead, the name has been synonymous with successful Triple A blockbusters such as FIFA and Battlefield. In 2016, with the inception of its EA Originals label that revolves entirely around bringing on hidden gem games like Fe, this has begun to change.

One of the newer titles to join the EA Originals roster is Sea of Solitude, a game about a young girl named Kay who has turned into a monster. She traverses a half submerged city by boat, faces her demons, and attempts to discover why she herself has turned into a beast.

Sea of Solitude was inspired from real-life events, particularly battles creative director Cornelia Geppert has faced. The concept is born out of the grief and turmoil  she faced through relationships, mental health, and feeling unfulfilled at her job.

Geppert explained to me that her company, Jo-Mei Games, was exclusively creating free-to-play games for years because it was necessary to stay afloat. Particularly in Germany, which is where the Jo-Mei studio is located, the market is filled with free-to-play developers. “I felt so unhappy with it after a while because I wanted always to produce art and meaningful games,” says Geppert. “And it wasn’t possible.”

That is, until the team came up with a more artistic concept and took a risk with Sea of Solitude. After being snatched up by Electronic Arts, it became all the more viable to make the game Geppert always dreamed of making.

“The main theme of the game is loneliness, like when humans get too lonely they turn into monsters,” Geppert says. “So I wanted to show different types of loneliness and how people cope with it, but also how friends and family see those who struggle.”

Sea of Solitude is about Kay’s personal journey and coming to terms with who she is. In the demo I saw at E3, there were behemoth-sized threats like a giant crow flying above and a fish-like monster swimming beneath the depths of the water. However, you won’t ever be directly fighting these enemies, but instead trying to find your way past them, searching the environment, or solving puzzles to “overcome” them. 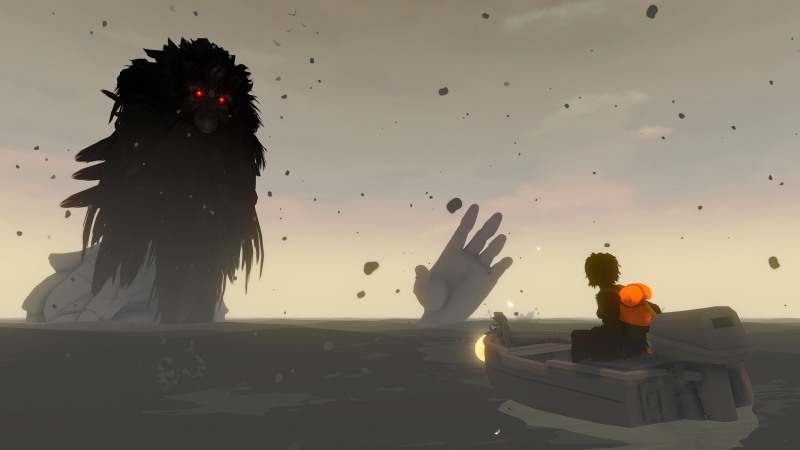 “Everything the monsters say are little hints, little pieces of the puzzle,” Geppert says. “So if you listen closely you get ideas, like ‘Oh, what could this monster mean? How are they connected to Kay?'”

During the brief hands-on time I had, I explored a school that was overrun with monsters. These foes looked a lot like Kay; black silhouettes with glowing red eyes and vaguely resembling children. At one point, they block my way so I can’t escape a room. To get past them, I trick them into chasing me in a circle and then run past them to the exit.

Geppert tells me weather plays a big part in the gameplay, particularly in how it affects safety and peril. It can be an indication while you play about what’s to come and how to prepare for what’s next.

“Each weather type has a different mechanic or a different level of danger,” Geppert says. “Sunny weather, for example, is a secure zone, but with rain you find danger.”

Sea of Solitude is gorgeous with its diverse color palette, appearing as bright and vivid in the daylight and with more muted colors during storms or rainfall. I enjoyed what I saw of it, and I’m hopeful it could be impactful for those with mental health struggles of their own, or at least increase empathy on some level for others. According to Geppert, every single line of dialogue and every moment has been crafted with those themes in mind.

“I love telling stories and having metaphors and symbolism so everything, every single beat has meaning,” Geppert says. “A player who simply wants to enjoy this fantasy setting can do so. But if you want to know the deeper story, then you have to listen to all the little details to really get it all.”

Sea of Solitude releases for PlayStation 4, Xbox One, and PC on July 5.