The first Pokémon I saw when I entered Pokémon Sword and Pokémon Shield’s new Wild Area was an Onix, a big, bulky string of rocks slithering around an open field.

With Sobble by my side — one of three starter Pokémon — I ventured out into the U.K.-inspired Galar region alongside my best friend and new rival, Hop. His brother Leon, the current Galar region champion, had just endorsed us for the Gym Challenge, a series of eight gyms to defeat across the region.

The Wild Area is the first major stop, a wide-open space that’s unlike any single zone I’ve seen before in a Pokémon game. I’m not required to do much of anything in the Wild Area, just explore. And there’s a lot to explore.

When I first entered the Wild Area and saw an Onix, I approached it warily, thinking I might be able to pick up a very strong Pokémon early in the game. I was wrong. The Onix knocked out my meager team of Pokémon — sad lizard Sobble and electric Corgi Yamper — and sent me straight back to the Wild Area Station to heal up. Sword and Shield certainly offers more exciting Pokémon than the usual bunch of bugs and rodents, but my team was no match for the Wild Area’s overleveled Onix. It’s a perfectly placed lesson in what’s to come: These aren’t the patches of tall grass I’ve grown accustomed to in Pokémon games. 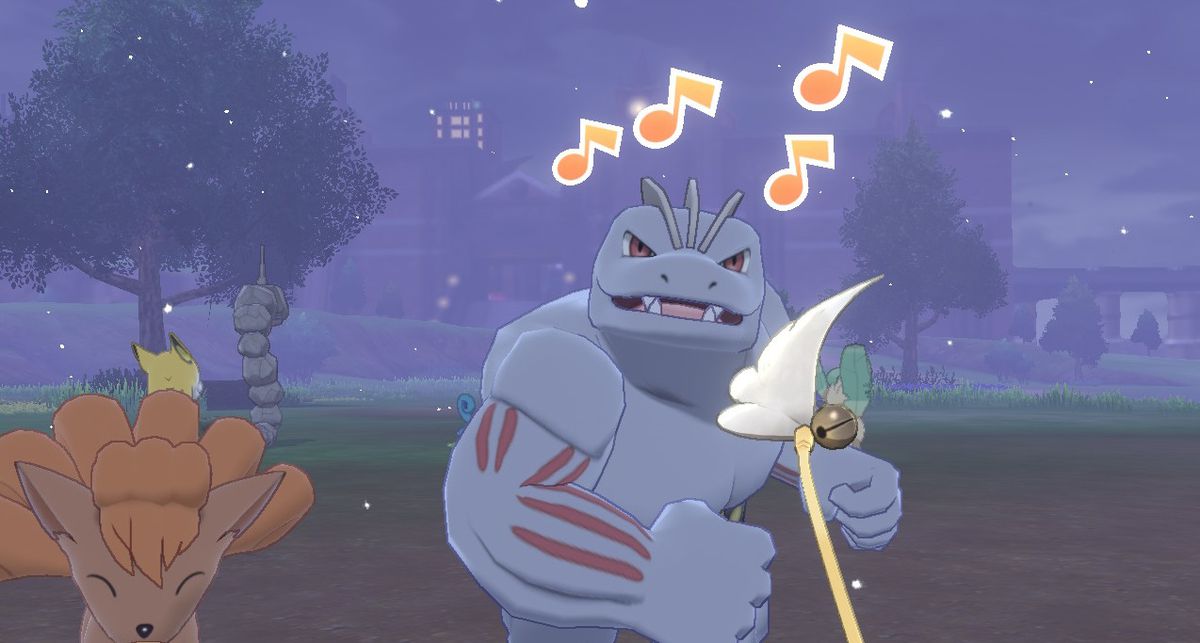 The Pokémon franchise is more than 20 years old. Its last game, Pokémon: Let’s Go!, was the franchise’s flawed-yet-charming move away from purely handheld gameplay when it was released on Nintendo Switch in 2018. Sword and Shield is an expansion of what Game Freak started with Let’s Go!, but with some meaningful changes. There’s a formula to Pokémon games: a preteen Pokémon trainer collecting pocket monsters to create a team strong enough to win a battle. The games are always nostalgic, but Sword and Shield is never mindless. It feels familiar in all the right ways, while adding elements that surprised me, for good and bad. But mostly good.

Sword and Shield’s story is still linear, but there’s enough in the Wild Area to allow for exploration that’s rare in recent Pokémon games. There are still routes and mines that connect each city’s gym, but plenty of the cities are accessible through the Wild Area, too. Still, you’ve got to complete the gym challenges in the story’s set order, uncovering an ancient mystery and meeting more rivals as you progress. But the Wild Area is there to break up the monotony of a tale that’s been told over and over again.

Pokémon Sword and Pokémon Shield are two separate games, but we’re referring to them as a single game because they’re largely the same game, save a few exclusives, like the new Legendary Pokémon Zacian and Zamazenta for Sword and Shield, respectively.

There are Galar versions of some Pokémon available exclusively in each game, too — Farfetch’d and Sirfetch’d in Sword, and Ponyta and Rapidash in Shield.

Though it’s a story Pokémon fans have heard before, Sword and Shield works because of its characters, both human and Pokémon — though not all are created equal. Game Freak always excels at character design, and Sword and Shield is no different, despite a few shortcomings. One of those shortcomings, unfortunately, is the main rival and best friend, Hop. He felt far less like a rival who’d push me to do better, and more like a delusional, overconfident mess. I actually felt bad after pummeling him time and again.

A more worthy rival is Marnie, a goth girl trainer whose goon squad of followers, Team Yell, follows her around. The members of Team Yell are less like villains and more like your Twitter mentions after you say anything bad about Ariana Grande online; they just like Marnie a lot, and will do anything for her to succeed. Honestly, I can’t blame them. Marnie rules.

Sword and Shield makes some visual changes to creatures both new and old, too. Dynamax — and Gigantamax, which is when the Pokémon is huge and has a new form and an extra special move called G-Max — Pokémon are essentially just large Pokémon with boosted stats and moves. While I love the idea of a gigantic Pikachu, I didn’t find the feature all too compelling in battle. I switched Dynamax on (powered by a bracelet I received early in the game) only when my opponent did, just to match their power. I never found much substance in the way it’s used. The only real value I got out of the mechanic was in seeing the new Pokémon forms. Generally, they’re hilarious: Alcremie transforms from a pile of whipped cream into a giant cake. 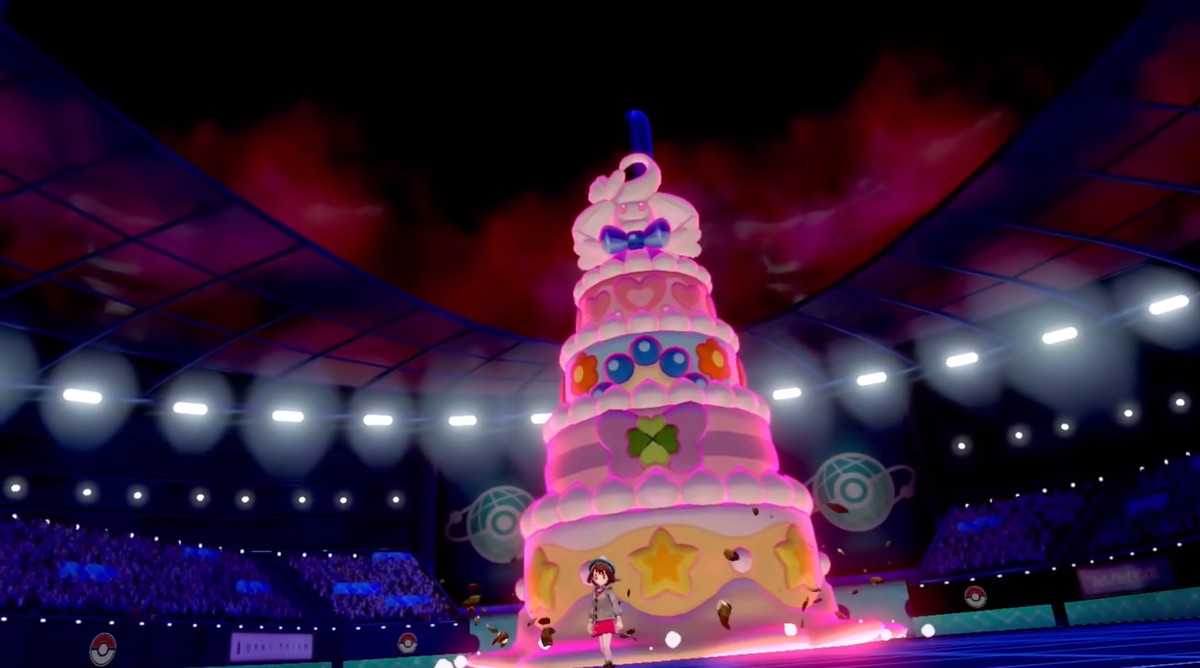 I’d much rather battle the old-fashioned way, by using a strategy I’ve designed in honing my Pokémon’s stats and in-type advantages. (The good news is that the majority of a battle plays out this way, as Dynamax mechanics only last for three moves.) During the story, Dynamax Pokémon only appear in the Gym Challenge, and leaders really only use them on their last Pokémon — which makes it predictable, and, frankly, kind of boring. That’s not to say that Gym Challenges on their own are boring; rather, that the implementation of the Dynamax mechanic is.

Gyms themselves are each dynamic and unique, with different “trials” leading up to the leader battle. For instance, to battle the grass-type gym leader Milo, I had to herd a flock of fluffy sheeplike Wooloos into a pen. Ahead of Nessa’s water-type battle, I had to solve a robust gated puzzle that truly challenged me.

Dynamax Pokémon do become more interesting in the Wild Areas’ Max Raid Battles, the new big battle system wherein four trainers take on one gigantic Pokémon. When Sword and Shield launches on Nov. 15, you’ll be able to team up with other players over the internet, but the servers weren’t up during the review period. Even offline, I was able to participate in Max Raid Battles with nonplayable characters. They started off easy, but ramped up quickly as I leveled up. Five gyms in, I was no longer able to skate by with just any Pokemon. I had to use strategy to adjust to my fellow trainers’ choices and limitations, which made the battles more compelling.

There are lots of powerful Pokémon in the Wild Area, among them the Dynamax ones that are super strong and carry loads of extra goodies, and others, like Onix, that are normal-sized but too strong to catch — at least until I’ve done some leveling of my own. These Pokémon are dangled in front of you like carrots, a reminder that one day you’ll be a strong enough trainer to catch ’em. They act more like minibosses for each particular section of the Wild Area, a challenge within a challenge. By defeating each Gym Challenge, you’re able to catch higher-level Pokémon.

Not all Pokémon in Sword and Shield’s Wild Area are too strong to catch, though. As in Pokémon: Let’s Go!, Pokémon appear on screen wandering through the world, which means that surprise battles with random creatures — a feature that dominated previous games — are limited. It’s easy to dodge the garbage rodents and only take on Pokémon you’re interested in adding to your team. Moving through the world is less of a grind. I can dodge Pokémon when I don’t want to battle, and seek them out when I do. 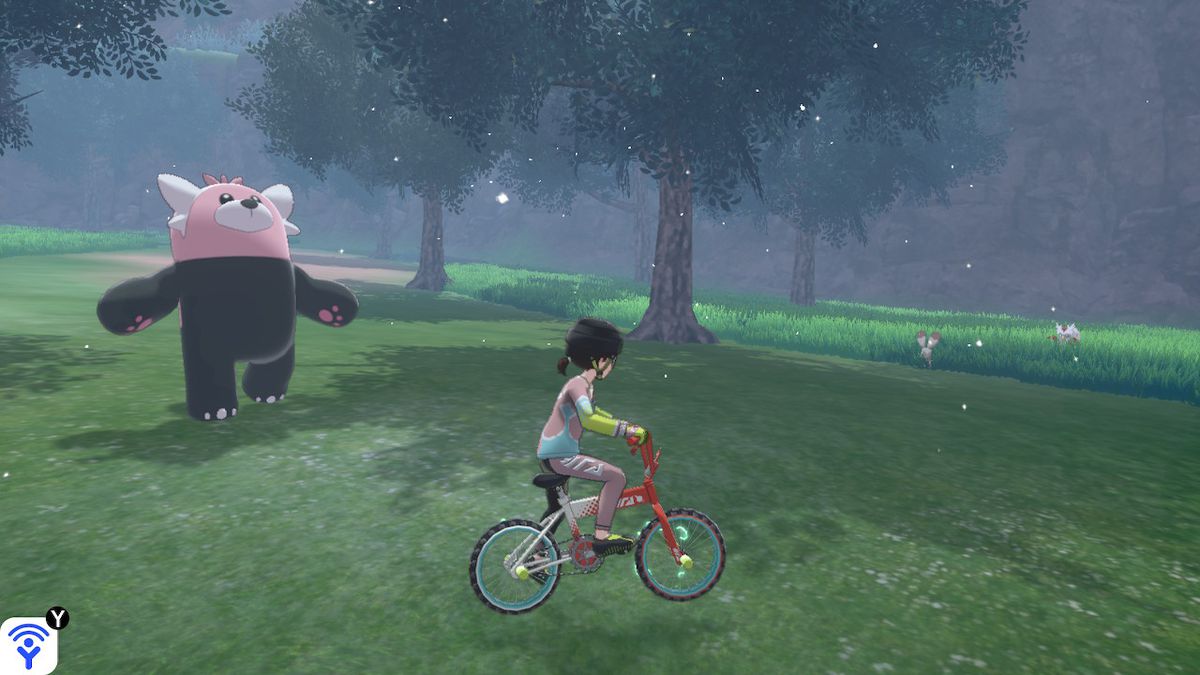 There are places where Sword and Shield reverts back to tradition, with Pokémon hiding out in tall grass, but for the majority of the game, there are plenty of creatures populating the world. (Glimwood Tangle, the forest shown off in a pre-release 24-hour livestream, is one area where Pokémon don’t spawn in the overworld.)

I didn’t play Pokémon: Let’s Go!, so Sword and Shield is my first Pokémon console game. More importantly, it’s the first game wherein I could experience the wonder of seeing these creatures — the ones I spent more than 20 years learning about — outside of battle sequences. It makes Pokémon feel alive, like they’re truly part of the world. Pokémon react to me as I pass by them. Some hide, while others are more bold; at one point, I had a swarm of Bewears following me in an unsettling parade. My Pokémon don’t follow alongside me, but other characters have pals that do. It’s in these little details where you can appreciate the personalities of the world’s Pokémon, which makes them feel like more than just sprites on a screen.

This extends into the way I can interact with my Pokémon in my camp, which is another important aspect of the Wild Area. Because the Wild Area is so large, it doesn’t make sense to trek back and forth to Pokémon Centers to heal. In the Pokémon Camp, I can tend to my team by cooking them food — curry — and playing with them. Cooking curry is, essentially, a timing minigame of fanning flames and stirring a pot. Making a good curry means restoring health and PP, but it grants experience points, too. It also makes Pokémon happy, which has benefits aside from being extremely cute: Pokémon that like you want to make you happy, so they withstand critical hits, among other things. (Not to mention, the adorable animations of Pokémon playing at Camp look great on a big screen. I love watching my team play.)

And so, I found myself visiting Pokémon Centers less frequently, instead opting to heal my Pokémon by crafting new curries. In fact, it’s one of my favorite parts of the game; it’s less about the mechanics of making a good curry, but in finding the ingredients to make new curries and seeing how my Pokémon react to them.

Even after completing the main story, which took around 30 hours, I was still able to find new ingredients in the Wild Area, as well as new place and Pokémon I hadn’t encountered before — which is to say that despite the national ’dex controversy, Sword and Shield feels full with the 400 pocket monsters that are in the game.

There’s a real wonder in wandering into an area you’ve pored over for hours already, only to find something new each time you return. Sometimes those surprises are small, like an apple you can make a new curry with. Other times, it’s a previously hidden location, an island in the middle of a lake with a half-dozen Bewear roaming around.

The Wild Area is always changing, too. Pokémon spawns change with the weather. You’re more likely to see ice Pokémon when it’s hailing, for instance. The Wild Area feels new each time I step into it.

The surprise in Sword and Shield is that I’m still finding things that surprise me, even after putting in so many hours. It’s in how Game Freak has made a linear game feel so much less linear. Make no mistake, Sword and Shield is not an open-world game. There are limitations. But the game’s designed for me not to notice them, and mostly, I don’t.

Pokémon Sword and Pokémon Shield will be released Nov. 15 on Nintendo Switch. The game was reviewed using a physical retail copy provided by Nintendo. You can find additional information about Polygon’s ethics policy here.