Rage 2 is one of the video gamiest video games I’ve ever played.

The game’s designers didn’t just borrow ideas from a couple iconic first-person shooters; They cribbed from the genre’s entire history. Good games, bad games, nearly forgotten ones. Remember that weapon from Dark Sector? Or that monster from Gears of War? Or that setting from Borderlands? Or that color palette from Sunset Overdrive?

And yet Rage 2 is so satisfying in action, so totally shameless, that I find it hard to put down. I could list the game’s inadequacies and describe its bizarre menus or upgrade structure all day long, but the more I talk about the game the more I find myself preferring to play it instead.

Rage 2 exists as a collection of unoriginal, but well-executed, ideas held together by a structure that can just barely be described as an open world.

I am the chosen one, I guess

I play as Walker, who can be a man or woman, depending on my choice at the story’s beginning. In this protracted intro, Walker puts on the armor of a fallen Ranger to become the most powerful soldier fighting against an authoritarian force called, what else, the Authority.

As Walker, I travel across a comparably small open-world map, searching for Arks — huge techno-chambers from (I believe) before the apocalypse (the story isn’t always clear) — that unlock new abilities and weapons, which I can then use to kill the many, many bandits and mutants who make this world unsafe for anyone without a gun.

After I complete the intro, I am told to visit a few characters across the map so we can work together to fight back against the Authority. Once I do those favors, the game’s practically over. What seems like Rage 2’s prologue is, in fact, the entire thing.

It’s best not to think about any of this too hard; the setup and mainline missions are just a thin excuse to justify my magical powers and array of weapons and send me off into the open world. The game would clearly rather I spend my time slaughtering mutants, collecting various currencies, and upgrading my soldier to god-like status. I can power up each gun, vehicle, ability, and secondary item like grenades or health packs using one of the game’s many tech trees, and then modify them again using a second series of menus that are strangely hidden behind the first.

While I can win just about every battle using the machine gun and shotgun I’m given in the game’s first hour, the rest of my tactical options are enjoyable enough that it’s worth fussing over each upgrade path to turn into a super-soldier who can stampede over everyone in his path. While I can use a combination of button presses to dodge in any direction, I never need to use this tactic while playing Rage 2 on Normal difficulty mode.

Why worry about evading when the game’s Overdrive function, which gives me super-powered weapons and partially restores my health, allows me to crush even boss characters without breaking a sweat?

There aren’t traditional levels, and there are very few missions. Each challenge basically requires me to drive to a specific place, kill the people there, collect currencies and items from various crates, and grow in power. Rage 2 is ostensibly an open-world game, but upgrades and weapons are given out at specific locations, and trying to explore by driving off the indicated path between each outpost is futile. Cliffs and bottomless pits make sure I’m rarely able to paint outside the lines.

The game’s marketing may try to push the idea that this is a punk-rock, neon-splattered celebration of rebellion, but the systems of Rage 2 don’t allow for much creativity outside of selecting the order in which I visit each area. The game’s structure suggests a linear, relatively short Doom-style single-player game that is only cosplaying as an open world title.

So why can’t I get the game out of my head?

I can use one ability to fling enemies backward, slamming them into walls or each other. I can use another ability to force enemies to float in the air, pulling other items toward them as if by the gravitational force of a very small black hole. I can turn myself into a human grenade and slam into the ground, reducing everyone around me to a bloody smear. I can upgrade my ability to leap high into the air until I can basically climb up the face of sheer-looking cliffs by spamming the jump button.

I can unlock new vehicles or find them in the world. I can turn my vehicle into a hell machine if I have the right parts and currencies. I can buy intel that tells me exactly where to go to unlock each weapon or power. 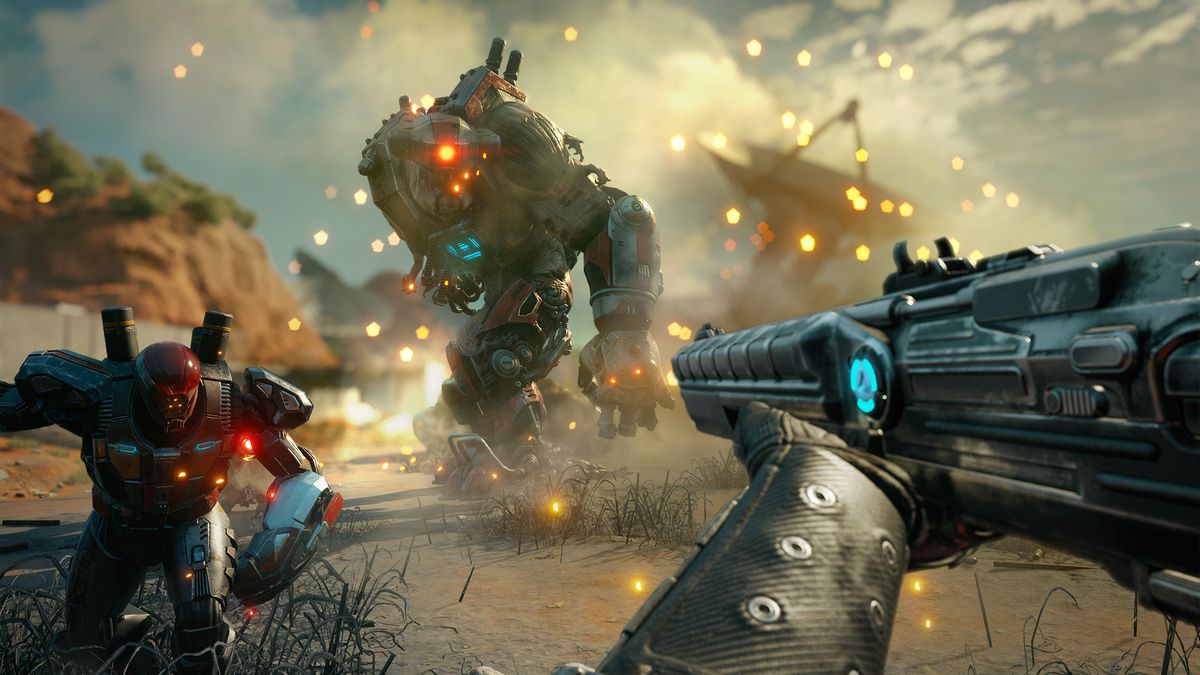 Or I can ignore each of those options completely and just use the basic weapons to pave a highway of death through the game. There is no punishment for doing so, nor is there reward for getting creative with your killing. Rage 2 gives me so many tactical options that I am sometimes overwhelmed by choice. I will go hours forgetting some of the abilities I have at my disposal.

It’s like being handed a gigantic box of tools of all shapes and sizes before being asked to replace a lightbulb. Sure, I can always build a step stool by hand before knocking the lightbulb out of the socket with a hammer, use a potato to remove the now-broken pieces of glass from the light fixture, knit a glove to keep my hand safe while I install the new lightbulb, and screw that bulb in using a custom attachment on a power drill so it goes in with a single pump of the trigger … but why wouldn’t I just stand on my tiptoes, unscrew the old bulb, and put the new one in?

If the fastest way to kill an enemy in Rage 2 is just a rocket to the head, why not do that every time? The short answer is because that’s not as fun, and Rage 2 is a ridiculously fun game once I understand how to approach its otherwise rote design. Which is to say, the best way to have fun in this world is to create my own.

Each weapons looks, feels, and sounds perfect, even before I upgrade and modify them. Using the shotgun’s secondary attack to send mutants flying through the air is fun in the first hour of the game, and it remains fun by hour 10. Sure, it’s not always effective, but it lends itself to experimentation. Can I complete an entire area by knocking enemies off high ledges, sending them to their doom below? I can certainly try!

The first Rage was so aggressively bland that it was forgotten almost as soon as it was released and now, for some reason, there is a sequel. After playing both games I have very little understanding about what makes a Rage title special, or why they exist at all, but if a series this redundant has to exist, at least the shooting itself is loud and violent and playful enough to help me forget the by-the-numbers nature of everything around it.

Rage 2 is enjoyable as long as I make the effort to do very simple things in the silliest ways possible, and game’s many systems reward this style of play more by their quality than by any extrinsic payoff. There is creativity and joy hidden here. You just have to find it beneath the pile of ideas pulled from a thousand other games.

Rage 2 was released May 14 on PlayStation 4, Windows PC, and Xbox One for $59.99. The game was reviewed on PC using a final “retail” download code provided by Warner Bros. Interactive Entertainment. You can find additional information about Polygon’s ethics policy here.