Giant monsters are cool. Colossal creatures can be an unrivalled spectacle when executed correctly, but if they’re thrown in purely to raise the stakes or surface a little too often, they can rip away from the foreboding tension survival horror is capable of at its peak. Resident Evil has been guilty of this for years, morphing humanoid figures into devilishly evil beasts with millions of limbs, poison breath, and laughably obvious weak points. It’s our job to take them down, but sometimes I wish the reality was a little more subtle.

Nearly every major boss battle in Resident Evil Village is a giant monster with telegraphed vulnerabilities Ethan Winters must focus on to win the day. Lady Dimitrescu has a tentacle-laden body sticking out of her monstrous torso, while Moreau’s humanoid presence is made obvious as it spills out of his mouth like a pale corpse. Mother Miranda is just a giant spider lady who has so many experimental phases it is almost ridiculous. The fact that you’re packing enough heat to supply a small army removes all the tension from these encounters, giving each narrative crescendo a muted tone that I quickly grew tired of.

Battles like this are fine in moderation, but when they’re constantly scattered throughout the entire campaign it all just grows predictable. Before I even started Resident Evil Village I was joking with friends that Lady Dimitrescu would appear in the game for a couple of hours before transforming into a weird demon lady – and what do you know, that’s exactly what happened. Capcom shouldn’t be going through the motions that have been normality since Resident Evil 4, the first entry to introduce larger-than-life boss battles that required a collection of rocket launchers to take down. 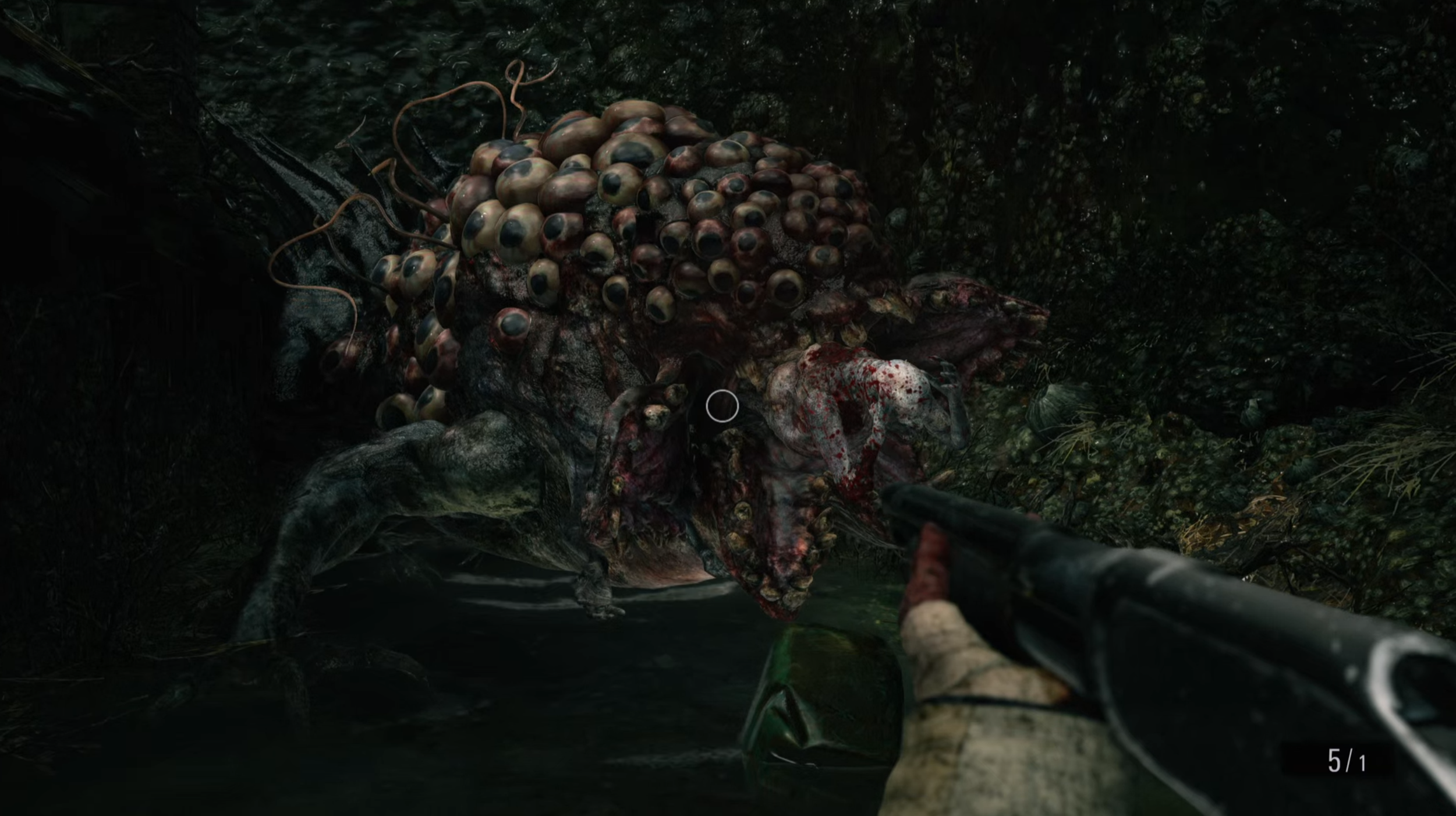 However, the fourth instalment balanced this effectively with horror, while Village opts to throw you in front of a giant slime monster and into another round of gunfights immediately afterward. There is seldom time to step back and monitor your environment for a couple of quiet minutes, a brevity that would help establish the unnerving atmosphere and hostile tone of this foreign village. Ethan Winters is a killing machine with magical hand-healing juice, so I’m surprised the Dimitrescu Family aren’t running away in fear at the mere sight of him. I certainly would, no man can have his hand chopped off that many times and keep on moving like nothing happened. Just shake it off my dude, the werewolf only took three of your fingers. That leaves you with two perfectly good ones to blow them to pieces with a shotgun.

I’ve said before that the key to survival horror sits in its subtlety, and its willingness to make us feel insecure in our surroundings as we explore a landscape that could swallow us up at any moment. We should feel jumpy, defenseless, and unaware of the threats that await us. Resident Evil 7 mastered this to a degree, the Baker Family proving to be a cabal of foes who wouldn’t reveal their true capabilities for several hours. Instead they would stalk us throughout the estate as humanoid adversaries, providing the affair with an element of realism that its successor sadly lacks. Sure, they turned into giant monsters eventually, but the payoff felt more substantial, like we’d finally unearthed what the mold was capable of and were ready to fight back. In Village, Ethan has a shotgun within the first hour, and from there it all starts to feel far less spooky. 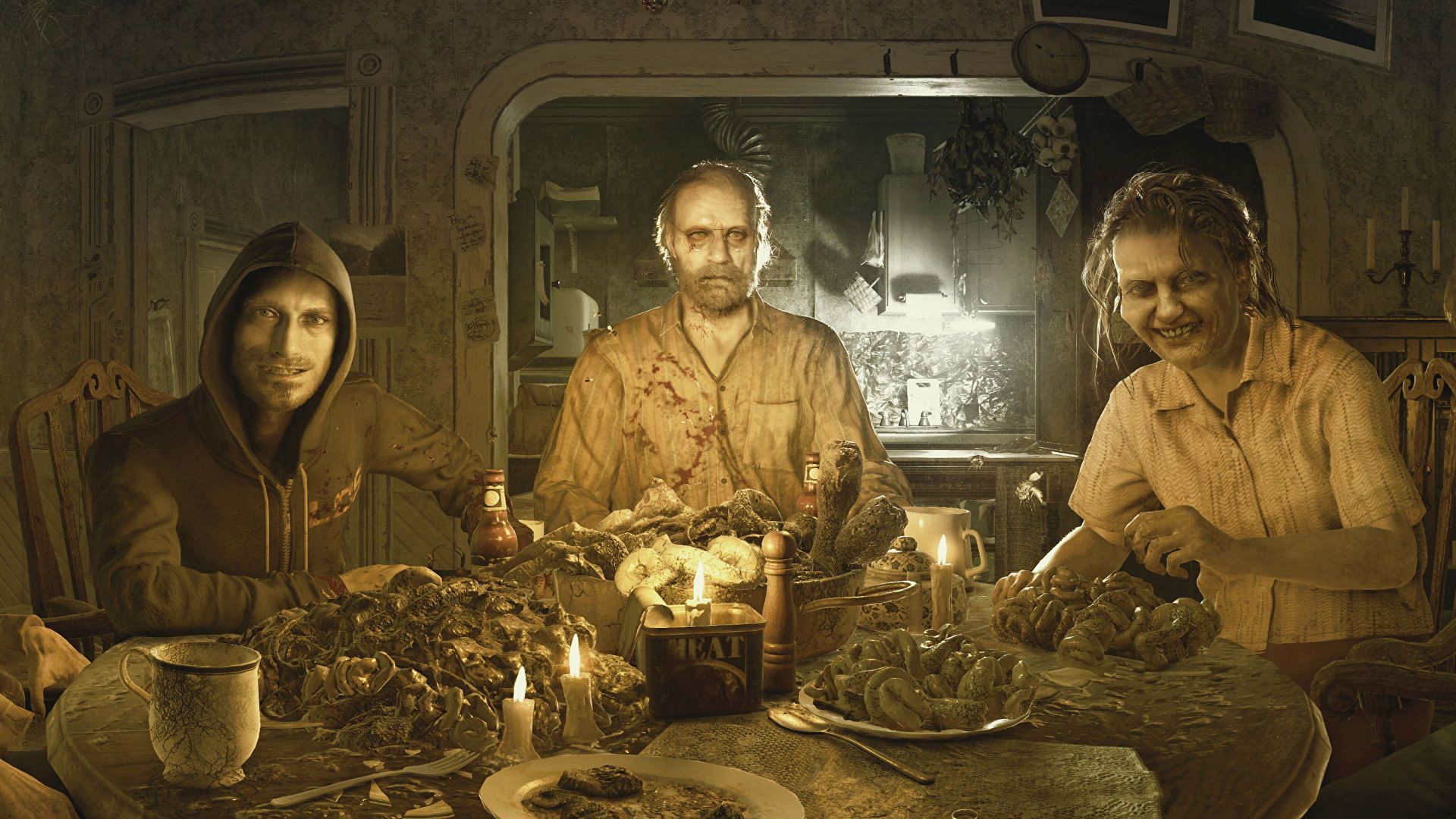 Resident Evil Village is evidently leaning into the campiness of the 2005 classic to a deliberate degree, populating the cast with a diverse range of villains each with their own distinct characteristics and motivations. Each new location is like a theme park ride with its own visual motifs and challenges to overcome. It’s exactly like Resident Evil 4 with its combination of villages, castles, and underground sewers. Sadly, it’s not nearly as effective, even if both games end up with their respective heroes going up against giant monsters.

I’d love to see Resident Evil reign itself in a little bit with future entries, forcing us to go up against threats that feel more grounded, with a human, sinister angle that makes them all the more threatening. If done effectively, survival horror can supersede boss battles altogether, allowing the act of tense exploration to do all the heavy lifting. Resident Evil 2 Remake did this to an extent, and was a masterpiece because of it. With remakes and new entries both set to arrive in the coming years as Capcom’s hot streak continues, I hope it takes some of this feedback on board.