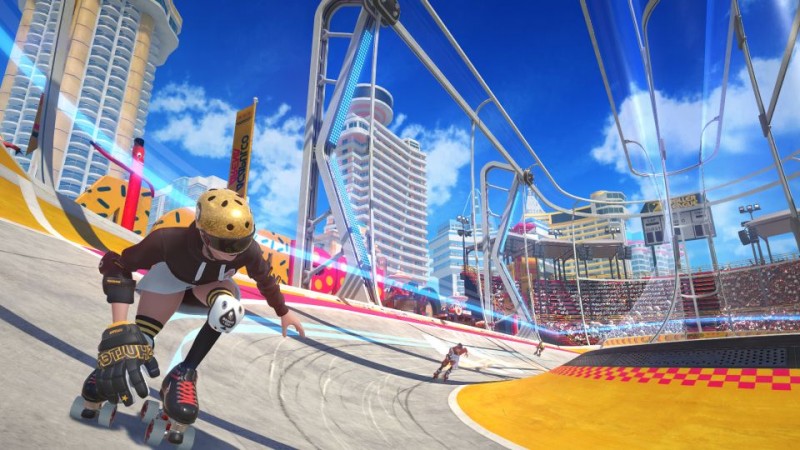 A new free-to-play arcadey sports title would not be the first game I’d think to be highlighting as a standout at E3. But after a few rounds of opponent-bashing, ball-throwing, half-pipe jumping insanity, I’m surprisingly excited to get back in and hone my skills.

Roller Champions is a made-up sport that blends elements of basketball, hockey, skateboarding, baseball, roller derby, and probably a few other experiences I’m not thinking of, and transforms them all into something new and weird. Players compete in 3v3 matches to either reach 5 points or the highest score by the time the 7 minute timer runs out, whichever comes first.

The field/pitch/ring is an oval track that is bounded on the sides by half-pipe shaped walls. After the ball is flung onto the track, the goal is for your team to grab it, and then complete at least one full lap while maintaining possession. At that point, a large circular goal brightens up with your color, which means you can throw the ball through for a point. If you manage to make it around twice (or perhaps you just missed your first shot and somehow maintained possession after the bad throw) you can get a bonus point for two laps. Finish three full laps before scoring and you score five points, enough to end the game outright.

Along the way, you and the opposing team are endlessly slamming into each other, jumping over each other, and generally making a ruckus around the track. While the ball should generally move in a designated direction around the track, the same rule does not apply to the players themselves, so one of the best strategies to block the team with possession is to turn around and come at them head on from the other direction.

The dodge and tackle button sits on the same button, and is context sensitive to whether or not you have the ball. The same is true for pass/ask for a pass (which calls for the ball from a teammate so you can show you’re open and ready to speed off). Much of the rest of the game is about managing your momentum and speed, and desperately trying to knock over the opponent players in wild flailing check moves, while simultaneously avoiding meeting the same fate at their hands. By jumping and pumping your way up and down the half pipe, you can build up tremendous speed and really slam into the enemy team’s players, or zip away with the ball after a well-timed pass from a teammate.

In the actual game as you play through, you’ll be trying to advance your character through the ranks of spectacle and fame. Rather than earn XP, your goal is to gain more fans, and as your fame grows, you’ll compete in matches with larger and larger crowds.

If I’m honest, Roller Champions only truly managed to capture my attention after I sat and played with it for a bit, at which point I really began to grasp the potential for fun. If you’re curious, Ubisoft is running an early test for the game on Uplay PC right now through June 14, so you can give it a shout and see if you feel similarly.