I jump from my perch on a roof, diving down to my target. In Sekiro: Shadows Die Twice, I am a bird of prey, and my sword is my talon.

I land on an enemy grunt, piercing him with my sword and rolling out of my attack in a seamless and deadly ballet. He never had a chance.

I turn to confront his terrified friend. I swing, but he blocks my attack with his rifle. His strength fails him after my second attack. He stands exhausted and defenseless. My next move is a one-hit-kill Deathblow. His neck sprays blood like a pierced garden hose as he falls to his knees. I feel like a shinobi god as I collect my loot and move on.

Past a large door, there’s another enemy. My adrenaline surges as I see the next few seconds of my life with absolute clarity. I sneak up behind him, run him through, and he’s gone. I am a shinobi god.

In the distance, maybe 20 yards away, two more enemies chat near a small wooden building. They can’t see me. This is going to be easy. I crouch and approach.

A bull the size of a school bus shreds the structure into a hundred shards before I can reach them. He roars and stomps and headbutts everything around him in rage. Fences and enemies fall. The music surges. He turns to me and, as he charges, I notice the flaming tubes of hay where his horns should be. I panic and turn away, running toward what I hope will be safety.

This is the joy and agony of Sekiro: Shadows Die Twice, developer FromSoftware’s new game. It’s a company known for making notoriously difficult games like the Dark Souls series and Bloodborne, and Sekiro shares that lineage. It’s full of masochistic challenges, but it’s also definitely not a Soulsborne game. It’s something new, something intriguing — and a brutal and definitive statement refuting the idea that FromSoftware is a one-trick pony.

[Ed. note: This review is based on our first 50-plus hours of Sekiro (and twice as much between us). We suspect that there may be as much ahead of us as there is in our wake. We’ll continue playing, and will update this review as we complete the game.]

I play as Wolf, a shinobi bodyguard to a royal child. I’m skilled and capable. I have a past and a place in the world.

This is a departure from what I expected based on FromSoftware’s last decade of development — games in which the stories and characters were often obscure and required deep dives into the lore to understand. The story in Sekiro is grounded in relatable details, and I know from the start how I’m connected to it: I’m trying to right a wrong from years ago and fulfill my vow as a bodyguard. The clear focus of the narrative gives me something — and someone — to care about.

There are also bad guys, monsters, and characters who all tell you, through their actions and words, what and why they are. Sekiro is immensely more narratively accessible than its Soulsborne predecessors. It’s a welcome change.

That’s not to say that Sekiro is easy or forgiving. There are bosses, and some other enemies, that kill me with one hit, even dozens of hours into the game. But there’s also a character named Hanbei the Undying who helps me hone my offensive and defensive skills. I return to him whenever I become stuck or confused, and I become a better fighter through his teaching. I usually know what to do next, although I can sometimes become confused and frustrated about how to get there.

There is no map or compass. There are no waypoints or markers. I get general directions, but I’m left to figure out how to navigate Sekiro’s branching paths and locations on my own. Sekiro lets me make mistakes, and I make a lot of mistakes. I rush blindly into an area I should move through slowly and stealthily. I wander into boss fights well before I’m prepared to handle them. I learn.

Sekiro rewards considered play. It’s not just that there’s no defined path through most areas — it’s that there are many paths, and I feel a calling to explore them all. I can run down a main street, where I’ll get stabbed by half a dozen guards, or I can head to the left, where I’ll encounter a guard dog that will alert the guards to my presence … and then I’ll get bitten and stabbed.

Or, I discover, I can use my grappling hook and take to the rooftops, where I can pick off the guards one by one until my path is clear. In the next area, when I try to repeat my rooftop trick, I meet a new type of enemy who shrugs off my attacks and stabs me to death. Sekiro forces me to find yet another way forward. 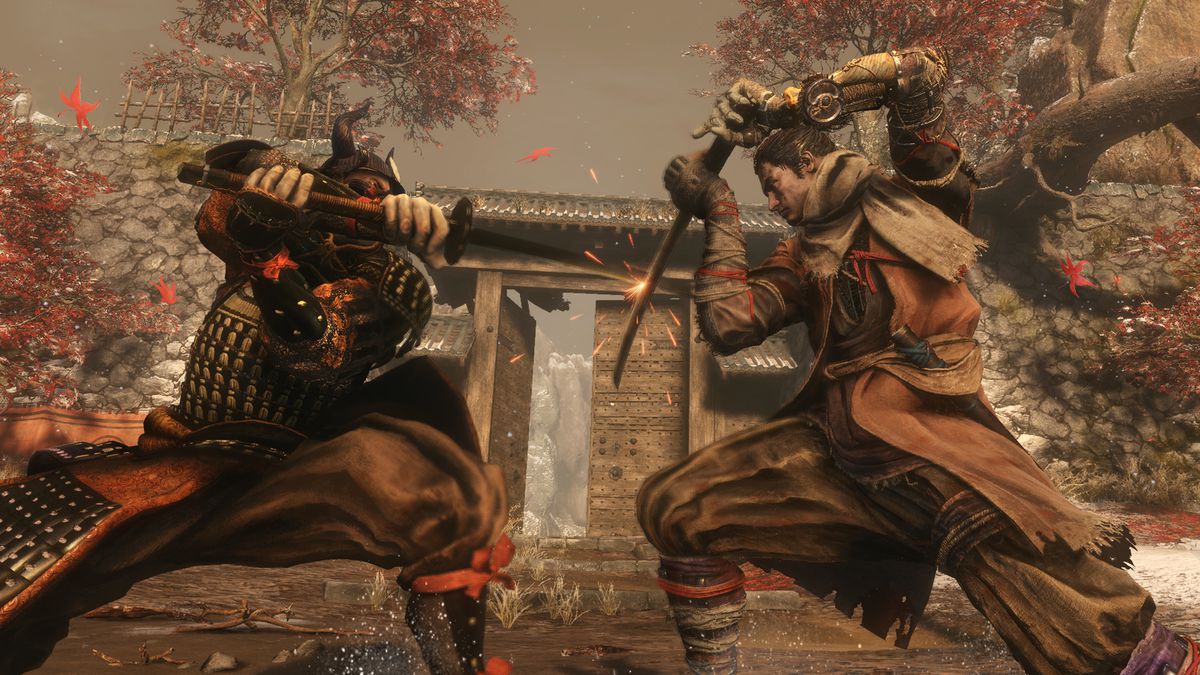 Combat is a complicated but understandable mixture of defense, dodging, and careful but relentless attacking. It’s not rhythm-based, but it punishes button mashing. Heavy defense might get me through one fight, then cost me my life in the next. Attacking aggressively lets me cut through one enemy, although the next is able to catch me off balance and destroy me. Finding the appropriate combination of thoughtfulness and brutality for each enemy and situation is essential to move ahead.

Gameplay isn’t as dire as the “Prepare to Die” promised on the first Dark Souls’ box, but that rhythm of struggling, dying, learning, and repeating is a huge part of Sekiro. It’s built into the game’s systems: I have the option of resurrection when I fall in battle. And it’s so satisfying to get trounced by someone, wait for them to turn around, and then spring back to life to stab them from behind.

The resurrection option is limited, both mechanically — I have to wait a set amount of time between uses — and through the story. A disease spreads across the world as I continually die and resurrect myself. The characters I talk to — the reformed thief turned vendor, the doctor, the grieving pilgrim — begin coughing and wheezing. And they’ll keep getting worse, unless I fix it.

Suddenly, my get-out-of-jail-free card has consequences, and I find myself questioning my use of it. Is my journey worth hurting someone else to continue, or should I accept defeat and try again with a better and more considered approach? I could save more people if I just died, but then I’d lose half of my loot and experience points. 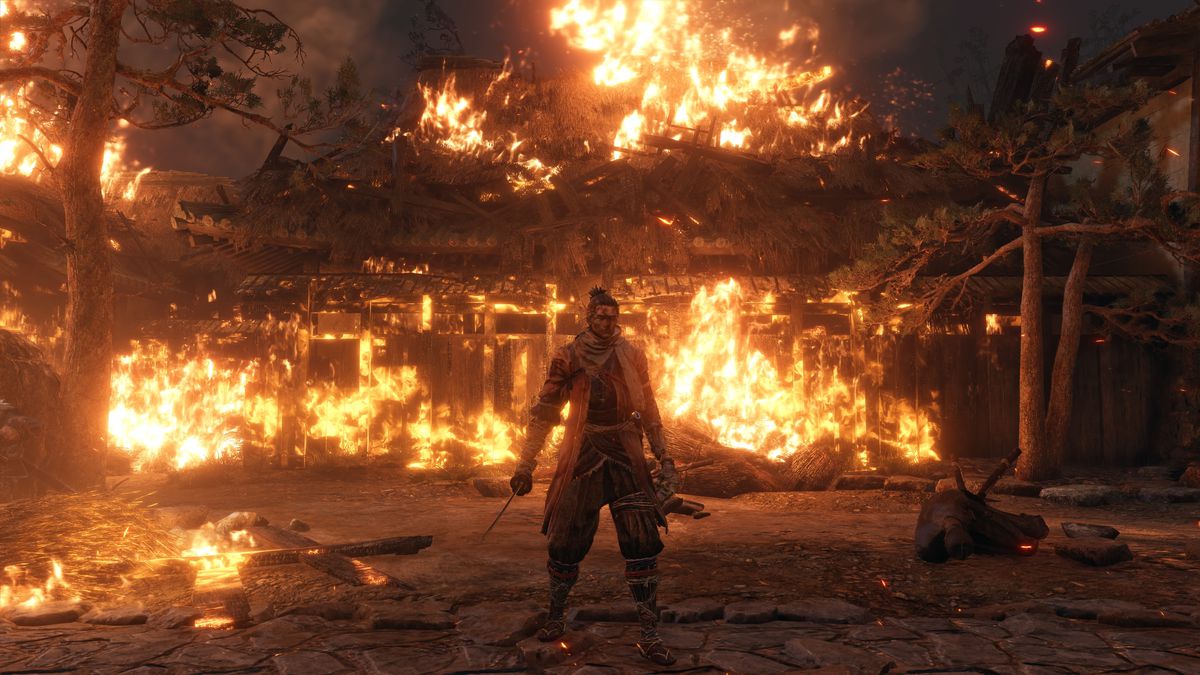 Each death is an excuse for contemplation, and I often have to take a step back to find the logic and progress that stem from my failures. They’re almost always my fault, which is how FromSoftware gets away with making absurdly punishing games. My lack of progress is a puzzle. Almost every time I fail or get stuck, I conclude that I have everything I need to solve it. I just have to think about what I’m doing or get better at executing my plans. And also I need to calm down, because all of this screaming is scaring the dog.

Rarely do my insights or incremental improvements give me anything close to an easy win, but Sekiro isn’t difficult for difficult’s sake. It gives me hints, but no roadmap. It implies. It finds ways to reward me when I read between the lines. It hands me my ass when I try something a little too clever or panicked or cheap, but it gives me victories when I act with care and react with considered split-second decisions. This is the skill that Sekiro challenges me to accumulate, and it never lets me forget that.

Even though it can take hours of controller-throwing frustration to defeat seemingly insurmountable odds, perseverance begets pleasure. I won that battle because it could be done. I solved the puzzle. I am a shinobi god.

I have to put in a lot of work and effort to meet Sekiro on its own terms, but what might feel ponderous in a lesser game becomes rewarding in one created with this much care. Sekiro meets me with just as much effort and enthusiasm as I’ve put into it. It lets me know I’m capable and skilled, and that I can figure it out.

And then it hands me my ass again.