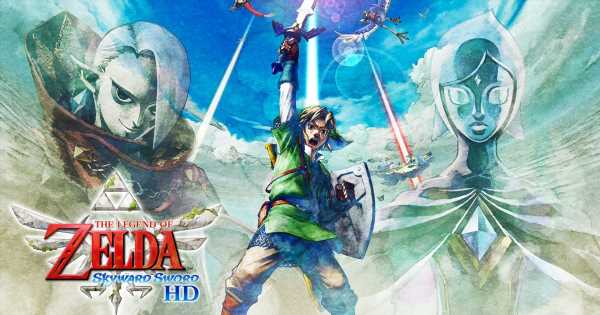 HD remakes of classic games are all the rage right now and one that will always spark hype is a Zelda game with a modern makeover.

This isn’t just any Zelda game either, this is Skyward Sword, a ten-year-old video gaming masterpiece.

It still sits on Metacritic with a whopping 93% score and is voted by many as the best Zelda game ever created by Nintendo.

But a lot has changed in a decade, and newer Switch hits like Zelda: Breath of the Wild have arguably surpassed Skyward’s greatness with modern-day game stylings.

So Nintendo needed to bring this title up to date and attack the handful of areas it got criticised originally.

It has done that here with the HD remake.

Gone is the awkward control-less camera angle that could sometimes stunt your efforts on the battlefield.

Instead we can now control our camera 360 degrees just like today’s big 3D Mario style games, and Skyward is all the better for it.

Now you can have a good look around, suss out your path ahead in the baddie-filled dungeons and get a much better sense of the wonderful world created by the original developers.

The gameplay itself is now twofold.

You can still do the old motion-controlled Wii style swordplay, that is satisfying and reacts brilliantly to the way you swish around your Joy-Con to hack at rivals.

But for those on the go with the handheld Switch, there’s now a more traditional button control play option too.

This allows you to bash away and use the twin-sticks to hack at opponents with a good level of accuracy depending on how you Street Fighter-up your button combos.

There’s also a regular autosave function, which is brilliant for the modern gamer as we’ve become used to jotting back just a few steps if we die, whereas in the past it was much longer stints between save posts within the game.

It means there’s less frustration at having to do huge sections of the game again because of a silly mistake and ultimately means you’ll focus more on the fun of the game without getting so stuck.

The title is the earliest tale in The Legend of Zelda timeline, featuring a young knight called Link who must journey between the sky and island dungeons in search of his childhood friend, Zelda.

The 60fps smoother backdrops are varied, from volcanoes to forests and deserts.

And there’s plenty of role-play chat and discovery to be found in the impressively improved graphical levels as you cut down varied monsters on your journey to stop baddie Ghirahim’s nefarious plan.

The puzzle play in the dungeons remains tough but fun and boss fights feel weighty at the end of each.

And thanks to a streamlined intro to the game you’ll be into the meat of the title a lot quicker this time, with pacy action thanks to the ability to skip cutscenes and chatter.

It’s great to see a Nintendo classic like this get a decent makeover and opens up one of the early Link efforts to a whole new fan base by weighting it in more modern gameplay standards.