Last year, EA introduced a new mode to FIFA called Volta Football. The fast-paced, streetball style of play had plenty of personality, but it was clear the mode was just getting off the ground. Now after the foundation has been set, it’s time for EA to take things to the next level. For FIFA 21, the mode is getting a lot more focus and attention, but is it enough? Here’s what we discovered after several hands-on matches and a presentation detailing EA’s vision for Volta Football.

The focus is still on keeping the experience fast and fun, but you can expect A.I. movement this year that better complements the pace and style of Volta. During my hands-on time, I noticed the A.I. made smarter decisions, blocked more effectively, and positioned themselves based on how the play was shaping up. They also had much more success at blocking shots on goal, and these blocks looked more realistic than in the past.

The new agile dribbling system EA added to FIFA 21, which we covered in detail in our previous preview, comes especially in handy here, allowing you to find ways to outsmart your opponent in these tighter spaces. Pulling off the new nutmeg mechanic, which allows you to kick the ball between the players legs to get past them, is extremely satisfying in this mode. The controls are simple, but it comes down to precise timing for success. This makes for intense one-on-one battles on the pitch, where your opponent can intercept the ball if you get too cocky.

Bringing more social elements into the mode is also a welcome change. According to EA, the mode’s number-one requested feature was the ability to play with friends, and it’s delivering on that in FIFA 21. You can now play online with up to three friends in Volta squads, or drop into the community for five-versus-five cooperative play. You can go into a public lobby or host your own private one.

This is a progression mode, where you climb the division ladder, enhance your stats, and earn rewards in weekly events. There are eight divisions, each with five ranks; you earn points depending on each win, draw, or loss, which factor into your position here. Progression is all tied to the individual; division progress will highlight your skill, while your rank will highlight your engagement. Each rank will have its own set of rewards that are determined for a weekly division event. 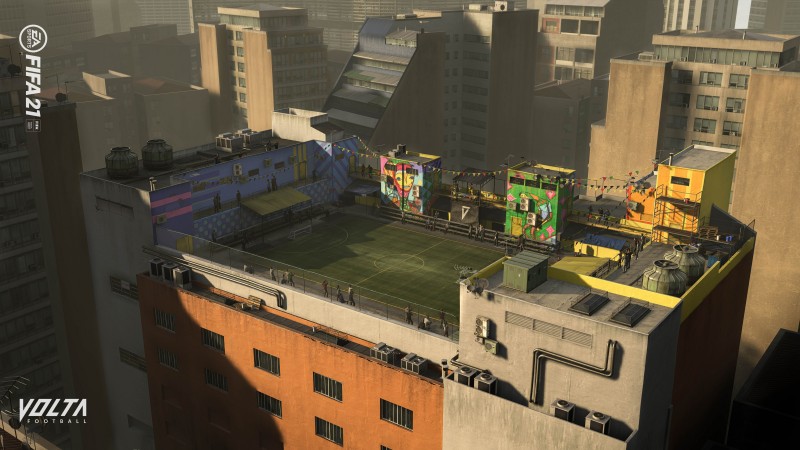 Brand-New Featured Battles Put Top Talent On Your Side

We all want to play with top-tier talent. With the new featured battles, you can build a team with the biggest names in the world of footie. Face-off against A.I.-controlled teams created by the Volta community, earning you rewards unique to this mode via weekly events.

Built on the foundation of squad battles, there are four milestones per timed event, which you complete by playing in community opponent battles. By unlocking these milestones, you open up special featured matches, like facing off against Real Madrid. If you reach all the milestones, you then unlock what EA is calling “boss battles” against stars like Mbappé and Zidane. If you win, you then recruit that star player to compete with you in featured battles or take them into online solo play to match up against friends. This will be the first time your avatar and squad can compete against real players or have them at your side. Every week you will get a notice, which details the event and how much time is left to earn a new star player or a featured team club kit.

Seeing more social elements come into this mode is nice, as you have more reasons than ever to log in. As expected, EA is also expanding on the authentic gear and styles you earn so you can customize your avatar as you see fit. We hope these continue to improve, as what we’ve seen so far was still a bit unimpressive, but we only saw early offerings from the mode in our hands-on time. Some cool things to note here, however, is that EA is creating cause-related gear to support social topics intrinsically linked to the football culture, commissioning real-world designers to help drive the direction of in-game assets to be more fashionable, and a limited set of authentic gear for avatars to support their favorite club will also be available.

Sadly, I’m a bit bummed that, while Volta Football will feature a small cinematic experience called The Debut, it’s more of a way to introduce players to the mode and its mechanics than a story-driven experience like we saw with Alex Hunter’s The Journey. Lead producer Jeff Antwi said to think of it more of an “onboarding experience” than story mode. “It is about two hours long, roughly,” he said. “You’ll learn the different match types, different gameplay styles for your players. There’s all kinds of rewards throughout as well, whether it’s gold coins or items, so you’ll be able to take all those things and composite a really cool avatar that you can take into the community and show off.”

At the very least, this mode will take you through various different stadiums, from a vibrant beachside park in Sydney, Australia to the classic streets of Paris, France. These venues will all challenge you in different ways to adapt to the landscape, and each team you play will introduce different gameplay styles, which seems like it could be an interesting way to adapt to the mode.

All-in-all, if you weren’t a Volta football fan before, I’m not sure there’s much here to change your mind, but if you saw some potential or previously liked what you played, the mode is only getting better and more engaging.