I can no longer walk past a cabaret of Hawaiian shirts and floral patterns in Primark without getting a boost of nostalgia and serotonin thanks to the likes of Far Cry and Grand Theft Auto: Vice City. The iconic tropical FPS was a huge part of my childhood, and with all the news of the sixth installment, I opted to go back to where it all began. It turns out that Far Cry still holds up, with even modern shooters struggling to hold a candle to it.

Sadly, it has been grossly overshadowed by the formulaic nature of its Ubisoft-helmed successors. The original Far Cry was an under-appreciated Crytek gem that laid the foundations for its future library, culminating in the likes of Hunt: Showdown – which has cemented itself as an underground hit. Ironically, it would appear the Far Cry series is undergoing a crisis of identity at the helm of Ubisoft. I could sit here and mock the publisher’s bland gaming palette all day long, but I’ll refrain from that and meander ever so carefully back to the point at hand: Far Cry is borderline perfect, and it’s not just the nostalgia goggles making me think that.

Far Cry came out in the same year as Half-Life 2. Graphically, it doesn’t hold a candle to Valve’s masterpiece. However, it was still leaps and bounds ahead of other contemporary shooters like Call of Duty, Fear, and Serious Sam. Visually, it certainly felt more akin to the first Half-Life, and it even shared some of its sound effects. However, Far Cry felt unbelievably modern because of its gameplay, AI, and buttery smooth movement. No wonder it was such a monumentally impressive jaunt back in the day. There was truly nothing like it. It sported vehicular combat, stealth, a semi-open world to explore, a rotunda of an arsenal. This contradicted the usual infinitely expansive backpack, an approach that became the norm not only in future Far Cry games but the FPS genre as a whole. It also sported unbelievably long-ranged fights with gunboats and snipers to pick off from afar. If the ‘90s were Quake, Doom, Wolfenstein, and Half-Life’s time to rule the shooter genre, then the new millennium belonged to Far Cry, Half-Life (again), Halo, and Call of Duty. 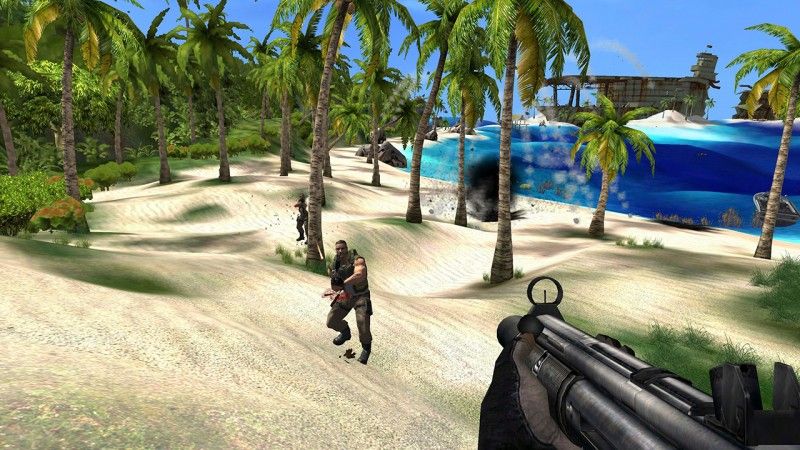 It’s striking how much detail went into every aspect of Far Cry. Something that immediately stuck out to me was how the cover system worked. You can hide behind solid objects but fragile ones like boxes are destructible, forcing you to act fast and take enemies down before it’s too late. Otherwise, you’ll find yourself in the open struggling to defend yourself. That’s par for the course, even for back then, but it didn’t stop there. There are the tents. You’re on an island in your fitting floral shirt, being bossed around by evil mercenaries, but there’s an armada of army tents and occupied facilities. Go into the tents for a breather to hide and recuperate and you’ll find that cloth isn’t good protection. Bullets go right through it. It makes sense, but it also makes you think about how and where to find cover, and it pushes you to decide whether the risk of a fight is work taking or if you should approach things with a more stealthy mindset.

Then there’s the AI. Enemies would fight you in groups, so you’d constantly encounter bands of military thugs vying for your interloper blood. These matchups of masculinity can be arduous if you’re not careful, but there’s another layer found in the programming behind these foes. While you’re busy mowing down baddies and mad scientists, one or two might splinter off to get help. If you fail to keep them from escaping, the backup will seep in through the open orifice you’ve left exposed. With that, the fight continues, you lose more ammo, and your health slowly drains away. You’re forced to think tactically, be mindful of how you take on larger swaths of enemies, as opposed to the typical approach at that time which was to waltz into an arena, gun down everyone, and move onto the next.

Even Half-Life is guilty of this level design, helping Far Cry feel complex in a way that many of its cohorts didn’t. Alarms and other means to alert others meant you were constantly on the lookout for those that are more interested in finding assistance than killing you outright. Far Cry helped pioneer a style of first-person stealth that has stood the test of time remarkably, both in its sequels and across the wider medium. Often, I’d simply circumnavigate the buzzing hive of henchmen to complete the objective before nicking a car and swerving out because there were simply too many alarms, too many potential avenues for baddies to get backup, and too little cover to hold my own. It’s as much about your approach as it is about the actual fights themselves. 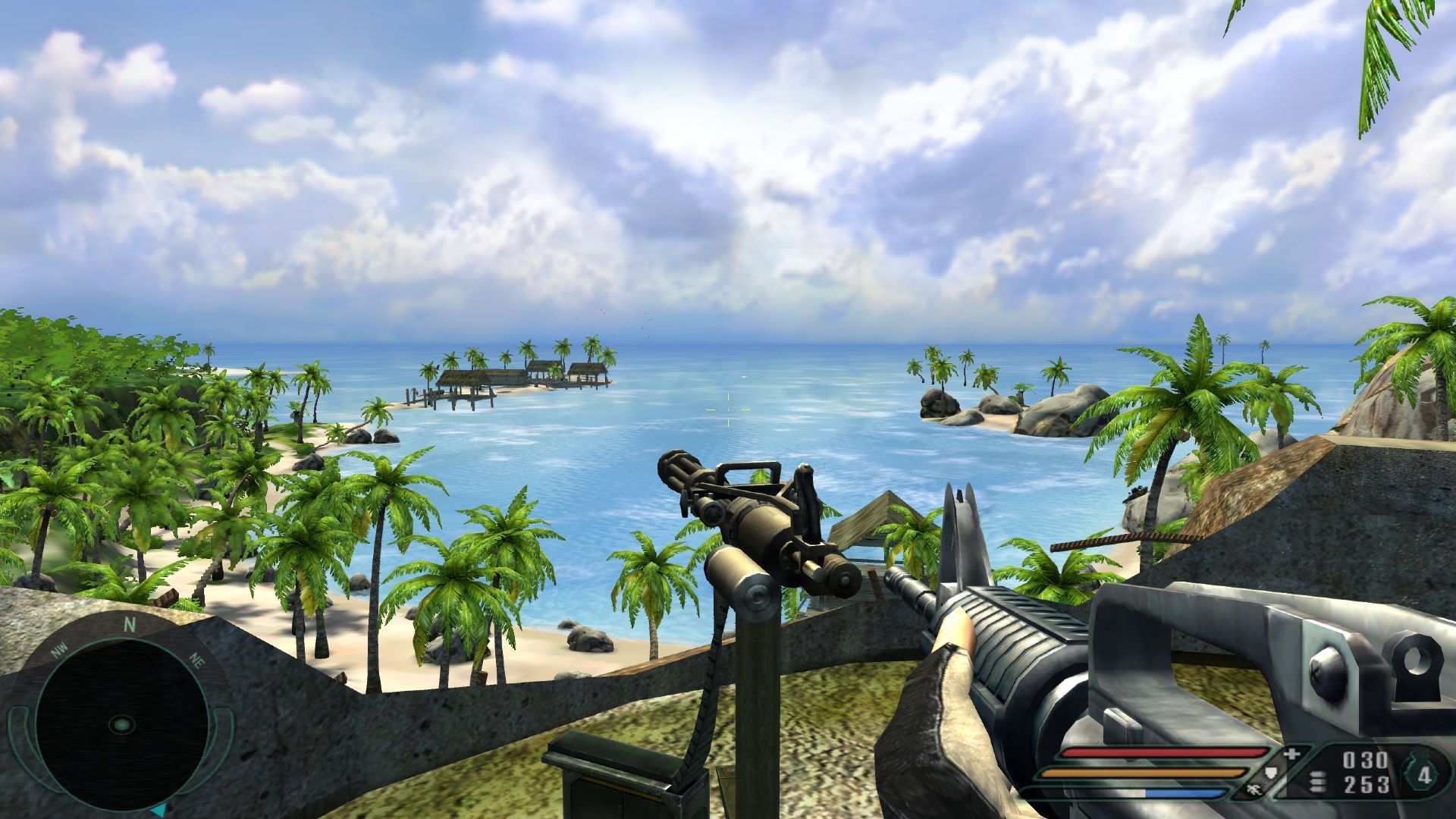 It’s important to note the context of that era of the FPS genre. Doom and Quake were arcade-like shooters with armor placed outright as big icons, health as med packs just scattered around, and enemies placed like cardboard cut-outs in a firing range. It was never intended to feel like a living, breathing world – just a series of rooms you’d walk through to kill demons and slaughter the undead. Half-Life ushered in a more seamless approach that made the space you explored feel more alive and natural while paving the way for more story-driven shooters.

Halo expanded upon that idea, revolutionizing the genre once more, and Far Cry catapulted it into the stratosphere. It’s not recognized for that impact to the extent it should be, but everything was far more interactive, and compared to the likes of Quake and Doom, it was a significant leap in the same way Halo was. Yet Far Cry has fallen to the wayside, fading into obscurity despite still holding a gargantuan slice of the pie today. Half-Life had trams and what-not, but they were all on rails, whereas Far Cry had you driving around in cars and trucks amidst a semi-open sandbox with a dot on your minimap telling you where to go when you’d had enough of the shooting and looting. In that regard, it felt even more ‘real’ and tangible than Half-Life ever did.

It was a product of its time that kept all the charm and retro angst you’d expect, but it was also forward-thinking, with high-octane gunfights in tight-knit yet open levels. It’s difficult and punishing yet fair. The multiplayer added a whole new layer that kept me coming back for years to play with my brother, even in the advent of Counter-Strike and Team Fortress. It did so much right, and yet it’s been forgotten because of what Far Cry has become, because of how different it is now, because of the new legacy and identity that it has formed. Look at the original in isolation, as Crytek dipping its toes into the oversaturated FPS genre of the early 2000s, and what you’ll find is a near-perfect gem that’s absolutely worth your time. It holds up, and it’s still standing tall as one of the best.