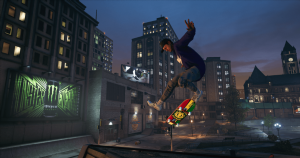 Skateboarding fans of these two classic games can now buy them all jazzed up for the Switch in a two-game bundle.

And the HD remake of both Playstation 1 classics is excellent.

It’s a faithful remaster of the era-defining games that put the sport firmly on the video console map back in 1999 and 2000.

It was a time of American Pie movies and Blink 182 US pop punk.

And you’re immediately transported back to that era when you load up the double title on Nintendo’s handheld console.

The audio tracks were so important to these games and they still sound surprisingly fresh, thanks in great part to a sprinkling of new songs to give this re-release a slightly more modern vibe.

The game itself plays beautifully on the twin-stick Joy-Cons.

After a few simple tutorials you’ll be throwing your digital skateboarder all over the park like a pro, pulling off rail grinds, jump tricks, wall plants, lip tricks and ollis.

There are new tricks added in, which is a nice surprise to those who played these games endlessly before.

And they’ve added in some of the most preeminent pro skaters in the world today to the lineup of original skaters – people like Nyjah Huston, Leo Baker, Leticia Bufoni, Aori Nishimura, Lizzie Armanto, Shane O’Neill, Riley Hawk and Tyshawn Jones.

The graphics have had an impressive overhaul, with silky smooth HD animations that make your skating action feel effortless and raises a smile.

Create-A-Park and Create-A-Skater modes are back with a robust new editor that allows customisation on a level not seen before.

Players are able to share new parks online with friends, remix already published parks with their own personal flavour, and outfit skaters with tons of new boards and outfits.

Overall, the game itself plays very much like before.

But with the added extras and better visuals the package as a whole is fantastic value for gamers who have never tried a Tony Hawk game before and will be very appealing to those old school players who want to step back in with their on-the-go handheld.