In The Surge 2, my navigation skills keep me from wasting hours of time traveling through the twisted, open map. Playing MapQuest inside this third-person action RPG keeps the methodical combat from feeling too bland too quickly. It seems like a weird thing to say about a modern game, but The Surge 2’s multi-layered and evolving world keeps me interested, even when the rest of the game starts to get boring.

What is The Surge 2?

Like 2017’s The Surge, The Surge 2 is a third-person, violent romp through a sci-fi setting, a fresh idea for a not-so-fresh genre. I activate checkpoints, unlock shortcuts, battle enemies, and gain currency for my victories. Death comes swiftly and often, and if I can’t get back to my corpse without dying (or before The Surge 2’s timer ticks down) my previous life’s hard earned currency disappears for good.

But The Surge 2 keeps things unique with its dismemberment system, like The Surge before it. As I battle, I target different parts of the body. Taking on an unarmored limb of the enemy yields the most damage, but ruins my ability to steal enemy armor for my own uses.

Instead, I go for the helmets, the leg plating, the body armor, the metal gauntlets. After whittling down an enemy gauntlet’s defenses, I execute a finishing move. My custom character shoves her spear under my enemy’s arm and does a kickflip off their chest. The arm comes with her, and the enemy falls to the ground.

The arm — as well as the weapon it’s holding and the armor around it — is mine now. I can take that armor to any Med Bay to create a piece that fits my character. What was theirs is now mine. Each enemy comes with this same kind of interaction, and I always opt to cut rather than take the easy way out with an unarmored piece of gear.

As I look to upgrade the loot I already have, I’m forced to focus on different body parts. I need to upgrade my chest, so I better start dismembering the chests of my enemies — often by using my spear as a pole to help me crane kick an enemy torso so hard it separates from the rest of the limbs. Choosing a body part to focus on is a fun mini-game to play, and means you can usually get something useful from each enemy you take out. Need a better helmet? Better start decapitating everyone you come across.

This dismember, acquire, and upgrade loop is a solid identity for The Surge 2 to maintain from the original. But maintenance isn’t the most appealing idea when it comes to a full fledged sequel.

The Surge 2’s only major combat improvement is the directional parry system, where the well-timed flick of the thumb stick ruins an enemy attack and opens them up for a serious counter. Other than my parries and flashy animations, The Surge 2’s gameplay didn’t keep me engaged — despite enjoying The Surge two years ago. 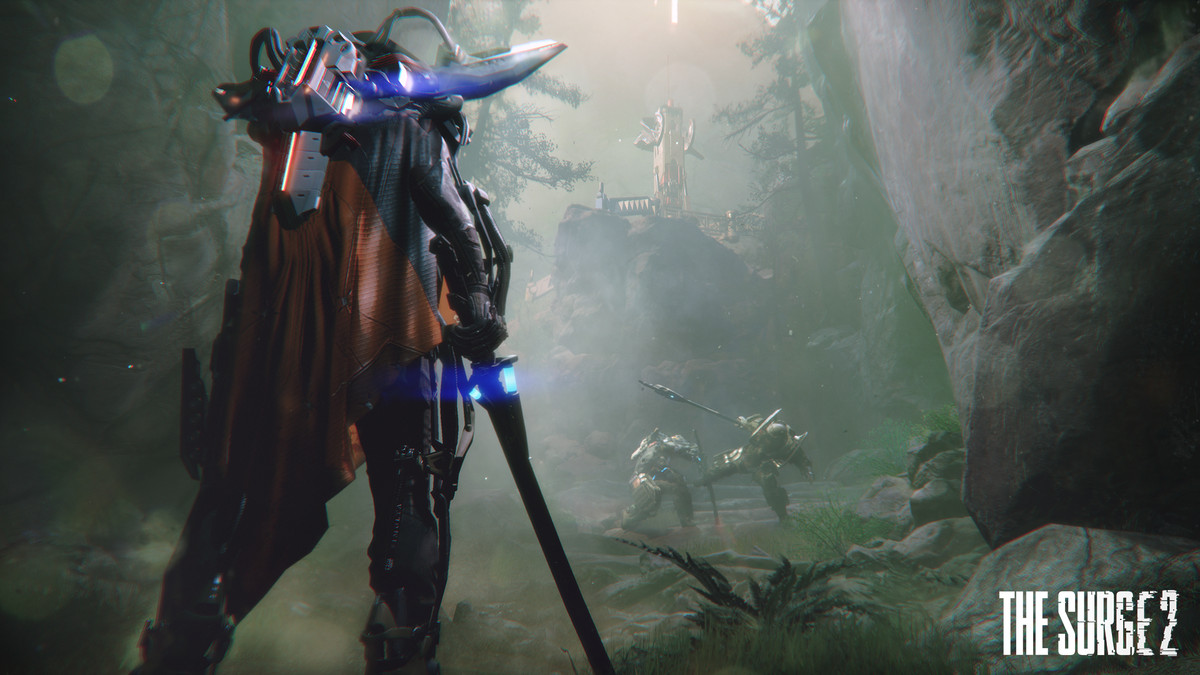 But The Surge 2’s map design saves it from sequel syndrome.

The gameplay immediately feels familiar as I begin to play, and I pick up the basics almost instantly. My movements and attacks spend stamina, just as the hits I take whittle down my health. I can upgrade both, but I have to survive and reach a nearby checkpoint to use the currency I get from enemies.

After another death, I spawn again at my local Med Bay — a futuristic bonfire that acts as an upgrade station to spend my currency and my checkpoint when I fail. I’ve been fighting through the same location for what seems like hours; encountering new enemies, vanquishing some, and dying to others. Progress is never guaranteed, but each new step forward unlocks a new shortcut for me to take, one that makes getting back to where I was that much easier.

It’s as if the world is always ready to fold back in on itself. Making forward progress always feels like a hard-fought battle, but returning from where I came is always one clever shortcut, suddenly available, away.

I follow my path, dispensing with my foes without much thought, before jumping back into the arena I’ve been puzzling out for the last 20 minutes. There’s no boss here to hinder me, just a few new enemies giving me trouble. Each bad guy could kill me on their own if I’m not careful, and trying to take on two at once is a death sentence. As I survey the battlefield, riddled with memories of deaths I should’ve prevented, I start to contemplate my path.

An entrance through the front gate lets me take on the hardest enemies first, but makes it harder to take them one enemy at a time — not to mention the alarm that will alert all nearby enemies of my presence if I’m not careful. My usual entrance from the top of a bus, past the gate, is the stealthiest choice, but sandwiches me between two tough guards and a hostile robot.

I go through the bus to take the robot out first. After a few good hits, I take one of its arms off before dealing my final blows to its chassis. Now I just need to decide how I want to approach the enemies in front of the gate.

I spend most of my time in The Surge 2 analyzing these kinds of combat puzzles, made possible by the game’s claustrophobic world. In the 15 hours it took me to beat The Surge 2, the gameplay rarely changed, and was so reminiscent of the first game that it felt more like an expansion than a sequel. But the map around me changed completely over time, and that ended up being the addition to the formula that kept me playing, even if so much of the rest of the game’s design began to feel rote.

It’s that shifting map that really makes The Surge 2 shine.

The 3D Chess board 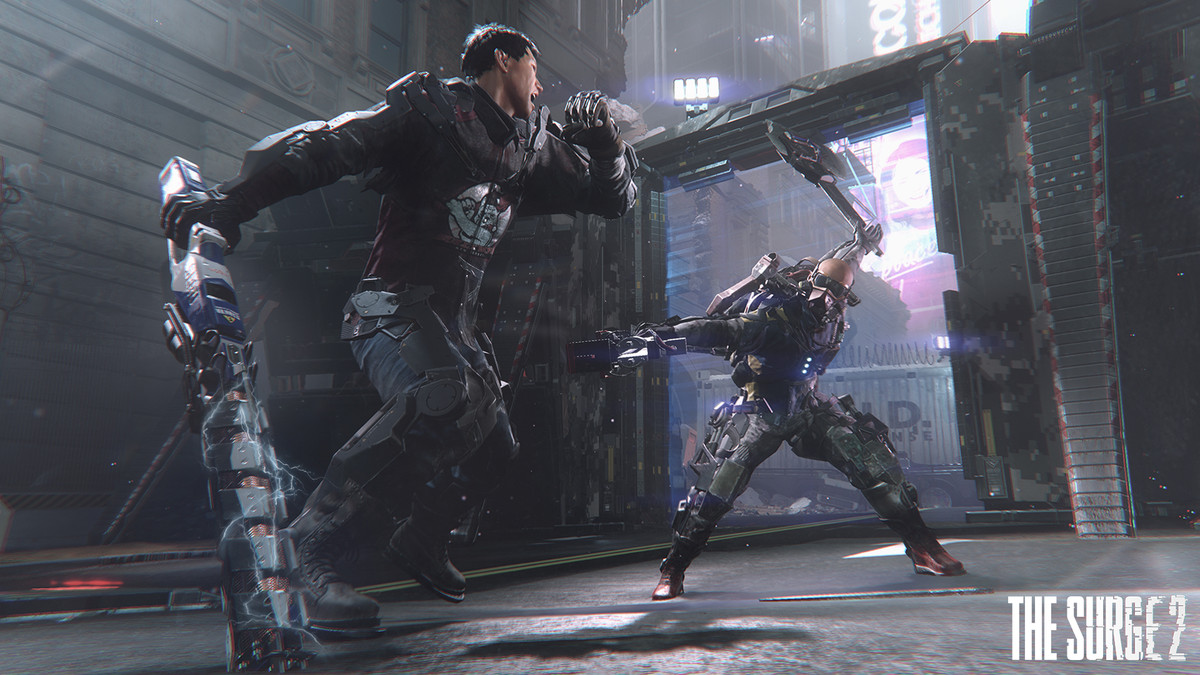 I spend most of my time in The Surge 2 fighting through the hub world — a future city in disrepair. I use elevators to climb to new floors and zip lines to speed from one landing to another.

Each new room I find likely has multiple exits, and checking off the boxes of each new path rewards me with treasure or a new shortcut to a Med Bay. The in-game map is non-existent, replaced with map billboards, which display my location, strewn about the world. At times I reach for a map key on my controller that isn’t there, but the obfuscated map ultimately adds to the charm of maneuvering around. I don’t get to look inward at a menu to navigate, I have to constantly look out into the world to figure out where I am and where I’m going.

There are quests that take me through singular areas like a forest biome or the local harbor— each with their own spiraled shortcuts — but I spend the interim battling new enemies and making my own mental map of the world. The map is small, which makes crossing it quick and easy. And by five hours, I know my way around each and every street.

My familiarity with the world is what makes the mid-game change so fun to experience. After a few major quests, I reach a point of no return in the story. Before I enter the next area, I get a warning that things won’t be the same when I return. Naturally, I press on. A kind of cataclysm happens in the story, and a new force gains a foothold in the city I’ve been playing in for hours. I fight a quick boss, and re-emerge to see how this faction has already started to evolve the world. 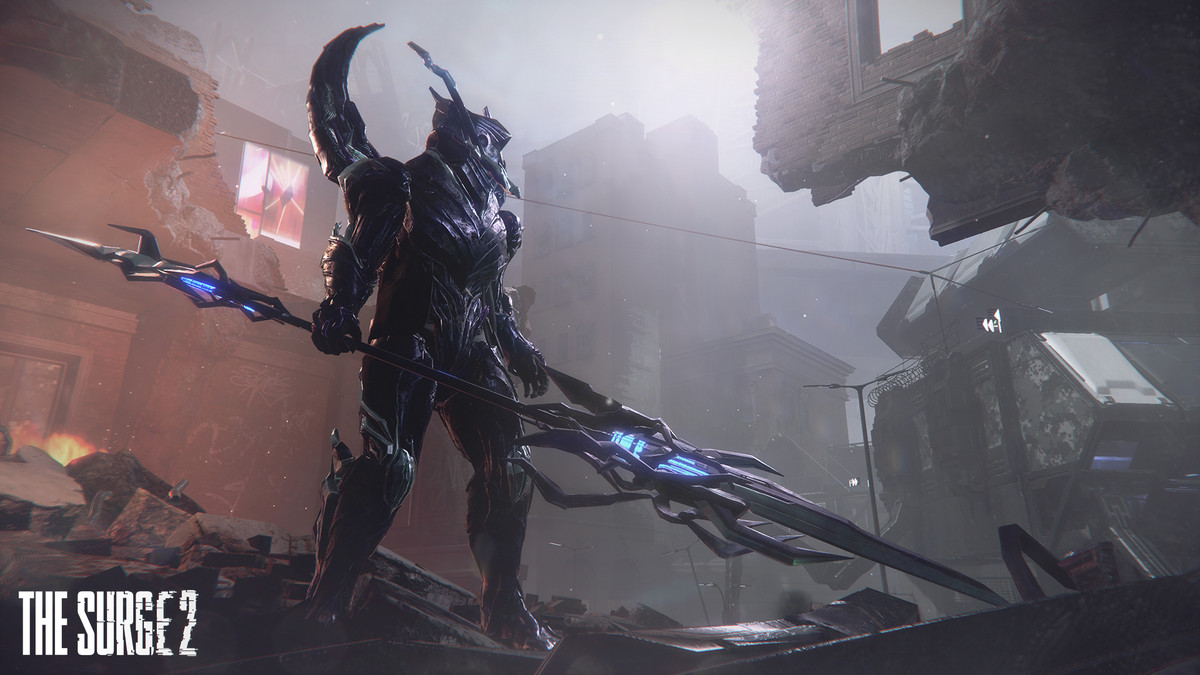 What I find is a map completely remixed, but not one that I don’t recognize. The situation destroyed some buildings and walls, tunnels with new paths have emerged, and new enemies fill the old landscape. What was old is new again, but in a way that’s still recognizable.

Some of my old paths are gone, but new options are open to explore. I travel around the world that I once knew so well without much understanding of where I’m going. Sometimes I get lost, and consider turning back. But pressing on always reveals a landmark I didn’t know I was near, or a location I recognize.

Suddenly a remixed version of the map starts forming in my mind, with locations I know so well fitting neatly into new locals. Each new discovery of an old area leaves me feeling like a kid again, stuck in the backseat during a long car ride only to emerge and shout, “hey, I know where we are,” the moment I recognize a landmark. This realization always comes right as the combat starts to feel too familiar and begins to bore.

Familiar isn’t always bad, and in the case of The Surge 2, familiar is just aggressively fine. Adding cinnamon to oatmeal doesn’t create a flavor explosion, but it makes the experience that much more pleasant. With The Surge 2, the folded world map is that cinnamon, adding just enough flavor to keep me interested the whole way through.

The Surge 2 will be released Sept. 24 on PlayStation 4, Windows PC via Steam, and Xbox One. The game was reviewed using a final “retail” Steam download code provided by Evolve for Focus Home Interactive. You can find additional information about Polygon’s ethics policy here.