The Witcher is one of those series that not only has expansive lore when it comes to monsters and magic but also deals with politics and race relations. So you have to accept that most of the early episodes are going to be spent explaining bits of history and introducing characters, meaning that it’s going to take a little while for this show to start moving towards its actual plot.

Thus, we get episode 2, “Four Marks”, which does a lot of heavy lifting concerning the world’s lore. Not only do we finally meet the third main cast member, Yennefer of Vengerberg, but we also learn about magic and the plight of the elf race. It’s a lot to take in, and as a result, the episode suffers a bit from being stuffed to the gills with exposition after exposition. 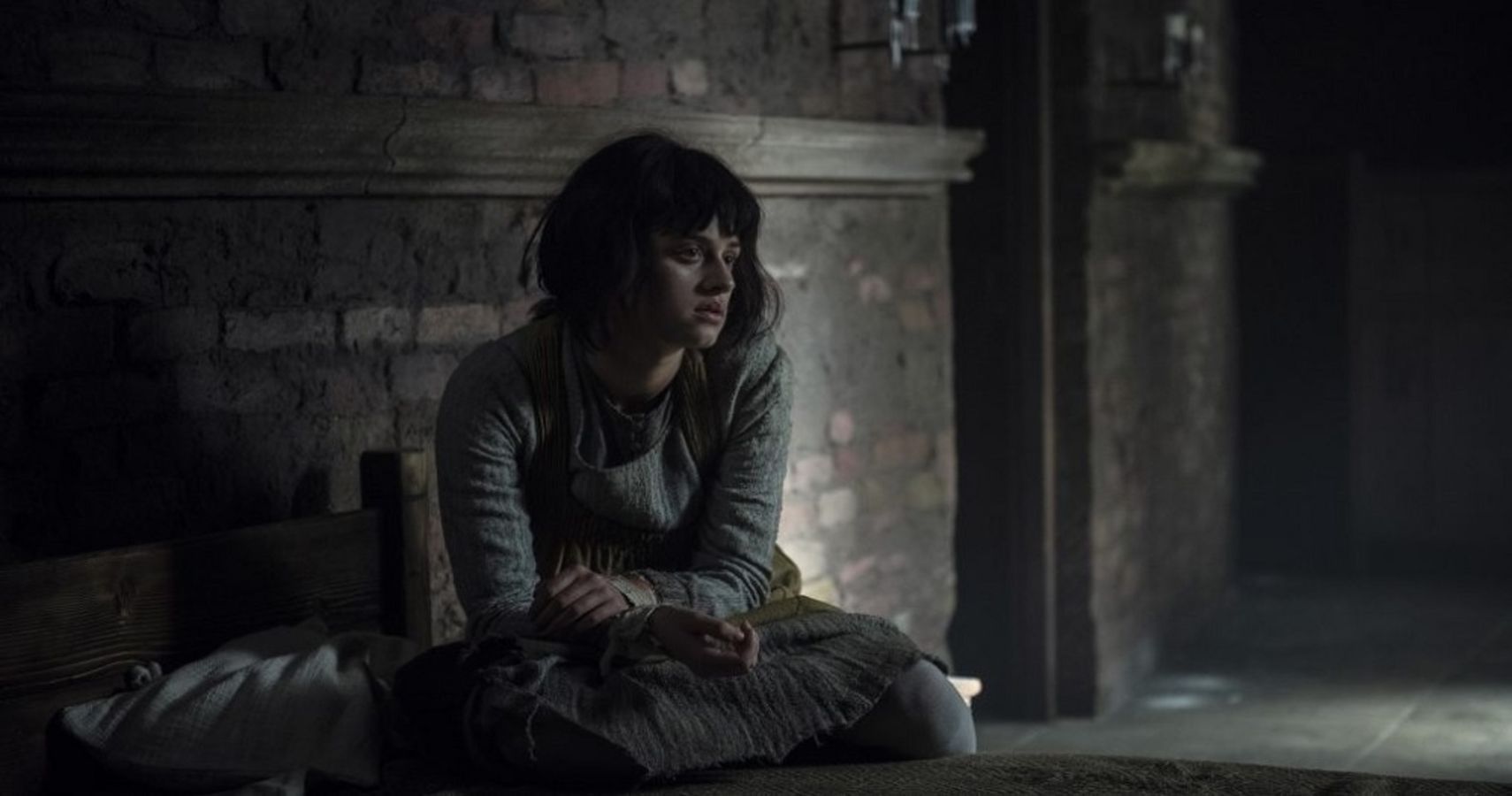 When we first meet Yennefer, she’s a deformed farm girl with a hunchback and a malformed jaw. She gets assaulted by two nasty townsfolk, and her distress causes her to accidentally open up a portal to a distant location using her latent magical abilities. Due to this unintentional use of magic, it alerts her existence to Tissaia de Vries, who’s kind of like a snooty, female version of Dumbledore.

From there we learn about magic and the episode fast-forwards through Yennefer’s training. She has the standard issues when she can’t grasp things as quickly as the other girls at the school, which usually leads to her running out of the room in tears. This all culminates with Tissaia making the girls literally catch lightning in a bottle as a kind of final exam, and while Yennefer doesn’t succeed, she’s able to channel the lightning through her arm, firing it at Tissaia after she lets loose another insult. Now if I was running this school this would be grounds for immediate expulsion, but since this is a TV show, it seems to earn Yen some extra credit. It’s the equivalent of a scene in any Dead Poets Society-esque film where the student stands up to the teacher and passes the “real test.”

I was fairly unimpressed with this part of the episode. “Four Marks” doesn’t give us a good sense of who this character is supposed to be. The sad common girl who wishes for better things and through random chance is hurried away to a life of adventure and privilege is a standard trope. All I know about her right now is that she’s sad, she wants to be pretty and she cries a lot. Anya Chalotra isn’t really given a lot to work with so I don’t blame her for this dull storyline, but so far Yennefer’s origin reads like something out of a generic young adult novel. Hopefully, Yennefer will be given more interesting things to do in the near future.

Toss A Coin To Your Witcher 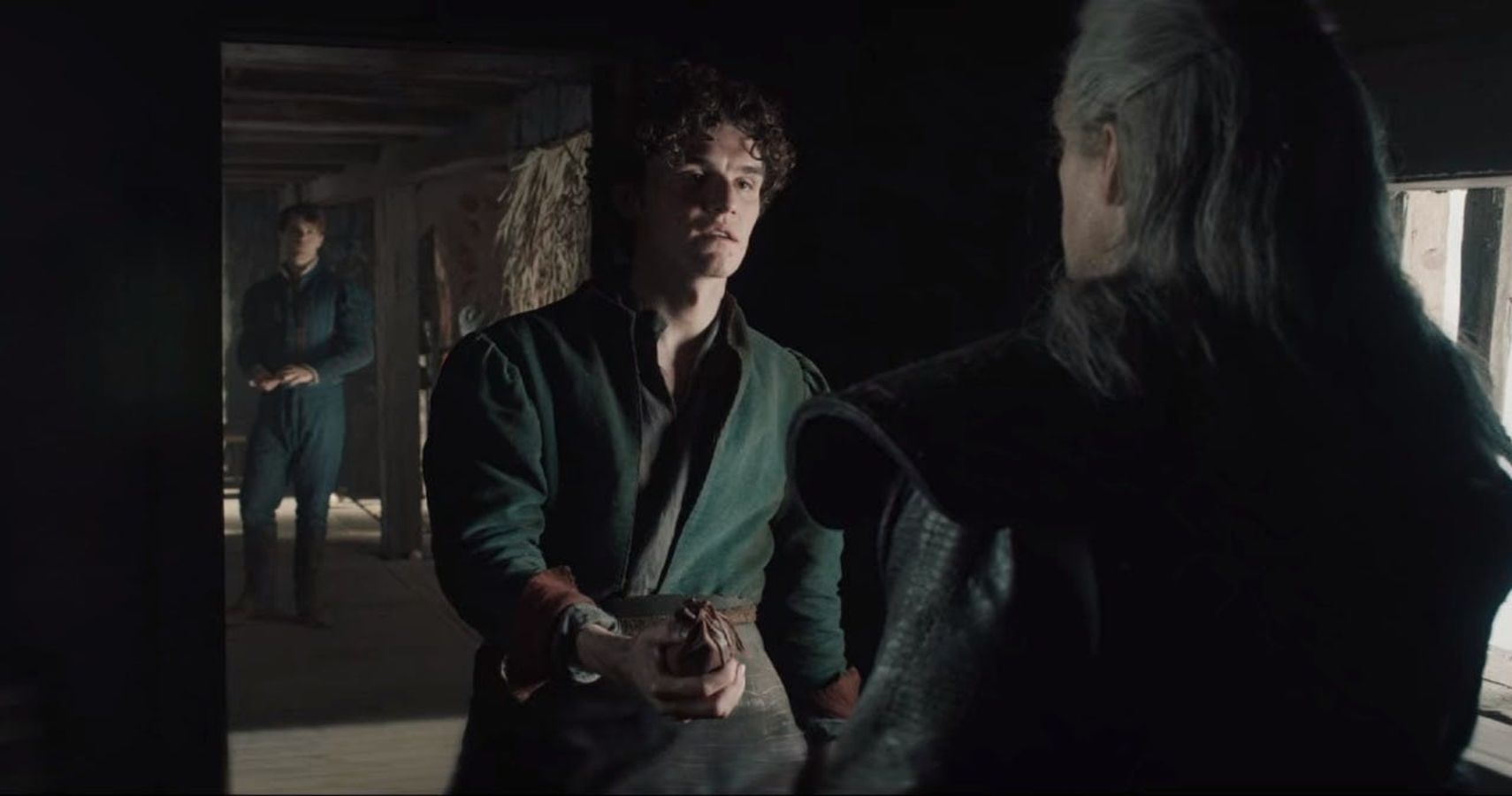 Geralt’s storyline also introduces a new character from The Witcher mythology. We meet Jaskier the bard, who you may know better as Dandelion from the games. As he’s getting booed in a local tavern, Geralt is having a sad, lonely, brooding drink in the corner of the bar. Jaskier bothers him enough to make him leave, but on his way out he’s given a job by a farmer to stop a supposed “devil” from stealing grain, and Jaskier decides to tag along to get material for a new song.

However, it turns out that it’s not a devil. It’s actually someone named Torque who’s a “sylvan”, an intelligent, horned creature that’s been stealing the grain to help destitute elves living out in the wilderness. I like that The Witcher is just showing us new creatures every week as it helps establish that this show is even higher fantasy than something like Game Of Thrones that only throws out a dragon or ice zombie here and there.

After confronting Torque, Jaskier and Geralt are knocked out by rocks and kidnapped. When they wake up, they’re in the presence of the elf king Filavandrel, who looks pretty rustic despite his flowing blonde locks. It’s here that we get a big lore dump about elves. Humans have been taught that elves left to go live in fancy palaces up in the mountains, but what really happened was that elves helped the humans by teaching them how to survive and use magic. Soon after, they immediately betrayed them and stole their land leaving the elves homeless and reviled by everyone. It’s becoming very apparent that the show’s central thesis is that “mankind is the greatest monster of all”, which might be true, but is a tad on the nose as a theme.

Geralt offers up advice to the elves that’s identical to the advice he gave Renfi in episode 1: Leave, find a new home, and move on with your lives. It seems like running away from your problems is going to be one of Geralt’s main personality traits. In the end, Geralt hands over the money he was given to catch the grain thief to Filvandrel and company, and they let him and Jaskier go. Jaskier seems all too happy with the adventure as he got inspiration for a new song dedicated to Geralt, which unsurprisingly embellishes the details a bit, but it’s pretty dang catchy so that’s ok. I’d say this was the best part of “Four Marks”, although I’m starting to think that Geralt’s scenes are always going to be the highlight as I often can’t wait to get back to him after spending time with Ciri or Yennefer.

And Who Could Forget Dear Rat Boy? 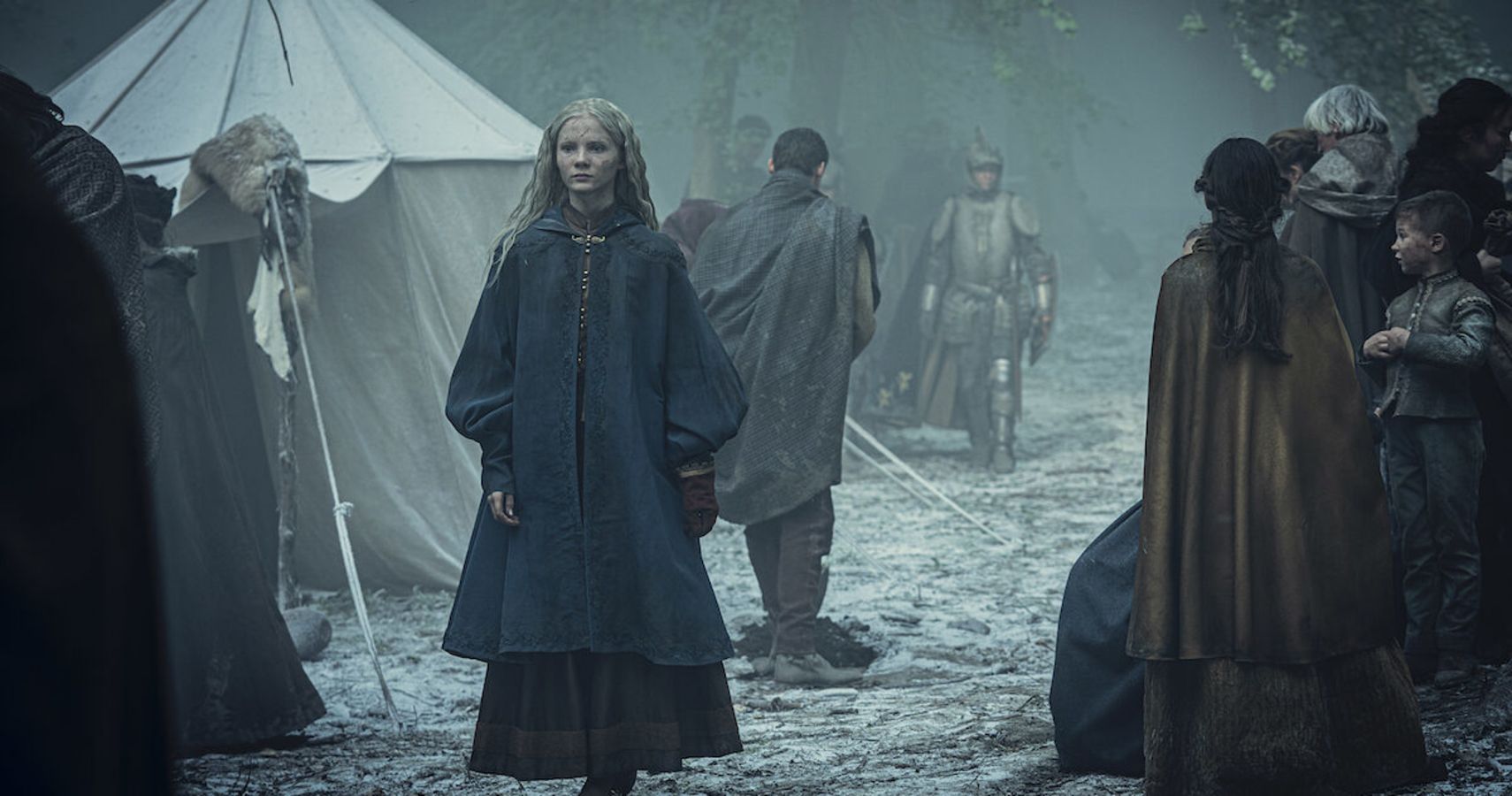 Finally, we have Ciri’s storyline, which is pretty slight. She’s been on the run since Cintra was attacked, and has somehow survived in the woods on her own for 3 days. After almost eating some poisonous berries – which makes me wonder how she survived for 3 days with little to no survival skills – she meets a mute boy who we initially only know as Rat Boy, a moniker he gains due to his penchant for eating cooked rats.

Ciri stumbles across a camp of Cintra refugees left stranded after the Nilfgaard attack, and there’s a lovely moment where her privilege gets checked when she tries to butt in front of a soup line. She then meets a rather awful upper-class woman who takes her in while simultaneously bad-mouthing the deceased Queen Calanthe. Eventually, this camp is raided by Nilfgaard soldiers and Ciri is saved by Rat Boy, who we soon find out is an elf himself named Dara, continuing the running theme of this episode, which is that elves are good and humans suck.

An Explosion Of Exposition 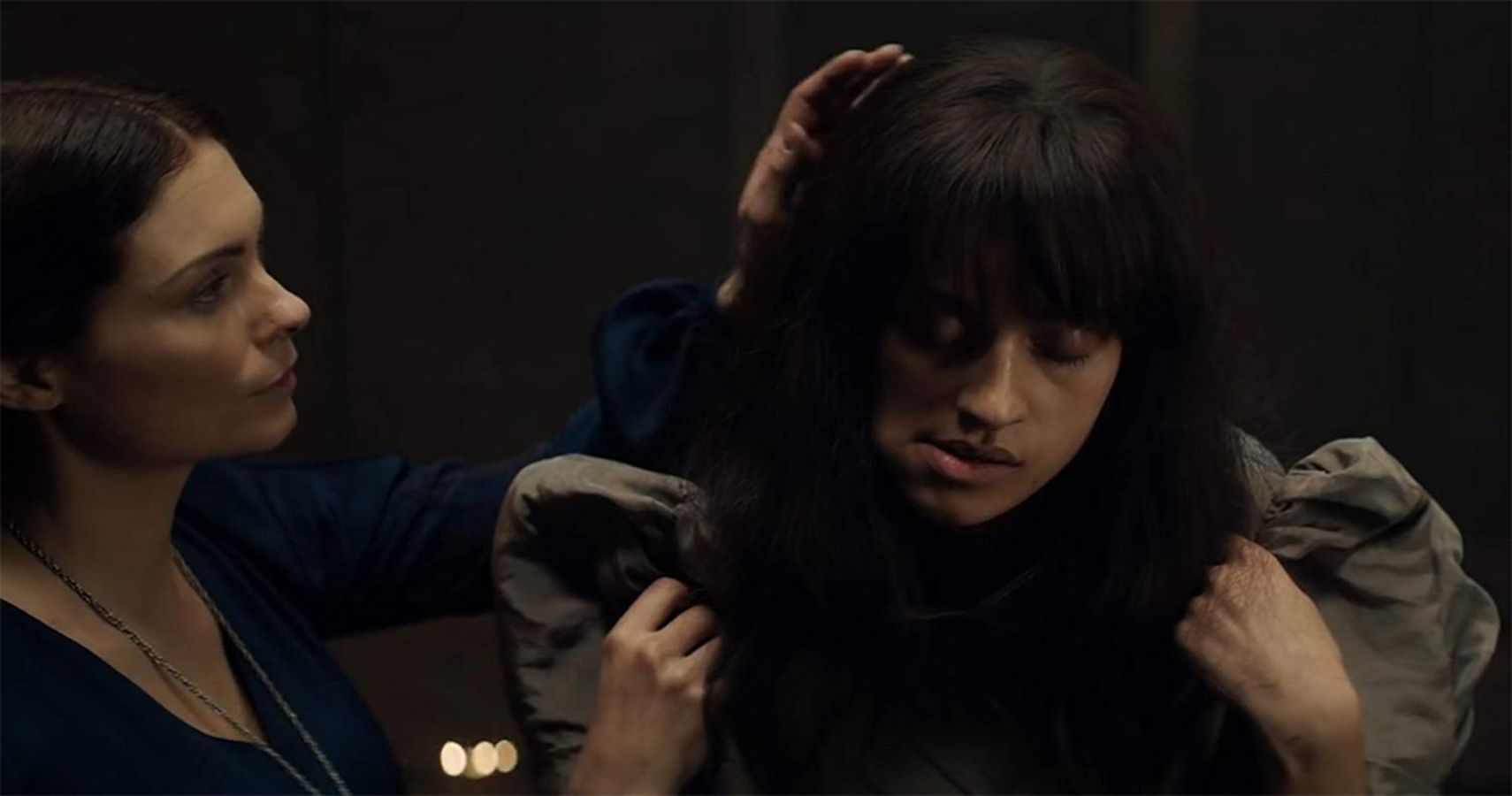 As an episode, “Four Marks” doesn’t really hit the spot, and it’s mostly there to sit us down and tell us about the state of the world.  We find out a lot about the elves, as well as a reference to the Conjunction Of The Spheres. We meet Yen, although I was left cold by her introduction due to its cliches and predictability – except for the magic eels, which I did not see coming. Geralt’s storyline introduced us to Jaskier – who’s the highlight of the episode – and the history of the elves, while Ciri’s plot mostly felt like filler unless Dara turns out to be a big character in this series.

I have a feeling that there’s going to be some more exposition-heavy episodes coming up as the creators are trying to jam a decades-long series of novels into an eight-episode season. I just hope that all this set up is leading us somewhere entertaining.