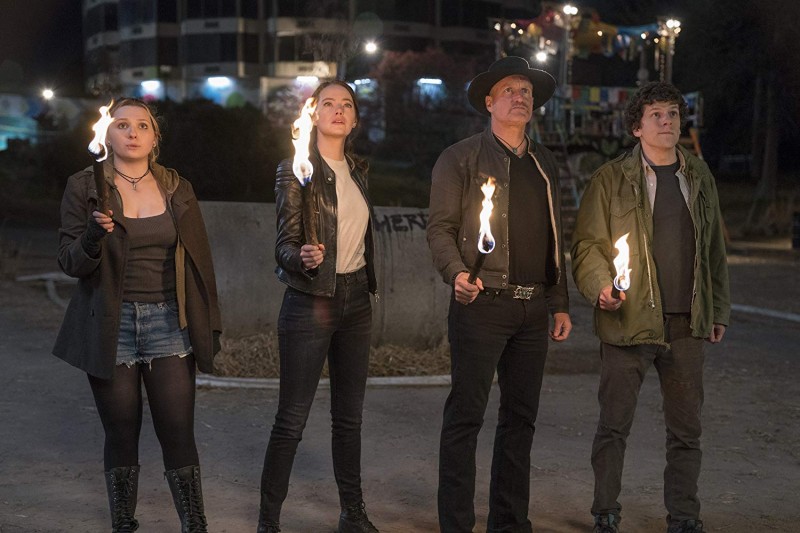 The 2009 comedy zombie film Zombieland had it all: Twinkies, clowns, even Bill Murray. Today, after 10 long years, we get a trailer for the highly anticipated sequel, Zombieland: Double Tap, and oh boy. There’s a lot going on.

The original cast of Zombieland returns in full force, and a whole host of new characters are unveiled. The trailer shows of Woody Harrelson back in the hat as Tallahassee, Jesse Eisenberg as Columbus, Emma Stone as Witchita, and Abigail Breslin as Little Rock (for those haven’t seen the original, the characters go by the names of their hometowns). However, the trailer also shows off newcomer Madison (played by Zoey Deutch) to shake up the dynamic of the little zombie-killing family.

Also unveiled in the trailer is Rosario Dawson, Luke Wilson, Avan Jogia, and Silicon Valley‘s Thomas Middleditch. Moreover, according to the IMDb page for the sequel, Bill Murray, who had a terrific cameo in the first film, and fellow Ghostbusters star Dan Akroyd are supposedly also in the film somewhere. Whether or not this is true remains to be seen.

The comedy takes the gang on a hunt to find Little Rock, who runs off with a guy she met named Berkeley. The trailer makes sure to show off the return of fun zombie-slaying action, and I for one can’t wait for this sequel. Zombieland: Double Tap comes to theaters on October 18.