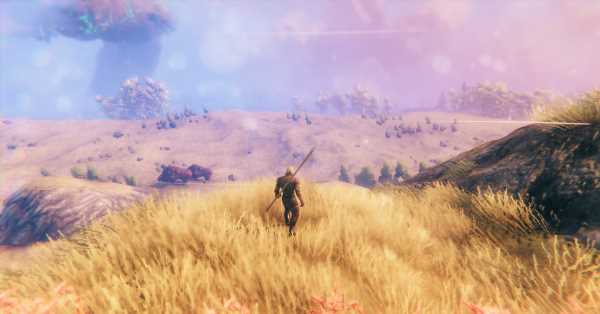 Valheim opens with a scrawl of red runes that slowly bleed into text. The Norse epic unfolds before you, as you are whisked away into another realm in the claws of a crow. Thunder and lightning sound around you before you are dropped into a familiar, yet somehow foreign, landscape. There is a sense of mystery and awe as the melodic score begins to play. You are here. You are in Valheim.

Yet despite all of these fantastical elements, Valheim remains grounded in a sense of realism that adds to the experience in tangible ways.

The game offers a clean blend of exploration, RPG elements, and a massive open world that somehow manages to feel organic. It seems to be the perfect storm, with four million copies already sold.

You arrive in the world as the reincarnation of a great warrior from another realm, set to do Odin’s task of ridding Valheim of terrible beasts that even the gods dare not challenge. Valheim encourages this practice, as defeating these bosses provides you with access to more tools to create better armor, housing, or even crafting equipment.

However, this act comes at the expense of the world itself. Each of these creatures exists within a specific biome — the meadows, the Black Forest, the swamps, the windswept mountains, and the plains — and in order to fight these beasts, you must kill their kin. And even after you’ve vanquished the “boss” of these individual areas, the game forces you to deal with those consequences in the form of world events.

My attempt to kill the great frost dragon Moder sent the drakes that occupied the mountains into a frenzy. There would be instances in which they would swoop down from their natural environment to attack a community house I had built with friends on a shared server. These events will continue long after you’ve defeated these ancient creatures who had otherwise existed peacefully until your arrival.

For example, I couldn’t have made a pickaxe without defeating the meadow god Eikthyr the Stag, as I required his horns to mine the earth for crude tin and copper. Progression without upgraded armor and weapons is almost impossible in certain areas, as the game begins to strand you in different areas, with biomes like the mountains requiring frost resistance potions to begin mining materials to gain more resistance to the cold when wearing certain armor sets.

A system of consequences

I felt a sense of wonder and awe when exploring the various biomes I found in the procedurally generated worlds. I often found myself lingering by empty shores occupied only by scattered trees and rocks, just staring into the distance while the sun sank over the horizon. There is something peaceful in the loneliness Valheim affords me, but it isn’t something that feels empty or hollow.

There is an attention to detail in the construction of the world that creates a deeply immersive reality—whether it be the act of adding proper ventilation to your home to avoid being killed by poisonous fumes, or the wind direction dictating whether or not deer and other wildlife will be able to sniff out your presence while you’re sneaking. Fantastical creatures can also be found in Valheim, with skeletons and Drauger appearing in the dreary swamps set at the edges of the Black Forest.

Valheim feels like it has more in common with early era MMORPGs like RuneScape or even Lineage II in its openness than it does modern RPGs, though it borrows similar ideas. The game offers a less traditional leveling-up system, in which players need to use items to increase their affinity with a particular stat.

If you want to level up woodcutting, for example, you’ll need to take up an axe and get to work. If you want to increase your blocking stat, then you will have to block attacks, or even punches from friends, in order to increase the efficiency of your shield blocking. Players can also increase their health and stamina stats using food items or potions.

I mostly spent time cooking and foraging for food, not interested in engaging in combat unless absolutely necessary. If anything, Valheim managed to scratch the itch for me that titles like Harvest Moon or Stardew Valley could otherwise no longer reach. While my friends fought packs of wolves and found krakens swimming between vast expanses of ocean, I practiced animal husbandry and farming.

Valheim’s world is low-poly for the most part, but features enhanced lighting and water refraction effects that create a beautiful blend of the early 2000s and modern graphics. Oceans and rivers look lovely, while even the dreariest of environments somehow stand out. Particle effects bloom and blossom in snowy locales, with dense fog sometimes permeating endless meadows of yellowing grass. It made me stop and appreciate the environmental design and procedurally generated scenery. This approach also allows for those even with fairly low-end machines to run the game.

Outside of the world actively fighting back against your intrusion and destruction, you can see the environment begin to change due to your work. Entire fields of grass are destroyed as you mine for valuable metals to make stronger armor, and forests shrink as you chop down trees to make sturdier walls to defend your home that otherwise shouldn’t exist.

This is in itself a depiction of colonialism and environmental degradation as you pillage a continent unknown to you for valuable materials to move elsewhere and do the exact same thing over and over again, until there is nothing left.

However, the player can still abstain from these actions. You could just live in solitude in the forests and meadows, enjoying a more humble abode in order to coexist with the creatures around you. A lot of my time in Valheim was spent fishing at the shores of a nearby ocean, and then cooking fish inside of my simple home. I only wanted to be there silently, listening to the sound of the water lapping against the shore or to see deer bounding through the forest as I clumsily approached them.

Forging a community oceans away

Eventually I buckled down and created a dedicated server for myself and my Twitch community. The online capabilities of Valheim are limited, with only ten players able to occupy a server at any given time, but they work just fine.

And with a recent update, players who were located in Japan were able to finally interact with players from Europe or North America without lag. Some of that lack of international functionality had created a greater sense of immersion while playing, though. One Japanese player on my server was, for the most part, unable to interact with us until recently, which meant we would see him sometimes in the distance, either hunting or at the lodge he had created in his own solitude.

Valheim can be a quiet place, if you’d like it to be
Image: Iron Gate Studio/Coffee Stain Publishing via Polygon

We would wordlessly trade items, since he couldn’t use item boxes if we were in close vicinity, or cross paths. And even though we could communicate in Discord, in the game itself we would simply acknowledge one another with a simple wave and hurry off in our own separate directions.

Stories like this make Valheim a memorable experience. I would speak about these instances with vigor and excitement, causing others to join my already robust group of players on the community server. We would interact and progress individually, sometimes meeting up at a communal house to share mead and food that I would cook for everyone.

Valheim is a game that comes around once every few years, cementing itself within the popular consciousness. However, it still maintains a kind of rigidity that relies on the player to engage in the gamification of colonialism to move things along. While it may have given me an option to refuse to engage with these mechanics, Valheim offered no true way around them. Continuing to engage with these systems and to feel the direct repercussions of destroying the environment feels intentional, outside of providing the player with another set of challenges to ultimately overcome.

This is a mechanic I have otherwise not seen used in similar games, and it manages to pose questions and challenge the player to look for other options — or to simply stop their “conquest” of Valheim altogether. Ultimately, I would have liked an option to choose to peacefully coexist with the inhabitants of the realm, and I hope that future updates allow for just that.

Either way, the social experience Valheim provides, or sometimes the lack thereof, is currently second to none. While it bears some similarities to multiplayer games that allow us to keep in touch with friends and loved ones who are far away, it also provides a way into the virtual outside world, to take walks in forests with people we enjoy or to create a curated community experience.

It is a combination of these elements that has made Valheim such a successful and enjoyable experience, one worth sinking hundreds of hours in.

Valheim is out now on Windows PC. The game was reviewed using a download code purchased by the writer. Vox Media has affiliate partnerships. These do not influence editorial content, though Vox Media may earn commissions for products purchased via affiliate links. You can find additional information about Polygon’s ethics policy here.