A single minor choice can have major consequences. This is especially true in games, where deciding to use your last bit of fuel in one level may leave you stranded and helpless several levels later. The best games make a meal of these choices, letting you maneuver around your missteps to try to come out the other side in one piece. Void Bastards is all about the choices you make, and how you react when things don’t go your way.

Former BioShock team members made Void Bastards, and it shows. Both games are about using the environment to your advantage, hacking turrets, crafting weapons, and employing stealth to overcome impossible odds. But beyond the similarities, Void Bastards evolves the format in unexpected ways.

Void Bastards is a first-person roguelike where you’re forced to explore dozens of randomly generated space stations in search of, well, mostly bullshit. The game is pretty open about this. At one point you need to find a new HR computer because the last one exploded when you turned it on. The doodads you collect to enable your escape from the galaxy aren’t really the point, though, and just serve to keep things light and breezy, even while you’re starving to death.

Void Bastards’ biggest asset is its randomness. Unlike the set-in-stone levels of BioShock’s underwater metropolis, Void Bastards’ boundless variety of miniature space stations have their own layouts and unique variables. These require some cleverness to overcome or use to their greatest advantage.

One of the earliest stations I encounter is filled with pools of radiation, requiring that I sprint and jump to avoid taking long-term damage. Another has lost power, forcing me to maneuver through darkened hallways to reach the power switch and bring the station back online. This, of course, activates an array of security measures, and I’m instantly beset by unhappy robots.

But it’s not all bad; the randomness can sometimes be a boon. Before docking into one station, I am alerted that there will be friends onboard. One of the potential station variables causes a single enemy type to be friendly to the player, and it just so happens that this station has only one enemy type on board, instead of the usual one or two to contend with. In this case, it’s a small alien monster called a Juve (as in juvenile), who moves fast and can usually swarm me in seconds. But on this station, all the Juves are allies, following me around like mice behind the Pied Piper. It’s glorious. 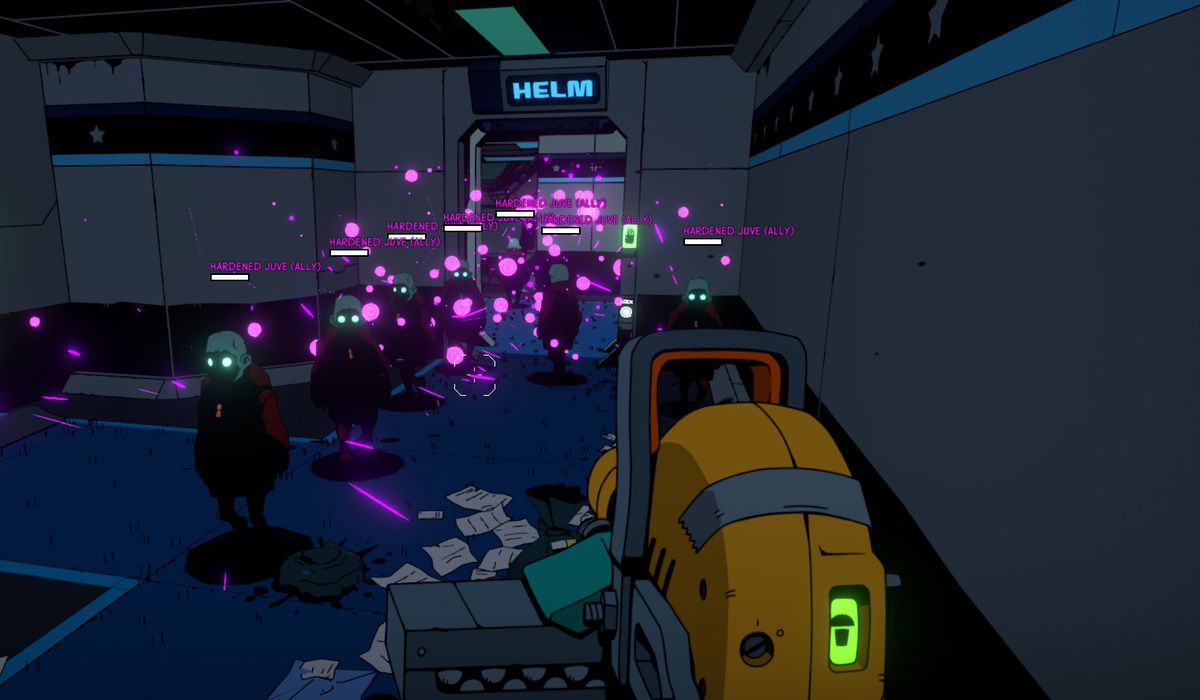 Deciding where and when to dock is crucial in Void Bastards. A star map between levels shows potential stations to travel to. Each jump my ship makes uses up fuel and food, which I need to scavenge from cafeterias and engine bays on various stations. I’m often forced to make a tough choice, docking with a station filled with terrible variables because the alternative is to starve to death.

Death in Void Bastards isn’t something I strive for, but it also doesn’t mean I have to start from scratch, as in a typical roguelike. Dying means that a brand-new prisoner body is “rehydrated” by a droll computer AI with a posh British accent. I become that new prisoner, with different skills and weaknesses. After my fifth death, I became a savvy turret hacker … who also happened to be a smoker, causing me to inadvertently cough and reveal my position every few moments.

And sure, I lost most of my food and fuel, but the major discoveries I had made, such as unlocking advanced weapons and passive skills, remained with me. It’s a brilliant system that encourages cautiousness without feeling like a total kick in the face when things don’t go to plan.

There are a few times, though, when the game could be more explicit about certain scenarios. Space whales (yep) float around to random space stations whenever you travel. Landing on one yields instant death, unless you’ve stumbled across a torpedo in your journeys. That’s a mistake that only happens once, granted, but the randomness of their movements and the lack of telegraphed danger can be a little hard to stomach if you’re happy with your current loadout.

The purpose of all of this is to travel the galaxy collecting various doodads for the aforementioned posh AI. One of the earliest tasks is to forge an ID card so that I can activate the faster-than-light drive on my home ship. Once accomplished, the AI informs me that 16 days have been knocked off my sentence for my heroism, which almost makes up for the additional days that have been added for forging an ID card.

This sort of dry, Douglas Adams-esque wit permeates through Void Bastards. Even the enemies take on the personalities you’d see waiting in line at an interstellar DMV, grumbling about the quality of the coffee as they fire laser beams in your direction. 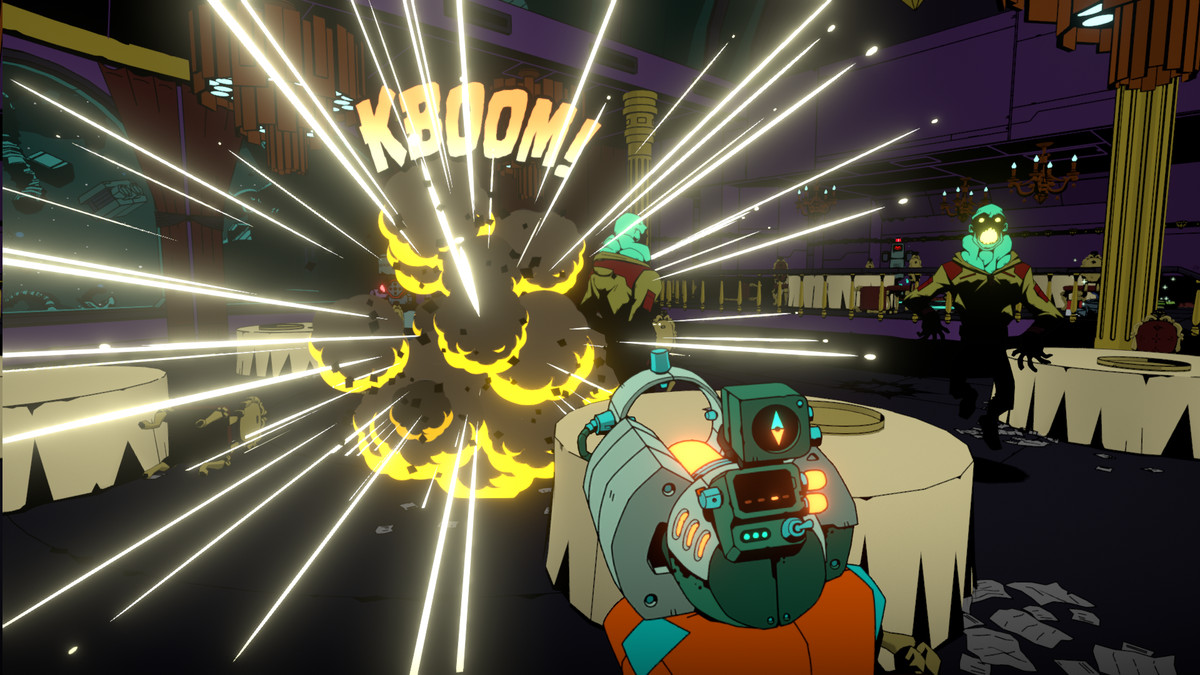 This unexpected cast and world is brought to life through a comic book art style that’s wholly unique. Cel-shaded games had their heyday back in the early 2000s, but Void Bastards takes the look even further. The enemies are actually presented as flat, 2D panels floating and shuffling through these space stations, like a twist on the flat enemies of the Doom era.

While this may have been a development concession, the flat, hand-drawn art style of the enemies actually pairs perfectly with the game’s cutscenes, which use the same high-contrast, Spaceman Spiff-ish look. It all combines to feel like it’s a cohesive world, rather than jumping back and forth between two disparate art styles.

The magic of Void Bastards is that, while it’s scary and dangerous and random, it’s also within my control. When I decide to spend my last bit of food to heal myself up before a big fight, I know that I’m giving myself a new task: Find more food or else. When I spend credits to hack a turret, I know that I may stumble on a rare item cache where that money could’ve been better spent.

And yet I’m fine if these choices don’t quite pan out. My brand-new floating corpse is part of the matrix that makes these choices matter. And the next re-hydration is just a click away.

Void Bastards is being released May 29 on Xbox One and Windows PC. The game was reviewed using final “retail” PC download codes provided by Humble Bundle. You can find additional information about Polygon’s ethics policy here.