I am not an expert at video games, but as I have worked in the creative industry for over 30 years, I know and appreciate great design. I’ve found a perfect match with Yoshi’s Crafted World. The game itself may seem easy or even childish to jaded players, but it gave me a special opportunity to appreciate the beautiful design that can often be found in modern Nintendo games.

Yoshi’s Crafted World contains its premise in its name. As Yoshi, I hop around a variety of worlds filled with creatures and backdrops “crafted” from paper, cardboard, wood, sticky tape, plastic, and other common household items such as bottle tops, soda cans, pingpong balls, and even plastic drinking straws — no plastic straw ban in Yoshi land. 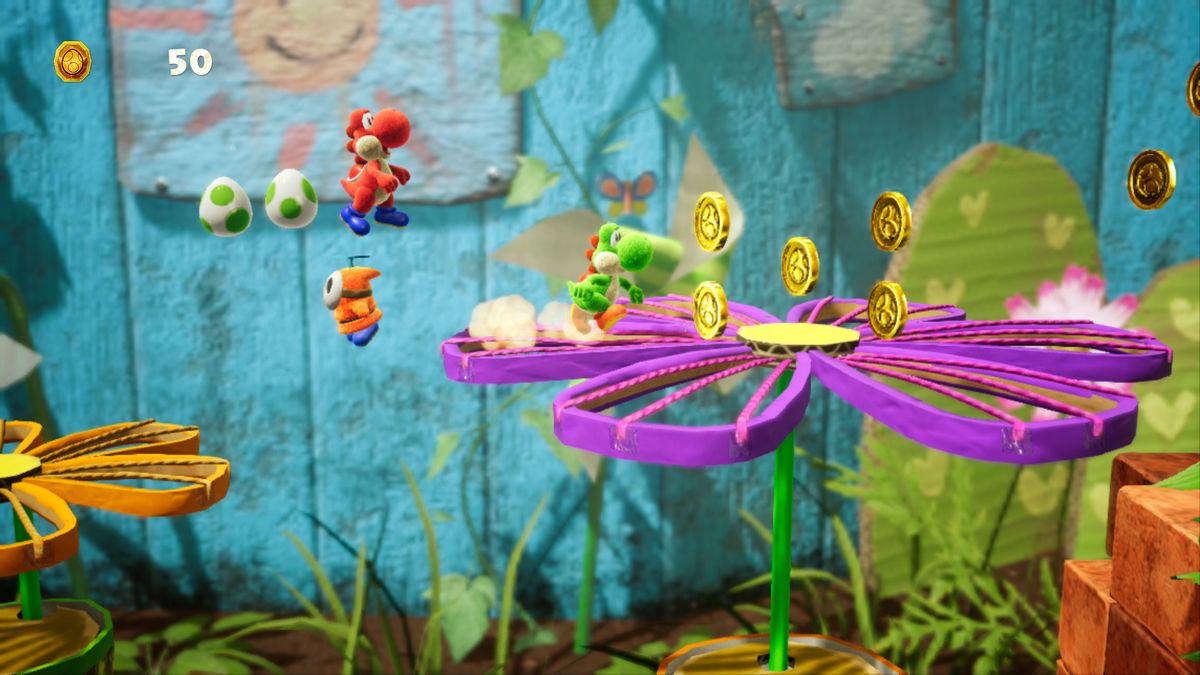 In one stage, origami flowers are “cut” from corrugated cardboard and finished with painted string. They wave back and forth between painted cardboard bushes. In another stage, Yoshi builds a train using an iced coffee can and some cardboard wheels. A tea light candle burns gently beneath the can to produce just enough steam to propel the little craft.

A lake of magma comes complete with geysers of lava that look like they have been fashioned from liquid candy. A forest of wooden twig trees with paper leaves has cardboard bridges that swing up or down when Yoshi drops an acorn into one of the two string nets hanging beneath. A plane made from a painted cardboard tube, using what I assume are lollipop sticks for a propeller, flies through crushed paper clouds. It goes on and on. It’s not just that the design of each item is beautiful; the trick is that you can see how each one was “made” using household items.

All of this superb creative work means that I have been playing the game slowly, carefully, and in a constant state of joy. I find myself looking forward to each new world to see how Nintendo’s designers have recycled these “crafted materials” in new and imaginative ways. I’ll sometimes replay older stages before moving onto the next one, just in case I missed anything.

Yoshi’s Crafted World is a game that prizes tiny creative decisions, catering to an audience that will look for them.

We usually look at characters and items in video games as completed things, and we judge how they look in those terms. But the developers of Yoshi’s Crafted World spent so much time modeling the materials that make up each item that it’s fun to figure out how each item was built, and then pick out the details. The game’s crisp, bright lighting design makes it easy to see all the work that went into the “crafting.”

Cardboard has relief and imperfections. Occasional scraps of paper and cardboard have printed text, which is especially noticeable when playing the flip side of a stage, that give the impression that this particular piece was cut from an old cereal box. Yellow gaffer tape has a plastic sheen, the printed names on the metal soda lids look old and faded, wooden twigs have grain, and aluminum cans are scratched and dull. 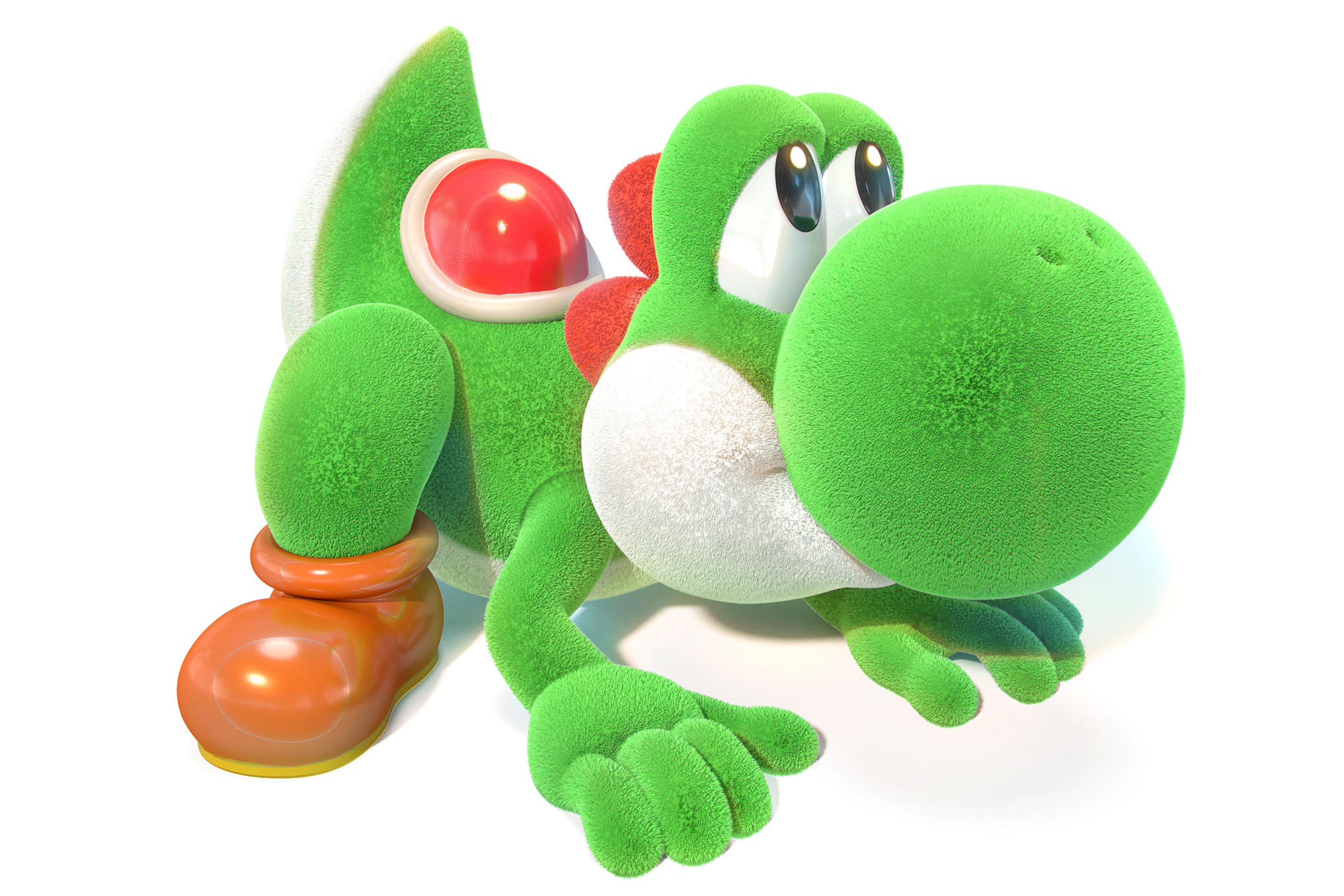 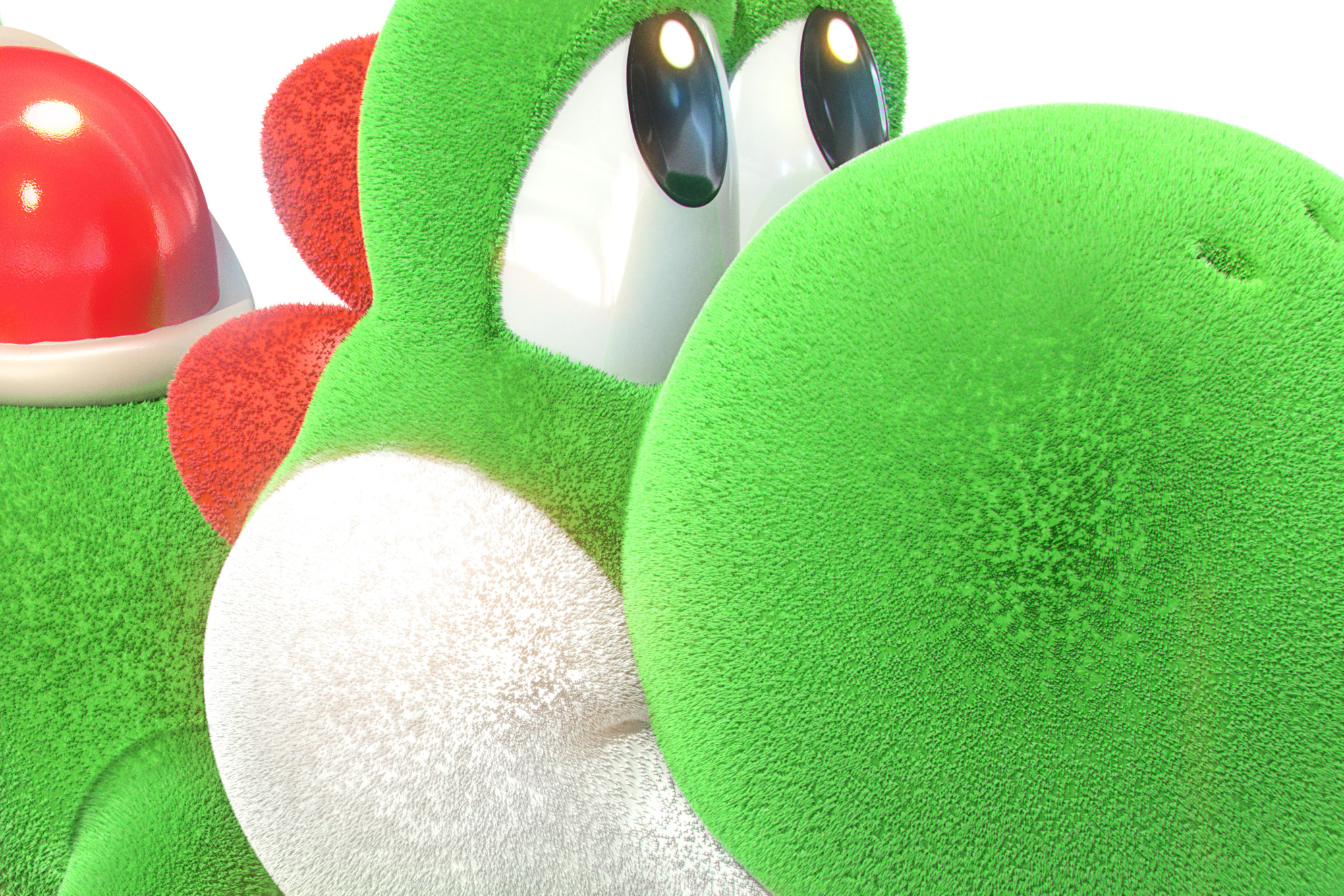 Yoshi and the other characters in the game are “made” of felt. Or at least I think it’s felt. I initially thought the texture was a kind of foam. My Polygon colleagues were also split on whether it looked like foam or felt. Some even thought that Yoshi’s texture was neither, and looked more like velour, or velvet, or even, possibly, microsuede.

The fuzzy felt texture distinguishes Yoshi and the other principal characters from the crafted world they inhabit. Nintendo’s designers haven’t mixed their metaphors; cardboard, paper, brushed metal, cloth and wood are used for the set, while shiny hard plastic and precious metal is used for the items you collect. It’s akin to theatrical technique, and helps me to know what is what at a glance.

In fact, “theatrical” is a word that I would use to describe this game in its entirety. The different worlds each look like a puppet theater set built by children for their toys. Or maybe it’s a shoebox diorama. I get the feeling that action in Yoshi’s Crafted World is all taking place on a kitchen table or a child’s bedroom floor.

But it’s not just the consistent scale that makes these sets so convincing, they also have a fabulous sense of depth. Yoshi is confined to moving left, right, up or down in the majority of the stages, but the set occasionally opens up and allows me to move upstage (toward the background) or downstage (toward the screen), giving me the opportunity to pass through doors or behind scenery to find more coins or smiley flowers. 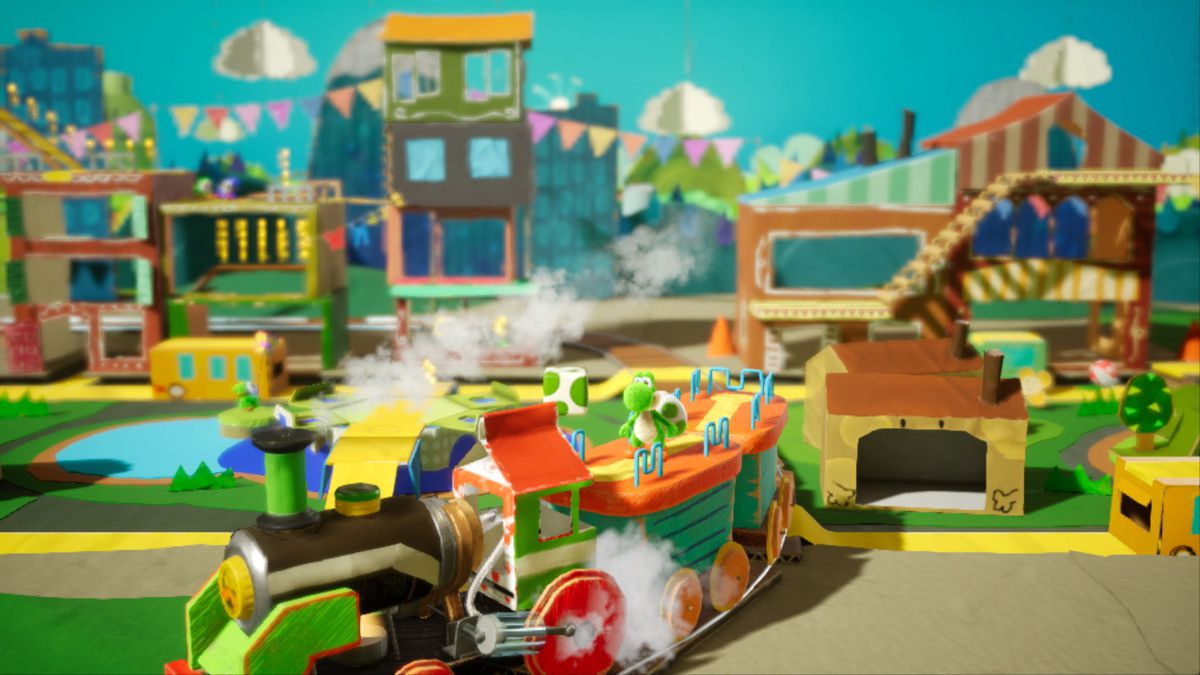 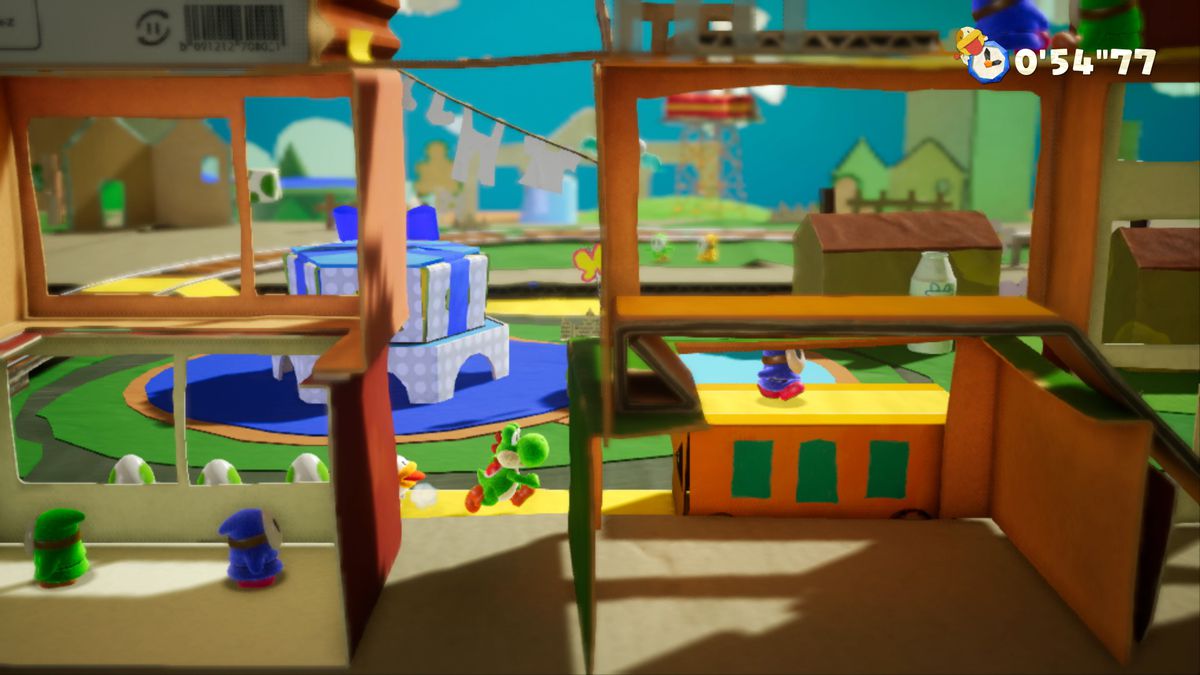 What makes this movement so impressive is the use of follow focus, a photographic term that describes the technique of continuously focusing the lens to keep the subject sharp as it moves toward or away from the camera. For example, the focus shifts with Yoshi as I move toward the back of a set, dropping the foreground out of focus and moving to the background where clouds and textures become sharp. The opposite occurs if Yoshi moves back toward the viewer.

The follow focus effect is particularly apparent when targeting an egg on a cloud, mole, or airplane full of Shy Guys. Once you move the crosshairs over a target, that target snaps into focus. If you move off that target, it becomes soft again. Yoshi’s Crafted World is certainly not the first or only game to use this technique, but its use is highly effective in making me feel as if everything in this space is a seemingly real three-dimensional object crafted from paper and cardboard, and not a flat two-dimensional virtual world.

I appreciate this game for what it is: a beautiful example of exemplary creative direction and technical execution that never gets in the way of the simple enjoyment of playing a great game. And likewise, and perhaps more uniquely, the game itself never gets in the way of me enjoying the world. It’s easy, sure, but perhaps a better descriptor is “comfortable.”

Here is a beautiful, handmade world. Enjoy it.