Euro Truck Simulator 2 is one of the greatest video games ever made, and I say that without a trace of irony. Niche subject matter aside, it's just an exceptional driving game, with a vast and seamless open world to explore, weighty, nuanced handling, and a laid-back pace that is utterly transfixing. Even if you don't care about trucks, trust me: make time to play it, even if it's just the free demo on Steam. You'll be amazed at how enjoyable these long, largely uneventful cross-country drives can be.

I play Euro Truck Simulator 2 to relax. When I'm driving at night in the rain, watching the wipers swish back and forth, it's hypnotic like nothing else I've played. Behind the virtual wheel of my truck, safe in my warmly lit cabin, the troubles of the world seem very far away. People often talk about cosy games, and ETS2 is the epitome of that concept for me. But that doesn't mean things can't go wrong. It's rare, but there is danger in the game—and it can creep up on you when you least expect it.

It all started with a few tonnes of chemicals. I was hired to deliver this volatile, oversized cargo from Dresden to Paris, which should have been an easy job. Just a short hop over the border and back in time for tea. But before I'd even reached France, my truck was badly damaged due to some careless driving on my part. I think I was trying to simultaneously watch an episode of something on Netflix, which is a very bad idea for anyone in command of a large, dangerous heavy goods vehicle.

When your truck takes severe damage in Euro Truck Simulator 2, there's a chance your engine will randomly cut out. Because you spend so much of your time in the game on long, straight, brightly lit highways, it's never that big of a deal. You can usually just restart your engine and keep driving till you reach the next service station. But a bad engine is a very different story when you're on any other kind of road—especially the narrow, twisting country lanes that litter the French countryside.

When it gets dark in ETS2, it gets really dark. This is one of the few video games where the night time is as dark as it should be, rather than just a very heavy shade of blue. I learn this the hard way as I'm dragging this immense trailer filled with dangerous chemicals down the tightest, narrowest country road, and my knackered engine decides to repeatedly shut itself off. When it does, the headlights blink out, and I'm suddenly plunged into an inky black darkness. The road ahead just disappears. 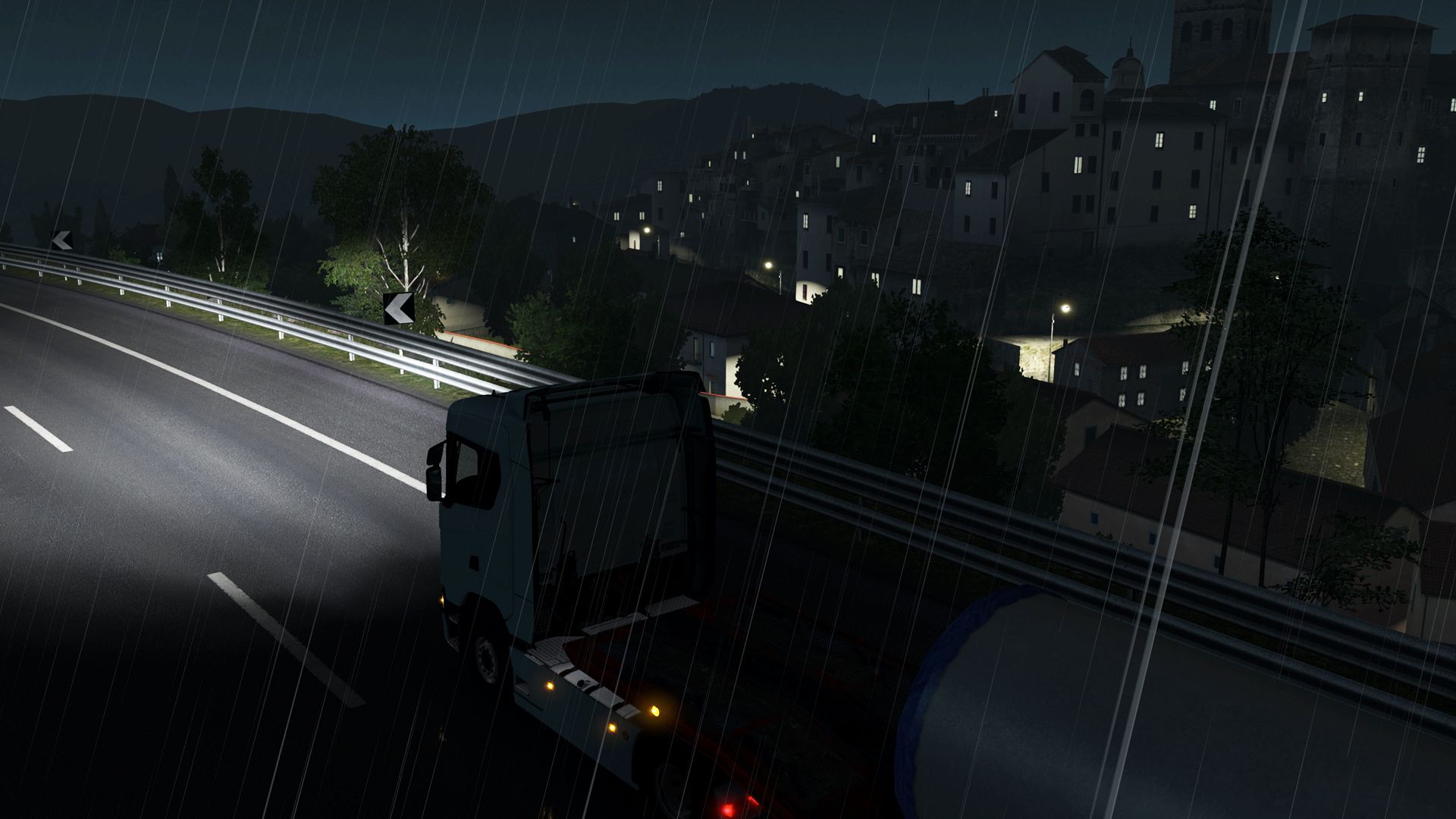 So not only do I have to navigate this unwieldy vehicle and its oversized load along the road like I'm threading a giant, gas-guzzling needle, but I have to intermittently do it without any idea of when the next turn is coming. It's one of the most intense, nerve-racking experiences I've ever had in a video game, which isn't something that's often said about a mundane simulator. I was only on the road for a few minutes, but at the time it felt like I'd never make it back to the highway.

I made it to Paris on time, but was fined for my sloppy driving. I'd say 99 percent of my 200+ hours with ETS2 has been completely serene and tranquil, which makes this brief moment—which happened years ago—stick in my mind. This is a game so uneventful and sedate that even the slightest flicker of excitement or stress is amplified by a thousand. I've played countless horror games over the years, but this random French backroad had my heart racing more than any of them.